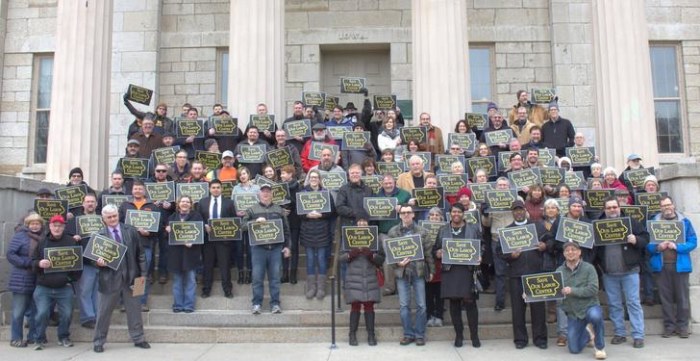 What’s happening with the University of Iowa's Labor Center?

Since Bleeding Heartland covered the planned closure of the University of Iowa Labor Center in July, much has happened regarding the center's fate and future. Public reaction against its demise has been swift and sustained, coming not only from traditional beneficiaries of the Labor Center, but from UI students as well.

As a brief recap: the University of Iowa announced its intention to close the Labor Center on July 10, as part of a series of mid-year budget cuts, in light of continually decreasing appropriations from the state legislature. Since its creation in 1951, the UI Labor Center has specialized in providing research, training, and education on issues facing Iowa workers.

Examples of their work include educational programs in 70 of Iowa’s 99 counties on topics such as non-discrimination law, combating sexual harassment, and collective bargaining, as well as recording the past struggles of Iowa’s workers, such as miners and teachers, through the Iowa Labor Oral History Project. It is the only component of Iowa’s public universities dedicated to education and research on labor issues and workers’ rights.

Between August 14 and September 10, seven public hearings were held across Iowa, collecting public input that was ultimately sent to the Iowa Board of Regents. I had the honor of serving as a panelist during the final hearing in Iowa City. There, I heard from people of all sectors of society, from immigrants, union officials, University faculty, and students the benefits the Labor Center provided them, including safety training, tools to break down class, racial, and gender barriers, as well as the means to create a decent standard of living though honest work.

Students at the university have also taken up further action in support of the Labor Center and its mission. Contrary to one of the administration's original talking points, many students’ concurrent status as workers and students has not been lost upon them. I wrote this in an editorial for the Daily Iowan, the University of Iowa’s student newspaper, in late August:

One of the largest implications of the university’s justification to close the Labor Center is that students and workers are mutually exclusive. This is simply not true. Thousands of UI students are workers themselves, in food service, retail, as TAs, and more, often in precarious, low-wage positions in which they are vulnerable to exploitation. Moreover, the title of “student” should not just be limited to those seeking degrees or those ages 18 to 25.

It is true that the Labor Center’s 2018-19 course schedule often covers material not necessarily related to traditional coursework, such as rail safety, labor law, and union-leadership training. While these courses might not place people on the track to finishing a degree audit, it gives Iowa workers the tools to help combat unsafe working conditions, bargain for better wages, and, in some cases, save people’s lives.

To essentially call people who are seeking nontraditional classes nonstudents is demeaning and patronizing, and it ultimately highlights the growing divide between a more prosperous professional class and a struggling working class.

Students have spoken at hearings, held rallies, met with administrators, and delivered letters to the president’s office in support of the Labor Center, its mission, and its continued presence within the university. On October 30, the University of Iowa Student Government voted in favor of a resolution opposing the decision to close the Labor Center and recognizing the benefits it provides to the people of the state of Iowa.

Although university administrators have been willing to meet with students, accommodate their requests, and discuss their positions and point of view, their official position on the center’s planned closure has shifted quite a bit since July. As mentioned earlier, the university initially said the goal was to focus resources on on-campus student instruction. Per the Office of Strategic Communications’ July 10 press release, "UI administrators ... determine[d] which activities could be trimmed without significantly harming the university’s academic mission or student success."

Administrators repeated that line during initial meetings with students in August, emphasizing the notion that the Labor Center consumed undergraduate tuition dollars without providing any tangible benefit to them.

By October, the president’s office had changed its stance. The new official line: the Labor Center was irrelevant to undergraduates, as it was part of the College of Law, which would retain its funding post-closure. Putting aside the fact that this new position negated months of posturing, this claim was also disingenuous. Administrators acknowledged that none of the "savings" from closing the Labor Center would be used for undergraduate services. For some perspective, it should be noted that the Labor Center’s current allocation of funding consists of $557,000 out of a $745 million general education fund (GEF), or just 0.007 percent of the total GEF.

Students have not been the only ones at the UI who have objected to the university's conduct throughout this process. The UI Faculty Senate issued a statement in late September criticizing the failure to practice shared governance in creating the list of center closures and announcing them back in July. The Faculty Senate noted, “the administration largely ignored the opportunity to solicit meaningful input by faculty and other key stakeholders," and had acted without transparency and proper communication between different components of the institution.

This failure to follow principles of shared governance is particularly egregious, given that 30 staff across various centers in addition to the Labor Center risk losing their jobs because of the planned closures. In addition, the deans and directors of labor education centers at eight out of eleven Big 10 universities, including Illinois Urbana-Champaign, Minnesota, Wisconsin, and Nebraska, addressed the issue through a letter in support of the UI Labor Center. Excerpt:

The [University of] Iowa Labor Center embodies the objectives of a state university by serving all segments of the people who live and work in Iowa [...] We therefore, call upon the UI administration to demonstrate your commitment to the mission our venerable institutions share and appropriately support the Labor Center.

On a brisk Monday morning, December 3, Iowans from all walks of life came together at the Old Capitol building in Iowa City for a statewide summit on the future of the Labor Center. UI students, state legislators, local officials, union leaders, representatives from faith-based and civil rights groups, as well as other community leaders, all joined together in the common cause of standing up for workers’ rights.

Summit attendees called upon the University to not only pay lip service to the Labor Center's mission, but also to make a firm commitment to upholding the services by restoring the center's funding. More than five months after the impending closure was announced, it is clear that Iowans have not given up on the Labor Center. Far from it - they are doubling down against the degradation of workers’ rights and the dismantling of public higher education that this state has witnessed in recent years, and will continue to witness in coming years if action is not taken.

I want to make very clear that this is a complex and multifaceted issue. The root cause is continually declining state appropriations for Iowa’s public universities. It is almost certain that tough spending decisions will have to be made in the future.

But ultimately, the same message from July remains true: the Labor Center's contributions, including protecting workers' rights and recording past struggles, far outweigh its relatively small impact on the university budget. Arguing over the semantics of axing workers’ rights, versus merely readying the ax to make the final swing, distracts from a larger point: cutting the Labor Center, along with Iowa’s public commitment to supporting workers’ rights, is the wrong move not only for the university, but for the whole state.

Austin Wu is from Cedar Rapids and is a third-year student at the University of Iowa currently majoring in Public Health with minors in Political Science and History.