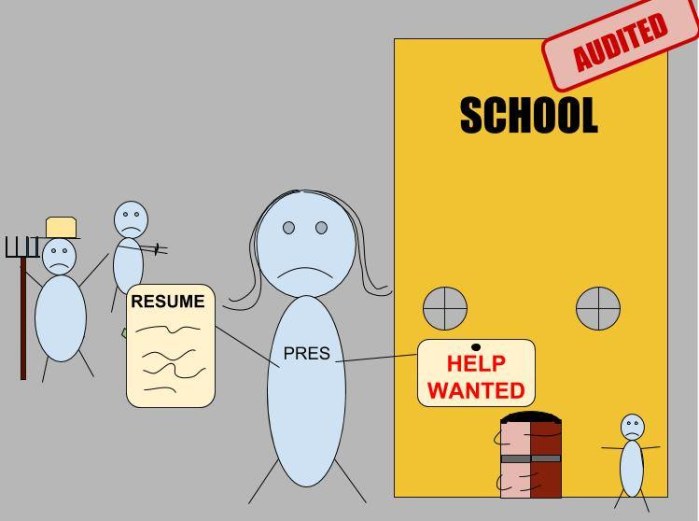 Do Waukee schools have revolving doors?

Clive resident Tyler Higgs was a candidate for the Waukee school board in 2017. -promoted by Laura Belin

Former Waukee school board president Susan Bunz applied for a district job in the same month she voted to create the position, according to a spokesperson for the district.

Bunz served as board president at the time of the vote and job application. The job she applied for had duties similar to a Human Resources Director position that Bunz had voted to eliminate one year prior. The former human resources director received a $985,000 settlement after suing the district for alleged wrongful termination. Here is a timeline of relevant events:

June 12, 2017: The Waukee School Board, with Susan Bunz as board president, voted unanimously to confirm a consent agenda that resulted in a reduction in force, eliminating the position held by then Director of Human Resources, Terry Welker.

January 22, 2018: The district agreed to a $985,000 settlement with respect to a wrongful termination suit filed by Welker.

June 11, 2018: Almost exactly 1 year after eliminating the Director of Human Resources position, the Waukee School Board, with Susan Bunz as board president, voted unanimously to create the position of Executive Director of Personnel.

During this same school board meeting, the school board voted to approve a Meals from the Heartland grant application. Bunz had already signed the application on May 31, prior to board approval. According to the State Auditor’s report, Bunz also served as executive director of Meals from the Heartland and should have recused herself “from the related discussions and votes.”

June 13, 2018: The position of Executive Director of Personnel was posted. Interestingly, the job required a “Juris Doctorate or related experience.” Susan Bunz has a Juris Doctorate degree. The district took down that job posting a few weeks later.

November 26, 2018: The district posted the Executive Director of Personnel position again, with November 30 as the closing date and one of the requirements as, "Juris Doctorate or related experience in Human Resources." The district later took down that listing and posted the job again, without a law degree as a requirement.

December 2018: In response to my public records request, a spokesperson for the district confirmed, “Ms. Bunz did apply for the Executive Director of Personnel position with Waukee CSD in June 2018.”

I reached out to Bunz to see if she could offer more information or context. She provided the following written statement:

“Nothing more- I initially thought that with my skill set and knowledge of the district and education I might be a good fit- I later changed my mind. Nothing more to the story than that.”

Editor's note: Citing sworn depositions, Kim Norvell reported for the Des Moines Register on January 7 that when Waukee school board members voted in July 2016 not to fire chief operating officer Eric Rose, they knew more about his misconduct than they have publicly admitted.