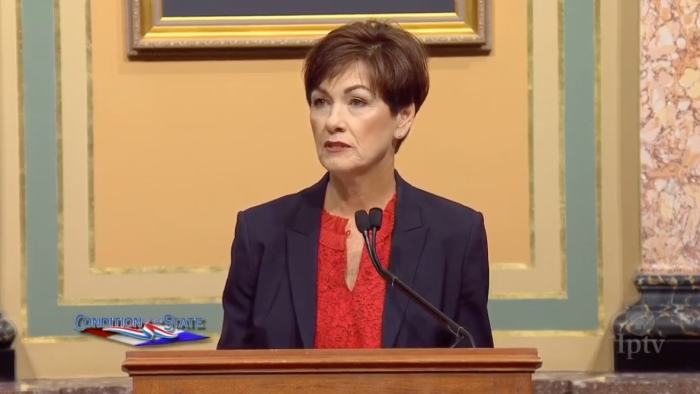 Governor Kim Reynolds’ Condition of the State address had precious little to say about Iowa’s economy, which is odd because that is something her predecessor and mentor always liked to crow about. She acknowledged that there are challenges for rural areas and that there are ongoing initiatives to promote training and placement of workers, but really said nothing about how the Hawkeye state is performing economically.

There’s plenty to say. Some of it good, some bad, and given the impacts of the President Donald Trump’s trade disputes, lots of ugly.

Let’s focus first on positives. Overall, the state’s nonfarm economy is improving. During all of fiscal 2018, the state posted, on a continuous year over year basis, job growth that was less than 0.5 percent. As of October and November of 2018, however, annualized growth had climbed to 1.0 percent.

Iowa’s construction, transportation, and warehousing sectors also grew smartly this past year, and when you combine all of the goods producing and transportation sectors together the prospects for blue collar employment improved markedly. Importantly, a good fraction of the gains were in Iowa’s nonmetropolitan areas that have yet to recover all of the employment they lost during the Great Recession.

We also had decent growth in finance and banking, in a wide range of professional and business services, and in health care. These are all industries that demand college educated workers, and the vast majority of this growth was in metropolitan counties.

There are sectors, however, that shed jobs last year. The greatest losses were in retail. The latest published data indicate a 7,100 drop in jobs on a year over year basis – a 3.8 percent reduction. On-line sales, continued concentration of retail in larger communities, as well as technological changes in retail all contributed to these declines. Sharp employment declines, too, were realized in the state’s hotel and motel sector and in dining and drinking establishments.

Overall, Iowa added more jobs with average to above-average pay than below average pay. Predictably, the pace of job gains in its metro counties was twice the rate of improvement in its non-metro counties.

Iowa’s farm sector has been hammered by a combination of production success and by extraordinary bad luck on the policy front. Robust harvests have generated grain and soybean supplies in excess of growth in world demand, which have suppressed prices.

But just one year ago Iowa farmers were hopeful that there would in fact be an expansion in soybean purchases from China and other markets, which would boost prices. Iowa pork producers and processors were also anticipating continued to growing demand for pork products, again mainly from China. Expectations in January 2018 were for a brighter farm sector outlook given the beatings it had taken in the previous four years.

Trade actions initiated by the U.S. against China regarding first solar panels and washing machines, followed by steel and aluminum tariffs, and then expanding rapidly to cover a wide array of other products and concerns resulted in retaliatory tariffs by China. The most notable for Iowa were those affecting soybeans as well as pork products and ethanol.

As a result, hopes for improvements in Iowa’s farm sector were dashed, and a bad situation was made markedly worse as demand for Iowa exports collapsed.

A team of economists at Iowa State University (including me) analyzed the potential losses and projected the impacts of these trade actions. After considering the post-tariff federal bail-out that will be doled out to lessen losses in agriculture, Iowa’s farm sector could see reductions in sales of from $1.13 billion to $1.67 billion, which would translate into lost incomes to farmers and to workers of from $245 million to $364 million if the disputes lasted a year – a likely prospect.

These trade actions affect more than the farm sector. That same ISU report showed that while the tariffs on steel and aluminum might boost primary metals production in the state, they would result in negative outcomes for other manufacturers. Under one scenario, manufacturing sectors like primary metals and others that would be benefit from the tariffs on Chinese goods would see combined Gross State Product (GSP) gains of $55 million during the first year of the trade actions. But Iowa’s remaining manufacturing sectors would see $149 million in losses in GSP – one step forward and nearly three steps back.

No state has been affected by the trade actions as much as the state of Iowa. And while goods production has improved, one is left to wonder how much better the state’s economy would have been had there not been trade sanctions against China and the predictable ratcheting up of mutual antagonisms.

Might Iowa’s farm sector have turned an important corner after years of struggle? Might Iowa’s manufacturers’ competitive positions improved even more? And might the prospects for nonmetropolitan Iowans and the communities in which they live have been brighter?

One thing is certain, actions at the federal level are harming a large number of Iowans, limiting the state’s potential prosperity, and promise to continue so as long as President Trump relies on bluster and brinksmanship instead of sober, level-headed trade diplomacy.

Iowa’s governor missed a perfect opportunity to send that message where it needed to be sent.