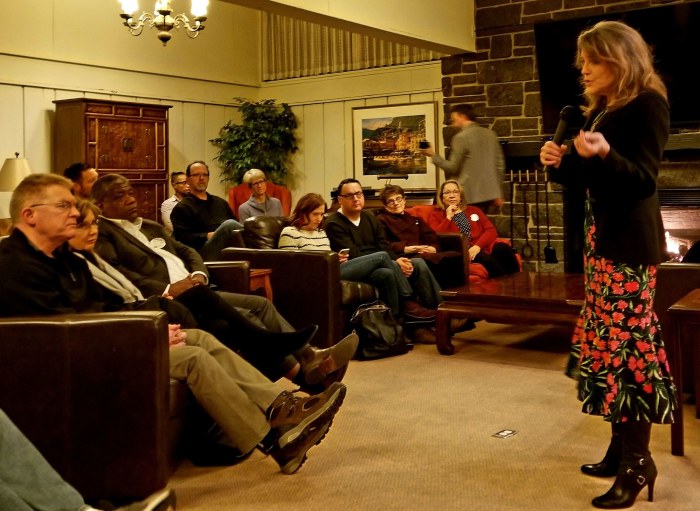 Marianne Williamson commands a room with the acumen of a megachurch preacher. The guests at her meet-and-greet February 1, many of whom admitted to being Williamson fans long before she declared her intention to seek the Democratic presidential nomination, were ready to give witness.

“We have a 40-year record of an economic monstrosity that has affected the sinews of our civilization,” she told a room full of about 50 Des Moines residents who gathered to hear the woman described as “Oprah’s spiritual guru” explain why she was running.

She spent about an hour and a half explaining why she believes traditional politicians on both sides have “gobsmacked” America, causing us to lose sight of our original purpose. Evoking American history — “FDR said the primary responsibility of the president is not administration but oral leadership,” she claimed he said — she exhorted the roomful of mostly women, mostly fans of her 32-year career of self-help and spiritual guidance, to work together for the “rising up of the American spirit.”

Williamson admitted that her pox-on-both-parties condemnation of the American condition was similar towhat other Democratic White House prospects are saying, particularly Senator Bernie Sanders, who has not yet declared a second run for the White House, and Senator Elizabeth Warren, who has announced her first. But she subtly dissed them by asserting that career politicians who got us into where we are today can’t be counted on to get us out.

“Experienced politicians led us into Vietnam,” she declared. “They led us into Iraq. They led us into Afghanistan. And they led us the economic disaster” that began 40 years ago, defined by massive wealth inequality and oligarchy. “We are in a veiled aristocratic system that America was created to repudiate,” she asserted.

She exhorted the room to work for “a new birth of freedom” for America, and reiterated her headline-generating proposal of restitution for African Americans to compensate for the lasting impact of slavery. But many other of her campaign issues are far more conventional. On her campaign website you can read about modest proposals to reinstate Obama-era restrictions on allowing mental-health patients to purchase firearms; rely on “peacebuilding,” which she explained was simply increased use of diplomacy; and transitioning to eco-friendly fuels.

I was impressed with her passion for restoring what made America truly great — a devotion to the fruition of each individual without regard for gender, religion or political bent. But what she will need to develop, as the campaign wears on, is how she intends to accomplish as president what she wants to have happen. And why people should place their trust — again — in someone who seems to be all about . . . dare I say it . . . draining the swamp.

Top image: Marianne Williamson addresses a questioner at a meet-and-greet on February 1 in Des Moines. Photo by Ira Lacher, used with permission.