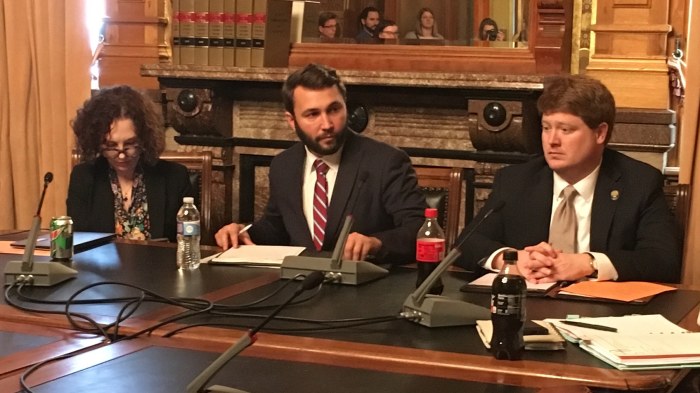 On acknowledging victims as we reform felon voting restrictions

Despite record low temperatures outside, the room was packed for the January 31 Iowa House Judiciary subcommittee meeting to consider House Study Bill 68, a constitutional amendment proposed by Governor Kim Reynolds.

An unusually diverse coalition is lobbying for restoring voting rights to Iowans who have completed sentences after felony convictions. At the subcommittee meeting, more than a dozen speakers urged lawmakers to support the proposal, including representatives from the Koch-funded Americans for Prosperity, the NAACP Iowa-Nebraska, the social conservative group FAMiLY leader, and the American Civil Liberties Union of Iowa. No one spoke against the constitutional amendment.

All three members of the subcommittee–Republican State Representatives Bobby Kaufmann and Dustin Hite, and Democrat Mary Wolfe, a leading voice on this issue for years–voted to advance the proposal to the full House Judiciary Committee. Kaufmann commented, “This is the single most unique group of advocates I’ve ever seen on a bill. I think that’s extremely indicative of how important this is to so many people.”

One concerned voice was Heather Strachan, a survivor of domestic and sexual violence who has worked with both victims of violent crimes and citizens re-entering society following incarceration. The authenticity in her voice was as clear as the pain that echoed in her words. Excerpts from Strachan’s testimony:

I certainly appreciate the concern and the comments that I heard regarding HSB 68 that we want to take into account the rights of victims and victim safety [a reference to Karl Schilling, who had spoken on behalf of the Iowa Organization for Victim Assistance]. However, they are not mutually exclusive.

To attach restitution repayment [as Schilling suggested]–while a noble proposition–does nothing to increase my safety or further my interests. My perpetrator will likely never see justice for their crimes against me. So I certainly understand the reaction of wanting to take away the power that I felt I had taken away from me.

However, having worked with re-entering citizens, I know that many of them–considering the state of mental health services in Iowa–have gone to prison because of behavioral health issues and impulses that they have not had a chance to seek treatment for or receive the proper treatment that could help them stay in their communities. […]

So I am in full support of restoring, automatic restoration of rights to vote for former felons.

Some things to consider as we debate what is redemption and what is justice:

It is important for us to understand that restoring one of the most fundamental rights in our democracy, the right to vote, does not diminish any victim’s pain and outrage. It is a recognition that we believe in redemption as well as justice.

Most people with felony convictions have been victims themselves at one time or another. When you are young and boundaries aren’t taught–or worse, broken–your sense of right and wrong can be skewed. That can lead to poor choices and sometimes felonies. This does not excuse the crime, but it is valid to weigh the circumstances that led to the crime, along with the penance served to atone for it.

The Iowa Constitution states if you commit an “infamous crime” you lose your voting privileges for life. Infamous crime was defined in a 1994 law to mean any felony. That covers a lot of ground, and many productive members of society who made a mistake, sometimes a petty crime where the victims are marginally impacted, and sometimes where there is no victim at all, get swept into the infamous crime category and lose their right to vote forever.

Addressing the House subcommittee, Daniel Zeno of the ACLU noted that damaging property worth more than $1,000 is a class D felony in Iowa, leading to a permanent loss of voting rights under current law. Kaufmann commented that he found that point particularly compelling.

Some legislators have indicated they oppose restoring the right to vote until the offender has paid all restitution. So a wealthy person who may have committed a serious violent offense would be allowed to vote, while a service worker who was addicted to opioids and was convicted of forgery for a counterfeit prescription would be denied that right.

It’s an injustice to allow civil rights to be reinstated just because a person is wealthy. It’s the modern-day equivalent of the indulgences Martin Luther railed against, igniting the reformation of the Catholic Church.

This constitutional amendment would address the inequality of applying the same penalty to all felonies, whether for murder or forging prescriptions. The goal should be to rehabilitate and reintegrate all those who have paid their debts, not just those with spare cash.

We also must support the victims of crime during this process and make it clear that this amendment, though a long time coming, does not invalidate what happened to them or their feelings about those offenses. Acceptance and forgiveness are not just for the offender, but a part of the path towards healing for those offended.

We can all learn from the grace family members of those slain in the Emanuel AME Church showed to the young man who committed that crime. They spoke words of redemption in the most trying time of their lives. May we heal from opening our hearts, listening closely, and applying the same dignity to our own judgments.