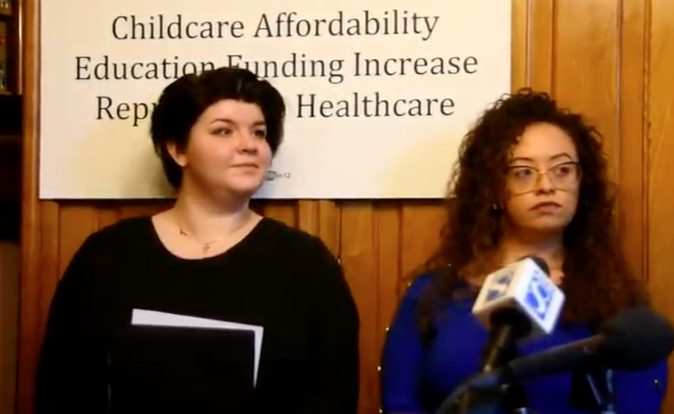 The intersection of anti-choice warriors and misogyny

Matt Chapman: “The need to control women is what this is about, and the rage stems from a perception of impotency, caused by that lack of control.” -promoted by Laura Belin

It was impossible to miss the sea of white the Democratic women of the U.S. House wore to the State of the Union address on Tuesday. It was a nod to the suffragettes, who paved the way to winning the right to vote on August 26, 1920, and a celebration of the record-breaking diversity of the 116th United States Congress sworn in on January 23, 2019, almost one hundred years later.

Yet reminders of how far there still is to go echoed throughout the chamber. While President Donald Trump acknowledged the record-breaking number of women legislators elected, it took a moment for the modern-day suffragettes to stand and applaud. His praise was unwelcome, due to his history of misogyny.

And when they did stand and cheer for their accomplishment, true to form, he had to make that gesture about himself. But that kind of tone-deaf reaction is prevalent among some men in power today, and in men who need to feel power over women, whether consciously or not.

Ever the opportunist, the president spoke about “late-term abortion” like it was a cavalier and thoughtless action and called it an execution. The reality is that those words were used out of context. The clinical meaning, “late term,” means a pregnancy that is past due, around 41 to 42 weeks gestation, which has nothing to do with abortion. “Late term abortion” and “late termination” are constructs of anti-choice lobbyists, who have no problem with playing fast and loose with facts. Their end justifies the means approach has left them devoid of credibility.

As jarring as the president’s words were, the sea of blue and black suits jumping to their feet with thundering applause was more jarring. The conservative men in attendance voiced their pleasure at the craven depiction of women empowered with choice. And the sea of white, who know personally what a terrible burden these choices can be to bear, were subjected to this brutish reaction to their agency. The men’s enthusiasm had more to with how many men are terrified of looking at a woman as an equal–or even more terrifying, as a greater.

Imagine their contempt as the Speaker of the House, Nancy Pelosi, sat right behind the president during his address.

The need to control women is what this is about, and the rage stems from a perception of impotency, caused by that lack of control. Some men realize this, while it lurks in the sub-conscious for others. Too many politicians’ first instinct is to exploit the issue, satisfying an urge to control while using it for political gain.

Some women are against abortion, but rarely are they in the front lines railing against reproductive rights. It is almost always a fundamentalist evangelical man who is here to tell women right from wrong. His anger is the tell of his true agenda, whether he is cognizant of it or not.

In Iowa we had a historic election too. In the state House, Democratic women outnumber the men representing their party by 24 to 22. Now that Republicans are pushing an amendment to the Iowa Constitution with the goal of stripping women of their reproductive rights, we need all the women’s voices we can get for their perspective on this issue.

The day after Trump’s State of the Union, an Iowa Senate subcommittee meeting for the proposed anti-abortion amendment was held. Senator Jake Chapman was happy to chair the subcommittee, and Senator Roby Smith, looking overwhelmed, was the second representative of the majority, both men. Senator Claire Celsi was the only woman on the committee and represented the minority.

Eight people opposing Senate Joint Resolution 9–seven women and one man from the American Civil Liberties Union of Iowa–spoke to the public and the committee. The women shared their own experiences and those of family members to highlight what the loss of reproductive rights would mean to women.

Out of nine speakers supporting the amendment, four were women and five were men. The men’s frustration over the recent Polk County District Court decision that struck down the fetal heartbeat legislation, and last year’s Iowa Supreme Court ruling on the 72-hour waiting period, was evident. They kept circling back and lambasting the judiciary, either ignorant or unwilling to accept the court’s role as a co-equal branch of government. The judiciary’s role is to keep the legislative branch from trampling on the constitution, a concept lost when embracing zealotry and semi-conscious fear.

Anyone with an ounce of objectivity saw this ruling coming. The abortion ban Republicans approved last session was blatantly unconstitutional at both the state and federal level. The amendment working its way through the legislature could be added to Iowa’s constitution, but would be superseded by the U.S. Constitution. The fever dream is to overturn Roe v. Wade, the U.S. Supreme Court ruling that felt like being neutered to so many misogynists.

At the end of the subcommittee meeting, after describing the decision as “judicial activism blatantly showcased”, the chair Chapman stated, “I would challenge anyone, (under article 1 of the Iowa constitution), under section 6 and section 9, to show me the fundamental right to an abortion.”

As far as explaining this fundamental right to the senator, I would suggest starting with Laura Belin’s article on the Iowa Supreme Court ruling Chapman believes (in his all-knowing-hubris) to be wrong. You would think that trying to remedy this decision by amending the Iowa constitution would prove that the decision was correct, but hey, why start pointing out faulty logic now.

If Chapman had read the opinion from the Des Moines Register editors on the controversy in the Iowa House over Belin’s press credentials, this passage would have been helpful: “The Iowa House — whose members probably read Belin on a regular basis to understand their own bills — should grant her the credentials she deserves.”

Not content with just raging against women and the Iowa courts at the subcommittee on the abortion amendment, Chuck Hurley of the FAMiLY Leader spoke at a subcommittee later the same afternoon. That meeting was convened to consider a bill being fast tracked through the legislature, which would change how judges are chosen in Iowa. A common thread in this drama of men struggling to come to grips with not being omnipotent is their reaction to the judicial branch not being sub-servient to the legislature.

State Senator Julian Garrett, who chaired that subcommittee, said he has been working on this legislation for years. But Hurley didn’t mince words as to why he wants this change. It was a direct line to the very ruling that threw out the heartbeat ban he championed, and his frustration at not being able to control every woman in our state was plain to see and hear in his testimony.

Chapman, who was also assigned to this subcommittee, revealed the true motivation for changing judicial selection during the subcommittee he had chaired on the abortion amendment: “This amendment puts the power back in the hands of the legislature, where it properly belongs. I know this is judicial activism evidenced by the fact […] article 1, section 6 and 9, both of which were the reference point(s) for the Supreme Court to strike down the 72-hour waiting period. I would challenge anyone, under section 6 and section 9, to show me the fundamental right to an abortion.”

Whatever fig leaf Garrett had to justify the fast-tracking of his judicial bill, Hurley and Chapman doused with gasoline and lit on fire by demonstrating their rage at the court’s recent decision.

From the homophobia-fueled outrage tooust Iowa Supreme Court justices who stood up for the civil rights of same-sex marriage, to this recent episode where domineering personalities hide behind faith to dictate what they perceive as acceptable and unacceptable for women, we can expect more of the same as we move further down the road to equality.

If #MeToo, #TimesUp, and the Women’s March taught us anything, it is that women are not going backwards to submit to small, controlling, and misogynistic men.

Top image: Screen shot from a news conference organized by Democratic State Senator Claire Celsi on February 6 to oppose Republican anti-choice legislation. On the left, Isabel Barrett, whose grandmother had a life-threatening pregnancy before abortion was legal. On the right, Chelsea Chism-Vargas, Iowa Outreach Coordinator for NARAL Pro-Choice America.