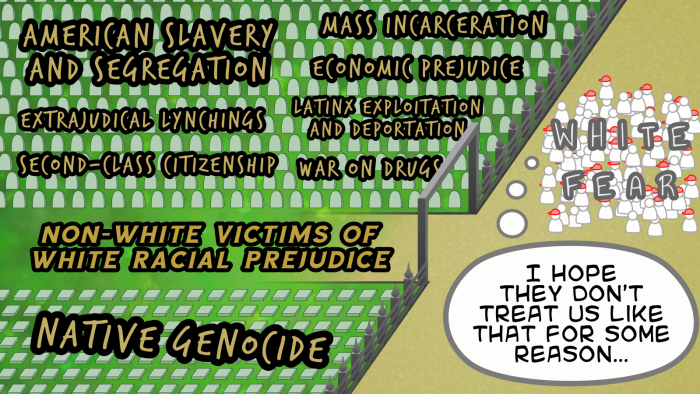 Gwen Hope examines the deeply-embedded racism surrounding President Donald Trump’s “Wall” and those who typically advocate for and support it. -promoted by Laura Belin

The president’s emblematic “Wall,” while envisioned to become physical, is more accurately a political symbol – an ideological device. It is a symbol of power and might for the traditionally quintessential U.S. citizen – the white Protestant.

This especially goes for men, who have traditionally led the patriarchal U.S. society. This illusory power is summoned and bolstered to defend against what that quintessential citizen typically fears the most – diverse, multicultural society, and those they see as the harbingers of their fall from power most typically – the Latinx and the Muslim. This originates from an ethnocentric and racist mindset of a group of people would would prefer a homogeneous society. 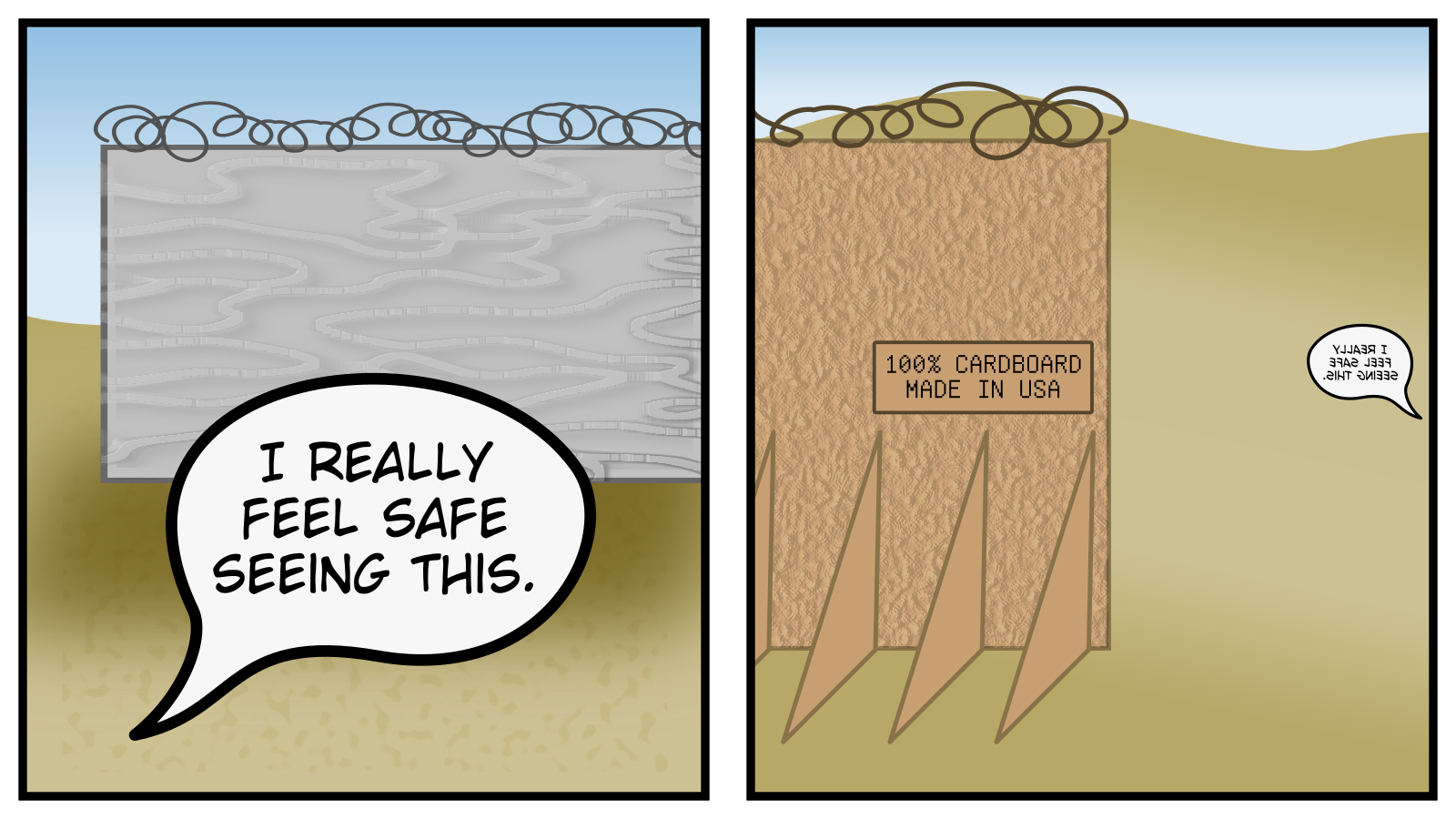 Nobody with a reasonable and coherent understanding of United States border geography can honestly say a wall along the southern border is necessary, likely to be effective, and even meaningful from a physical standpoint. Of the places where border walls do exist along specific regions already, they are shown to be highly ineffective, easily surmountable, and increasingly pointless. Walls, patrols, checkpoints, and the like are part of an expansive and expensive program to give the illusion of secure, impermeable borders.

Similar to TSA screenings in airports, most of U.S. border security can be lumped under what is known as “security theater.” Security theater provides the illusion of safety or security while offering little to none in actuality. A good approximation to security theater is making sure everyone doesn’t step on a sidewalk crack, lest a mother somewhere nearby be stricken with back trouble. Another is wearing full medieval plate armor around a dangerous neighborhood; while you might feel safe, a paltry modern handgun can easily defeat the armor.

Step 2: Security For Whom? From What? 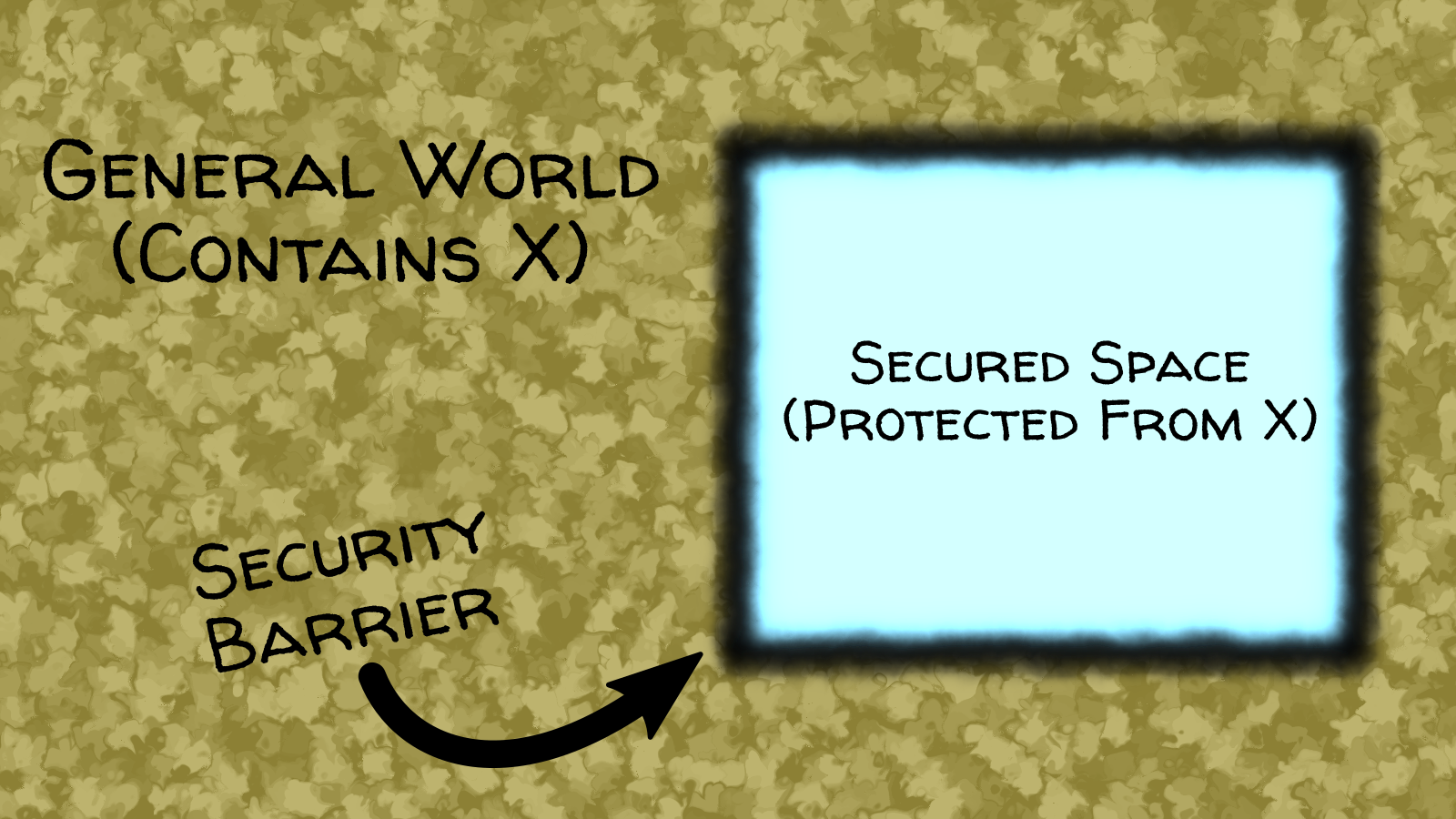 The goal of any security is to provide protection for something, somewhere, or someone from another something or someone which might pose a certain type of threat to it. Security theater emulates actual security and relies on the same framework. So, when we’re talking about “the Wall”, we’re talking border security. So we need to ask ourselves two questions: Who/What are we securing? From Whom/What are we securing it?

First: Are we securing…

…the United States? Not really, nation-states are abstractions and ideas, you can’t hurt the U.S. because it’s an idea. So it’s probably the more tangible foundation of a nation – its people.

…the population of the U.S.? Closer, but still not there yet. After all, many groups exist within that population that the government doesn’t work on protecting, such as undocumented individuals. Maybe it’s those who legally attached to the nation – its citizens.

…the citizens of the U.S.? Closer still, yet somehow not there yet. Again there are plenty of population groups of citizens which the government doesn’t desire to protect. Perhaps, it’s our best and brightest – our ideal citizens.

…the ideal citizens of the U.S.? Almost. The government spends a lot defending its first-rate citizens, but only if those citizens tend to meet certain socioeconomic, ethnic, and other criteria. So with these desired criteria, perhaps, we’ve found it – our desired citizens.

…the desired citizens of the U.S.? Yes. We are securing those whom society and government prefers to be citizens.

So we’ve discovered the group we’re protecting, the preferred citizens of the U.S.

Second: Are we protecting against…

…anyone crossing the borders? Not quite. The issue and vitriol really only focus on the Mexican-American (southern) border. There must be something more specific to these border-crossers. Perhaps it’s war – an invading army.

…an invading army? No. While often believed to be one, there is no invasion happening at our borders. Border-crossers are diverse, hailing from many different regions, compromising many different types and amounts of people, and typically unarmed. So, perhaps they’re bad people – criminal thugs terrorizing our streets.

…immigrant job theft? No. Jobs can’t be stolen, they can only be given. If a job is given to a non-citizen illegally instead of a citizen, that is the fault of the employer, not the non-citizen just looking for work. Furthermore, harsh migrant labor crackdowns have resulted in lost production for businesses in Alabama and California. Citizens simply didn’t take up and replace the labor the migrants did. Citizens and migrants seem to prefer different job paths. So perhaps its the already-burdened social system – taking from the system?

…social system drain by immigrants? If it’s from the government, non-citizens can’t get it. In fact, the sales taxes, income taxes, and other taxes pay a good deal into the same system that neglects them. Perhaps maybe we’re protecting culture – American culture?

…foreign culture infusion? Cultural exchange and infusion happened a long time ago. In fact, a good chunk of western U.S. used to belong to Mexico and Spain. American culture is an amalgamation of various immigrant cultures that partially blend over time. The amount of “foreign” restaurants around can give a hint about this. Americans love adopting or stealing things from other cultures. So what really are we protecting our desired citizens from? Oh wait… undesired potential citizens.

…undesired potential citizens? Yep we’ve hit the nail on the head this time. We don’t want potential for more of them in our society apparently. But what defines whether citizenship is desired or undesired?

From Trump’s own rhetoric, we can clearly see who he and his ilk view as desired citizens and those who aren’t. The desired ones are white, European-heritage, and preferably born here. The undesirables are people of color, especially Latinxs, especially Middle-Easterners and Muslims (often regarded as synonymous). 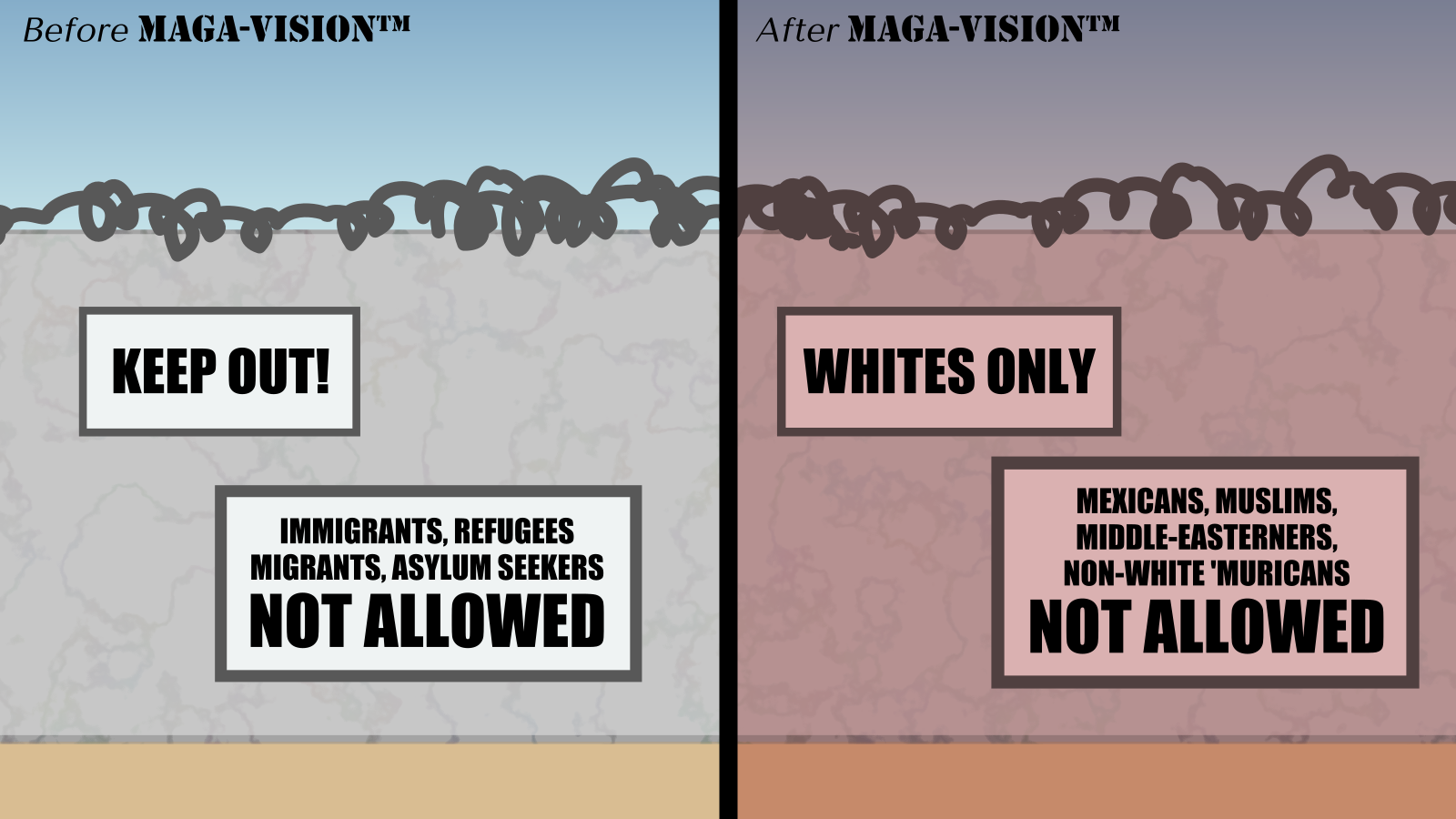 There’s an ancient saying “Live by the sword, die by the sword“. White prosperity has been carved out by the sword, firearm, whip, chain, and noose in this country at the expense of tens of millions of massacred natives and enslaved Africans. War has been an American institution constantly for most of its history.

Seeing their numbers slip from hegemonic domination to merely plurality, white populations in the U.S. are afraid. Deeply afraid of the other. They always have been. The U.S. first restricted immigration in 1882 (Asians). All natives weren’t automatically citizens until 1924, the same year Congress limited immigration from (Catholic and Jewish-predominant) southeast Europe and all non-whites. This is in addition to the massive disenfranchisement, segregation, and persecution of African-Americans.

Seeing numbers slowly tick up, white reactionaries are scared of what they call the “Great Replacement”, of which there are European and American versions, components of the larger “White Genocide” white supremacist conspiracy theories. They’re scared if no longer dominant that they might receive back in-kind the prejudice, repression, and terror they’ve meted out. More succinctly, they are scared the world is out to get them because they previously were out to get the world.

Psychologically, white supremacist thought tends to exhibit a dissonant combination of inferiority and superiority, often possessing them simultaneously intermingled with a martyr or persecution complex. They see themselves as the Übermensch, the superior race of humans, while believing themselves an oppressed minority being oppressed by those they regard as inferior. Most mainstream conservative thought in the United States echoes these same patterns in their talking points and beliefs because the foundation of conservatism in this country is white supremacist.

Instead of having an honest and open conservation with themselves, which would render all but the most stubborn forced to admit the long-held prejudices of our society and their continuation to the modern day, they latch onto a scapegoat.

The problem is not with them and their ideology, they tell themselves, it is the other that must be to blame – the person of color, the Latinx and Hispanic, the Middle-Easterner, the Muslim, the Jew, China, India, fellow whites who admit and try to rectify the shameful past – anyone but them.

Of course, this wasn’t merely conjured up. After World War II, Americans railed against the murderous Nazi ideology that led to the Holocaust and the deaths of millions Jews and ethnic minorities, then returned home to a country that put Japanese citizens in concentration camps, lynched and segregated African-Americans, and continued the prejudices of the past in much the same fashion.

To be clear, WWII-era Nazi disgust was born of propaganda and war necessity, but the reason the revulsion lasted was because Jews were predominantly white Europeans – fellow whites. Regardless, many Jews trying to escape the Holocaust were turned away from the U.S.’s isolationist, xenophobic shores.

It took little to no time to convert the actions of Americans back to their existing prejudices. The Cold War amplified them and added new authoritarian measures, suppressing socioeconomic political ideologies aside from American capitalism and individualism, encouraged Americans to turn in neighbors suspected of being too liberal, and cemented fascist bigotry under McCarthyism. The modern scapegoat, however, is little different. Conjured by the ruling and capitalist classes to protect their economic interests.

The modern goat is disseminated by propaganda mills run by Rupert Murdoch (like Fox News) and other ultra-rich businesspeople, as well as countless reactionary websites (such as Brietbart, The Blaze) and personalities (Bill O’Reilly, Sean Hannity, Glenn Beck, Ben Shapiro, etc.) The goal of these propaganda sources is simple – profit off convincing the white populace of the lie that they’re oppressed, targeted, and being culturally exterminated. In doing so, they not only radicalize a population for injustice, they also have amassed an army willing to vote against their own interests in favor of those wealthy and in power.

Step 4 – Advocate For A Better World

The Trump era has emboldened, empowered, and exposed the latent prejudices of our society enough that they are so plainly visible that even moderates and centrists are calling them out for what they are. It has become necessary to advocate for truth, justice, and reality in this era of post-truth, injustice, and warped reality. It’s important to speak out and stand up for the side of truth and justice – to friends, to family, to colleagues, to strangers, to everyone. That doesn’t mean one person has to change a city, but work within your sphere of influence.

Good ways to combat this degradation of our society is by limiting propaganda sources, the yellow press. Stay educated and aware. Block reactionary content like Fox News from your cable and other media. Familiarize yourself with which of your local stations are owned by the reactionary Sinclair Broadcasting Network. Dissect headlines and talking points and learn how to spot and call out conservative propaganda.

Frequent good fact-checking sources, like PolitiFact or Snopes. Evaluate issues in your area of expertise and encourage others to do the same. Organize and develop local and regional associates to help stem the flow of right-wing misinformation and neo-fascist propaganda in your cities and states. Stay up-to-date on the issues.

Put what you know into action instead of just letting it fester within your head, this is known as “praxis”. Be prepared to advocate for a better world.

Gwen is a queer trans woman in her mid-20s who was born and raised in central Iowa. A diverse generalist, Gwen’s passion lies in speaking, writing, community education, and activism. One can find her periodically lecturing at DMACC as a guest speaker.