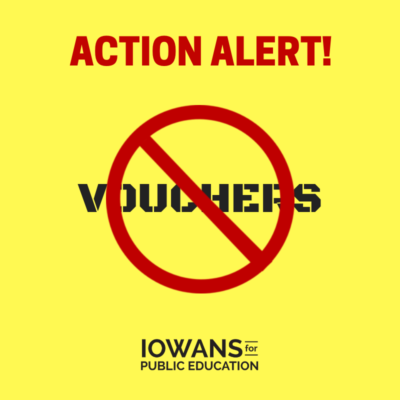 Every year, like clockwork, a dangerous and ruinous private school voucher bill comes up in the House or Senate. In 2018, the bill made it to a House subcommittee, but was never brought to the full committee because it didn't have the votes. State Representative Walt Rogers, who brought the bill forward last year, was not re-elected.

This year, the Iowa Senate is emboldened to pass this legislation, Senate File 372. Monday, March 4 will be the big test of whether Republicans are serious about moving it forward. The meeting will be held in the Iowa Senate in room 22 at 2:00 p.m. Public comment is not allowed at this meeting, but people are encouraged to attend. Show up early and be prepared to stand for up to an hour. Wear your "Red for Ed" apparel.

Vouchers are a way for private schools to obtain funding from states. In this case, $6,880 in taxpayer money would be placed on a debit card and given to parents to spend either on private school tuition or on expenses for home-schooled children.

There are many problems with the whole concept of vouchers. Here are some of the major reasons that were brought up by opponents in the subcommittee meeting:

There are two things you can do. First, show up at the meeting. Second, contact all the Republican members on the Senate Education Committee. Here are their email addresses. Please tell them that you oppose private and home-school vouchers and Senate File 372. All the Democrats oppose this bill and will be voting no.

Together, we can stop this harmful legislation from becoming law. Thank you for caring.

UPDATE from Laura Belin: Republicans pulled Senate File 372 off the Education Committee's agenda on March 4. However, they put it back on the agenda for the committee's final meeting before the "funnel" on March 7. A new version of the bill would provide the "education savings grants" only to students with a disability or an "individual education plan" (commonly known as an IEP). The amended bill, now numbered Senate File 547, passed the Education Committee by eight votes to seven. Republicans Sinclair, Behn, Edler, Johnson, Kraayenbrink, Rozenboom, Sweeney, and Zaun voted to send the bill to the Senate floor. Republicans Cournoyer and Lofgren joined committee Democrats Celsi, Herman Quirmbach, Amanda Ragan, Jackie Smith, and Zach Wahls in voting against the bill.