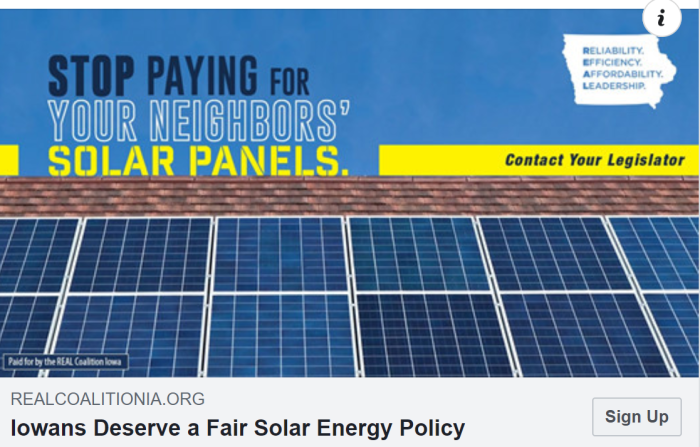 Looks like the utilities and electric cooperatives are up to no good. A new "dark money" organization just launched ads on Facebook.

The "REAL" Coalition began advertising on Facebook on March 1, arguing for legislation that would undermine net metering. The REAL Coalition is doing this under the guise of promoting renewable and clean energy.

What is Net Metering?

Net metering is the policy that since the 1980s has let Iowa residents install energy generation on their own property. Customers can then use wind turbines or solar panels to reduce their energy bill and sell the excess electricity produced back to the grid.

According to the Solar Energy Industry Association,

Net metering is a billing mechanism that credits solar energy system owners for the electricity they add to the grid. For example, if a residential customer has a PV system on the home's rooftop, it may generate more electricity than the home uses during daylight hours. If the home is net-metered, the electricity meter will run backwards to provide a credit against what electricity is consumed at night or other periods where the home's electricity use exceeds the system's output. Customers are only billed for their "net" energy use. On average, only 20-40% of a solar energy system’s output ever goes into the grid. Exported solar electricity serves nearby customers’ loads.

Net metering gives consumers more control over their energy usage, carbon footprint and gives them some level of independence from the regulated utilities. The Iowa Environmental Council has a great one-pager explaining the basics.

The policy has also spurred major investment in distributed generation of electricity through homes, generated a new solar/wind economy in rural Iowa and lead to major investments throughout the state. Distributed generation also has the added benefit of bringing some security to consumers who don't have to rely solely on their utilities to provide electricity - whether as a result of weather events, disasters, or even sabotage of the electric grid.

Major utilities oppose net metering (and have been attempting to chip away at it all over the country) because it reduces consumption of their centrally produced energy products. This fight has been going on for years; for example, read this Iowa Environmental Council blog post from 2016.

How does the "REAL Coalition" fit into this picture?

Now it seems that utilities and other parties in Iowa have created a dark money group called the REAL Coalition that is advocating for "tariffs" (also known as MORE TAXES) on those who produce their own clean energy. On their website and in social media advertising, they posture as a group promoting wind and solar power. You can find some of the confusing Facebook ads below. 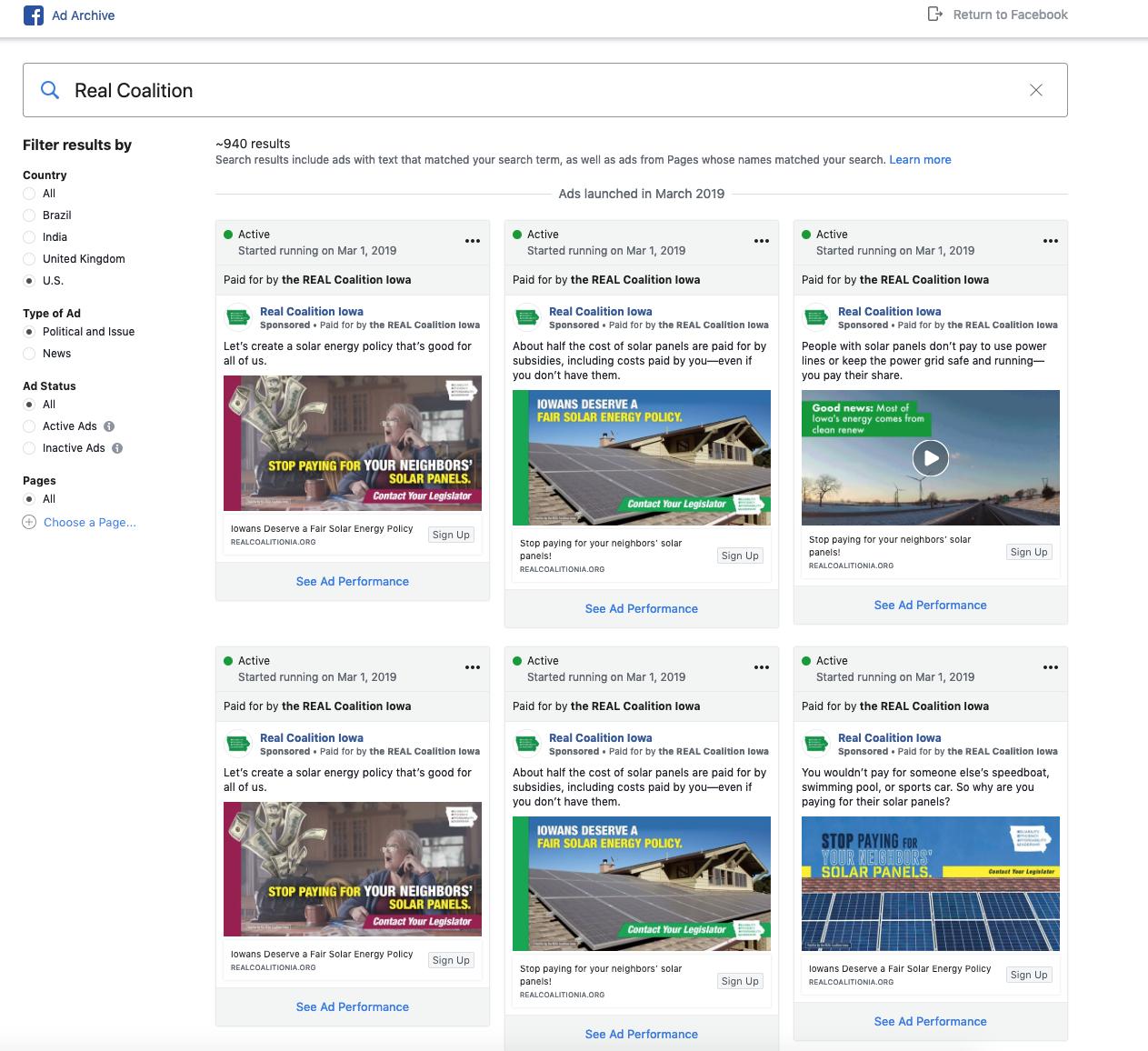 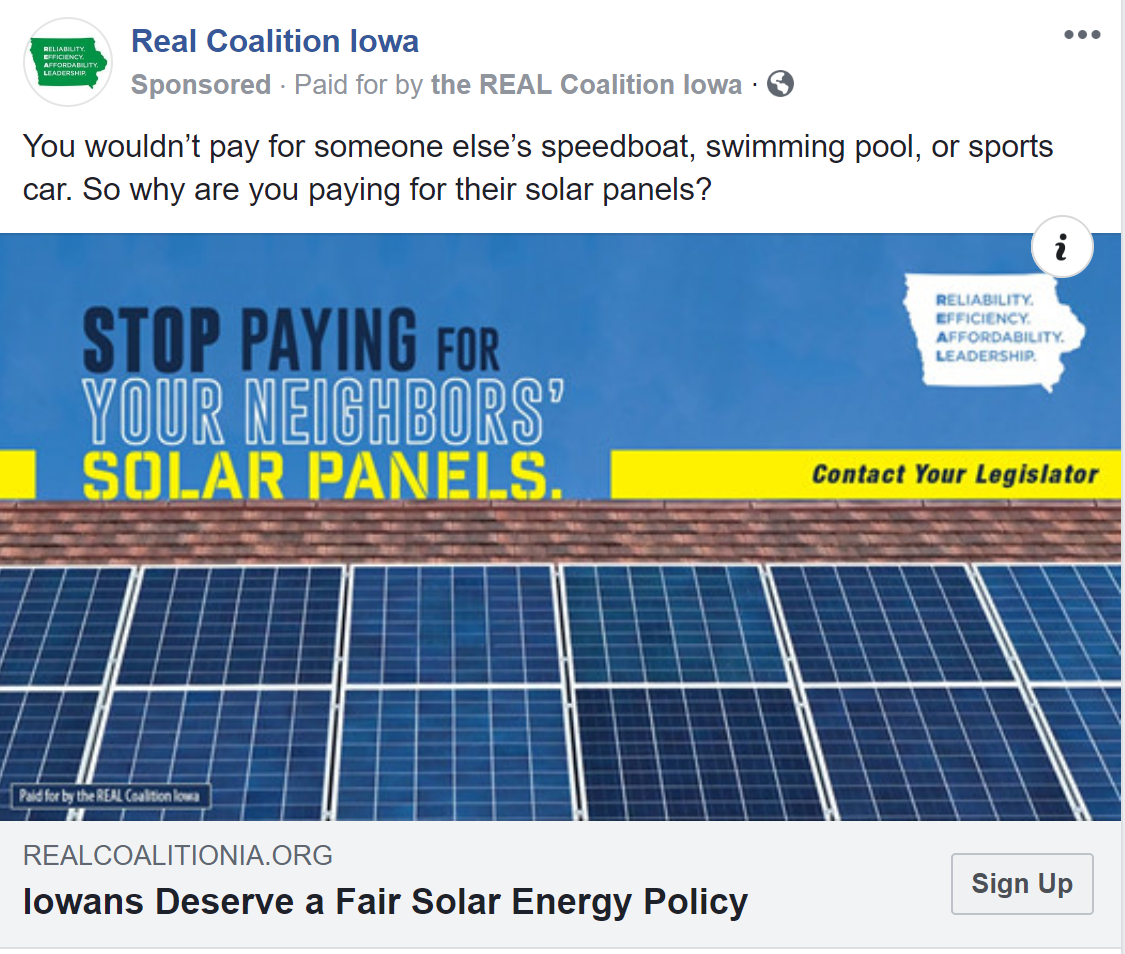 According to Facebook's Help Center:

The Ad Archive (or Ad Library, in countries other than US) lets people view and search for ads related to politics or issues of national importance that have appeared on either Facebook or Instagram. The Ad Archive may include both historical and current ads.

A user can visit the archive and enter in keyword searches for organizations, topics, candidates and other details related to politics or issues of national importance. It's a great resource for understanding who's campaigning on what.

After digging into the archive, I thought I would try to find out who was funding this "REAL" coalition. This coalition is so "real" that they literally have two (2) Twitter followers (including me):

Who Is the REAL Coalition Anyway?

Then, when I dug into the Iowa Secretary of State's database to learn who their board members and funders were, I only stumbled across this filing document listing Des Moines trial attorney Steve Wandro as their only officer: 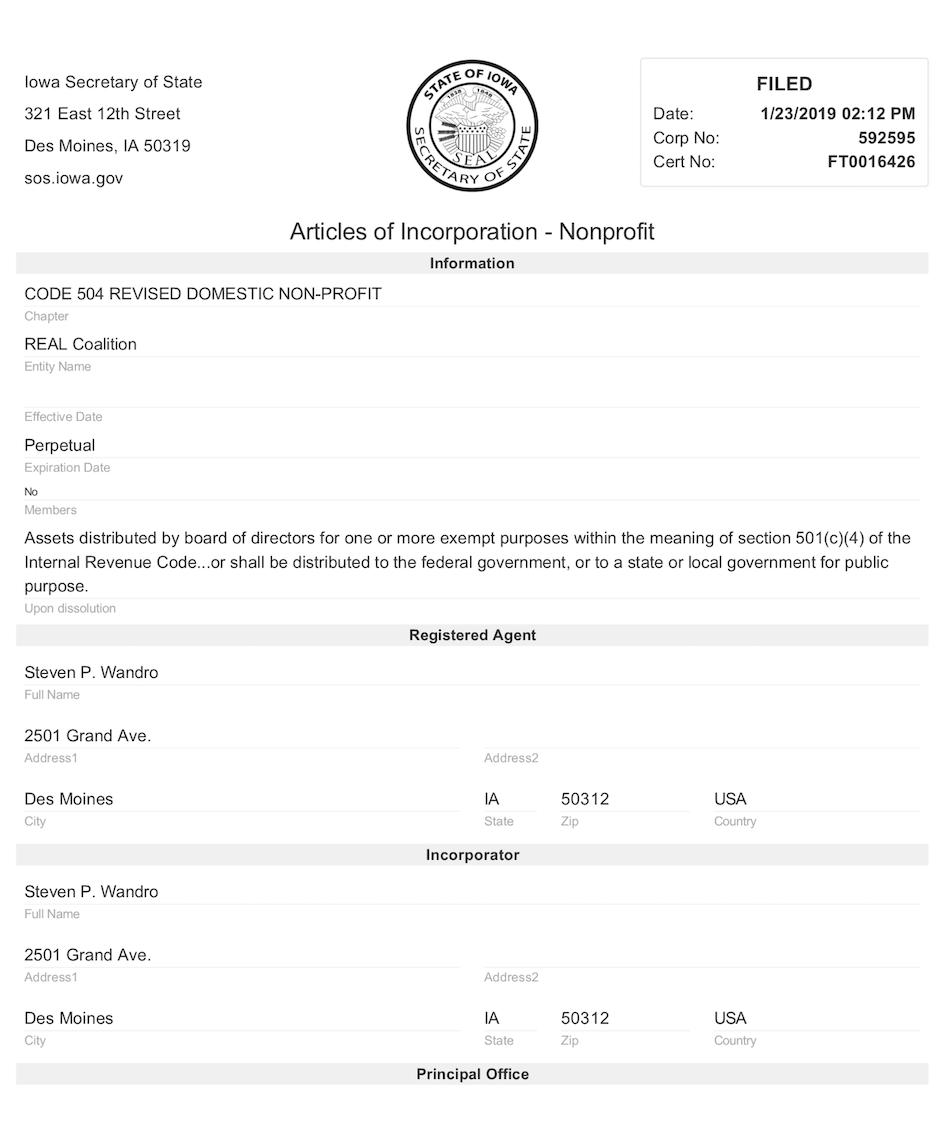 I like Steve. He's generally a great advocate for working people, has supported a number of progressive causes for years, but he's also done some lobbying from time to time. That said, he's not registered as either an executive branch lobbyist or legislative branch lobbyist this session. So, maybe they just retained him to create a shell organization. He does a fair amount of campaign finance compliance work as well. Not inferring anything nefarious on his part, but it is sad that Iowa law allows for this sort of opacity in legislative and executive branch lobbying.

So if you care about clean energy and reducing our dependency on big utility monopolies, and you want to bring some transparency to the Iowa legislature, contact your legislator and the governor and tell them to oppose House Study Bill 185 and Senate Study Bill 1201. These bills are designed to significantly reduce net metering and distributed generation in Iowa. Our kids and grandkids will thank you.

Editor's note from Laura Belin: I sought comment from Wandro about this organization and his work for it on March 3 but have received no reply.

Mark Langgin is an Iowa political consultant. He has no client with an interest in this issue and wrote this post as a Des Moines resident who cares about clean energy, consumer choice and the environment.