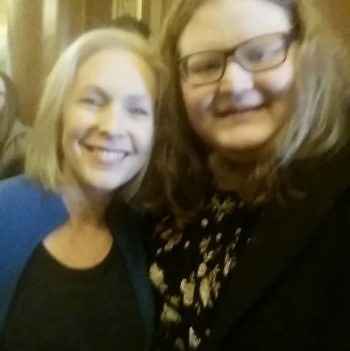 Why I support Kirsten Gillibrand for president

I’m Kyla Paterson, chair of the Iowa Democratic Party’s Stonewall Caucus. I very much enjoy leading such an amazing constituency that will build this caucus up for years to come. I’m also the first transgender chair of the caucus.

You may have read on Buzzfeed in January that I support U.S. Senator Kirsten Gillibrand of New York for the 2020 Iowa caucuses. I am not endorsing on the behalf of the Stonewall Caucus—I have given my personal endorsement.

Some people may be wondering why I did it the way I did, or feel that I was too early, but I think it’s time to stand up for fellow women like Gillibrand. I have been following her since her book Off The Sidelines was released and have been inspired ever since.

You all know about the former Senator Al Franken’s sexual misconduct by now. I endorsed Senator Gillibrand not just because she encouraged him to resign, but because she’s stood with survivors her whole career. It would have been out of place if she hadn’t said something.

Being an outspoken supporter of survivors isn’t always easy, however, and Senator Gillibrand is an expert when it comes to dealing with backlash for calling on a colleague to step down. I’ve been impressed with how she is always still fighting for women. She’ll never stop. This high expectation of conduct is what I want in a presidential candidate. I believe Senator Gillibrand will have the best work environment for her staffers, which I believe is a direct correlation with success.

My endorsement wouldn’t be complete if I didn’t say that LGBTQIA+ issues are a huge reason for my support. Since being appointed to the Senate in 2009 (following Hillary Clinton’s appointment as secretary of state), Gillibrand has proved she’s learned about the needs of the LGBTQIA+ community. She became the first U.S. senator from New York to support marriage equality. She supported the repeal of the Defense of Marriage Act (DOMA) and the “don’t ask, don’t tell” policy. She’s also been a strong advocate for transgender service members. She brought experts from the military who proved that transgender service members are no different than their fellow cisgender service members.

Most recently Gillibrand’s become a key sponsor of the bipartisan bill to repeal the Transgender Military Ban, so transgender service members can continue serving their country. She also recognized trans women’s existence on International Women’s Day, something many other presidential candidates had not done.

I have also noticed whenever she talks about topics like transgender issues, she’s passionate. When I endorsed her on January 19, she said in her speech at the Peace Tree Brewery in Des Moines, “If I had a trans child, I would want to fight for them. They deserve every bit of protection and every bit of opportunity that every other child in America deserves.” When I heard this I knew I had chosen the right person for the job to be our presidential nominee in 2020. I think she’s got the compassionate drive to win, and I believe she will fight for people like you and me.