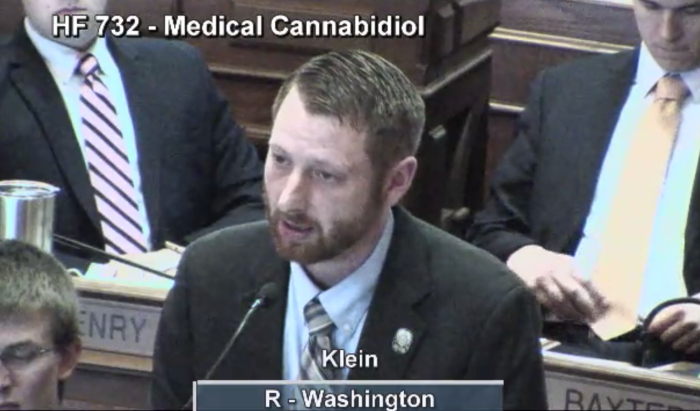 "Is it perfect? No, it's not perfect. Are we moving in the right direction? Absolutely," Democratic State Representative Wes Breckenridge said shortly before Iowa House members approved a bill to improve our state's medical cannabis program.

House File 732 would allow some Iowans to use more potent products and would make it easier for some patients to apply for a registration card. The House passed the bill by 96 votes to three after Breckenridge and Republican State Representative Jarad Klein praised each other's consensus-seeking.

But for a suspenseful few minutes during the March 26 floor debate, the future of the bill was in doubt because of a first-term Republican's far-reaching amendment.

Current Iowa law allows patients with certain "qualifying conditions" to register with the Iowa Department of Public Health and obtain medical cannabidiol at one of five dispensaries in Sioux City, Council Bluffs, Windsor Heights, Waterloo, and Davenport. The program covers a range of oral and topical products, along with suppositories and "nebulizable inhaled forms." Smokeable marijuana is prohibited.

Klein ran House File 732 through the chamber's Public Safety Committee, which he chairs. Its most important provisions would:

A House Democratic staff analysis (enclosed in full below) summarized other parts of the bill.

Klein's original draft, as approved by the House Public Safety Committee, would have allowed dispensaries to provide up to 20 grams of THC to a patient or patient's caregiver within a 90-day period. The Iowa Department of Public Health could have decreased that limit through administrative rule-making.

A Democratic amendment proposed raising the maximum disbursement to 30 grams over a 90-day period and eliminating the department's authority to decrease it. In addition, the amendment would have established a waiver process so patients could receive a higher dosage of THC if a health care practitioner determined 30 grams in 90 days is "not an adequate amount to alleviate the patient's debilitating medical condition," and the patient suffered from severe or chronic pain, amyotrophic lateral sclerosis (ALS or Lou Gehrig's disease), or cancer.

Negotiations among Klein, Breckenridge, and leaders in both parties produced a compromise:

Both Breckenridge and Klein spoke in favor of the Democratic amendment (starting at 4:49:50 of this video). Klein thanked Breckenridge for working with Republicans to make the bill better: "We don't want to make the perfect the enemy of the good." House members approved the amendment by voice vote.

Urging colleagues to support the bill, Democratic State Representative John Forbes particularly praised the language allowing nurse practitioners and physician assistants to certify the diagnosis. Many customers in his Urbandale pharmacy have told Forbes their physicians are not "comfortable" signing the paperwork for the medical cannabis program. Forbes added that switching from a percentage cap to a maximum dosage by grams is consistent with standard practice in his industry.

Iowa Relief, the Community HIV and Hepatitis Advocates of Iowa Network, the ACLU of Iowa, and several groups representing Iowa nurses lobbied for House File 732. Only the Iowa Behavioral Health Association had lobbyists registered against the legislation.

All 46 House Democrats and 50 Republicans supported the bill on final passage. Only GOP Representatives Terry Baxter, Skyler Wheeler, and Stan Gustafson voted no.

Republican State Senator Brad Zaun told the Des Moines Register he's met with Klein to discuss medical cannabis legislation and is "very, very excited about the opportunities." Zaun chairs the Senate Judiciary Committee, which has approved a bill with some of the same provisions as House File 732. The Senate bill would also expand the number of qualifying medical conditions.

"EVERYONE TOLD ME NOT TO DO IT"

House File 732 might not have come to a vote at all.

Republican State Representative Jeff Shipley had offered his own amendment, which would have added a dozen new qualifying medical conditions and redefined "medical cannabidiol" in Iowa code to cover "any species of the genus cannabis plant, or any mixture or preparation of them, including whole plant extracts and resins."

In other words, patients approved for the state program could legally consume products using the whole cannabis plant, including smokeable marijuana.

Speaking in favor of his proposal (starting at 4:45:30), Shipley said,

I know this issue's really controversial. I don't quite understand the controversy, to be honest with you. To me, it's just about empowering patients. Like any medicine, medicines can be abused. It happens all the time.

He noted that an estimated 250,000 people die of medical errors every year. Although marijuana abuse is a serious issue, "At the end of the day, I want patients to use whatever medicine they see fit." Shipley said many people die of opioid overdoses, but he wasn't aware of statistics pointing to any marijuana overdoses. We aren't tapping into the full range of potential benefits from cannabis.

Instead of urging colleagues to support his amendment, Shipley wrapped up by asking for unanimous consent to withdraw it.

Speaking by phone on the evening of March 26, Shipley confirmed legislators from both parties and supportive lobbyists had warned him against pushing for a vote. The chief clerk might have declared his amendment not germane, or in the worst-case scenario, leaders might have pulled House File 732 from the calendar. House Speaker Linda Upmeyer had spoken briefly with Shipley earlier in the day, and while the speaker was "very cordial," she "made it clear" his amendment "wasn't going to fly on her watch."

The latest Iowa poll by Selzer & Co for the Des Moines Register and Mediacom found that 78 percent of respondents favor expanding access to the state program "by covering more diseases and conditions and adding more dispensaries around the state beyond the current five locations." I'd been curious to see how many lawmakers were on Shipley's wavelength.

So was he, Shipley said. "It's not like my amendment was all that radical," because patients would have been using cannabis under a physician's supervision. So he was "frustrated" not to call a vote. On the other hand, he was just elected for the first time in 2018 and is still finding his way in the legislature. "I was more than happy to yield to more experienced lawmakers, because I thought they were advising it in good faith."

When he rose to speak, had Shipley made up his mind to withdraw the amendment? His body language suggested to me that he might have been on the fence until the last moment. "There was a little bit of hesitation," Shipley admitted. "In my heart, I wanted to" ask for a vote. But "everyone told me not to do it," and he didn't want to imperil the bill.

Final note: House members didn't incorporate a "statement of consistency with federal law" in House File 732. The Senate bill that made it through Zaun's committee a few weeks ago states, "Notwithstanding any federal regulation to the contrary, the use of medical cannabidiol pursuant to this chapter is not subject to federal regulation." Longtime medical cannabis advocate Carl Olsen has argued that such language is essential to ensure Iowans manufacturing, distributing, or consuming cannabidiol products are not "needlessly stigmatized and deceived into becoming federal criminals."

Appendix: Iowa House Democratic staff summary of the state's current medical cannabis law and how House File 732 would change the program. As discussed above, House members approved an amendment to raise the maximum disbursement over a 90-day period from 20 grams (as this memo states) to 25 grams.