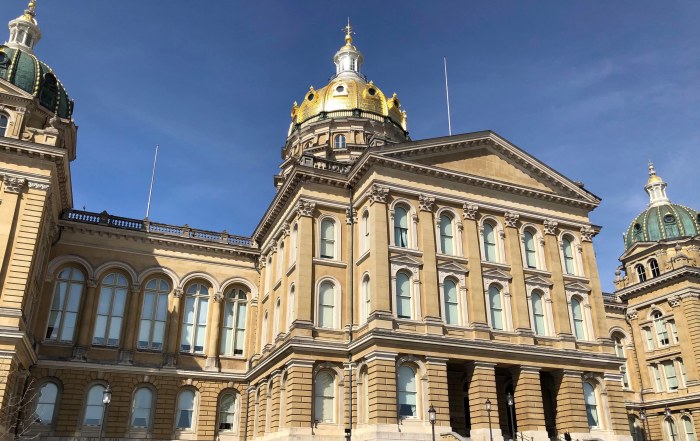 Key lawmakers said for months the 3 percent tetrahydrocannabinol (THC) cap would never be lifted unless Iowa's Medical Cannabidiol Advisory Board recommended doing so. Nevertheless, the Iowa House mysteriously decided to lift the 3 percent cap on THC shortly before the first legislative funnel deadline on March 8.

The Iowa House of Representatives overwhelmingly approved House File 732 on March 26 by 96 votes to three. The bill quickly moved to the Iowa Senate, where it was referred to the Senate Judiciary Committee. A Judiciary subcommittee met on April 1 and recommended passage without amendment. At the Senate subcommittee hearing, both Republican Senator Amy Sinclair and Democrat Rich Taylor indicated that they were concerned any changes would kill the bill in the Iowa House.

However, when the full Judiciary Committee considered the legislation on April 4, committee chair Brad Zaun offered an amendment that removed language lifting the 3 percent THC cap. The amendment passed along party lines, nine Republicans to five Democrats, after which the whole committee recommended approving the amended bill by thirteen votes to one.

Zaun's amendment might change HF 732's prospects dramatically. Other amendments might be considered if Senate leaders bring the bill up for debate. The House might amend the bill further if it comes back to the lower chamber. Fasten your seat belts.

Medical cannabis legislation has never been an easy task in Iowa.  Negotiations are typically not completed until the last day of the session, and then only during overtime.  Senate File 2360 (Iowa Code Chapter 124D) was finally negotiated around 3:00 a.m. on May 1, 2014; and House File 524 (Iowa Code Chapter 124E) was finally negotiated around 5:00 a.m. on April 21, 2017.

To help us understand what is going on, we need to know some history about Zaun's efforts on this issue. He is a medical cannabis advocate.  A time line will help with our understanding.

Zaun was the only Republican to vote for Senate File 484, a medical cannabis bill that cleared the Iowa Senate by 26 votes to 19. One Democrat opposed the bill, so Zaun's support was needed to reach a majority in the Senate. That bill did not pass in the Iowa House.

The Iowa Senate voted 45-5 for Senate File 506, a major expansion of the medical cannabis program. Zaun voted with the majority. The House did not take up the bill.

Zaun introduced Senate File 77 which proposed raising the THC cap from 3 percent to 13 percent. A subcommittee approved that bill on January 31, but no further action was taken on it.

Zaun introduced Senate File 256, which left the THC cap at 3 percent. This bill made it through subcommittee on February 18, and the full Senate Judiciary Committee approved it on March 5 with an important amendment on federalism. That amendment passed by fourteen votes to one.

The amended SF 256 as amended was renumbered as Senate File 501.

What does it all mean?

Considering that Zaun initially proposed raising the THC limit to 13 percent, then backed off to the current legal limit, it’s no surprise that the Senate Judiciary Committee amended HF 732 on April 4 to strike the section lifting the THC cap and replacing it with the current 3 percent limit.

However, the committee did not strike other language in HF 732, which limited patients to 25 grams of THC in a 90-day period. So, HF 732 now is more restrictive than current law regarding THC. Obviously, that is a substantial change from what the Iowa House passed.

It’s uncertain what the future holds for HF 732. It could be amended if it gets debated on the Senate floor. It could be amended if brought to the House floor. (Any amended version of this bill would go back to the House.) Certain committees and Senate or House leaders can file bills after the legislature's "funnel" deadline, so a new bill could emerge before the session ends.

The House bill does not contain the federalism language Zaun put in the now-dead Senate File 501.

It's imperative that any medical cannabis bill approved this year should clarify that Iowa is not authorizing violation of federal law. Please raise this issue with state lawmakers, and stay tuned!