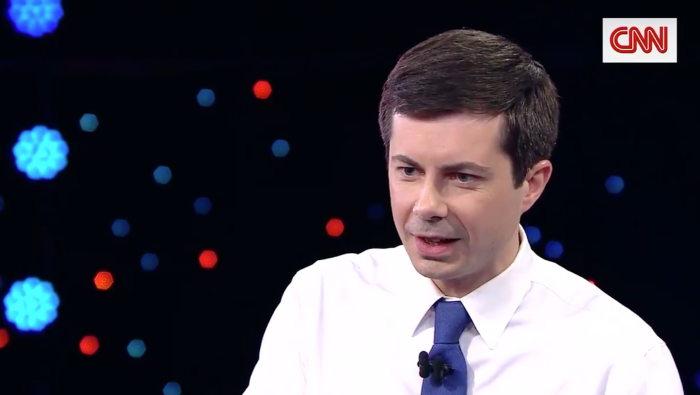 What we should learn from Pete Buttigieg

Ira Lacher discusses the appeal of South Bend Mayor Pete Buttigieg, who has recently moved up in Iowa and national polling of the Democratic presidential field. -promoted by Laura Belin

By conventional wisdom, Pete Buttigieg shouldn't be a top-tier presidential candidate. At 37, he's only two years older than the constitutional minimum age to be president. As mayor of a small city in Indiana, he hasn't the national political experience to reach for high office. As a gay man with a husband, he defies the mold that the president of the United States has to be some "Marlboro Man." And as a Christian, he risks turning off secular voters who feel that Christians' agenda runs counter to progressive Democratic ideals.

And yet, Pete Buttigieg has vaulted to rock-star status not despite all of the above but because of it. He's done it because he's not afraid to wear his genuineness on his sleeve.

"I am not skilled enough or energetic enough to craft a persona. I just have to be who I am and hope people like it," he told The Chicago Tribune.

He is not running as a millennial, or as a gay man, or as a Christian. He is running as an American who happens to be millennial, gay and Christian. In doing so, he has turned identity politics on its head. Which makes it easy for him to forge issues facing young people, gay people and Christian people into issues that should concern all Americans: the moral crisis of unfair, untenable debt; the societal crisis of irrational hatred of The Other; and the political crisis of abandonment of First Amendment rights.

He has done this as no candidate in recent memory has been able to. Seemingly everyone has tried to cast aside the racial, spiritual, and gender identities that made them into the persons they are and morph into the alter-ego of Captain EveryAmerica: a hermaphrodite for all.

And yet, Pete Buttigieg has no problem speaking of his creator. “He talked about God in a room that’s probably full of atheists,” Jack Jacobson, a member of the D.C. State Board of Education, told USA Today. “He does it unabashedly and in a way that doesn’t come across as threatening, dismissive or negative.”

Like an antimatter Ronald Reagan, who masterfully countered a question about his age during a 1984 presidential debate with Walter Mondale, Buttigieg makes no apologies about when he was born. "You go back to JFK, his inaugural address, he said something about how the torch had been passed to a new generation born in this century, which had been tempered by war and disciplined by a hard and bitter peace," he told Vice.com.

He embraces his sexuality, celebrates his husband, Chasten, and chides those who call him a sinner. Speaking to an audience in Washington, D.C., Buttigieg said, according to USA Today: "I wish the Mike Pences of the world would understand . . . that if you have a problem with who I am, your problem is not with me. Your quarrel, sir, is with my creator.”

Contrasted with the phoniest, emptiest, most amoral person to sit in the Oval Office, Pete Buttigieg and his implicit message -- that America is great because so many different people worked together to make us great -- is a warm spring breeze for our political winter. His emergence from "Who He" is no accident.

We will see how he stands up to the microscopic scrutiny that is sure to descend on him, now that he is a top-tier candidate. But I suspect that like Detective Charles Boyle, the quiet, unassuming cop in the Brooklyn Nine-Nine precinct who's the one you can count on when it matters, he's going to emerge just fine.