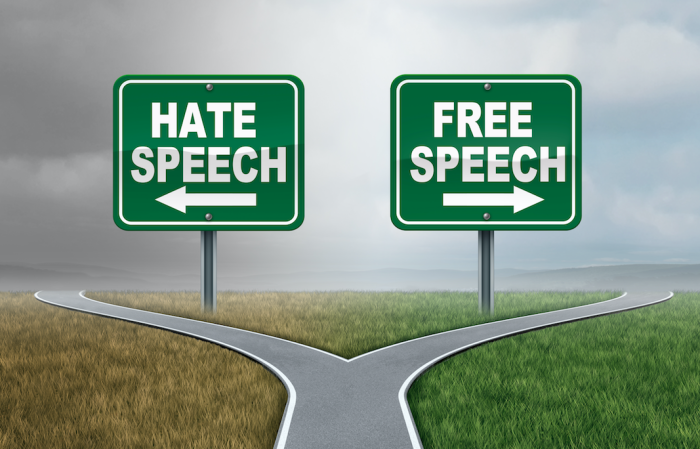 Hate speech ain't free (except in the U.S.)

Ira Lacher: Lawmakers in Canada, the UK, and Germany "have accepted the premise that if you drop a hammer from the 15th floor of a building, you don't need to look down to know the hammer has fallen." -promoted by Laura Belin

There's a new law in Iowa. Under the guise of promoting free speech, it's intended to give free reign to those who, under cover of the First Amendment, deliver hate language on college campuses.

The legislation reads, in part: "[I]t is not the proper role of an institution of higher education to shield individuals from speech protected by the first amendment to the Constitution of the United States, which may include ideas and opinions the individual finds unwelcome, disagreeable, or even offensive."

The law permits colleges to restrict hate speech only if that speech contains "a threat of serious harm and expression directed or likely directed to provoke imminent unlawful actions." But there's the problem: America, unlike other countries, does not define such language, much less outlaw it.

The Supreme Court of Canada said hate speech inspires "a most extreme emotion that . . . if exercised against members of an identifiable group, implies that those individuals are to be despised, scorned, denied respect and made subject to ill-treatment on the basis of group affiliation."

The UK defines hate speech as language intending "to stir up racial hatred, or . . . having regard to all the circumstances racial hatred is likely to be stirred up thereby."

German law says an offender is someone who "incites hatred against a national, racial, religious group or a group defined by their ethnic origins . . . or calls for violent or arbitrary measures against them . . ."

The U.S. does not have hate speech laws, says Nadine Strossen, a constitutional law professor at NYU Law School, because hate speech is subjective and open to interpretation. "[T]he Supreme Court never has created a category of speech that is defined by its hateful or hated conduct, labeled it hate speech and said that is categorically excluded from the First Amendment," she told NPR last June.

She went on to say,

So speech cannot be punished just because of its hateful content. But when you get beyond content and look at context, speech with a hateful message, along with speech with any other message, may be punished if, in a particular context, it directly causes certain specific imminent serious harm, such as a genuine threat that means to instill a reasonable fear on the part of the person at whom the threat is targeted, that he or she is going to be subject to violence.

The hate speech laws of Canada, the UK, and Germany seem to do exactly that. Lawmakers in those countries have accepted the premise that if you drop a hammer from the 15th floor of a building, you don't need to look down to know the hammer has fallen.

If a person with millions of Twitter followers declares repeatedly that Muslims are terrorists and the news media are the enemies of the people, it doesn't take a genius to predict that someone with a gun will be inspired to shoot up a mosque, or a newspaper office.

Strossen argues that the best defense against hate speech is more education. But in this era, when Americans' support for basic constitutional values is declining, that ship may have sailed a long time ago.

Freedom of speech is not absolute. You can't yell fire in a crowded theater, advocate for overthrowing the government, or joke about bombs on a commercial flight. But inciting violence against Muslims, Jews, women, gays and journalists is protected speech? Don't you see something wrong here?