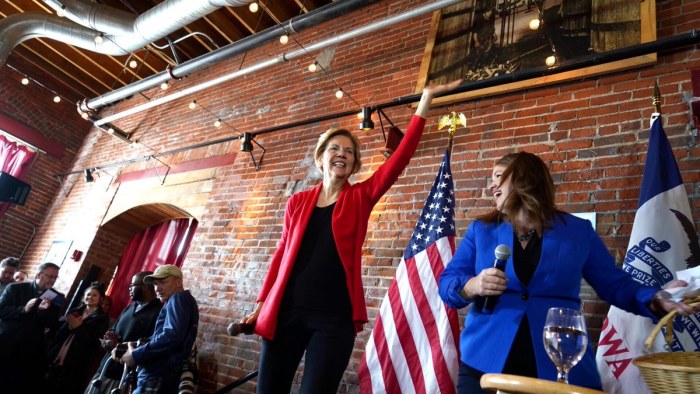 Elizabeth Warren is running to do the job

Dubuque Democrat Rachel Wall didn’t plan to commit to a candidate this early but “lost my own bets with myself” after seeing Elizabeth Warren in person last month. -promoted by Laura Belin

I will preface this piece by stating my only commitment for the 2020 cycle was to caucus for a woman. Some may say that is blind feminism, but it is the promise I made to myself. In order to normalize women running for all offices, I made that pledge.

At one point, I was very excited about Senator Amy Klobuchar, but that fizzled not only when I read stories of her treatment of staff, but also her family leave policy for her own staff (which she has since addressed). Besides that, I had no particular ties or fondness for a candidate. My plan was to continue to be courted by candidates; and to attend as many events as I could within a 30-mile radius of Dubuque, as someone juggling a full time job, a 9-year-old, and a 10-month-old.

Through the candidate announcements in January and February, I felt myself thrilled at the wealth of female candidates, but continued to have no strong pull towards one campaign. Towards the end of February, I was contacted by the Warren campaign about the event on March 1 in Dubuque. I was invited to meet Senator Elizabeth Warren prior to her town hall that day with a small group of volunteers. I accepted, and went into the meeting feeling flattered, but completely uncommitted.

Even through the meeting with Warren, I wasn’t moved to caucus for her. I enjoyed what she had to say, though it felt like the same vein of questioning, in many different forms from the group that met with her: “Are you electable? Can you beat him?” She answered them well, pointing out past precedent when she’d been discounted and come out victorious. I left the back of the event to attend the rally, thinking I could vote for her in a general, if she wins the nomination.

Then the town hall began. I listened intently (as I do with all candidates), and found myself enthusiastically nodding along. As the questions and answers continued, I saw Elizabeth Warren become someone I hadn’t witnessed before. She had not only an answer to every question, but enthusiastic and well-thought-out answers to each and every one. She didn’t stumble or hide behind one sentence quips. Warren knew her responses, making it clear that she’d been thinking about this for a long time. It was not only impressive, but incredibly inspiring.

It wasn’t all policy wonk either – I want to be clear on that. Warren gets a lot of credit (or accusations, perhaps) of being the one rolling out the policy, and I don’t see many mentions of how personable she is when she is talking to people. The way she speaks about her own back story, and how it has shaped her approach to the policies she’s rolling out made her an enjoyable, warm, and gracious speaker. The way she talks about “the mamas and the babies,” doesn’t come off as pandering; but a real and honest caring for women and children. It struck me, when I didn’t think I would be moved at all.

Throughout the rally, I found myself more drawn to her. However, it was one of her final statements on Medicaid that sealed the deal. I have never heard a candidate so clearly and eloquently discuss why expansion of Medicaid is important to all of us, not just those of us on Medicaid. It brought actual tears to my eyes to hear her speak about America needing to reframe Medicaid from an us vs. them debate. I have never cried at a political event, but there I was, welling up in front of political friends and strangers.

At the end of the event, I stood alone for a few minutes, weighing my feelings. I didn’t want to be committed this early in the cycle. After the heartbreak of 2016, I also didn’t want to have a candidate who I felt a lot of affection for. But in short – I lost my own bets with myself that day.

I left 95 percent committed, and have picked up the other 5 percent through watching Warren work her magic on CNN and drop more policies that not only make sense, but will bring about structural change that will benefit America for years to come.

It’s clear to me that Elizabeth Warren isn’t running in order to be president. She wants the job because she wants to bring about change. She wants the job to do the job; not for the glory. I will be in her corner next February, and I urge everyone in Iowa to pay attention to her. We would benefit from a candidate who can bring the phenomenal policy knowledge along with a tenderness and affection for us as people to the stage.

Editor’s note: Bleeding Heartland welcomes guest posts related to the Iowa caucuses, including but not limited to candidate endorsements. Please read these guidelines before writing.