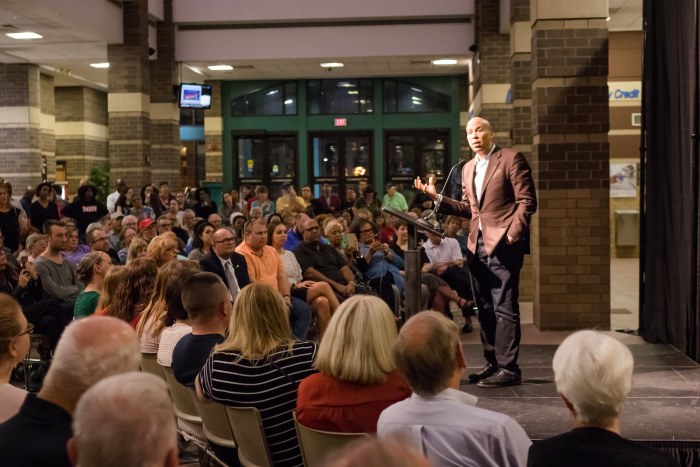 Bleeding Heartland published more work by guest authors in 2018 than ever before and is on track to set the bar higher this year.

With a record number of candidates seeking to take on Donald Trump and a more accessible Iowa caucus process, I anticipate massive engagement among Democratic activists. These rules and tips are for anyone who would like to contribute to this site's coverage of the presidential campaign.

Writers need not e-mail a draft or seek permission to pursue a story idea. But you do need to be a registered user to publish here. To avoid confusion over authorship, I ask writers to log in and post on their own accounts.

If you don't have a Bleeding Heartland account, I can set one up for you. Contact me with your preferred username (which will be visible to the public) and the e-mail address you want to be associated with the website (the public won't see that address).

Your username could be your real name or another handle that hasn't already been claimed on this site. Pseudonyms are allowed as long as the writer isn't trying to impersonate someone else or be a "sock puppet." I do not reveal authors’ identity without their permission.

After logging in, click "add new post" and start writing your text in the window. There is no minimum or maximum word length or standard format. You can save a draft to work on another day. Hit “submit for review” when you are ready to publish. The piece will be pending until I copy edit and move it to the front page.

My site only allows admins to upload images, so please send me (through e-mail or social media messages) any non-copyrighted photos that you want to include at the top or in the body of your piece. I will add them during the editing process.

Speaking of copyright, a news report or blog post can be the inspiration for a guest piece, but do not enclose lengthy excerpts or the entire text of copyrighted materials. Legal “fair use” involves posting a link to the original article and an excerpt of a few paragraphs. I will not publish material that crosses the line.

Bleeding Heartland welcomes any Iowa caucus coverage that is informative or fun to read. Topics of interest could include:

Advocating for a candidate

Although I copy edit every piece before publication, I try not to micromanage another author's "voice." Speak your truth in a way that feels authentic for you. This compilation from 2016 includes links to several Bleeding Heartland pieces advocating for Hillary Clinton, Bernie Sanders, or Martin O'Malley. For more ideas on style or format, click here to find endorsements of various Democratic contenders for governor in 2018.

Democratic candidates or their employees are welcome to post here. In order to avoid conflict of interest problems that have cropped up at other blogs, I ask paid campaign staffers or consultants to disclose that fact if they write about the campaign they’re working on. However, a person employed by a campaign can post anonymously about topics not related to that race.

Do not use this website as a place to dump news releases. It’s fine to use all or part of a statement from a candidate as a way to illustrate reasons you support that person, but add value with some additional commentary. I won't publish any piece consisting primarily of a campaign press release or e-mail blast.

You don't need to be supporting a contender to write about that campaign. For example, Ira Lacher recently published his take on Buttigieg.

Negative campaigning is a fact of political life, and I don’t have a problem with authors explaining why they don't support this or that person. But I ask authors to fight fair and do your homework before criticizing a candidate you dislike. On social media I’ve seen too many good Democrats spread inaccurate claims about certain candidates.

In addition, negative commentary about a candidate should be grounded in substance (a vote in Congress, a policy implemented by a governor or mayor, a previous public statement) or politics (misguided rhetoric or electability concerns). Colorful language is fine, but if your post is mostly name-calling or ad hominem attacks, I won’t publish it.

Comparing candidates on the issues

Many Bleeding Heartland readers are policy wonks and would enjoy reading analysis of several candidates' stances on climate change, containing college costs, or some other salient issue. For instance, more than half a dozen presidential contenders say they back "Medicare for all," but not all have signed on to the same legislation. Some are willing to accept intermediary steps toward that goal (such as lowering the Medicare eligibility age), while others favor a more sweeping plan that would virtually eliminate private health insurance.

First-person accounts from campaign rallies or house parties can be good material. One of Bleeding Heartland's most-viewed posts of 2016 was Pete McRoberts' view from "up close" at a Donald Trump rally. You can focus on the candidate's speech or add details about the atmosphere or audience reaction. Let me know if you need help uploading photos or audio clips, or embedding a video.

Feel free to write about local party fundraisers or other events featuring more than one contender. This post by Stephen Nein is a good write-up of a multi-candidate forum from the 2016 Congressional primary.

How candidates are presenting themselves in direct mail, or radio and television commercials, can be good fodder for a story. I like to know about message-testing polls in the field, so if you receive one of those, do not hang up the phone. Take detailed notes or record the call if possible, and write up what you heard. Earlier this year, Bleeding Heartland user corncam shared notes from a message-testing survey on behalf of Terry McAuliffe.

Top image: Get Out the Vote rally in Davenport featuring Senator Cory Booker on October 8, 2018. Photo by Emilene Leone, used with permission.