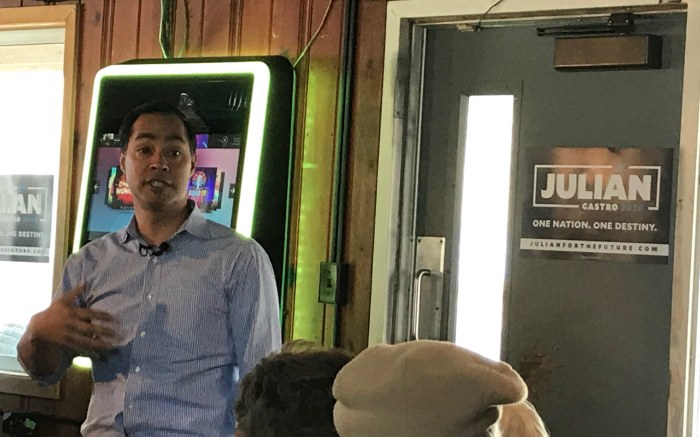 Julian Castro offers an immigration policy with an international approach

John Webb is a writer in Des Moines. Please read these guidelines if you would like to contribute to Bleeding Heartland’s coverage of the Iowa caucuses. -promoted by Laura Belin

Julian Castro has not yet caught fire in the mainstream media, and I think part of the reason is that he is not easily defined in neat and tidy terms. He is a product of public schools who went on to graduate from Harvard Law. He is the grandson of a woman who came to the U.S. at age 12 following the death of her parents. He is progressive and pragmatic in equal measure, yet he stresses bold policies to address big issues.

Julian Castro defies easy summation as a result of his expansive knowledge of the issues and familiarity with the ways they interrelate. To listen to Castro in an interactive Question and Answer session is to take a tour of a political theory that puts #PeopleFirst yet encompasses a succinct worldview that addresses a host of issues from Universal Pre-K to international cooperation and competition.

One thing that Julian Castro is doing is staying focused on the end goal of the whole primary process which is to run against and beat Donald Trump to become the 46th President of the United States. Yet he is not basing his campaign on declaring himself the anti-Trump. He seems to believe that creating a set of policies to demonstrate Trump’s lack of success in specific areas is a better way to draw attention to his differing approach.

Of course Castro is isn’t afraid to address Trump directly as dumb on any given policy or issue either. It is an interesting approach to the primary process, especially one in which the concept of “electability” seems to draw eyeballs to so many screens. Perhaps the Latino from Texas with the plans and vision to turn the ship of state back in a progressive direction might be the ultimate nominee? That is the bet that Castro seems to be making.

I’m going to start with this editorial from Pulitzer Prize winner Art Cullen in the Storm Lake Times.

If we want to begin to solve the refugee crisis of all Latin America, we should pay more attention to Julian Castro. The former mayor of San Antonio and Democratic presidential candidate has laid out a detailed vision that meets the promise of Lady Liberty and provides for our own sovereignty: provide a pathway to citizenship for otherwise law-abiding undocumented immigrants, assist refugees in seeking asylum, devote more resources for immigration judges and staff to process cases, and set new visa limits that recognize workforce demands.

Far from being an “open borders” policy, Castro’s plan looks to fundamentally re-organize the way we view and regulate immigration within a broader framework of inclusion and incorporation. There is the expansion of the asylum process and the creation of an immigration judiciary that is independent of the Justice Department. He proposes effectively abolishing ICE and re-assigning the various tasks of border enforcement to departments that can focus on the tasks of bringing immigrants into the broader society.

That means support for DACA (Deferred Action for Childhood Arrivals), even extending the definition of who is allowed to remain in the U.S. when it is the only country some immigrants have ever known. That means an end to the criminalization of undocumented immigration which Castro combines with a process to bring migrant labor out of the shadows and into our society. He also stresses creating ties between immigrants and their new communities, a key factor in keeping them involved in the legal path to citizenship.

These policies stand in stark contrast to the Trump version of immigration policy. They also represent a departure from the immigration policy of the past several administrations. Presidents since Ronald Reagan have periodically offered immigration amnesties based on the admission that migrant labor was and is critical to so many of our industries.

But this wave of immigration is different from previous versions. We are seeing increasing numbers of families and unaccompanied children. Policies aimed at keeping undocumented laborers in check are not fit to address the humanitarian crises both foreign and at the southern border. Hence de-criminalization of the immigration process.

Immigration will continue be an issue for the United States amid both political and climate crises facing our neighbors to the south. Julian Castro looked at this issue and has made a proposal that seeks to change not only the vision but the administrative particulars of our immigration policy.

This is where the lens of Castro’s international approach comes into play. While simultaneously re-engineering our immigration system, Castro envisions a foreign policy in Central America that recognizes both its problems that lead to emigration and its strategic importance on the world stage.

Castro is quick to point out the dangers of repeating interventionist policies of the past and is cautious not to suggest installing pro-US governments with military force or CIA influence. His plan involves strategic use of resources in aid and partnership with the nations of Central America that strengthens the safety, security, and strength of all participants.

Make no mistake: Castro is a capitalist. Yet he adopts a people-centric approach that seeks to keep the profit motive from being the only measure of success. He is a fan of international trade and advocates for Green technology and jobs that will ensure that US citizens are helping drive the energy future. Castro is also quick to point out that China has been focusing on economic relationships in Africa and Latin America and that the US needs to pay attention to that.

Again from the Cullen editorial.

Castro deserves our admiration for carrying the flag on immigration in a way that appeals to our patriotic sensibilities and pride. He not only condemns Trump’s policies as racist, amounting to state-sponsored kidnapping in violation of domestic and international law, but he paints a vision of a nation that once again embraces all people, including the indigenous, as full stakeholders in freedom as a basic human right.

My apologies for the length of this diary, but Julian Castro is building a campaign that makes short analysis pieces difficult to write. He is building a strong vision based on core principles of inclusion and humanity. Thanks for taking this deep dive with me.

There truly is no substitute for listening to Julian Castro speaking on his own behalf. He excels in the long form interview and takes questions thoughtfully and considerately. The Breakfast Club interview demonstrates his ability to participate in a free flowing discussion among many participants. It seems that his executive experience places him at ease discussing ideas and policies.

This recent interview with David Axelrod at the University of Chicago allows a deeper dive into Castro’s breadth and depth of knowledge from the broad overviews to granular detail. This is a pretty wonky discussion of policy, in my opinion, but that is a good thing. I would recommend viewing this interview to anyone that looks for a candidate with knowledge and eloquence.

I want Julian Castro on the debate stages this summer.

I have asked my friends and family to consider small donations.

Now I am asking you.

To contribute to the campaign please visit ActBlue to help ensure this candidate a place in the national debate.

Trust me that he is preparing to push that debate forward.

First published at Daily Kos with the same byline and slightly different title. John Webb is a former chef and writer who moved to Des Moines in 2017. He’s a longtime Democrat with a particular interest in health care and is not currently working for any campaign.