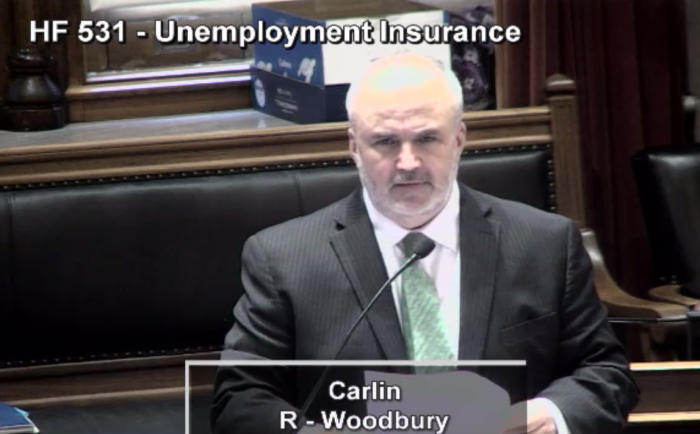 UPDATE: The House did not take up this bill before adjourning for the year on April 27. It will be eligible for debate during the 2020 session.

Iowa Senate Republicans voted on April 25 to combine and approve two bills designed to reduce unemployment benefits. The legislation had been stalled for weeks.

House File 531 started as a disastrous proposal to deprive most beneficiaries of one week of unemployment payments and to reduce benefits to jobless Iowans with more than two children.

As Bleeding Heartland discussed here, House Republicans dropped the bill's worst provisions, leaving language to shorten eligibility from 39 weeks to 26 weeks for people who were unemployed because of a business closure. After passing the House along party lines, the bill cleared the Senate Labor Committee in time for the second "funnel" deadline. But it had been sitting on the "unfinished business" calendar since April 11.

It removes the additional 13 weeks of unemployment benefits for plant closures. With the unemployment rate this low, and the amount of skilled labor jobs available, employees shouldn't have a hard time finding a job. [...]

"Common sense" is in the eye of the beholder. When a large number of people in one city lose their jobs at the same time, it stands to reason that affected workers may have more trouble finding new positions.

Democratic State Senator Bill Dotzler zeroed in on that point. Given Iowa's low unemployment rate, workers "should" be able to find new jobs.

But when you're talking about plant closings, that can be a very difficult and different thing. If you take a look at what happened in Webster City because of Electrolux, Webster City isn't that huge a town. And really that town relied on that manufacturing facility.

When you close a plant down, and hundreds of workers are laid off in a community, those communities cannot absorb those workers. And as workers could go to different parts of the state, it's difficult to sell homes to be able to move.

And this unemployment insurance isn't just about the worker. It's also about the community. Think about it: all the small business that were in those type of communities, that are kind of a one-horse type town, where a manufacturer leaves, what happens to those businesses when those workers are chased out of town immediately? [...]

So the unemployment benefits not only benefit the worker and their family, it benefits the community in the long run, so that they still have--be able to feed and buy groceries and take care of things to support their family [...].

Carlin had mentioned the bill would save an estimated $5 million a year, according to nonpartisan analysis. Dotzler pointed out that Iowa's unemployment insurance trust fund is "one of the most solid in the nation." But if legislators want to shore up the fund, they should "go after those companies that misclassify workers" as subcontractors to avoid paying into unemployment insurance or workers' compensation.

In his final remarks for the bill, Carlin said the extra thirteen weeks for Iowans affected by business closures were added to the code "when the economy was down." He claimed the need had passed, since "right now, we do have the lowest unemployment rate in the country."

"A DANGEROUS STANDARD" FOR WORKER MISCONDUCT

During the debate on House File 531, Carlin offered an amendment containing what he described as "a much-needed provision defining misconduct." The language came from Senate File 561, which Senate Republicans approved last month along party lines. The House Commerce Committee advanced the legislation, but it has been sitting on that chamber's "unfinished business" calendar for two weeks.

Carlin argued, "One of the realities is, whether somebody's disqualified or not [from unemployment benefits] is largely determined, almost exclusively determined by misconduct, so having that defined is a good thing." His amendment included sixteen examples of misconduct, enclosed in full at the end of this post.

Speaking for Democrats, State Senator Todd Taylor noted that lawmakers had been working on misconduct language for some time. When the chamber debated Senate File 561, Senator Tony Bisignano had quipped that GOP floor manager Jake Chapman took "a very horrible bill and made it just bad."

Taylor appreciated that Carlin's amendment pared down the original list of 20 types of misconduct. But he argued that the bill was unnecessary, since "The current system for defining misconduct is not broken. You will lose your benefits if you engage in misconduct that's proven."

Unemployment cases "should be evaluated individually," Taylor added. Adopting a long list of exclusions "will hurt workers when we experience an economic downturn."

Although he expressed respect for Carlin as "a thoughtful legislator," Taylor asserted,

This proposal before us is nothing more than the GOP permanently altering the code because one business got to fire someone and then had to watch them get unemployment compensation. You lost a claim, and now you want to change the code.

Side note: Another example of that dynamic played out when statehouse Republicans approved a new restriction on workers' compensation benefits because of an Iowa Supreme Court decision on one man's appeal. This week, Governor Kim Reynolds signed that bill, which Bleeding Heartland discussed in the second section of this post.

In closing, Taylor said, some actions "should cost people their job" but not the ability to cover essentials for themselves or their families while they seek new employment.

Carlin countered, "Something this important needs to be defined by the General Assembly to ensure accountability." The Senate approved his amendment by voice vote.

Democratic Senator Nate Boulton, who has practiced employment law for years, warned that the bill "will disqualify Iowans from unemployment benefits that they need to get by at a critical time in their life." The amendment "sets a dangerous standard" by defining "anything other than full-throated loyalty from every employee" as misconduct.

Under the bill, it would be misconduct for an employee to use slanderous or libelous language or create "dissension or animus against the employer," Boulton said. So a frustrated worker expressing those feelings to a colleague could lose future unemployment benefits.

"That's a dangerous place for us to go," Boulton said. Employees would be expected to "toe the line" and endure abuses, or risk their job and their future economic security if they speak up about problems at work.

Delivering his final remarks for the bill, Carlin claimed that under current law, the standard for misconduct is so high that "your behavior has to be tantamount to ridiculous" not to qualify for unemployment. While he acknowledged his Democratic colleagues' heartfelt concern for workers, Carlin asked them to remember what business owners go through. "It is hard in Iowa to fire bad employees."

All 32 Republican senators voted for House File 531 on final passage, while the chamber's eighteen Democrats voted no. The revised bill goes back to the lower chamber rather than to the governor's desk. I will update this post as needed.

Appendix: The new definition of employee misconduct, which Senate Republicans added to House File 531 on April 25