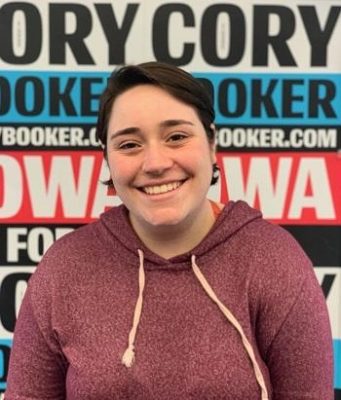 Cory Booker will build a brighter, greener future with us

As an Iowa caucus-goer, member of the Iowa Democratic Party’s State Central Committee, and young person, I know we are all excited to be in Iowa during what could be one of the most important caucuses of our lifetime. We are fortunate to have such a deep and talented field of Democratic candidates this cycle, many with well-thought-out policies to unite and strengthen our country for the future. As I carefully assess the current field, I am filled with hope and excitement.

Deciding among these candidates can seem like an insurmountable task, so I wanted to take a moment to share with you why it was a no-brainer for me to support U.S. Senator Cory Booker as the next president of the United States.

There are many issues which I am passionate about, but none more than promoting conservation, protecting our environment, and battling the existential crisis of my generation — climate change. I know we need a leader with a proven track record and bold ideas to tackle these issues. Cory Booker is that leader.

Throughout his career, Cory has taken significant steps to promote environmental justice and stand up against the threat of climate change. Cory led the fight to ban oil drilling off the Atlantic coastline, hold polluters accountable for the cleanup of contaminated sites in our communities, and improve air quality in order to stem elevated asthma rates that disproportionately impact children in underserved communities.

Cory also stood in strong opposition to the Trump administration’s ill-advised decision to withdraw from the Paris Climate Agreement, because he knows how important it is for the United States to be a leader in our collective fight against climate change.

Access to clean air and clean water shouldn’t be based on your zip code, which is why Cory is leading the charge to eliminate environmental injustices that far too often disproportionately impact low-income communities.

As mayor, Cory worked to clean up contaminated sites in Newark, launched urban farm initiatives to promote healthy food options, and added acres of parks in communities that desperately lacked open space. These steps not only spurred economic opportunity and created jobs, but they also increased the quality of life for families across the city.

While Cory continues to criss-cross the country this week laying out his plan to address environmental injustices in our nation, we are reminded of the importance of standing up for some of our most vulnerable communities. I understand that environmental justice and social justice are intertwined, and both issues need to be addressed immediately. Cory is the right candidate at the right time to take on this challenge.

It’s important to note that Cory’s mission isn’t limited to the public arena. He has created a culture of kindness and inclusion on his presidential campaign that is unmistakable. He takes time to meet with every supporter and volunteer he can to let them know they are appreciated and valued. He sees the dignity in every person he meets, and his leadership reflects that.

I’m confident that if we elect Cory Booker as our next president, our Democracy will be stronger, our environmental justice solutions will be bolder, and my generation will have a more sustainable future.

I encourage each and every one of you to join me at a Cory event and give him the chance to earn your support, too.

Landra Jo Reece is a first-year student at Drake University studying Environmental Science and Law, Politics, and Society. She serves on the Iowa Democratic Party’s State Central Committee representing the fourth Congressional district. While she has attended the caucuses many times, 2020 will be her first experience as a caucus participant.

Editor’s note: Booker has been highlighting his environmental plan in speeches this week. The campaign released this summary on April 25.

Columbia, S.C. — At stops in South Carolina today, Cory Booker is discussing specifics of one component of his environmental justice agenda. He will outline the steps he would take as president to undo the damage done by the Trump administration and protect vulnerable and marginalized communities by strengthening the power of the Environmental Protection Agency (EPA). Communities of color, low-income communities, and indigenous communities have disproportionately suffered with environmental and public health issues as a result of unchecked corporate polluting and the systematic rollback of protections by the Trump administration.

“The Trump administration has gutted the EPA, rolled back clean air and clean water protections, and allowed polluters to go unchecked, causing immense harm and suffering by vulnerable communities,” said Cory Booker. “We cannot and will not stand by while polluters poison our children and make our air unbreathable. This injustice must end. As president, I would take immediate steps to protect and defend struggling families by strengthening the EPA’s enforcement power, forcing those responsible for pollution to pay for cleanup and abatement, and putting an end to the poisoning of communities like mine in Newark and so many in South Carolina. This is a national and global emergency, and it’s time we had a president that treats it as one by ending and preventing future destruction by corporate polluters.”

As president, Cory would protect traditionally vulnerable and marginalized communities that have disproportionately felt the impact of corporate pollution by punishing and holding polluters accountable. This includes:

Since January 2017, the Trump administration has rolled back its enforcement of anti-pollution laws. Last year, the EPA conducted less than half the federal inspections and evaluations it did in 2010, and collected just $3.95 billion from polluters for injunctive relief—including the lowest amount in fines to polluters in the 15-year existence of the enforcement office. Pollution cases referred to the Department of Justice for criminal prosecution stand at their lowest level since 1988.