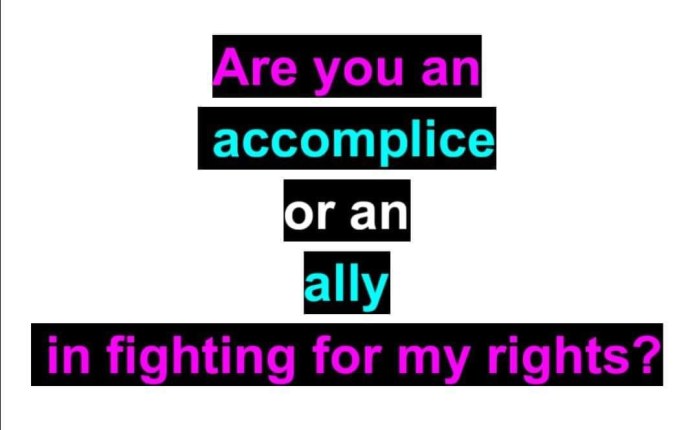 I don't want allyship when it's conditional

You’ve heard in the past about trans people becoming targets for hate crimes, but their stories are largely ignored. You may be part of the LGBTQIA+ community, and you may even give your one day of support to stop trans people from being murdered, but will you continue being supportive of your trans siblings? Are you a genuine “ally”?

Being an ally has become a label to convey that you support a cause. It doesn’t really say you will be an outspoken advocate for that cause and fight for the cause you claim you are fighting for.

I do not think you are doing enough for a cause unless you are an accomplice in the fight. For trans people, having allies isn’t enough in my opinion. Trans women of color are being slaughtered, barely making the media. When it comes to the media we hear about how the mainstream of the LGBTQIA+ community takes on the issue for maybe a day or even an hour of their time.

If you are reading this, you may be thinking, “This woman is radical for using the word ‘accomplice.’” And you’re probably right–I am radical. Fighting for my rights as a trans woman is radical. Many people are fighting against my rights, from trans exclusionary “radical” “feminists” to right-wing media. We really need to forget about the “radical” part. Being radical is life if you are dedicated to fighting for the liberation of people who are marginalized like trans people.

My question for you: if you consider yourself an ally, is your support conditional? That is, are you just an ally? Or are you fully supportive of the liberation of marginalized folks, considering yourself an accomplice in this fight?

Top image created by the author, used with permission.