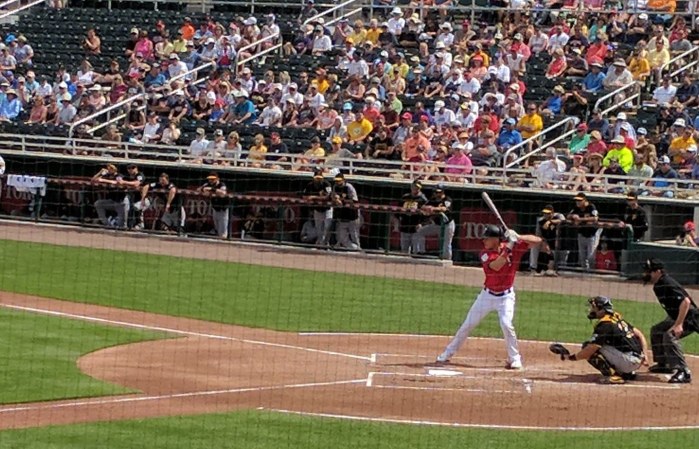 Bruce Lear: “Swinging for the bleacher seats every time will often leave a player sitting in the dugout with a sore back. The same is true for candidates.” -promoted by Laura Belin

I love baseball. It’s a game of chess with four bases on a field instead of knights and rooks on a board. The object is to defend against runs and advance your runners around the bases. An easy game? No!

It has no clock, so the game isn’t lost until the final out at the plate or in the field. It’s slow. It’s methodical. It’s a game of statistics. The season is 162 games, so there are times of utter despair and utter joy.

James Earl Jones sums it up best in the now 30-year-old Iowa epic Field of Dreams:

“The one constant throughout the years, Ray has been baseball. America has rolled like an army of steamrollers. It has been erased like a blackboard, rebuilt and erased again. But baseball has marked the time.”

For me, baseball is a lot like politics. Winning is based on a strategy about finding that sweet spot in a very long season. It’s slow. It’s methodical. It’s based on statistics we call polls.

This year’s crop of Democratic candidates could perhaps learn from baseball hitters through the ages. Remember, Babe Ruth led the league in home runs but also in strike outs. In politics when there is a binary choice between candidates, too many times waving or watching a fast ball or curve might get you a gig on CNN or Fox instead of the Presidency.

Let me stop my analogy here and offer this disclaimer. I’m not talking about how to win a primary, and I am not aiming at any candidate in the Democratic field. I strongly believe every one of the 21 would make a better president than the one who currently watches TV in the West Wing. I’ll make my knuckles bleed knocking doors to elect the Democratic nominee. That’s what a pragmatic progressive does.

Swinging for the bleacher seats every time will often leave a player sitting in the dugout with a sore back. The same is true for political candidates. For example, I love the idea of free college tuition for everyone, but instead of going for the grand slam, maybe it would be strategic to get someone on base and then move the runner.

This could be done by reducing the cost of college for middle- and low-income families, allowing them to once again qualify for Pell grants, low interest loans, work study, and tuition assistance. Those were available when I went to college, or I would not have been able to go. It may not be a homerun, but it puts working families in a position to score. It’s a step in the right direction. People need skin in the game, but they don’t need to be skinned.

This approach doesn’t roll off the tongue easily; it’s not sexy, but it won’t scare away the suburban independent moms who helped flip the House in 2018. Democrats largely didn’t take back the House with ultra-progressive votes. We won the House with disillusioned Democrats coming home and independents deciding they were fed up with Donald Trump.

I am afraid quite a few voters see free college as simply too good to be true, and know they will be paying with higher taxes. It allows the other side to paint us as wanting something for nothing, when what we really want is for young people to graduate not being burdened with a debt they can never repay. Baseball folks know that putting a runner on second is a better long-term strategy than trying to win with one swing.

Climate change is a very real and urgent problem, but so far, the Green New Deal is not well defined. That allows the Trumpsters to define it for the public. In baseball, if the runner doesn’t understand the signals, they don’t know the strategy.

In politics, there needs to be grassroots momentum behind something this big. Right now, the average person doesn’t understand what the Green New Deal is. Long term, we need to get the public on board with the strategy, while taking immediate steps to repair the damage this administration has done to our planet.

The midterms proved health care is a winning issue for Democrats. Baseball teams that consistently win use the same formula over and over again. My only caution is just saying “Medicare for all” isn’t enough to win. The concept must be clearly defined.

Those on Medicare know it doesn’t cover everything. You need a supplement to fill the gaps in coverage. Democratic candidates could get into position to score with the idea of expanding the Affordable Care Act to include a public option which would be Medicare and an option for an affordable optional supplement. That idea makes it much more difficult for the other side to claim our candidates are socialists bent on destroying capitalism.

Like baseball teams, Democrats need to use the home field advantage. The Democratic advantage should be in public education because the other party has clearly staked its future on private and charter schools. Democratic candidates need to champion public education as an economic development engine for rural America.

The first step would be to provide some type of incentive to avoid the looming teaching shortage in this country. America does not need rural abandoned school buildings. We need the Friday night lights burning and the classrooms filled with the future.

Finally, there is the issue of name calling. A name calling politician might get some cheers from his/her base, but that’s a lot like asking your mom if your haircut looks good. You’ll feel good because of what she tells you, but you’ll still have a bad haircut.

Getting down and wallowing in the mud may feel great for a while, but eventually a candidate has to wash the mud off and govern. A better strategy might be to own the president’s name calling. Make a joke of it. Put it on a t-shirt. Disarm the bully by laughing at him. Baseball fights are usually a lot of wrestling with a couple of punches snuck in. The same should be true in politics.

In baseball, true hitters also know you can’t swing at every pitch, even if the pitch is a strike. Democratic candidates cannot afford to take a swing at every ludicrous Trump tweet made at 2:00 in the morning. He does it to distract from what really matters.

Trump has never been afraid to throw at his opponent’s head. Democrats need to learn how to stand in but also how to dodge a pitch. Our side needs to work to brush him back when he goes too far without writing a ten-page position paper to do it.

In short, Democrats need to keep their eyes on the ball. The candidate who centers his campaign message on bringing America leadership back through honesty, transparency, and ethics while moving the country forward toward affordable health care, safer streets, attention to the environment, public education, and an economy driven by hard working families, will be able to dance a victory dance on home plate in November 2020.

Top image: Cropped from a photo by the author of a spring training game between the Twins and the Pirates, published with permission.