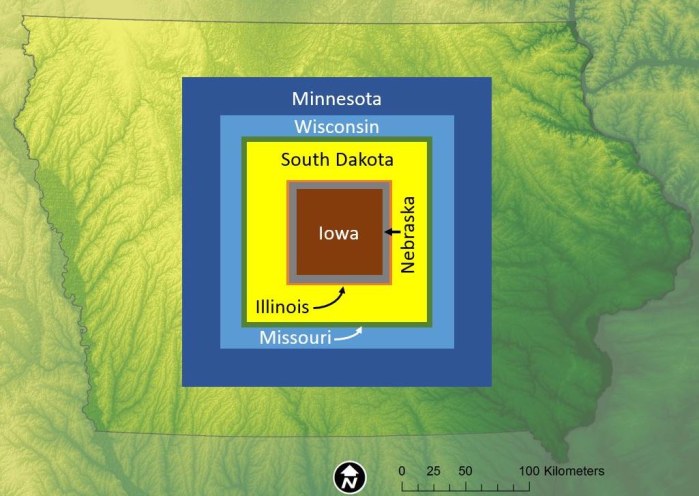 Chris Jones is a research engineer (IIHR-Hydroscience and Engineering) at the University of Iowa. An earlier version of this post appeared at the author’s blog. -promoted by Laura Belin

You may have heard that the Iowa legislature passed legislation this year regarding public land acquisition in Iowa. I thought I would throw some numbers and images at that discussion.

You’ve probably heard, like me, that Iowa does not have much public land and that we are pretty low on the totem pole in this regard. But since it is risky to just go by things you’ve heard, I did a little digging.

There are a couple of ways to look at this: (1) the total amount of public land area and (2) the percentage of the state’s total area that is in public hands (local, state, and federally-held lands). 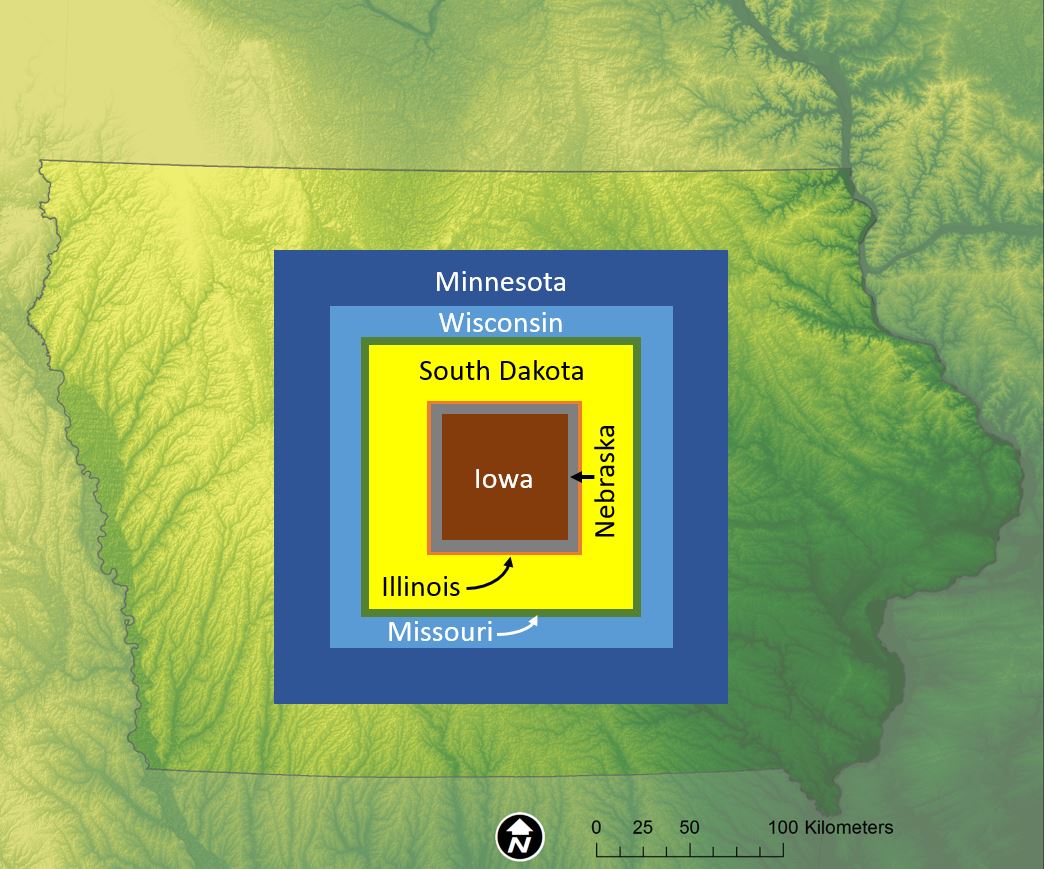 Each square represents the public land areas in Iowa and its bordering states, and is scaled to Iowa’s total area. For reference, Iowa’s land fits into a 40-mile square; Minnesota’s into 143-mile square.

Iowa has 1,576 square miles of public land, which is eighth smallest of all the states. Six of the states that are below us (Rhode Island, Delaware, Connecticut, Massachusetts, Maryland, and Vermont) are all small states, the biggest of which, Maryland, is about the size of 22 Iowa counties combined.

The very small states of New Hampshire, Hawaii, and New Jersey all have more public land area than Iowa. Hawaii and New Hampshire did not surprise me, but New Jersey did, considering that most people have a vision of New Jersey as a concrete-covered metropolis.

The other state that is below Iowa in public land area—Kansas—is bigger in total area, about 1.5 times bigger. An agricultural state like Iowa, Kansas has 13 square miles less public land than we do. In terms of the percentage of state area in public hands, Iowa fares worse. We are third-lowest after Rhode Island and Kansas, with 2.8 percent of our land in public hands. 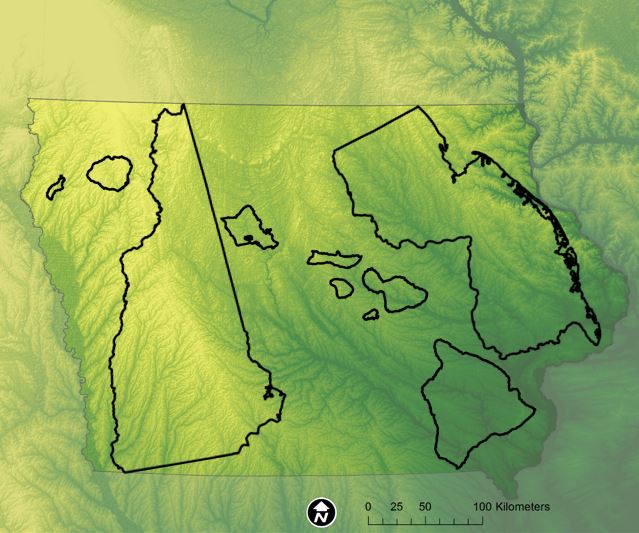 New Hampshire, Hawaii, and New Jersey each have more public land than Iowa. All are to scale.

An important question is, what do your public lands look like? Like me, you might have guessed a lot of it is in state parks, but in fact only about 6.7 percent of our public land lies within state park boundaries (about 68,000 or 106 square miles). Thus all our state parks would about fit into a square 10 miles by 10 miles, about the size of the cities of Des Moines and Urbandale combined. A much larger area of public land, about 585 square miles, comprises Iowa’s Wildlife Management Areas.

The balance of our public land lies within city and county parks, state forest land, land that is home to public buildings, and road easements (about 50 percent of our public land is in road right of ways). And a fair amount of public land is farmed. Yes, you read that right: farmed. Of the state’s land holdings, about 29,000 acres are in the DNR’s land lease program. Of this, about 17,000 acres are in row crop, 10,000 acres in other crops, and about 2000 acres are currently idle. If it were all in one place, this farmed, state-owned land would be more than three times larger than our largest state park (Yellow River Forest Camp).

In total, state-owned land managed by DNR comprises less than 1 percent of the state’s area and, suprisingly (to me anyway), 8 percent of this DNR land is farmed.

You might wonder if and how this all relates to water quality. In the Iowa Nutrient Strategy Science Assessment, land retirement is the most effective strategy for reducing nutrients (nitrogen-N and phosphorus-P) in the state’s streams, with an expected reduction of 85 percent for N and 100 percent for P.

We also know that the fraction of land in row crop production relates very strongly to stream nitrate levels, something we call the Schilling equation, named after my colleague, state geologist Keith Schilling. He and the previous state geologist, Bob Libra, published a paper almost 20 years ago that demonstrated that multiplying a watershed’s row crop fraction by 10 would roughly estimate the stream N concentration at the outlet, thus 50 percent (0.5) in row crop would produce a nitrate concentration of 5 ppm. This applies statewide as well, with about 67 percent of the state’s land in row crop and the long-term statewide average stream nitrate in the neighborhood of 6-7 ppm.

Another thing to remember here is that natural lands have a “halo” effect in that they enhance environmental conditions in areas around them. This is clearly noticeable to the physical senses when traveling to places like Minnesota and Colorado, both of which have nearly double the population of Iowa but far more public land. Natural lands restore hydrology, moderate climate, store carbon, reduce flooding, provide habitat and all sorts of other visible and invisible benefits to the areas where we live and work.

To finish, this might be a good time to mention the long-forgotten Iowa Open Spaces Plan (pdf). In 1987 the Iowa legislature addressed the perceived need for additional open spaces in Iowa. They directed Iowa DNR in House File 620 to “prepare a statewide, long-range plan for the acquisition and protection of significant open space lands […].” such that 10 percent of the state’s area (5600 square miles) be included under some form of public open space protection by the year 2000 (that would make our square about the size of South Dakota’s in the above map).

Then Governor Terry Branstad signed this bill during the second of his six terms. As the maps above show, the open spaces plan didn’t come close to happening.

Public land data from US Bureau of the Census, Statistical Abstract of the United States.
Schilling, K.E. and Libra, R.D., 2000. The relationship of nitrate concentrations in streams to row crop land use in Iowa. Journal of Environmental Quality, 29(6), pp.1846-1851. 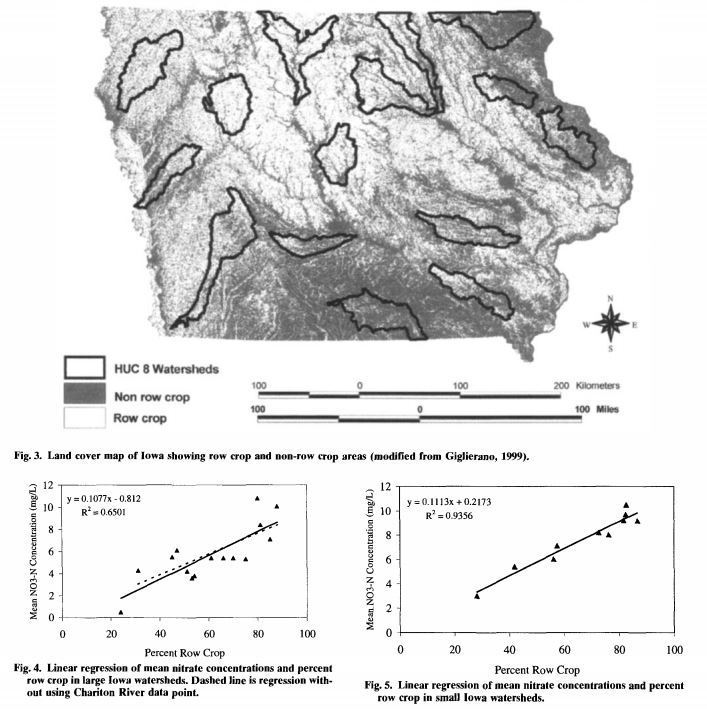 Graphs from Schilling and Libra (2000), showing the link between cropped area and stream nitrate.