I'm not prone to cliches, but I can't get this one off my mind: You can't teach an old dog a new trick. Witness hapless U.S. Representative Steve King (R-Eighteenth Century), who despite public chastisement by fellow House members for his comments in support of white supremacy, was again unable to conceal his propensity to think outside the sanity box.

Last week, King posted a meme on Facebook showing Julius and Ethel Rosenberg, who during the early years of the Cold War were executed for treason. The meme also features Bill and Hillary Clinton, noting that they are "still running free," accompanied by "#LockHerUp." 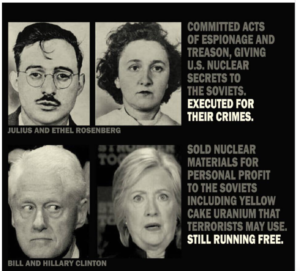 And why does King believe the Clintons should be locked up? He apparently buys the meme's reference to a conspiracy theory claiming the Clintons sold uranium to the Russians, long-since debunked. How debunked? Even Fox News host Shepard Smith rejects the accusation.

The meme's clear implication is that the Clintons deserve the same fate as the Rosenbergs -- execution. In an age where the radical fringe feel emboldened to act violently against leaders and entire classes of people they disdain, King's meme is not only politically irresponsible, it's morally objectionable -- and deeply so.

King knows he's about to experience the election fight of his life, with three Republicans set to challenge him in the June 2020 primary. Most politicians, when threatened with electoral extinction, dive for that nebulous realm of messaging vagueness called "the center."

Not King. He doubles down on crazy talk, like fantasizing about killing liberals in a new civil war. Like insisting that an all-white society would be superior to others. Year after year, quip after quip, the crazy talk goes on and on.

Yup. If nothing else, one has to admire King for his consistency, honesty, and chutzpah. We'll see how those traits serve him in his upcoming election battle.

On this week's Fallon Forum, I discuss King's latest transgression. Also on the docket: