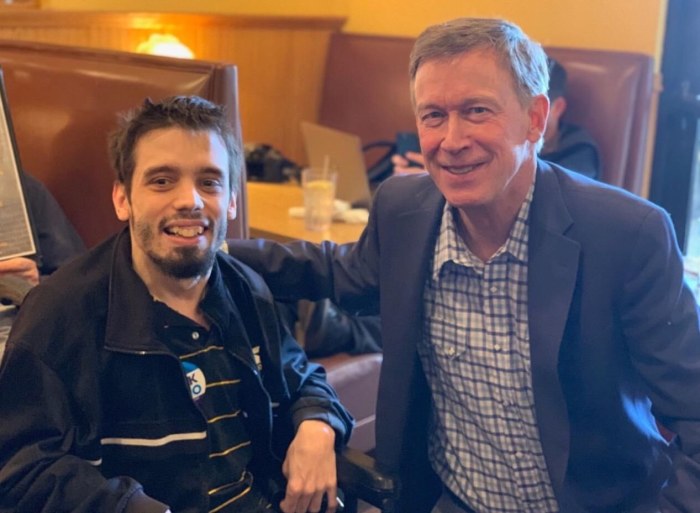 Tyler Mills is a Democrat in Keokuk (Lee County). -promoted by Laura Belin

John Hickenlooper is the voice the country needs right now. His bid for the Democratic nomination for president will move us forward, particularly when it comes to a policy discussion. His accomplishments as governor of Colorado from 2011 to 2019 are quite impressive.

The work Hickenlooper has done to make the outdoor industry comfortable with his approach to the Second Amendment is a clear sign of how he can lead during what may be a difficult situation. It also makes sense for people to highlight Hickenlooper’s conservation efforts. He launched a plan to make sure every Coloradan has a hiking or bike trail 15 minutes from their house.

Rural America has been struggling to find a way to maintain proper health care facilities. The governor was able to broker a hospital funding formula that makes Colorado’s Medicaid system more manageable for future generations. The Hickenlooper health care plan gave assistance to people earning between $48,000 and $60,000 per year. People who buy insurance end up getting direct checks in order to help offset some of the cost of the premiums.

Colorado has become one of the nation’s leaders in alternative energy over the last eight years. People incorrectly assume that Hickenlooper is anti-alternative energy due to his background as a geologist, but the work of his administration says the exact opposite of that. His work with Republican Governor John Kasich of Ohio at the National Governors Association to advocate for Medicaid expansion across the nation should also be commended. The goal of universal health hcare is crucial, and this is a minor step towards that, one that should be embraced by a clear majority.

Why is John Hickenlooper’s candidacy unique? Because he is a business owner with government experience. The last two-plus years has made being a businessperson a bad thing in many different circles. Governor Hickenlooper has not forgotten the vulnerable within the state of Colorado as he has managed the finances of his fine state. His background in energy production may be a detriment in some people’s minds, but the truth is that the country needs a comprehensive energy plan. Natural gas and nuclear power need to be a component of our ability to survive as a civilization.

Hickenlooper has been one of the staunchest critics of President Donald Trump’s trade war. He consistently brings up how the trade war has hurt electronics companies in Colorado that need a stable supply chain, and how that chain has been disrupted, making it harder to be productive. He has been critical of the left’s point of view on trade, saying that it is creating a certain amount of division around the world.

His recent remarks at the Chicago Council on foreign policy will not excite progressive voices within the labor movement. They don’t thrill me either, but once people look at the governor’s entire record, they will understand that there is no better candidate in the field on worker’s rights and actual wages. A large number of candidates have talked the talk when it comes to treating workers with dignity, but if you look at John Hickenlooper’s time owning Wynkoop Brewery, he has actually walked the walk.

He has also come forth with a fierce plan when it comes to challenging the overall size of large companies within the banking and tech industries. Hickenlooper’s white paper on monopolies calls for the Federal Trade Commission to begin tracking the overall size of companies, making sure they do not squeeze out their smaller competitors with undue influence in the government. Obviously, some mergers are horrendously bad for consumers, limiting their choices in the long run.

I was self-employed for ten years before taking a job with a large corporation. And I truly believe that John Hickenlooper will be the strongest voice for making sure small companies are able to thrive in the long run, by making it easier to get the necessary capital from small banks and credit unions in order to launch their firms.

He took the time to make sure Colorado’s companies were able to do one-stop shopping for all necessary licenses through MyBizColorado. We want the economy to grow; we want a way to pay for the new cybersecurity measures that the country needs. These challenges are why we need more startups throughout the country.

I want more communities to thrive. I want someone who puts together a comprehensive plan, so smaller communities are to maintain the revenue they need through sales taxes and property taxes. The current occupant of the White House merely rails against Amazon, without adequately addressing some of the creative destruction led by Amazon.

Editor’s note from Laura Belin: Bleeding Heartland welcomes guest posts related to the Iowa caucuses, including but not limited to candidate endorsements. Please read these guidelines before writing.