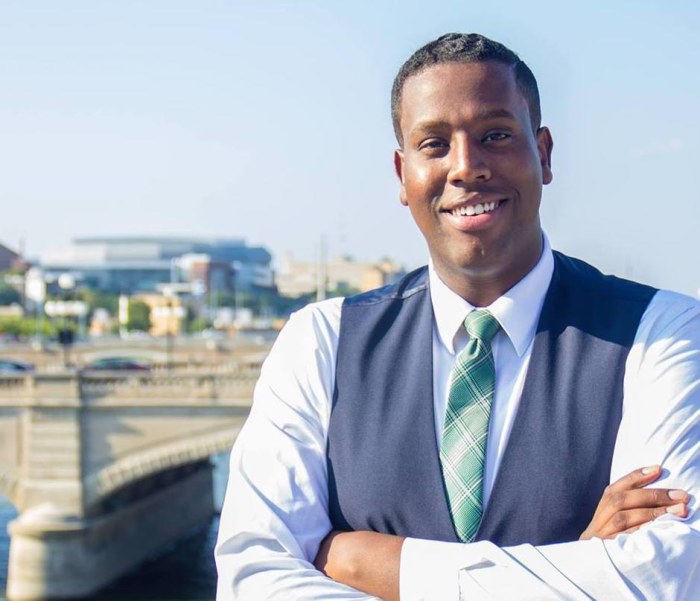 We all come to look for America

Abshir Omar "made a decision -- I would not stand idly by as the ladder was pulled up behind me and refugees across the world lost a chance at a better life." -promoted by Laura Belin

There are many times in my life where I’ve stopped to take a moment and reflect on how far I’ve come from my war-torn neighborhood in Mogadishu, Somalia. Today, on World Refugee Day, I’m taking a moment to reflect on my journey of fleeing from a civil war to seeking asylum in America and now, accepting a job to be Bernie Sanders’ Iowa Political Coordinator.

On Bernie Sanders’ Iowa team, I’ll be working to not only win the caucus in February, but to complete a political revolution that started right here in Iowa back in 2016. This political revolution is close to my heart because it is about more than just winning an election, it is about transforming our political system into something more inclusive. Where young Muslims have national leaders who support them. Where refugees see America as a place of opportunity, not xenophobia and hatred. Where working families don’t fear that their children might go hungry or without a good education.

That vision is why I had such pride when I told my mother about my new job, because together as a family we’ve persevered through times where those opportunities, these hopes and dreams, seemed so far from possible.

I was born in Somalia, just after rebels overthrew the government in the opening years of a civil war that is still being waged today. This violent conflict would eventually take the lives of my father, my brother, extended family members -- and most recently, in 2017, my brother-in-law Ahmed when two truck bombs killed over 300 people in the deadliest attack in Somali history. Ahmed had only been in the country for three hours on a trip back home from America.

After my father was killed, my mother and I fled the city, seeking protection through the United Nations High Commissioner for Refugees, or UNHCR. My mother had to walk through deserts, carrying me in her arms over more than 400 miles. Finally, we arrived at the UNHCR Dadaab Refugee Complex in Northern Kenya.

While Dadaab now holds over 200,000 fellow refugees and asylum seekers, the camp was in a far less developed state when my family arrived. We struggled to simply survive, let alone come to terms with the death of my father and the devastation caused by a war that would go on to claim roughly half a million lives of Somalis just like me, my mother, my father, my brother, my aunts, uncles and cousins. Every day, I am thankful that my mother took those steps and made the dangerous, trying journey from Somalia to Kenya.

After several years in Dadaab, we were blessed yet again when a Lutheran church in America sponsored our family to come to the United States. I was still only a child, but the generosity these American Christians showed a Muslim family in need made a lasting impact on how I viewed the United States. This was a welcoming land of opportunity, with good people who saw that we are all human, we are all endowed by God with unalienable rights and we all owe it to each other to reach out and help those who need it. Eventually, we were granted asylum as refugees, and we made another journey as a family, this time to the United States.

While we made it out of the refugee camp, we still had many challenges ahead of us as a family. My mother was a widowed war refugee who barely spoke English. She had to work two or three low-paying jobs, foregoing any rest or leisure on most days to make sure my siblings and I had a fighting chance. We struggled to put the basics on our table. I would come home from school, do my homework, and then help my mother on her work for her GED and ESL classes. I still look back at those days, how hard we were all working to get by, and I can only imagine how many other families are in that same spot across America today.

Eventually, I graduated high school and made it to Iowa State, which is quite a ways from Mogadishu. As I met more and more students who also came from disadvantaged backgrounds, I quickly became involved in student activism on campus. I served in student government, ultimately joining the board of the United States Student Association, the largest student association in the country. It was there that I started advocating for financial aid reform, protecting DACA recipients and a whole host of progressive issues. I started to meet incredible young people from across the country who were fighting for progress, and we were all so full of hope that things were about to get a lot better for people in need.

Then, in 2016, I began to worry about my future in this country. I first knew this nation as a place that welcomed my family, and thousands more like us, with open arms. But now I was seeing throngs of people chanting “send them back," cheering Donald Trump’s declaration that he’d impose a Muslim Ban and rallying around building a wall to block migrant children from fleeing violence -- just like I had to as a child.

When I hear reports of migrants walking thousands of miles to the southern border, I think of my mother walking through the desert with me pressed to her chest, hungry and dehydrated. When I see images of refugees stuck in make-shift camps along the border, I imagine what my life would be like if my family never made it to the United States.

This was a complete rebuke to what I have always known America to be, and I made a decision -- I would not stand idly by as the ladder was pulled up behind me and refugees across the world lost a chance at a better life. Members of my community who feel completely left out of the political process urged me to run for office. I ran for Des Moines City Council, advocating for a more just and equitable city. Prioritizing affordable housing, sustainable development that enfranchised the working poor and passing a Welcoming City resolution, I ran as the first Somali, Muslim, refugee candidate in Des Moines.

Through my campaign, we were able to change the narrative from a developer-centric conversation about our city’s future, to how we as a city could serve the needs of our residents, especially those most economically and socially disadvantaged. We organized, canvassed and developed relationships with diverse groups of Iowans, building a stronger city in the process. While we didn’t win on election night, the conversations we had were progress themselves, and we were proud of what we had accomplished.

On the Bernie Sanders campaign, we’re going to continue this work to change the conversation and bring in more people to take part in our democracy -- and we’re going to win.

We’re going to win because for people like me, and for so many other Americans of different race, creed, and color, there is only one candidate who can truly bring about a political revolution: Bernie Sanders. That’s why after fleeing Somalia, surviving a refugee camp and seeking asylum in America, I’m deeply committed to changing this world to be a better place where more people have their voices heard and have the opportunities I’ve had to better my condition and lift up others in the process. We all come to look for America -- and we must fight to ensure the America we find is one of greater inclusion and equality.

That is what this election means to me, and I’m excited to get back to work.