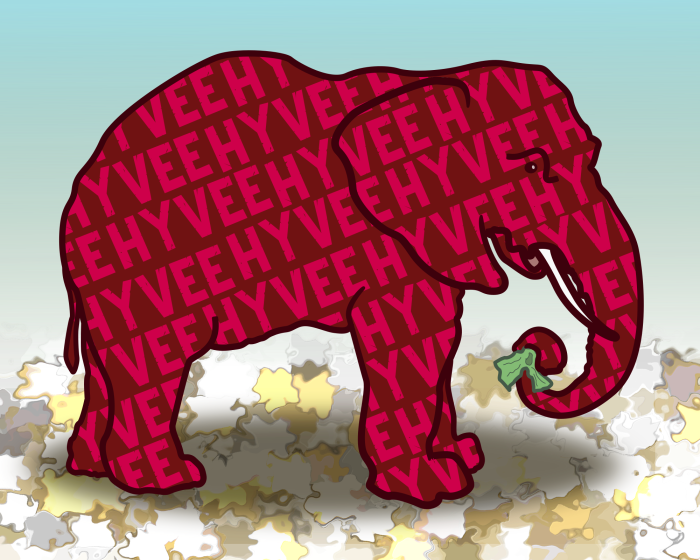 Editor's note: Hy-Vee's PAC provided a comment on June 24, which is enclosed in full at the end of this post.

Hy-Vee is one of those companies we often associate with small-town, everyone-knows-everyone "Iowa Nice" culture. Yet it's important to remember that while some major Iowa businesses started small, many are no longer those small-town startups of yesteryear. Hy-Vee is no exception, having just made a conveniently-timed donation that was its largest single political contribution in a decade.

Like many livestock farmers, state businesses fill their animal troughs with corn and silage, but the resulting pork is of the political persuasion variety. In this vein, I looked into the fundraiser1 for the Republican Party of Iowa (RPI), held at Hy-Vee's Ron Pearson Center in West Des Moines. President Donald Trump headlined the June 11 event.

Hosting a presidential event at the Ron Pearson Center is an intriguing choice. Other Des Moines metro area venues are arguably more civic-minded or symbolically patriotic, which could be leveraged for donations from patriotism-conscious conservatives: the Iowa Hall of Pride, the Iowa Historical Building, the Iowa State Fairgrounds, etc.

According to the June 2019 FEC report for the Hy-Vee Inc Employees' Action Committee, the company's PAC gave the Republican Party of Iowa $25,000 on May 7, three weeks before the public learned on May 30 that Trump would be returning to the state for the fundraiser. It was the PAC's only disbursement last month and its largest ever donation to the RPI. [Editor's note: According to Hy-Vee, the FEC records are inaccurate, and this disbursement was made on June 7, not May 7. See update below.]

An obvious question arises: "What was the purpose of that timely lump sum?" The likely possibilities are that Hy-Vee was courting a favor from and/or doing a favor for RPI. Such an event provides access to presidential-level movers-and-shakers, which supports the first option. On the other hand, Hy-Vee PAC's donation covered a significant portion of the fundraiser rental fee, which supports the second explanation.

Political donation data showed Hy-Vee has a penchant for Republicans, but like many corporations, has given to both major parties. Furthermore, while Hy-Vee's PAC donations have long skewed toward the right, they were relatively small for many years. 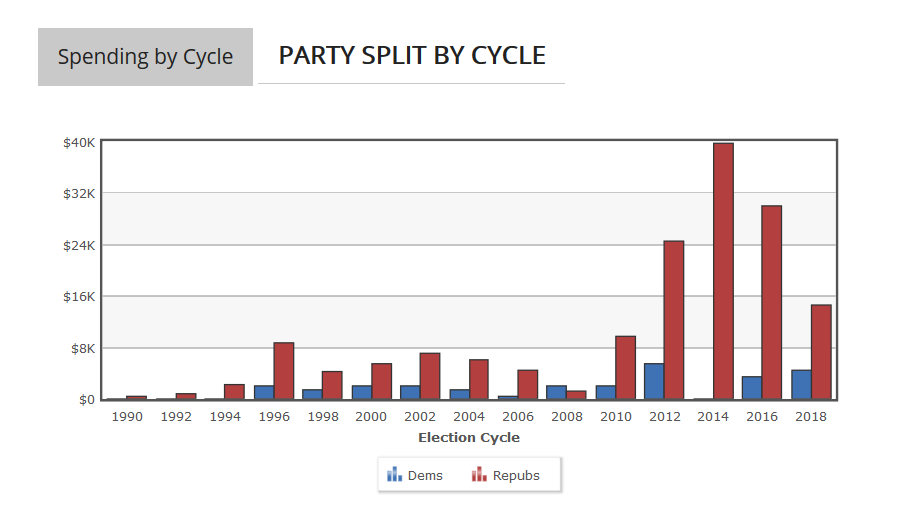 Hy-Vee's political giving changed dramatically over the past decade. The company's PAC donations tripled2 after the 2010 election cycle. Many Republican incumbents in Iowa will receive thousands of dollars from Hy-Vee, while some, like Governor Kim Reynolds and House Speaker Linda Upmeyer, receive five-figure amounts over an election cycle. 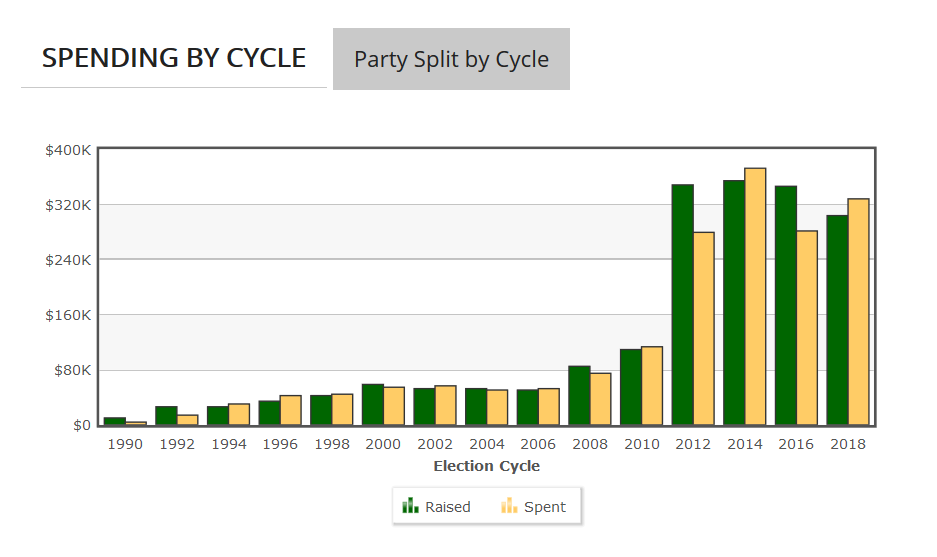 Hy-Vee has spent (on average) $300,000 every election cycle after 2010 through their PAC, according to the Center for Responsive Politics. That's a virtual drop in the bucket of their Forbes-estimated $10 billion revenue, but percentages can be deceiving.

This abrupt change in spending patterns coincided with a leadership change at the company. In 2009, Randall "Randy" Edeker replaced Ric Jurgens as Hy-Vee president, becoming CEO and board chair in 2012. Since Edeker's promotions to the highest company offices, the corporate goals have expanded, along with its political spending.

Hy-Vee's PAC has made sixteen contributions totaling $91,000 to the Republican Party of Iowa since 2010. The May 7 amount far eclipses the rest of Hy-Vee's giving to the RPI--an average donation of $5,668 and median donation of $3,750. 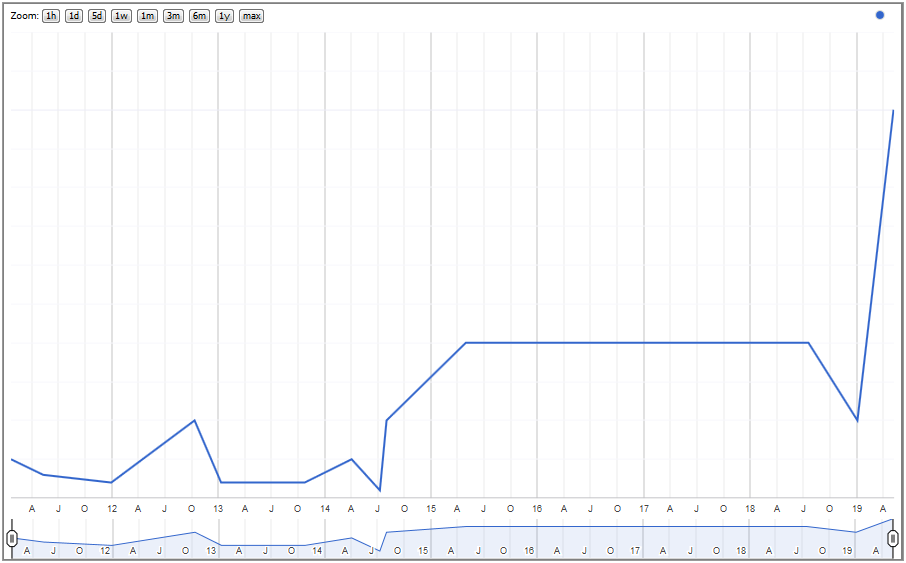 In fact, according to all currently-available FEC records, last month's contribution was not only the PAC's largest single donation in a decade, but also an outlier compared to how much Hy-Vee typically gives the Iowa GOP. The data also show a trend toward larger donations in recent years, unrelated to the Edeker spending bump.

Contact with Ron Pearson Center sales staff further demystified the May 7 amount. For an event utilizing the whole ballroom, an employee stated, a minimum $30,000 purchase of Hy-Vee's on-site catering was required. In other words, this oddly-timed donation covered 83 percent of the Iowa GOP's base venue rental cost.

RPI's June FEC report (covering the month of May) lists a combined $454.45 in payments to a Hy-Vee grocery store in Ankeny, marked as "Food and Beverage." The amounts, all under $100, suggest the food charges may be for lunches or catering to bring to some Republican meetings.

Typically, political parties put as much money as possible in their federal accounts, because those funds can be harder to raise. If this donation went into the RPI's federal bucket, the party will need to file an amendment to its June monthly FEC report.

But if GOP officials wanted to delay disclosure of Hy-Vee PAC's generosity, to avoid bad optics and awkward questions, they might have deposited the money into a state account. In that case, the $25,000 donation would not become public until RPI files its January 2020 report with the Iowa Ethics and Campaign Disclosure Board, covering fundraising and spending during the 2019 calendar year.

When asked for comment, Tina Potthoff, Hy-Vee's Vice President of Communications had this to say3:

"While I can't address your questions about the PAC, I do want to respond to your other questions about the [Ron Pearson Center]. This event was not sponsored by Hy-Vee. The Ron Pearson Center is a venue that can be rented out for public use and there are multiple groups who use it to host their various events. When an event is booked, a guest list is not required. We did not know the President would be attending this event when it was booked."

After a follow-up asking when RPI booked their event and if Potthoff could direct me to someone who could answer PAC questions, she replied3:

"I'm not sure when the reservation was made, but the PAC and the Ron Pearson Center are not connected in any way if that is what you are trying to imply."

The president is beside the point. Potthoff is technically correct: Hy-Vee, Inc. didn't give a $25,000 donation which appears to sponsor the event. Hy-Vee's PAC did, and Potthoff refused to answer any PAC-related questions. However, as VP of Communications, she could easily have ascertained the date and time of RPI's booking. She declined to do so.

Since Potthoff couldn't or wouldn't answer questions regarding the PAC, I needed to find someone directly connected, such as one of the PAC officers. The committee's latest Iowa Ethics and Campaign Disclosure Board filing lists Noreen Otto as chairperson. The PAC's October 2018 report named Mary Elizabeth Hart as chair. However, for the majority of the time over the past few years, Otto chaired the PAC.

Emailing Otto resulted in this message.

The most logical point of contact of the PAC turned her publicly-listed email contact into a black hole for messages. Not unexpected of PACs, which often stonewall efforts to reveal their machinations.

The Iowa GOP did not respond to my repeated attempts to seek comment via email or through their media contact form. RPI’s communications director blocked me on Twitter for merely following him, before I was able to ask any questions.

State party chair Jeff Kaufmann should clarify whether omitting Hy-Vee PAC's large gift on the latest FEC filing was a clerical error or an attempt to conceal the donation's convenient timing.

Regarding leadership of Hy-Vee's PAC, John Ortner is listed as treasurer on current FEC documents, despite the fact that state filings now identify Joseph Keller as treasurer. Since Keller has submitted the PAC's FEC documentation since the May 2016 report, one would hope the PAC has informed the federal agency of its current treasurer.

UPDATE from Laura Belin: Mary Beth Hart, the executive director for Hy-Vee's PAC, provided this comment to Bleeding Heartland on June 24. Hy-Vee also posted it publicly on their website.

On June 11, 2019, the Republican Party of Iowa (RPI) hosted a fundraising event featuring President Trump at the Ron Pearson Center. Since that time, several customers and others have inquired about a donation made by Hy-Vee's Political Action Committee (PAC) before that event. Hy-Vee, as a company, does not make financial contributions to political parties, groups or candidates. The PAC, which is funded voluntarily by individual employee contributions and directed by employee members, does. PAC decisions are issue based, not party based. The PAC makes contributions to candidates and leadership committees from both major parties. Neither the PAC nor the company lobbies on behalf of or endorses political candidates or parties.

Recently, the Hy-Vee PAC Board voted to give $25,000 to the Republican Party of Iowa to be a part of a private event. The PAC saw this as an important opportunity for our CEO to directly provide information about pharmacy-related issues impacting countless senior citizens and thousands of pharmacies across the country, including the Midwest, to the President and his staff while they were in town. Prescription costs in Iowa and across the nation have continued to climb. The average price per prescription in 2011 was $77.30, a number which has increased to $101.75 in 2018. In addition, since 2011, 170 Iowa pharmacies have closed. Iowa already has a shortage of health care professionals, and a declining number of pharmacies only worsens that problem. All of these issues have a significant impact on our customers, which is why this is a key initiative for us at the national level. (To learn more about the issue via a news release Hy-Vee issued on May 23, click here: https://www.hy-vee.com/corporate/news-events/news-press-releases/hyvee-advocates-for-immediate-reform-of-pharmacy-dir-fees-that-raise-drug-costs-for-senior-citizens/.)

The $25,000 check our PAC provided to the Republican Party of Iowa was noted as having been cut on May 7. This is incorrect and could understandably cause some confusion. Per our procedures, the Hy-Vee PAC Board voted on June 6 to participate in the event; the check was cut on June 7. (We are looking into whether the issue needs to be corrected with the FEC.) No one at Hy-Vee knew this event was taking place on May 7, including those working at the Ron Pearson Center or our PAC.

The company and the PAC remain bipartisan and continue to work with all political parties. Hy-Vee’s executives have been invited to Washington by Administrations of both parties. When President Obama was in office, Hy-Vee leaders went to Capitol Hill to discuss various health-related issues, and in 2012, Hy-Vee teamed up with and hosted First Lady Michelle Obama for a health and wellness day for more than 10,000 kids in Des Moines.

Despite today’s highly contentious political environment, we will continue to voice our concerns about policy issues that impact our customers. Thank you.

Bleeding Heartland is seeking answers to follow-up questions, including: