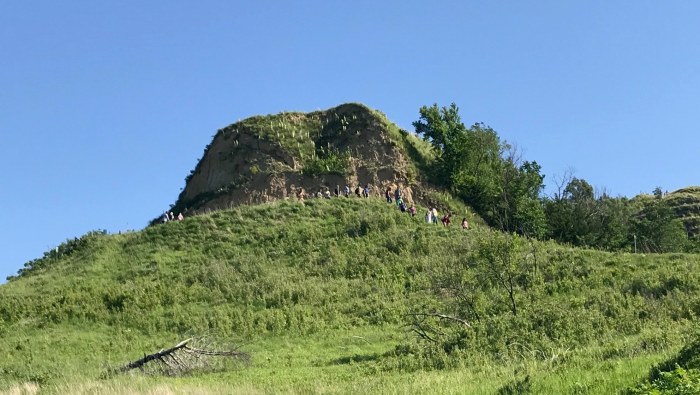 Brent’s Trail: Envisioning a state trail through the Loess Hills of western Iowa

Patrick Swanson describes a project to highlight "the unusual geology and scenic value of the Loess Hills, their importance as a wildlife corridor and a home to the largest tracts of native remnant prairie left in the state, and the presence of many protected areas along the backbone of the hills." -promoted by Laura Belin

The idea of a long-distance trail through the Loess Hills was envisioned by Brent Olson, whose career as area forester for the Loess Hills State Forest spanned 25 years before his untimely death in 2016 from cancer at age 53. His vision was championed by those who followed to create such a trail and name it in his honor.

About 150 people turned out for the June 8 dedication on what was a very pleasant morning. The event garnered some coverage from local media, and additional pictures of the event have been posted by the Friends of The Loess Hills State Forest And Preparation Canyon State Park Facebook Group.

I met Brent once, just briefly. In 2013, he assisted a group of folks who came together in February to complete a prescribed burn on a Loess Hills prairie remnant I am working to restore. I came up to survey the results after work, and he happened to be driving by and introduced himself. He mentioned that he was keeping an eye on the place in case there were any flare-ups (there was a fair amount of downed timber at that time). I appreciated his willingness to work with others and help a landowner get some management done to improve wildlife habitat. Attending the Brent’s Trail dedication helped me honor his contributions to conservation.

As current State Forester Jeff Seago and Harrison County Conservation Board Director Scott Nelson both mentioned in their opening remarks at the dedication, the completion of this trail section involved a great deal of collaboration between state and county agencies, other partners and supporters, and private landowners. Such a level of cooperation is a welcome counterpoint to the factionalism we see elsewhere in our society these days, and serves as an excellent example for how to develop outdoor recreational opportunities in the state.

The hike is a rugged trek over classic Loess Hills topography. Interested readers can find the trail map here. The trail starts with the ascent and descent of Murray Hill, followed immediately by another ridgetop climb and a drop back into the valley ending near a pioneer cemetery. 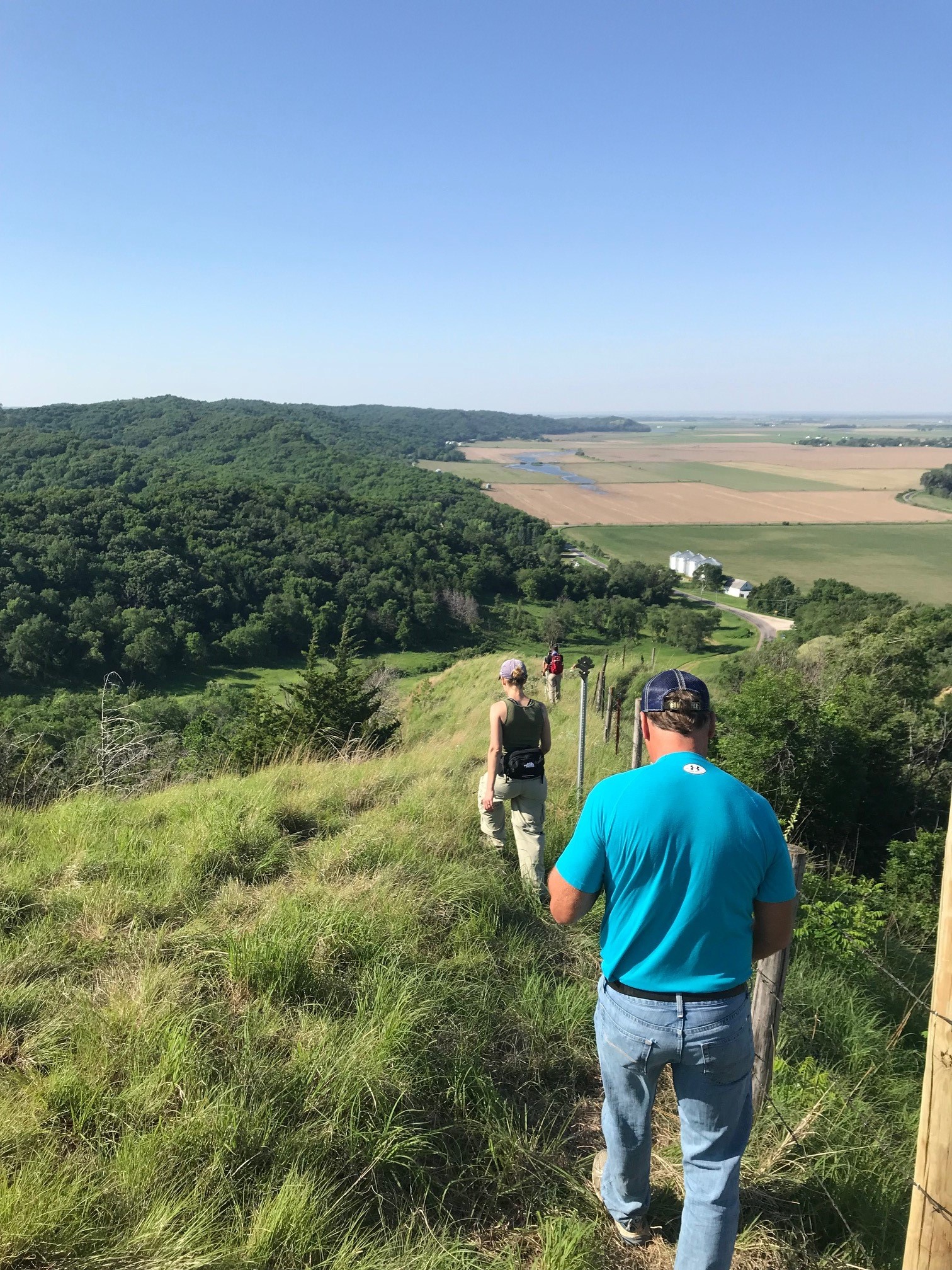 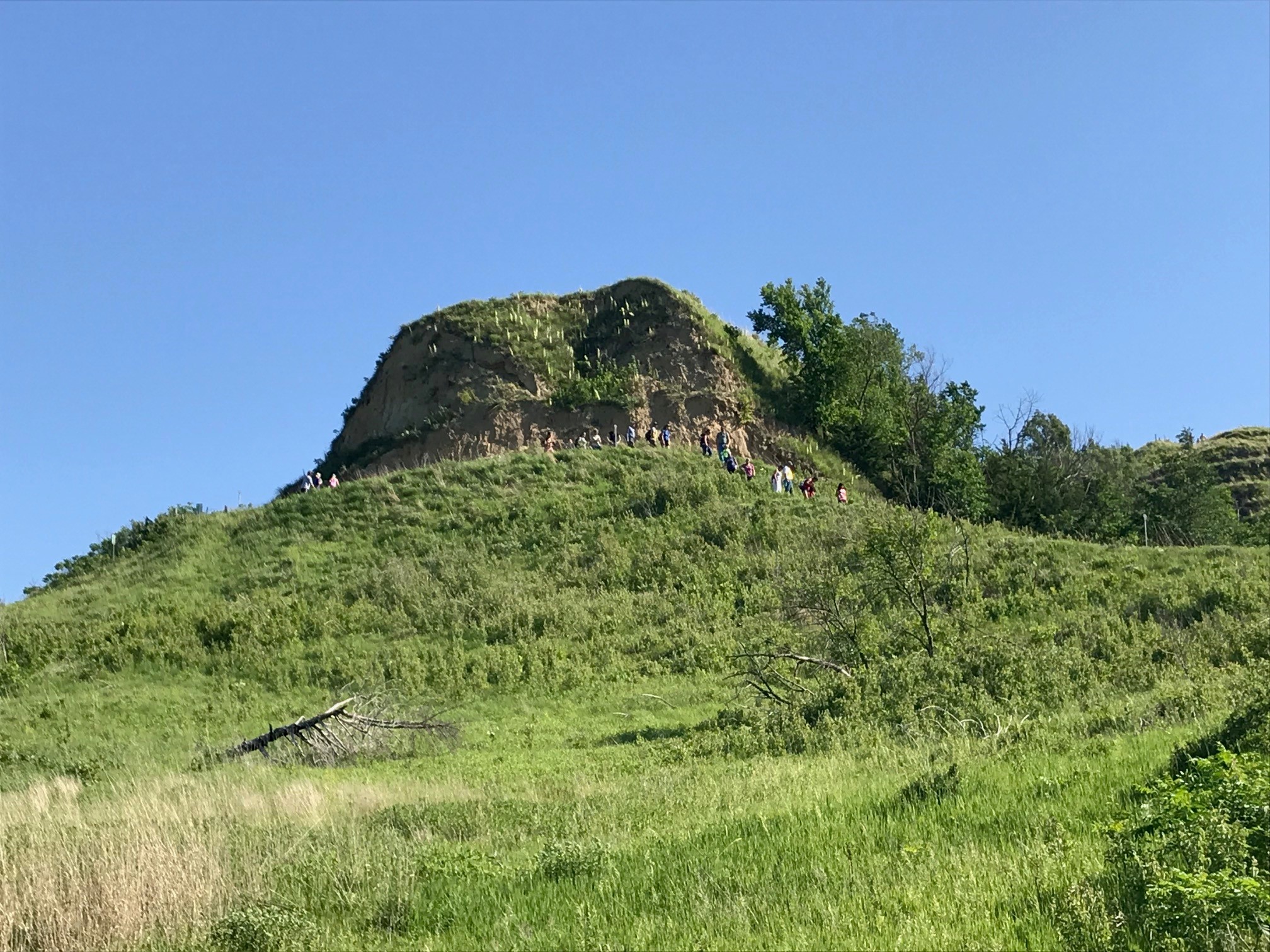 With the peonies in full bloom, the cemetery was a lovely and peaceful setting. 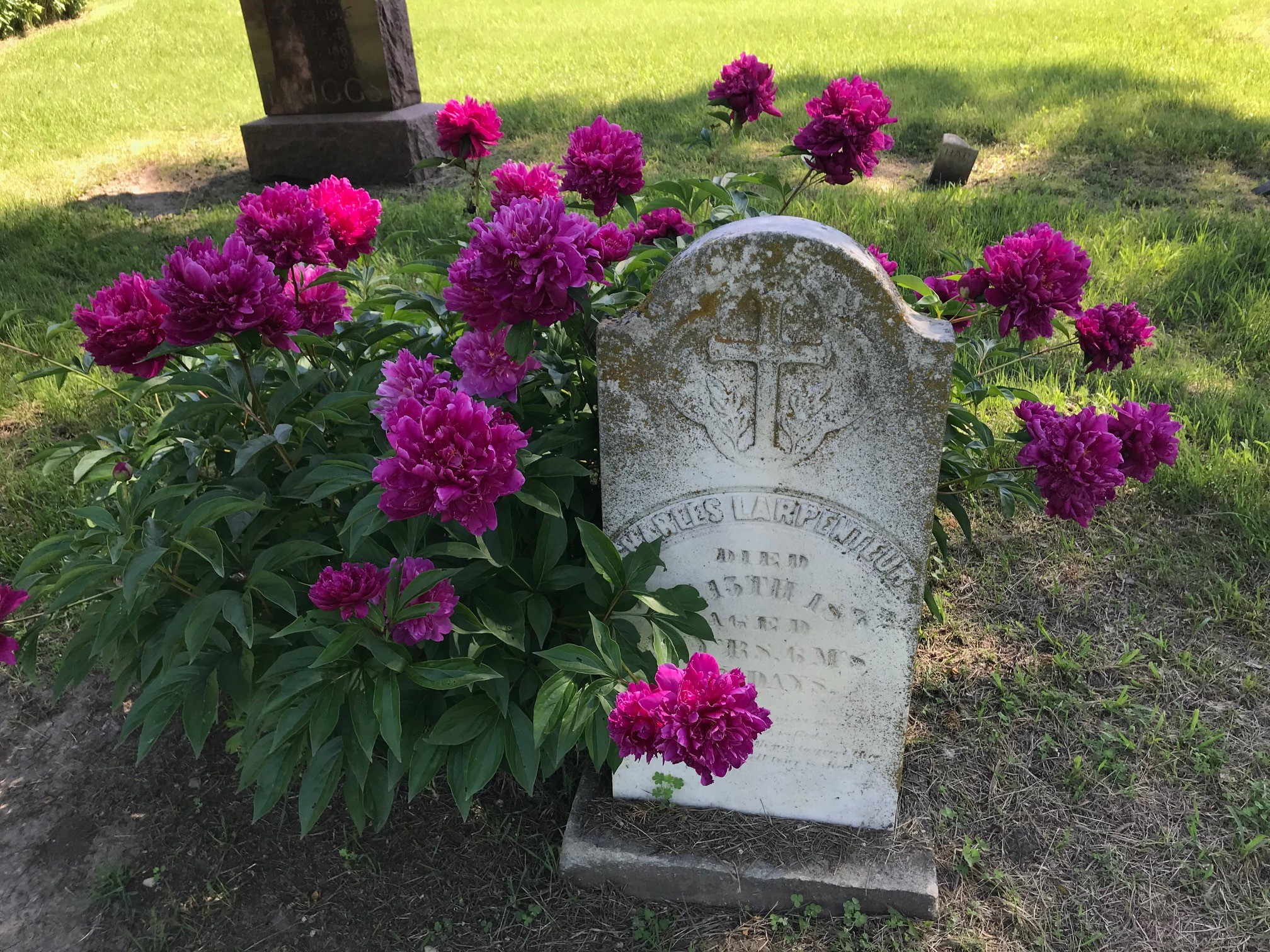 At just over a mile in length, this part of the trail has some wonderful scenic vistas and native prairie remnants (the yuccas and prairie larkspurs were particularly showy that day), but seems much longer than it is due to the elevation changes. Many who started the hike ended their journey after the first or second descent. I confess to counting myself among this group.

A close view of prairie larkspur: 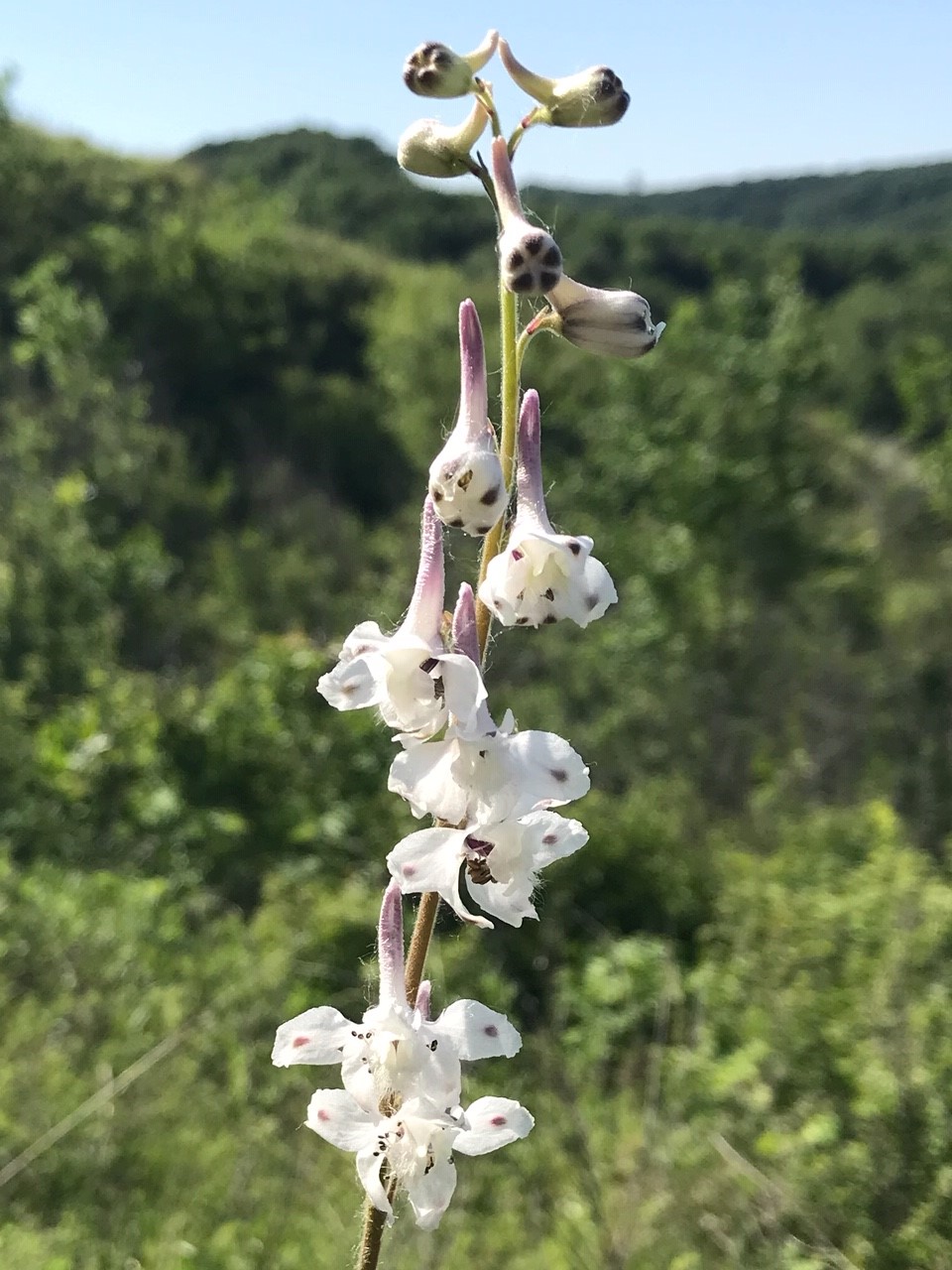 Yucca plants growing on a hillside: 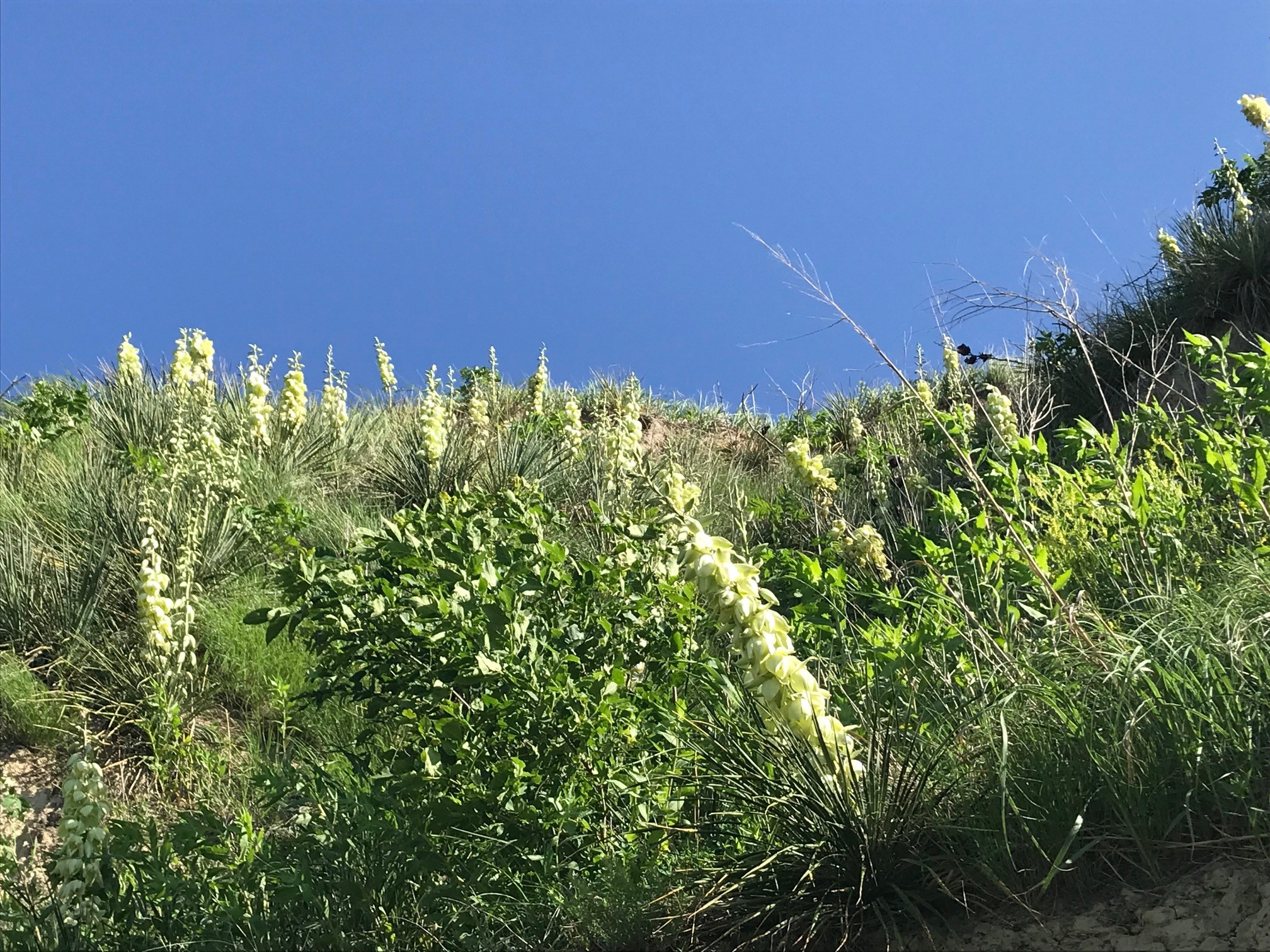 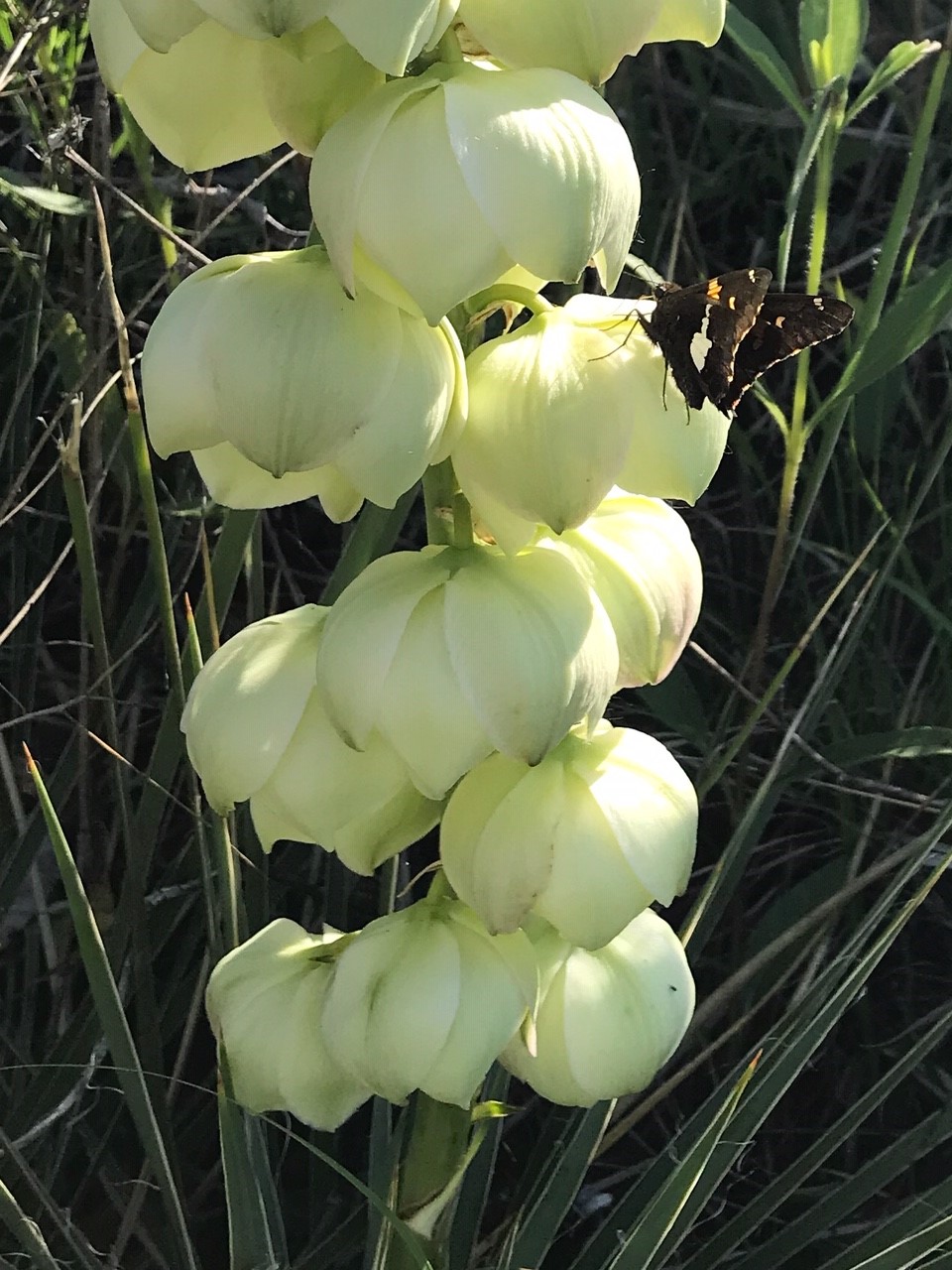 [Editor's note from Laura Belin: Eileen Miller wrote a wonderful Bleeding Heartland post about yucca and the yucca moth in 2016.]

The sight of the hiking group snaking down the trail brought forth in my mind an image of a migration of sorts, and caused me to reflect a bit on other migrants that travel through the Loess Hills and the flora and fauna that call this place home.

The Loess Hills are well known as a migration corridor along the eastern edge of the Central Flyway. Monarch butterflies and many species of birds follow this landform along the Missouri River in western Iowa during their annual treks north and south (see maps here and here, for example). Important Bird Areas identified by the Audubon Society bookend the Loess Hills, from Waubonsie State Park in the south, through Hitchcock Nature Center and the Loess Hill State Forest in the midsection of the hills, to the Nature Conservancy’s Broken Kettle Grasslands in the north.

To imagine a hiking trail linking these and other pearls of protected natural areas along the entire backbone of the Loess Hills stirs a sense of possibility for an Iowa that is just a little wilder. Seeing it to fruition would put Iowa in league with states that host other great American trails, like the Appalachian Trail and the Pacific Crest Trail.

Brent’s Trail could be part of something much bigger – what I am provisionally calling the Iowa Loess Hills State Trail and Wildlife Corridor, connecting key Special Landscape Areas from Fremont to Plymouth counties. This trail would nicely complement the existing Loess Hills Scenic Byway driving route, and indeed would enhance it by offering travelers more options to get off the roads and into the hills. 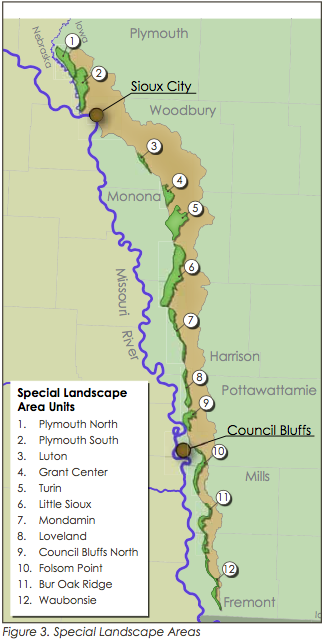 The trail could highlight the biodiversity of the Loess Hills and the distinctive plants and animals unique to this area in the state, such as yucca and biscuitroot. Establishing a wildlife corridor through the Loess Hills would also help the local plants and animals maintain genetic flow and adapt to climate change. Given the serious loss of biodiversity we are facing, these efforts would represent a tangible local- and state-level response to sustain viable populations of native species in this region.

Some might balk at the idea of creating this trail, thinking that it would require dramatic expansion of public lands. While public acquisition of some areas might be warranted to protect high quality native remnants, and provide trailhead access and amenities for different trail users, this needn’t be the case overall.

For example, landowners could sell (or donate) an easement granting a trail right-of-way while still retaining private ownership of the property. Landowners could also take advantage of existing incentive programs to improve habitat on private property adjacent to the trail, through mechanisms such as the Iowa Habitat and Access Program and the Conservation Reserve Program. Other organizations could support similar initiatives by private landowners as well.

Sustainable agricultural production and practices, such as permaculture, increasing farm diversity, buffer strips, and organic and soil building farming techniques, could (and should) be encouraged along the trail to take advantage of growing interest in agritourism.

Replacing traditional row crops with reconstructed grassland habitat along the trail would improve the scenic nature of the trail and the connectivity of the wildlife corridor, but would have a variety of secondary benefits as well, such as reducing soil erosion, improving storm water retention, providing pollinator-friendly areas, increasing carbon sequestration, and enhancing hunting opportunities.

These ventures always elicit the question of how to pay for it. One obvious solution is obtaining support from the Iowa Natural Resources and Outdoors Trust Fund, which Iowa voters approved but has yet to be funded by the legislature.

Another possibility would be to establish a dedicated funding stream for this project. How about an Iowa Loess Hills State Trail and Wildlife Corridor Stamp, similar in concept to the federal duck stamp, that would provide funding for trail development and management (and perhaps ultimately access to all the trails)? Like the duck stamp, art competitions could be held to produce the trail stamp, which could further showcase the scenic nature of the trail. These ideas are by no means exhaustive, but are merely conversation starters for stakeholder groups to tackle.

Considering the unusual geology and scenic value of the Loess Hills, their importance as a wildlife corridor and a home to the largest tracts of native remnant prairie left in the state, and the presence of many protected areas along the backbone of the hills, it seems fitting and timely to embark on a real effort to connect these places by a state trail. As Brent envisioned, such a project would benefit all current and future inhabitants and visitors to this unique Iowa landscape.