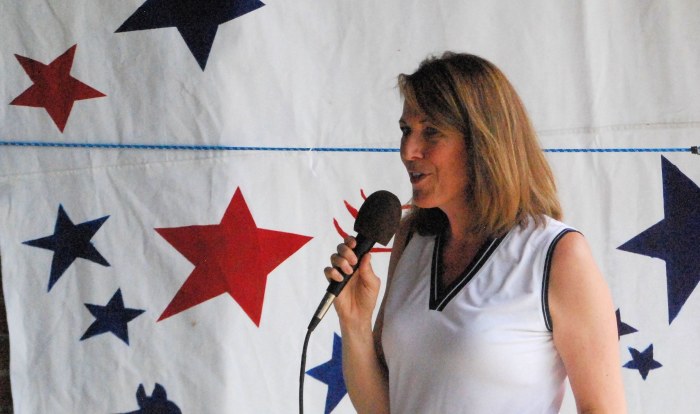 Interview: Why Cindy Axne's not for impeachment hearings (yet)

Months have passed since Special Counsel Robert Mueller released hundreds of pages of findings from a two-year investigation. About 1,000 former federal prosecutors signed a statement saying "the conduct of President Trump described in Special Counsel Robert Mueller’s report would, in the case of any other person not covered by the Office of Legal Counsel policy against indicting a sitting President, result in multiple felony charges for obstruction of justice."

Various Trump administration officials have flouted Congressional subpoenas to produce documents or testify. President Richard Nixon's failure to comply with the House Judiciary Committee's subpoenas in 1974 were the basis for one of the three articles of impeachment against him.

Yet only about 80 of the 235 U.S. House Democrats are now on record supporting formal impeachment hearings.

None of Iowa's three Democrats in Congress are among them.

In early June, Bleeding Heartland sought comment from Representatives Abby Finkenauer (IA-01), Dave Loebsack (IA-02), and Cindy Axne (IA-03) about their stance and thought process on this issue. Opening hearings would not lock the House into a vote for articles of impeachment. Members could decide after further investigation to vote for censure, or do nothing.

Staff for Finkenauer and Loebsack did not respond to my inquiry, but a communications director promptly provided this statement from Axne, which dated to a recent news conference by Mueller.

“As Special Counsel Mueller made clear today [May 29], there were multiple, systematic efforts by a foreign power to interfere in our election -- that is an attack on all Americans. The Constitution gives Congress the responsibility to provide oversight over the Executive Branch, and I believe we have a duty to continue looking into the findings of the Special Counsel’s report and uphold the rule of law. We need to make sure this never happens again by passing legislation to protect our democracy and strengthen our election security.”

Axne touched on current threats to the democratic process during her speech at the West Des Moines Democrats picnic on July 3 (full audio).

My transcript of the relevant portion, beginning around the 1:00 mark:

You know, we are out here today because we are celebrating Independence Day. And we always need to make sure that we take a step back and recognize what that day really means. This is a day to celebrate our democracy. To celebrate what our founding fathers so accurately predicted: that we needed three branches of government, that we needed a strong military, that we needed a president that cares about our country, and that we needed folks like you who held government accountable to doing what's right.

Those structures that they put in place are in peril right now out in Washington. And I couldn't be more honored to be standing up, in DC, making sure that we protect this country, and make sure that every single person, not just in Iowa, but across this country, has opportunities for years to come.

Axne stayed after the speaking program to mingle with Democratic activists. Before heading to the West Des Moines Independence Day parade, she agreed to answer a few follow-up questions (audio).

Last time I checked, Axne wasn't on the list of House Democrats who are for launching impeachment hearings. Is she still not inclined to support that step?

Well, right now I'm doing what our constitutional authority has laid out, and what Mueller's report has specifically outlined as the areas that we should look at. So that's what we're following through on.

So for instance, I'm on the Financial Services Committee. We requested his [Trump's] financial documents from Deutsche Bank. Those were coming, there's now been an appeal, but we're still in the process of making that happen.

I want to make sure that we protect this country from any foreign interference, or obviously from any activity that the president created that could put our country in harm's way, because nobody's above the law. But we've got to do what we need to do, which is our due diligence in getting the investigations done to make sure we can move forward in the right direction.

Some legal scholars say that if the House held impeachment hearings, it would strengthen the legal case for forcing White House officials to comply with subpoenas they are now flouting.

And we have, we know that there are next steps to take. If this--if we continue to see anybody that we need to be speaking with limiting our powers, we know that there--we can, we can go as far as obviously, holding people in contempt. We can jail them. These are things that are under our authority. And so we're going to exercise everything under our authority to move forward in the right direction.

We've got to get to the bottom of this. We need to make sure that our country's safe. But we also need to do so in a way that is above the law [sic], to make sure that whatever we find has solid evidence behind it.

What would need to happen for Axne to get on board with opening impeachment hearings, understanding that holding the hearings doesn't tie her to voting out articles of impeachment or a censure motion?

I don't have an exact answer for that at this time. I mean, I think it's important that we take a look at what we're already doing right now, and making sure that we push that agenda forward. And if we're, if we're a couple of weeks, three-four weeks out, and we're still not getting anywhere, then we'll have to look at different options, and that could be one of them.

But we have to just exercise what's the right way to do this. The legal way to do this. And then if we can't get where we need to go with those legal parameters, then we may have to look at that process.

So Axne wouldn't rule out supporting impeachment hearings down the road?

Well I wouldn't rule anything out. Absolutely not. You know--but we, what we want to try and do is the way that's going to be in the best interest of the American people. I mean, I know that's what the [House] Speaker [Nancy Pelosi] is trying to do. It hasn't been easy, and quite honestly, we are being put up against the wall. And there is a limit to that. And that's where we'll have to peel off and see what needs to be done next.

Bleeding Heartland will continue to seek comment from Finkenauer and Loebsack on why they haven't called for impeachment hearings, and whether they may be open to taking that step in the coming months.