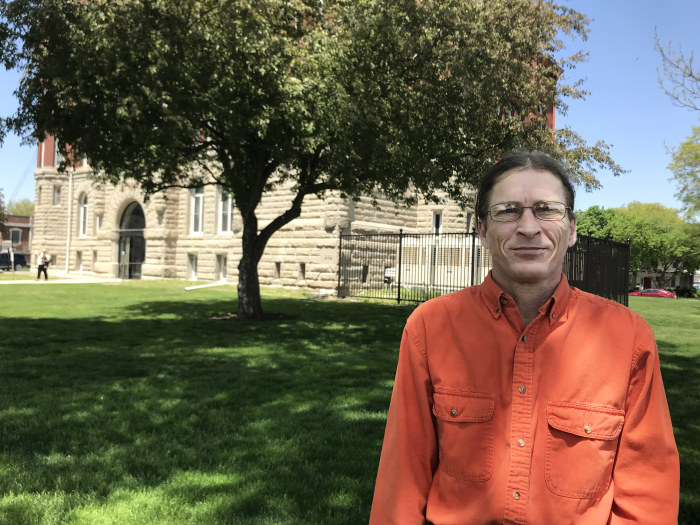 Memo to law enforcement officers: Swearing at you is not a crime

The Adams County Sheriff’s office must stop charging critics with crimes, under a U.S. District Court injunction issued this week. The injunction is part of an agreement to settle a federal lawsuit filed on behalf of Red Oak resident Jon Goldsmith, the ACLU of Iowa announced on July 8. Goldsmith faced a third-degree harassment charge last year after putting up a profanity-laden Facebook post about a sheriff’s deputy.

The sheriff’s office will pay Goldsmith $10,000 in damages, cover the ACLU’s attorney’s fees, and “provide its officers training approved by the ACLU on free speech rights,” while adopting an ACLU-approved social media policy.

In a news release enclosed below, Goldsmith expressed hope that the training will stop the Adams County Sheriff’s office “from doing this to other people. It’s ridiculous that I had to get a lawyer to defend my right to free speech. People need to be able to speak up when an officer is doing wrong.”

His court filing cited two similar instances: one person was arrested for disorderly conduct last year after cursing at a sheriff’s deputy, and another was arrested in March “for abusive epitaphs [sic] and threatening gestures” after saying “fuck you” and raising a middle finger at sheriff’s deputies.

Law enforcement officers have a difficult and stressful job, and anyone could feel upset after being cursed at in a public forum. But as ACLU of Iowa Legal Director Rita Bettis Austen commented,

people have a constitutional free speech right to criticize their government. Police are not allowed to charge people with crimes because they annoy the police or say things the police disagree with—on social media like Facebook, or otherwise. There is no exception because someone expresses anger in inartful ways, causes offense, or uses curse words.

Cooperating attorney Glen Downey likened this case to “brushfire,” because such infringements on free speech “pop up again and again and need constant addressing, and if they are left unchecked they’d have a devastating effect.”

Here’s hoping police departments and sheriff’s offices around Iowa learn from this unfortunate case and train their own staff not to infringe on anyone’s free speech following contentious face to face encounters or harshly-worded social media posts.

Red Oak, Iowa — The Adams County Sheriff’s office has agreed to pay Jon Goldsmith of Red Oak $10,000 in damages after charging him for harassment when he posted a criticism of a sheriff’s deputy on his own Facebook page.

Goldsmith was required to hire a defense lawyer to defend himself against the charges and even had to seek medical treatment for high blood pressure related to the distress he experienced as a result of the charges.

The court also issued a permanent injunction that orders the Adams County Sheriff’s Office to stop criminally charging people who criticize its law enforcement officers. (The lawsuit details two other incidents of deputies arresting people for exercising free speech.) This court order was agreed to by the sheriff’s office as part of the settlement agreement.

Last summer, Jon was charged with simple misdemeanor harassment when he wrote an angry post on his Facebook page after witnessing actions by an Adam’s County Sheriff’s deputy at a local festival that disturbed and upset him.

ACLU of Iowa Legal Director Rita Bettis Austen said “As the Court’s injunction today confirms, people have a constitutional free speech right to criticize their government. Police are not allowed to charge people with crimes because they annoy the police or say things the police disagree with—on social media like Facebook, or otherwise. There is no exception because someone expresses anger in inartful ways, causes offense, or uses curse words.”

The lawsuit was filed in U.S. District Court for the Southern District of Iowa, You can view the complaint here:
https://www.aclu-ia.org/sites/default/files/stamped_goldsmith_complaint.pdf

You can view the the stipulated injunction here:
https://www.aclu-ia.org/sites/default/files/goldsmith_injunction.pdf

Jon said he’s glad that a settlement has been reached. “I’m especially glad the department will get free speech training,” he said. “I hope it stops them from doing this to other people. It’s ridiculous that I had to get a lawyer to defend my right to free speech. People need to be able to speak up when an officer is doing wrong. The sheriff’s office shouldn’t be able to shut them down just for doing that.”

The ACLU of Iowa’s cooperating attorney in the case is Glen Downey, of The Law Offices of Glen S. Downey, LLC, in Des Moines. Downey has worked with the ACLU of Iowa on a host of important free speech cases.

Glen Downey said, “Jon’s case one of those ‘brushfire cases’ because like a brushfire, they pop up again and again and need constant addressing, and if they are left unchecked they’d have a devastating effect. Such violations unfortunately routinely happen. If these unconstitutional violations are left unchecked, the would profoundly affect the ability of all citizens to believe in the fairness and decency of their own democracy.”

Jon had attended a festival in Corning, the county seat of Adams County, which is next to Montgomery County, where Jon lives. Jon observed Adams County Sheriff’s Deputy Cory Dorsey stopping a motorist for a brake light and conducting a drug dog search of the man’s car. No drugs were found, and Jon felt the man was mistreated. Later at the festival, Jon observed Dorsey “body slam” someone else, who he knew, for no reason Jon could observe. Later, when Jon saw a mugshot of the body-slammed man on the Adams County Sheriff’s Facebook page, he felt compelled to speak up against what he viewed as improper and abusive police conduct. Jon’s post criticizing the actions of Deputy Dorsey expressed anger and employed curse words. The post didn’t threaten or advocate any violent or illegal activity.

Shortly thereafter, the Adams County Sheriff’s office charged Jon with third-degree harassment, which carries with it imprisonment of up to 30 days in jail and a maximum fine of $625.

The Adams County Sheriff’s Office charged that Jon had posted something “threatening” because he called Dorsey “a fucking pile of shit” and a “stupid sum bitch” and because of his comment that “when you get shit canned I’ll hire you to walk my dog and pick up his shit.”

In addition, Jon’s post had criticized Deputy Dorsey for using excessive force in body slamming a festival attendant, and in engaging in an unconstitutional stop and search using a drug dog.

Jon ended up having to hire a lawyer to defend himself against the charges. His lawyer contacted the ACLU of Iowa, which assisted in getting the criminal charges dropped. He also experienced serious distress from the charges, requiring medical treatment by his doctor for high blood pressure.

Appendix 3: Complaint filed by Jon Goldsmith in U.S. District Court on May 21:

Top image: Jon Goldsmith in front of the Montgomery County courthouse. Photo provided by the ACLU of Iowa and published with permission.