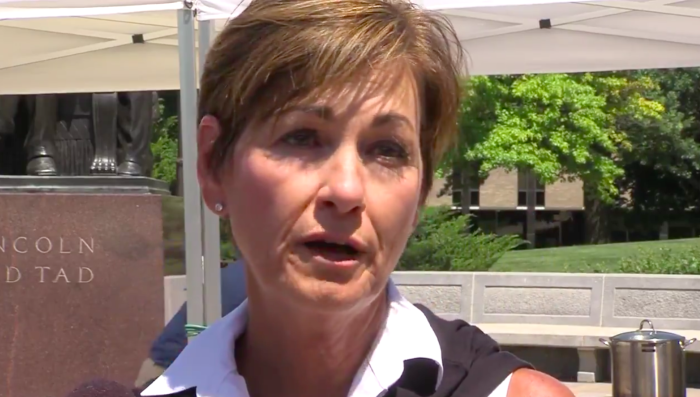 Governor Terry Branstad and then Lieutenant Governor Kim Reynolds promised endlessly that privatizing Medicaid would make the system more “sustainable.” The talking point became a crutch for Governor Reynolds whenever she faced questions about problems privatization has created for patients, caregivers, and health care providers.

The latest reality check arrived on July 10. For the second year in a row, for-profit companies that manage care for hundreds of thousands of Iowans on Medicaid will receive more than an 8 percent increase in government payments.

The Iowa Department of Human Services posted language from the new contracts with Amerigroup Iowa and Iowa Total Care, covering the fiscal year that began on July 1. In a news release, DHS tried to lowball the numbers: “Under the new contracts, Iowa will be increasing Medicaid funding by 6.5%.”

The Des Moines Register story by Tony Leys and Stephen Gruber-Miller gave a fuller picture. Amerigroup and Iowa Total Care (which is new to the state’s Medicaid program) will receive $386 million more during fiscal year 2020 than Amerigroup and UnitedHealthcare received in the fiscal year that ended on June 30. That’s an 8.6 percent increase. Iowa’s share in the additional payments will be $115 million, up 6.5 percent compared to last year.

The new terms come a year after DHS officials agreed to give Amerigroup and UnitedHealthcare, then the state’s Medicaid managers, a raise of 8.4% in state and federal money for fiscal year 2019. That year’s raise amounted to $344 million, including $103 million more in state money. As a result, legislators had to come up with more money last spring, in the middle of the budget year. […]

Medicaid Director Mike Randol told an advisory board Wednesday that the new contract numbers reflect outside experts’ estimates of what the insurers are actually spending on care for Iowans.

“I don’t like to characterize that as a raise,” Randol told the Iowa Council on Human Services, a council that advises DHS. He said legislators will be asked to appropriate money to cover the state’s share.

Reynolds kept up the happy talk in her remarks to reporters on July 10. From a clip published by ABC News 5’s Sarah Beckman,

We’ve made progress. […] We’ve started to stabilize the program. We now have three years of data, so we know what the program costs. We’re not projecting or guessing. We have actual data that we can base this off of.

The governor said state officials listened to concerns expressed by providers and state legislators, so negotiated contracts include higher fees for providers, better access for mental health, and more “accountability” for the MCOs. “It’s a little bit higher than it was last year, but not a lot,” she said. She also asserted, “The state’s portion — it has gone down about one percent,” according to Radio Iowa’s Dar Danielson. “It’s one percent less that’s coming out of the general fund. We’ve started to bend the cost curve.”

I think Reynolds was alluding to the fact that state payments to the companies will increase by 6.5 percent this year, compared to a 7.5 percent increase in the state’s portion for fiscal year 2019. It would be misleading to imply the state’s costs are going down.

Key Democratic lawmakers pointed out that Medicaid costs continue to increase at a faster rate than under the old fee-for-service system. State Representative Chris Hall, the ranking Democrat on the House Appropriations Committee, said in a written statement,

The public and taxpayers have watched for years now, as privatized Medicaid has failed our state. This is the latest sign that costs are rising faster and costing taxpayers more under privatization than under state control. At the same time, the Reynolds administration refuses to explain DHS leadership changes at a critical moment of negotiations. Iowans deserve access to affordable health care and Medicaid privatization is heading the opposite direction.

“Governor Reynolds has once again agreed to give the MCOs the largest dollar increases for Medicaid in the last decade. The publicly managed Medicaid system grew at an average of 5% each year over a 10-year period before privatization. Last year, the increase was 8.4%. The increase announced today is a whopping 8.6%!

“Just imagine how much better off Iowans would be if K12 public schools, job training programs and family planning services received that kind of increased state support!

“The big cheerleaders for privatized Medicaid – Governor Reynolds and Republican legislators –cannot back up their claims that privatizing would save money and make people healthier. That’s because it hasn’t happened.

The latest developments were entirely predictable. Before the Branstad administration privatized the system, critics warned that the private companies would demand hundreds of millions more dollars, as had happened in Florida.

The state of Connecticut “saved money and improved care” by returning to a state-run Medicaid system in 2012. Kaiser Health News reported at the time,

State officials say the firms, including Hartford-based Aetna, did not fulfill their promise of lower costs and better care.

“Connecticut has a 15-year history with managed care organizations and there has been a diminishing confidence in the value of what they are providing,” said Mark Schaefer, the state’s Medicaid director. “Their measured performance is not impressive.”

Let’s hope Iowa won’t wait fifteen years to reverse course. But as long as Reynolds is incapable of admitting the program isn’t working, Iowans will continue to throw more good money after bad.