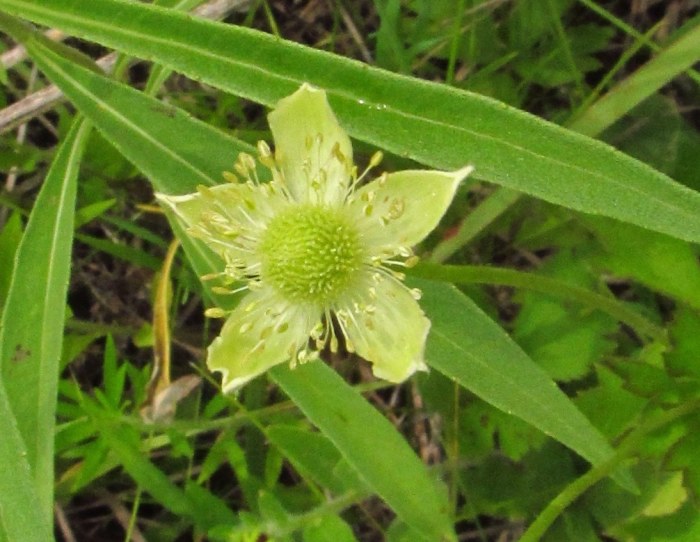 Distinctive features of blossoms inspired the common names of many native plants, but Thimbleweed (Anemone cylindrica) is so named because of its seed pod.

This species is native to most of the U.S. north of the Mason-Dixon line and much of Canada. Ecological consultant Leland Searles told me he calls this plant "windflower" to distinguish it from Anemone virginiana, also commonly known as Thimbleweed (or Tall anemone or Tall thimbleweed).

Other common names for Anemone cylindrica include Candle anemone, Long-headed thimbleweed, and Longhead thimbleweed. According to the Minnesota Wildflowers site,

It can be distinguished from other anemones by the cylindrical seedheads, which are at least twice as long as they are across. Unlike Anemone canadensis (Canada Anemone), Thimbleweed's leaves have petioles, whereas the leaves of the former are sessile. Thimbleweed's leaves differ from Anemone virginiana (Tall Anemone) by having less dentation along the margins, and some of its leaves are palmate.

I would have overlooked the windflowers near the woodland edge of Mike Delaney's Dallas County land if he hadn't pointed them out on a visit in late June. You can see the wedge-shaped, lobed leaves in this shot. 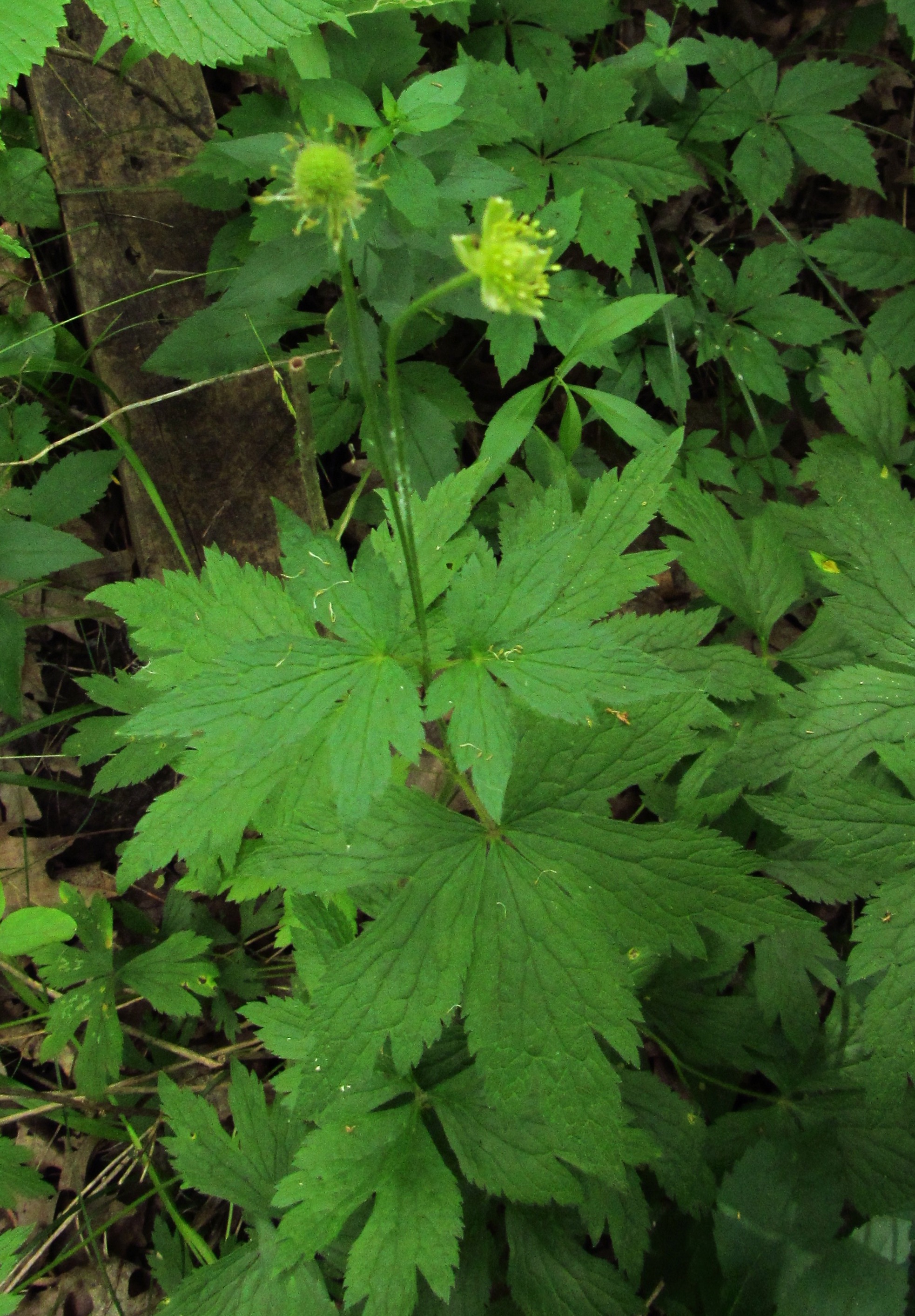 Several buds had yet to open on windflower plants. 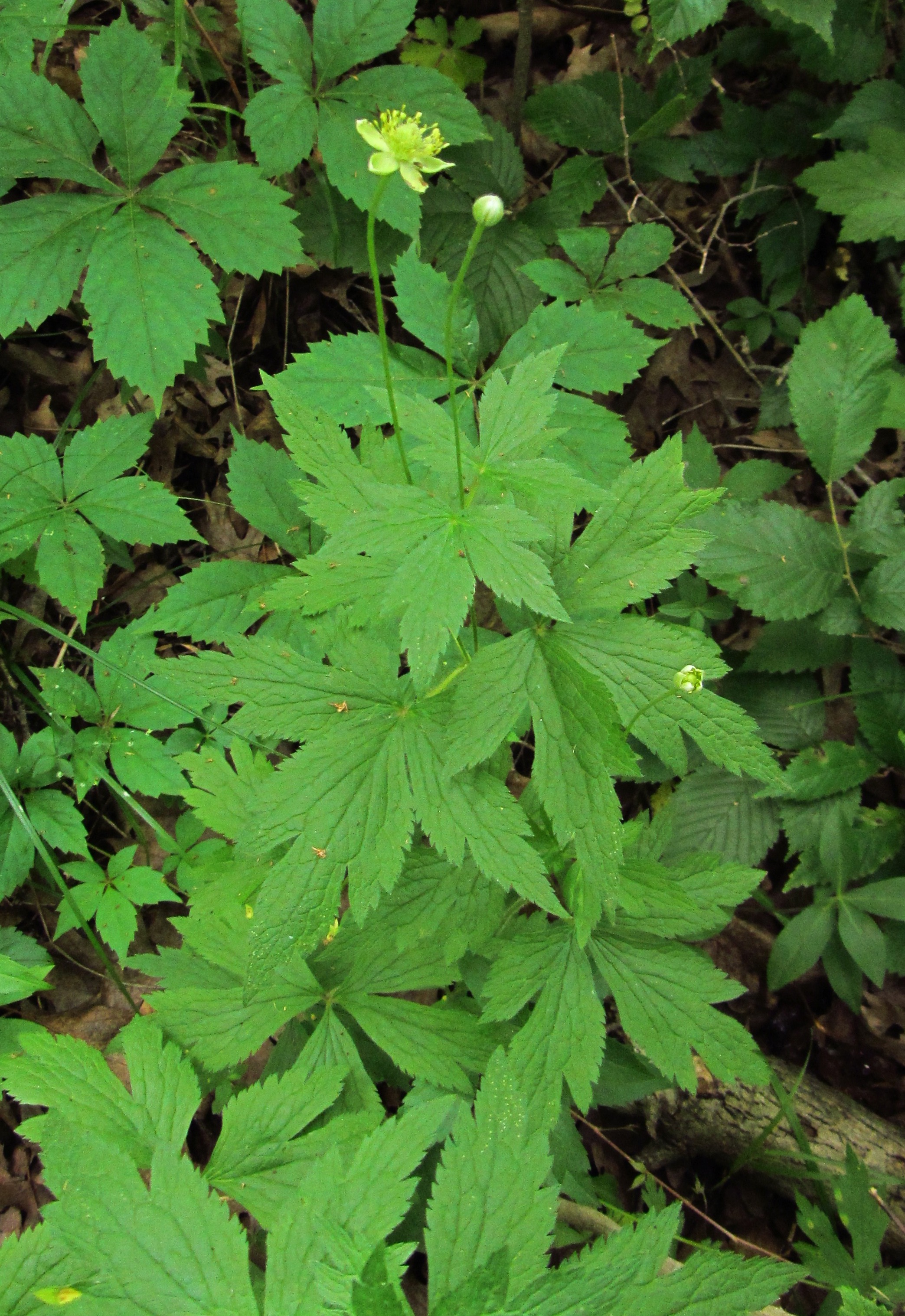 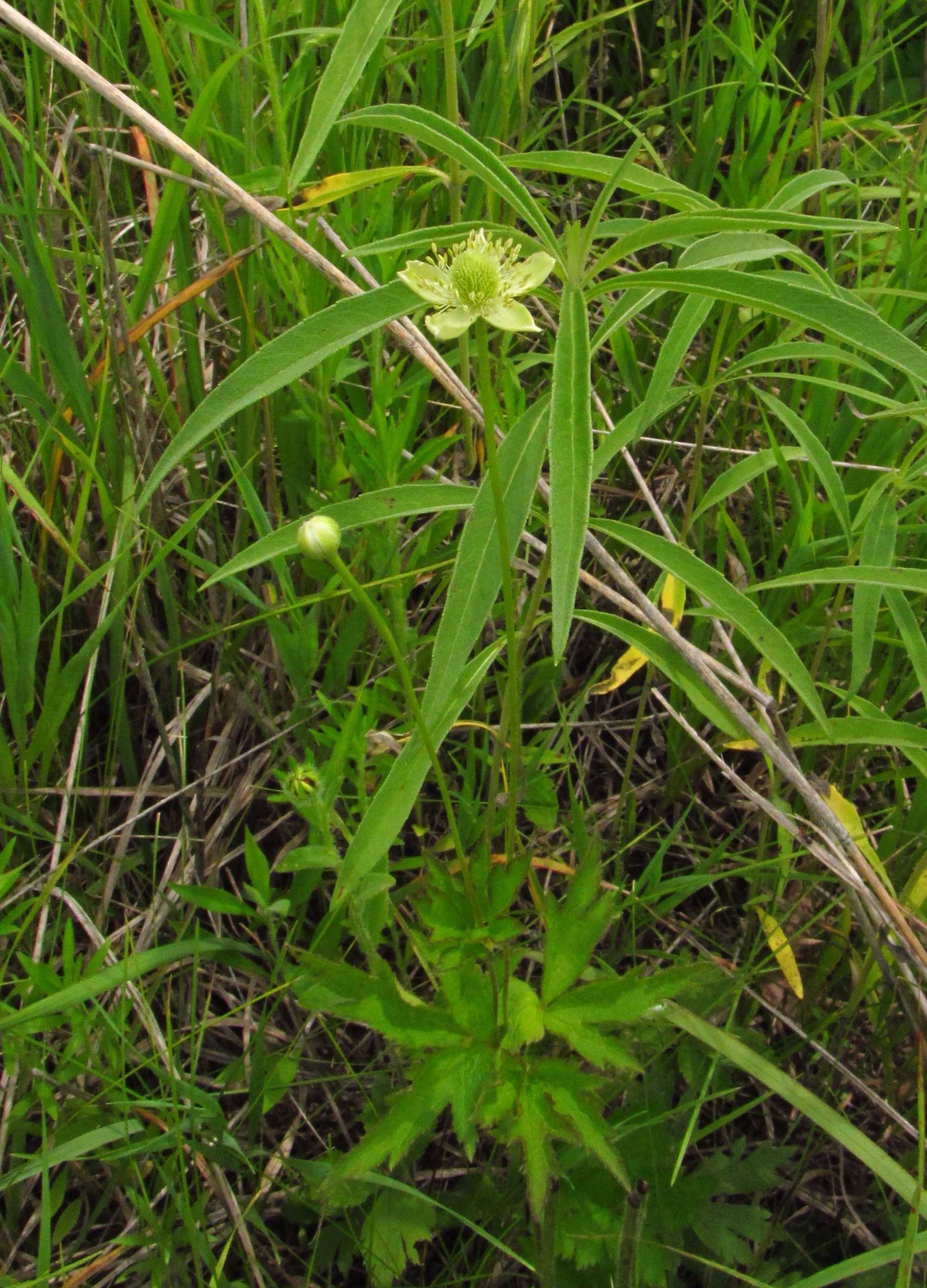 On this nearby plant, one of the windflowers was already past its prime. 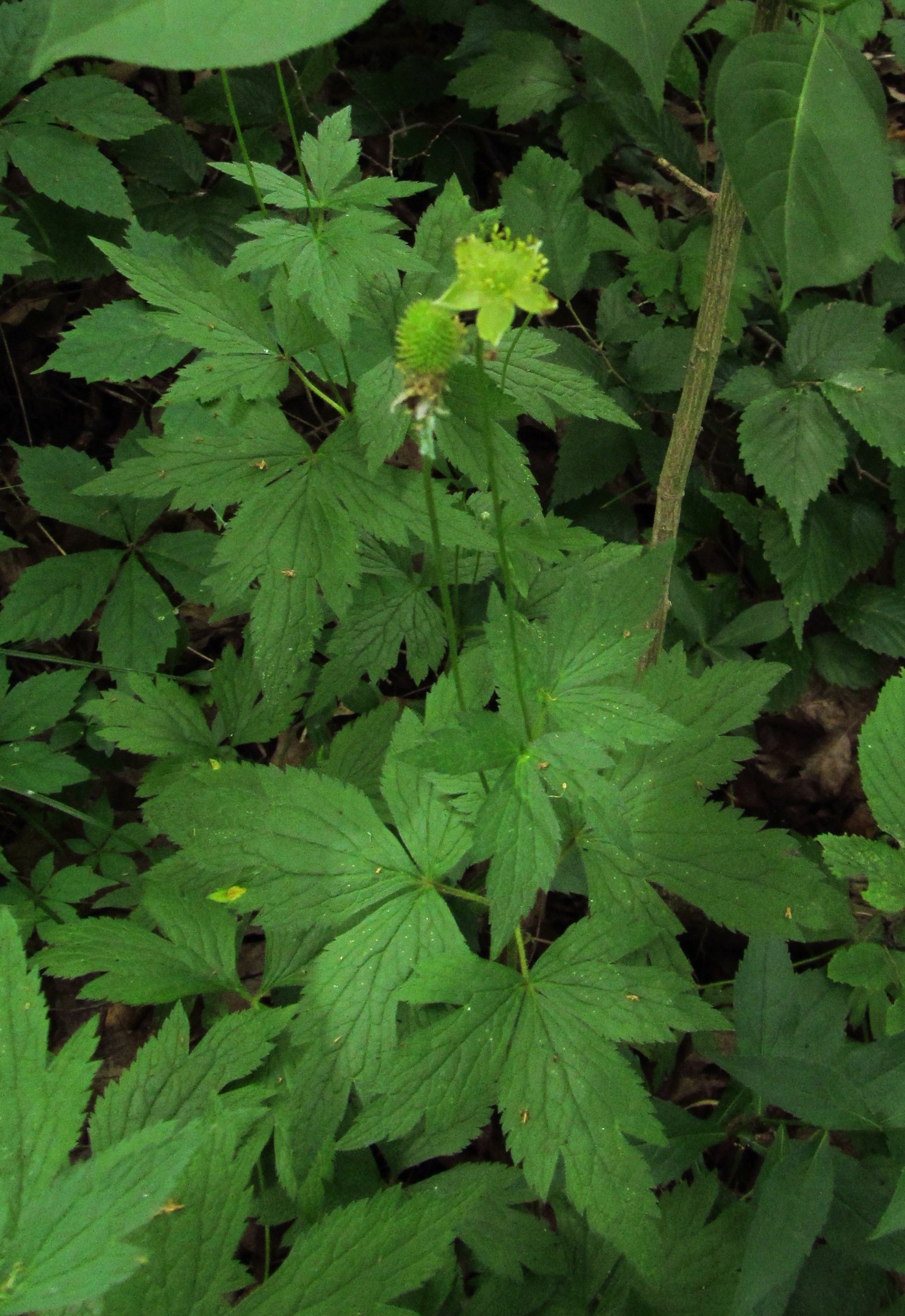 This plant was in a sunnier spot on the prairie. You can see some black-eyed Susans and daisy fleabane in the background. 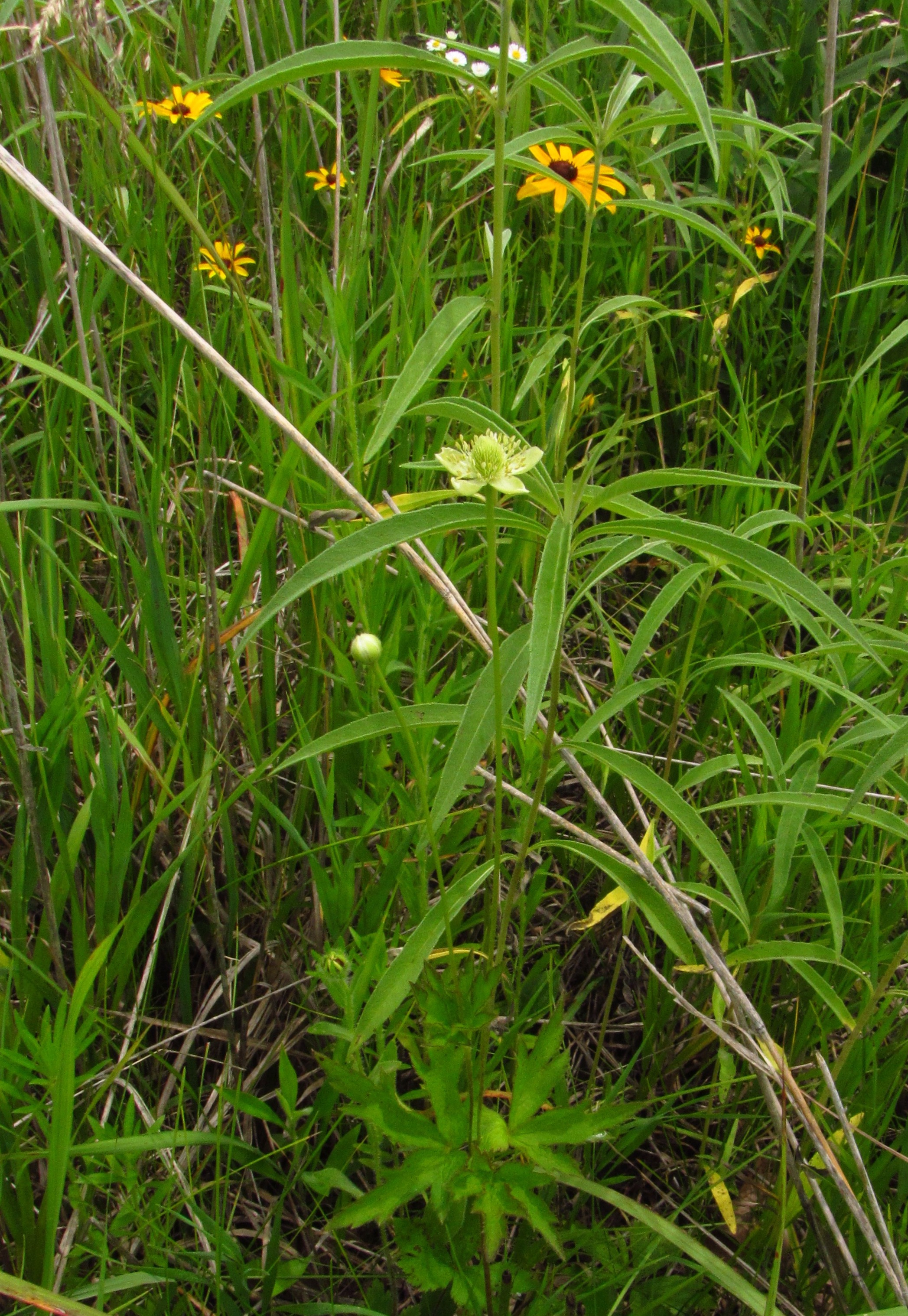 A closer look at a thimbleweed flower from above: 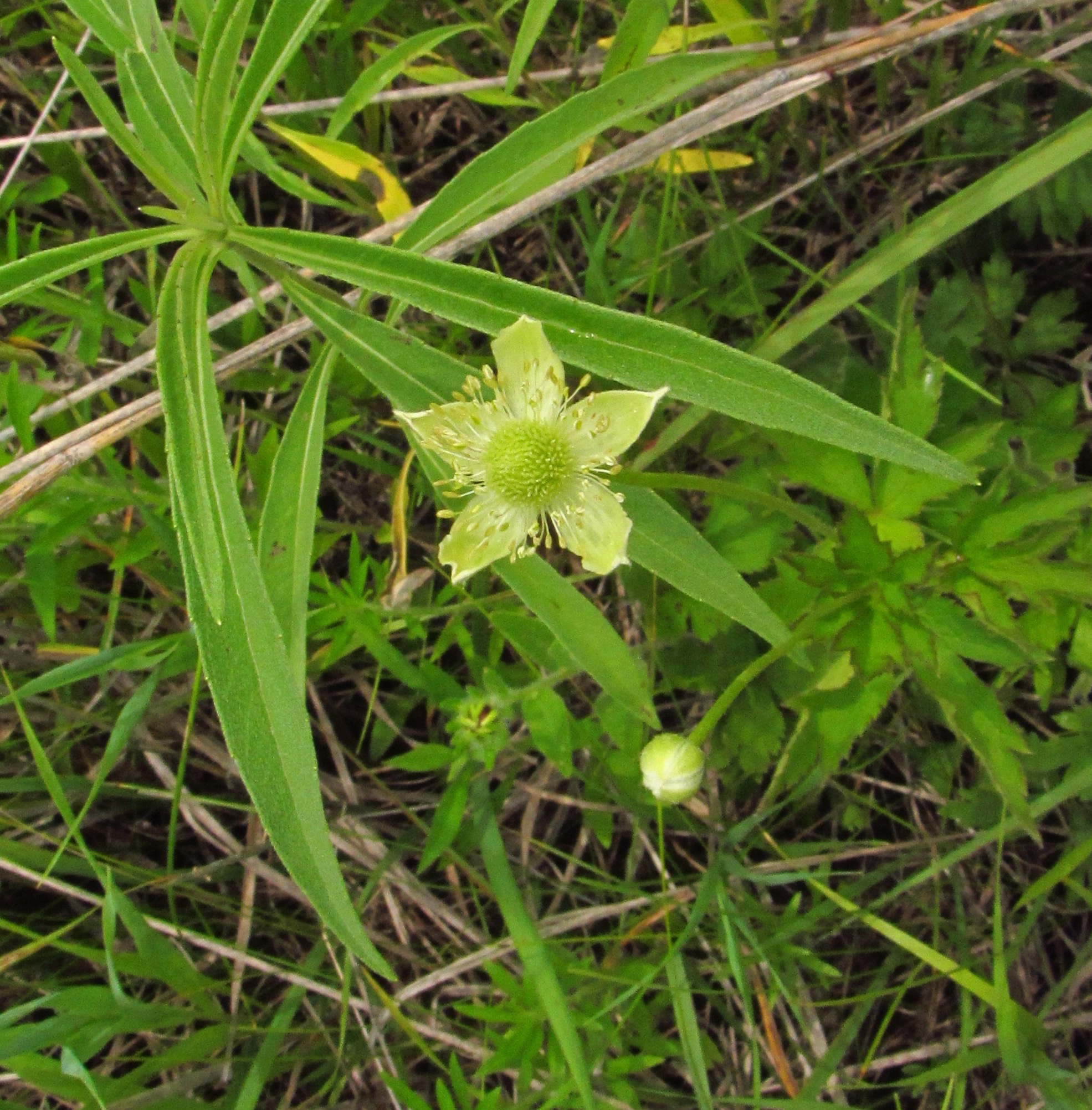 Katie Byerly took the next two close-up photos in northeast Iowa in June 2018: 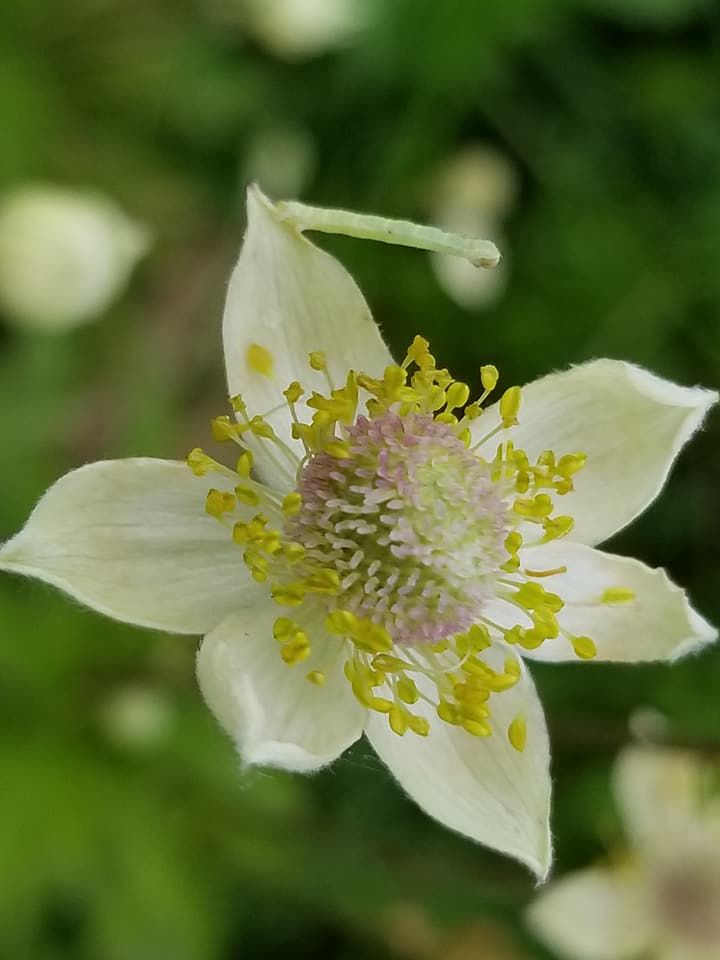 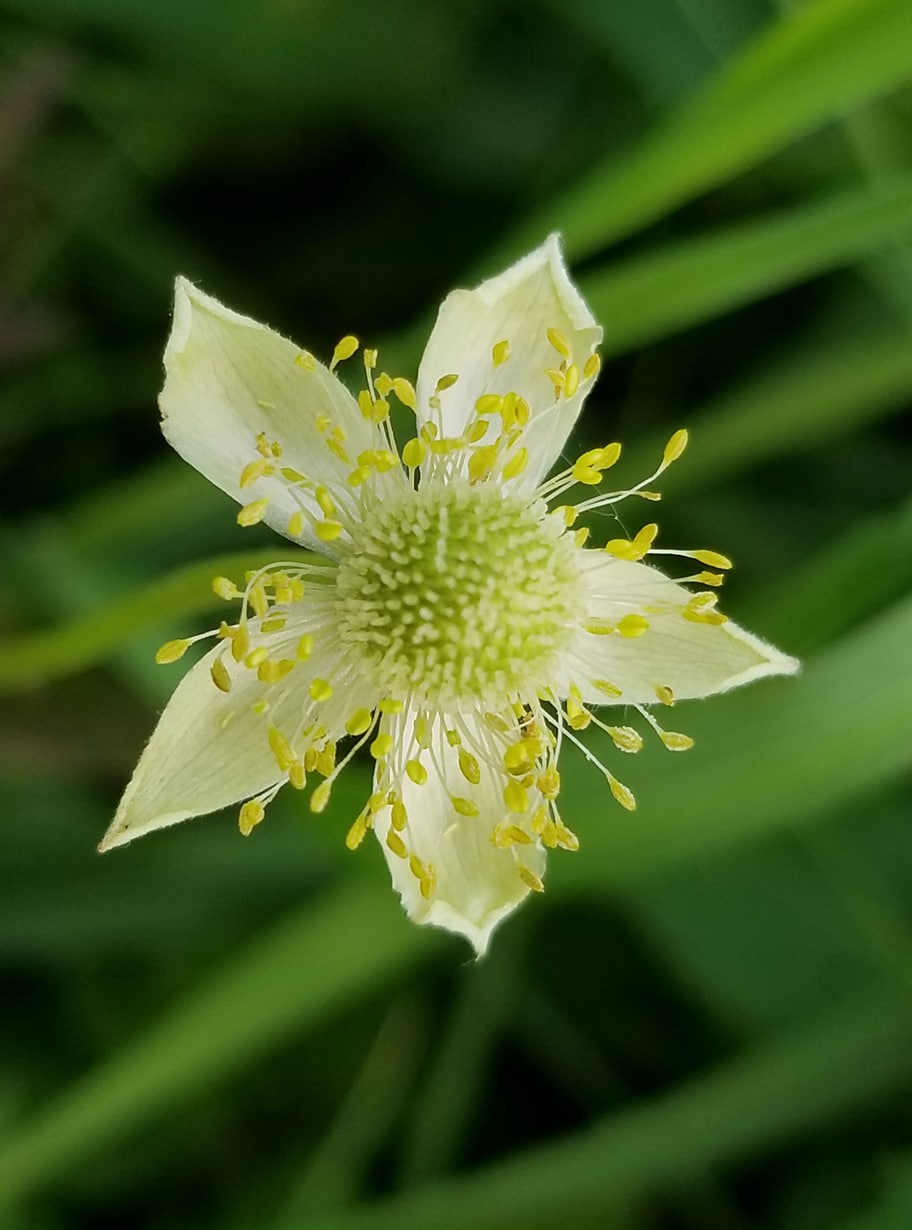 The Illinois Wildflowers site notes, "As the flower withers, the green cone develops into an elongated fruit that resembles a cylindrical green thimble up to 1½" long, hence the name of the plant." You can see one of the seed heads in this photo by Elizabeth Partridge Blessington from last summer: 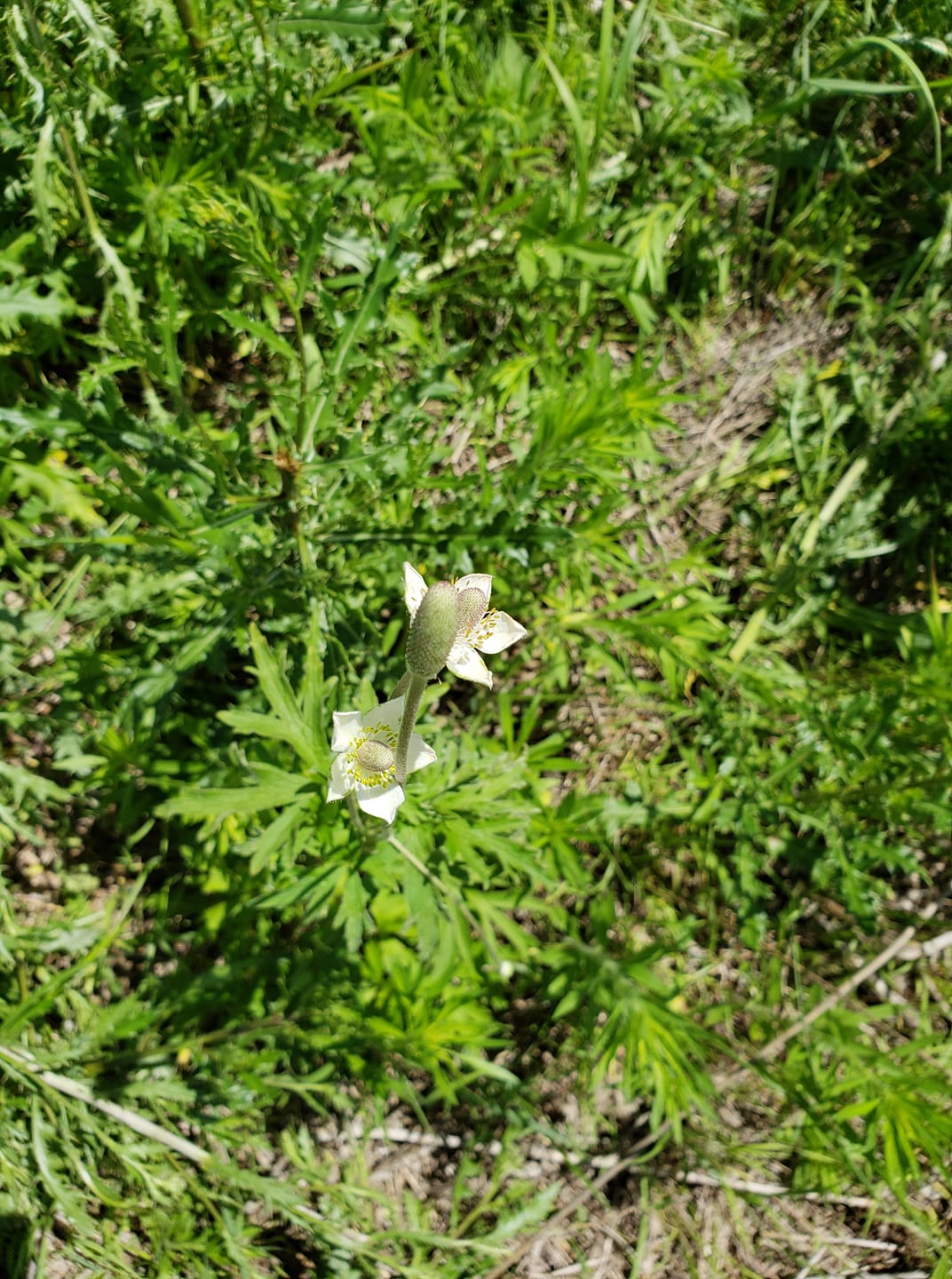 The thimble-like fruit "become transformed into cottony tufts during the fall. These cottony tufts contain scattered dark seeds and persist during the winter," according to Illinois Wildflowers. While walking with Mike Delaney in the wooded area of his property in April 2017, I noticed these plants with feathery seed heads. Mike recently confirmed, these shots are thimbleweed. 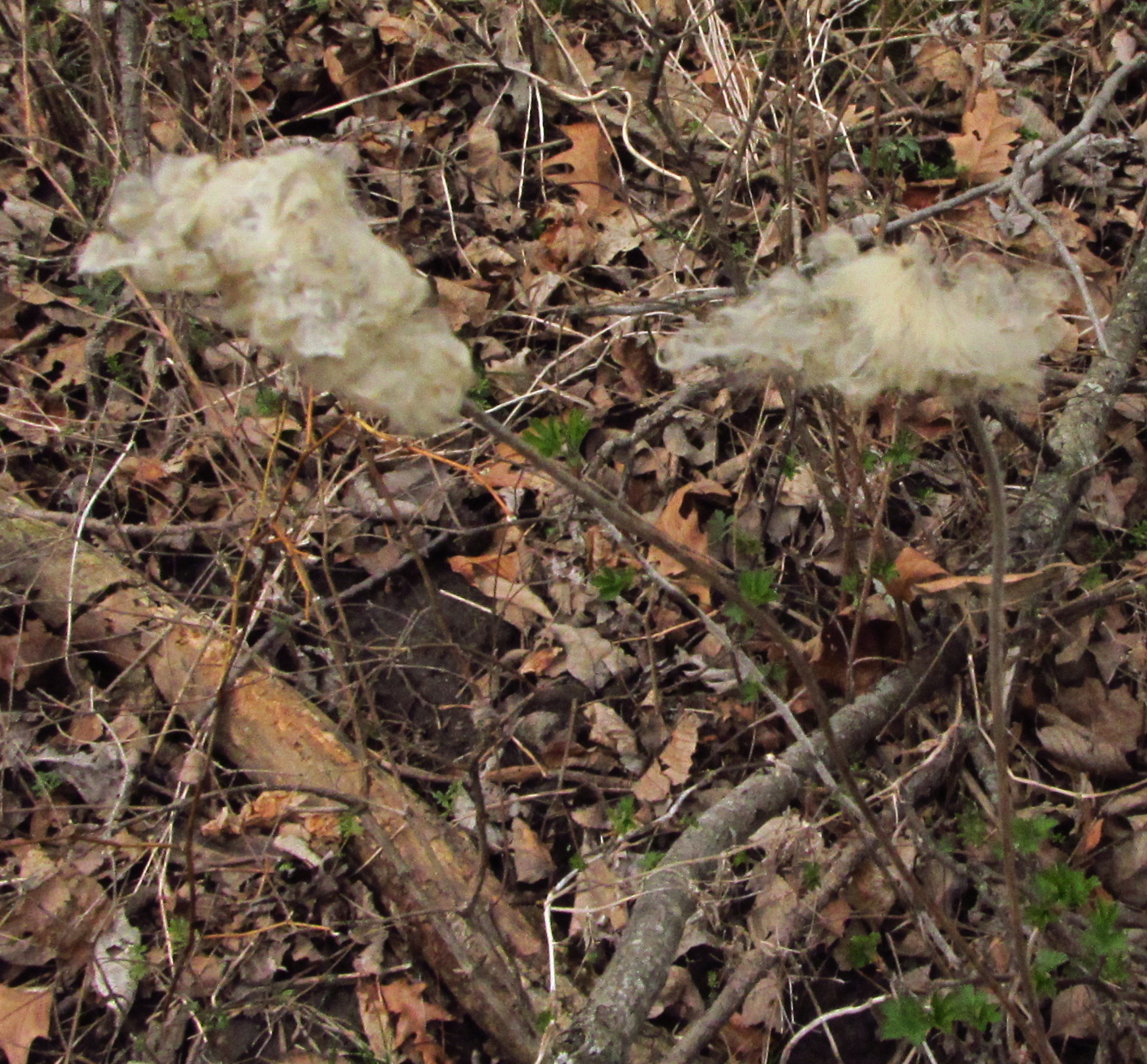 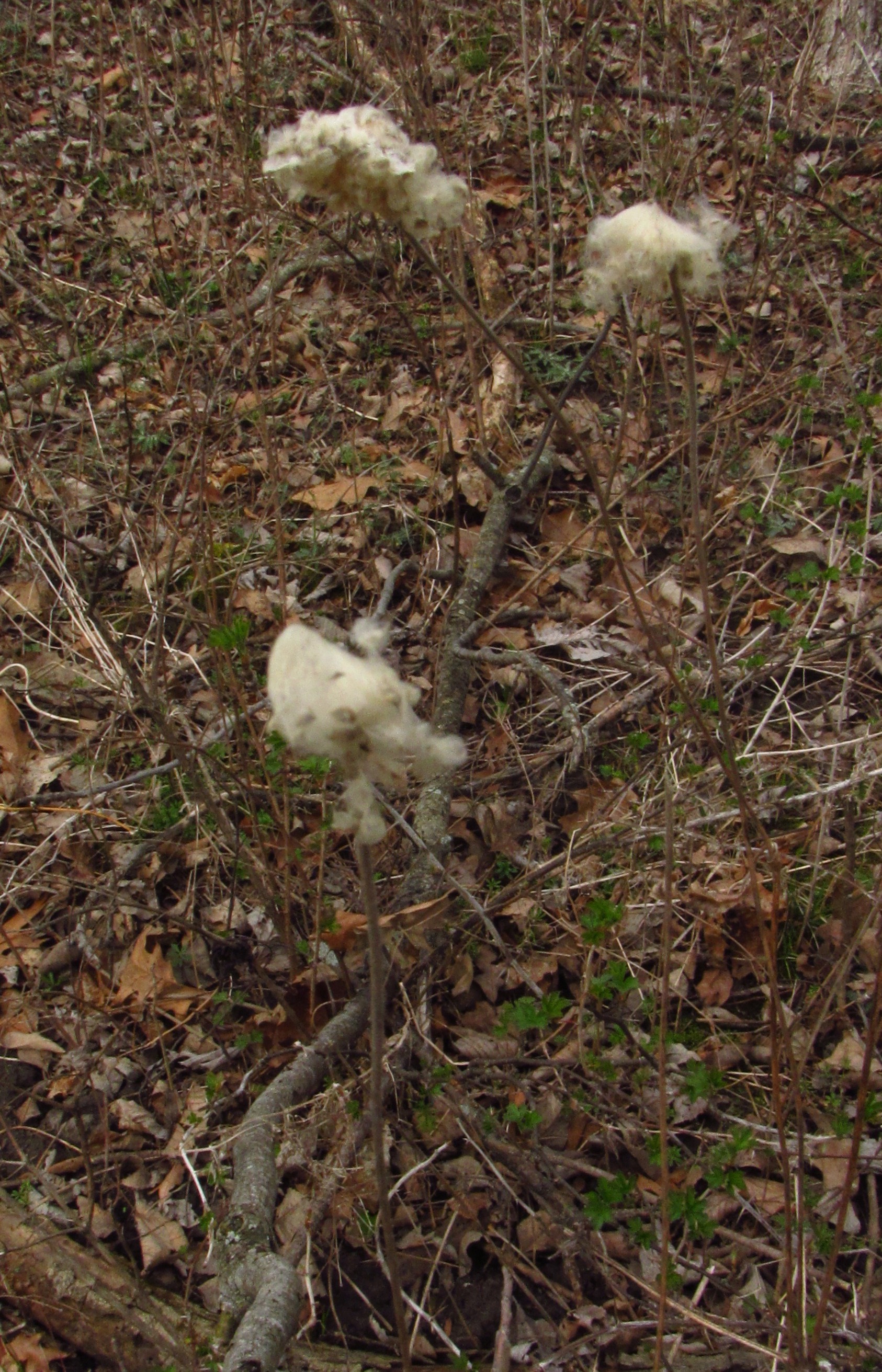 UPDATE: I returned to Mike's property on July 23 and found some fruit forming on plants I had photographed a few weeks earlier. 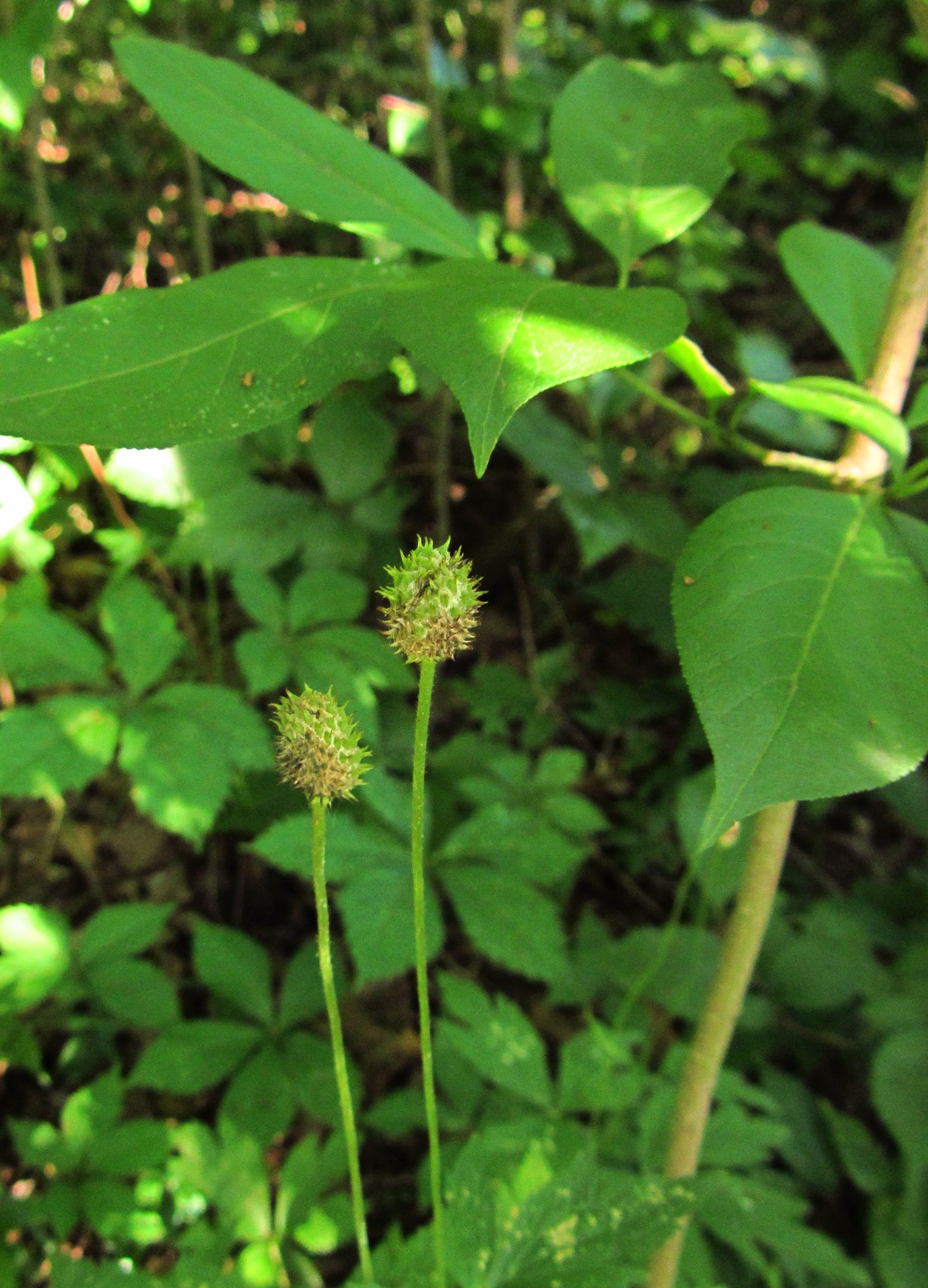