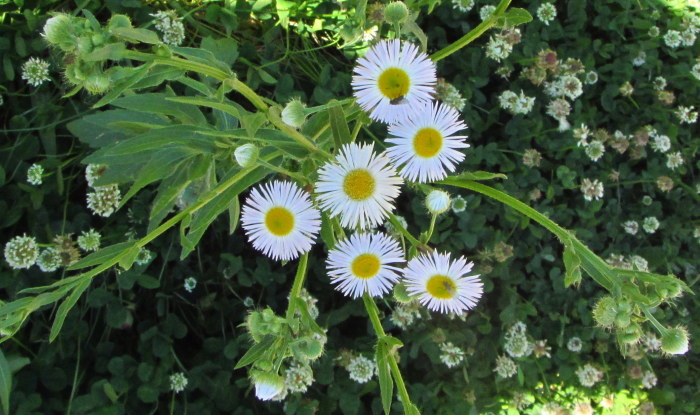 Today's native plant is much more common than the Mayapples Bleeding Heartland showcased last week. Daisy fleabane (Erigeron strigosus) is a member of the aster family that is native to almost the entire U.S. and Canada.

The Minnesota Wildflowers website notes of daisy fleabane, "Leaves near the base are elliptic, spatula-shaped to rounded, tapering to a slender stalk, becoming stalkless and more lance-oblong or linear farther up the stem." Both kinds of leaves are visible in this photo by Katie Byerly, taken at the Lime Creek Nature Center (Cerro Gordo County) this week. 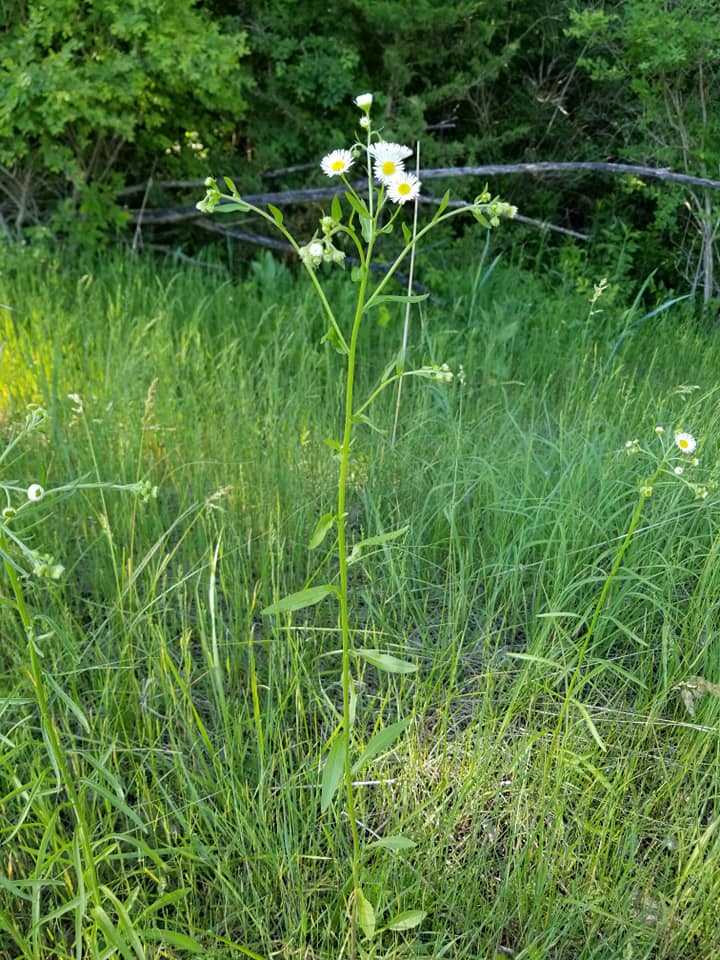 A closer view of the leaves, thanks to Katie: 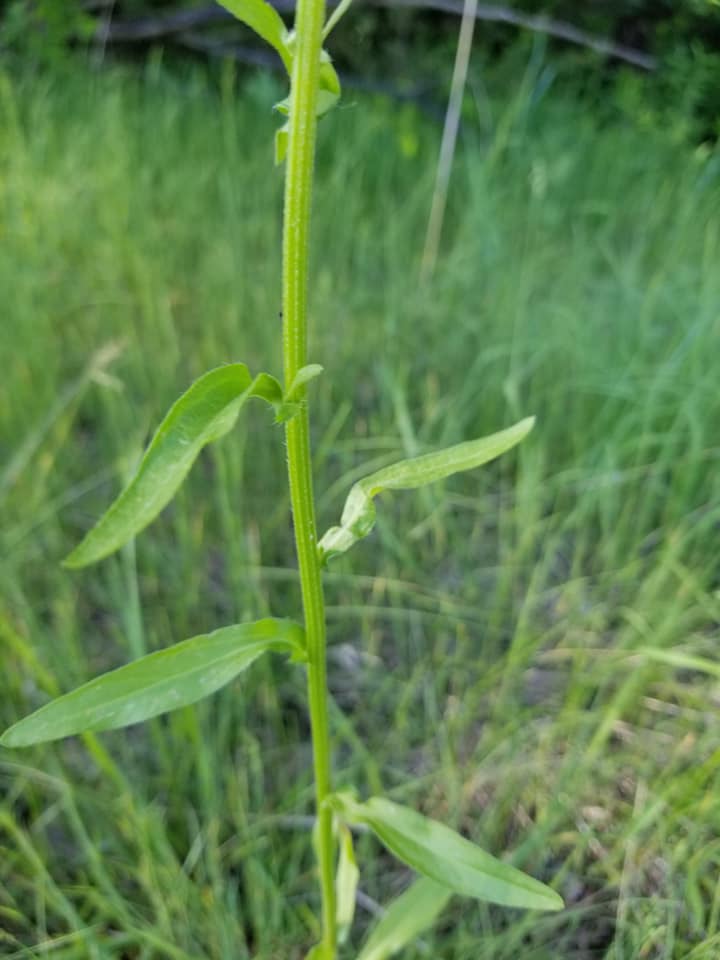 Daisy fleabane typically starts blooming in Iowa in late May, and plants may still be flowering late in the summer. Here's another one of Katie's pictures, of a plant starting to bloom. 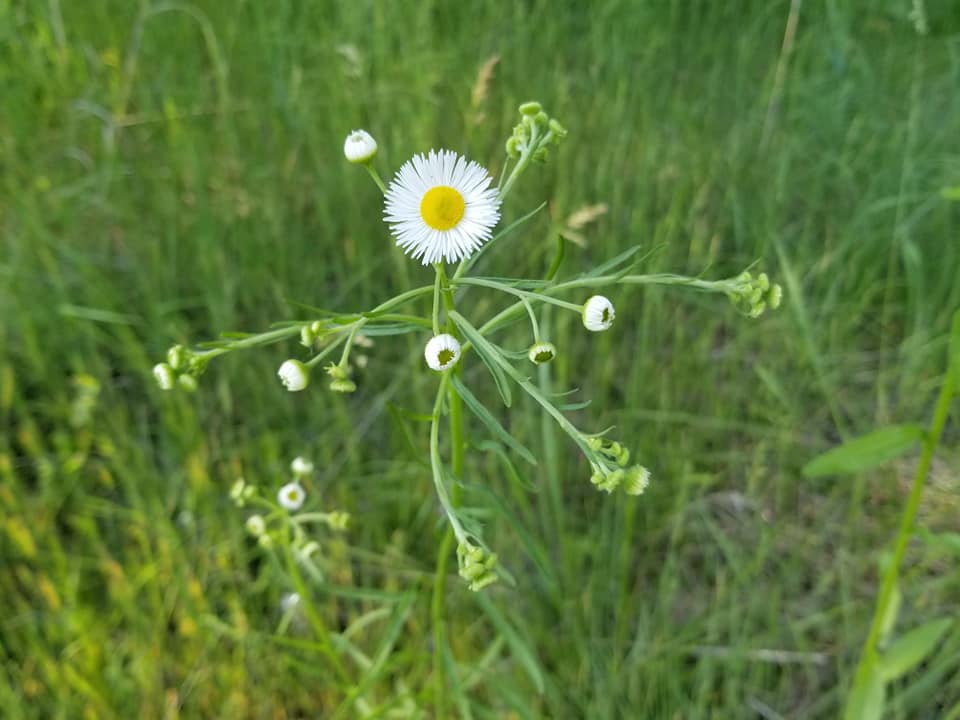 As with other asters, what a casual viewer might see as one flower is in fact a flowerhead with many florets. The Illinois Wildflowers site describes them as follows:

Individual flowerheads span about ½" across and they have a daisy-like appearance. Each flowerhead has 40-100 ray florets that surround numerous disk florets. The petaloid rays of the former florets are usually white and linear in shape; sometimes these rays are pink- or purple-tinted.

Here are a couple photos I took of daisy fleabane in past years: 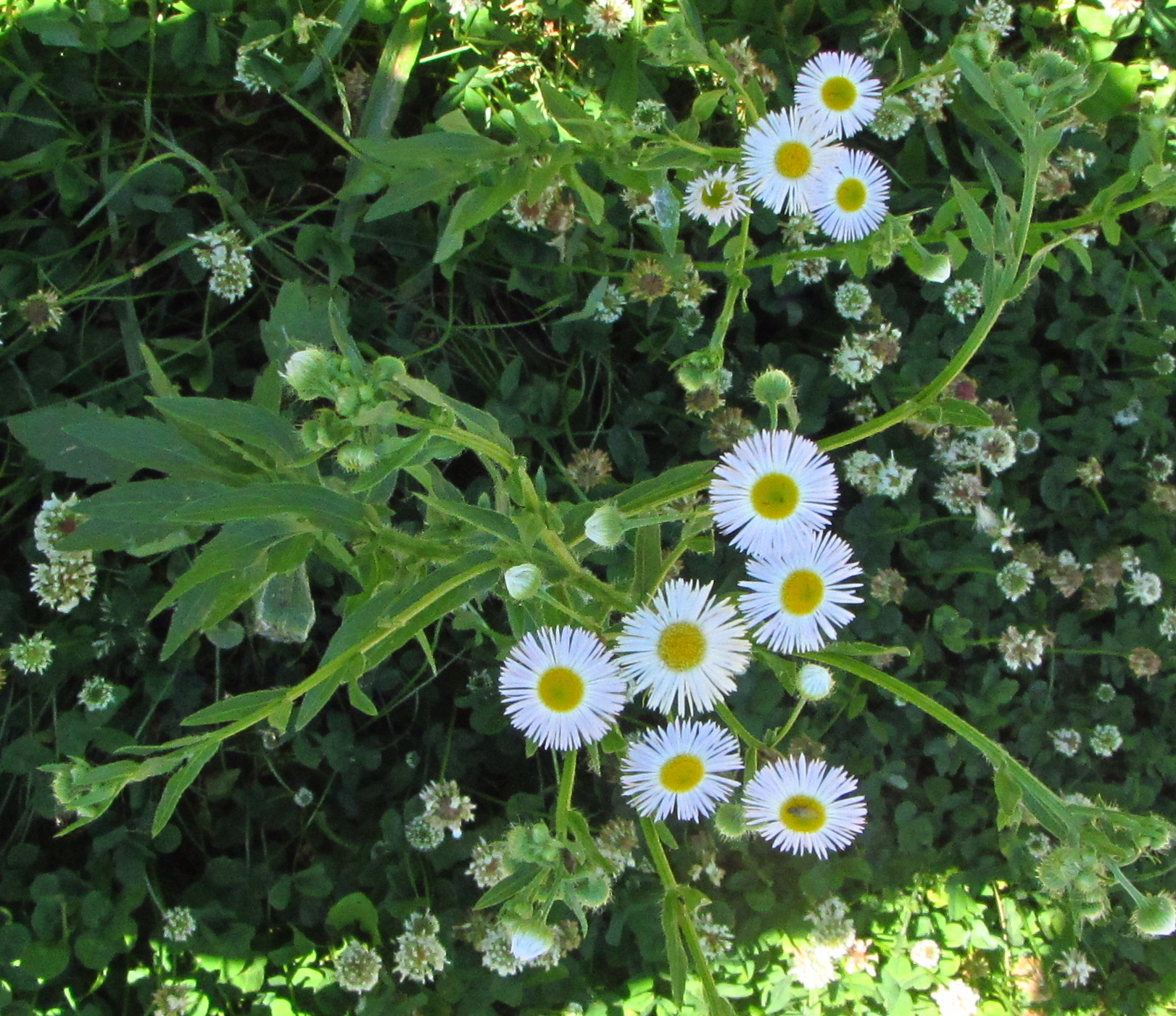 One plant can have dozens of flowerheads. 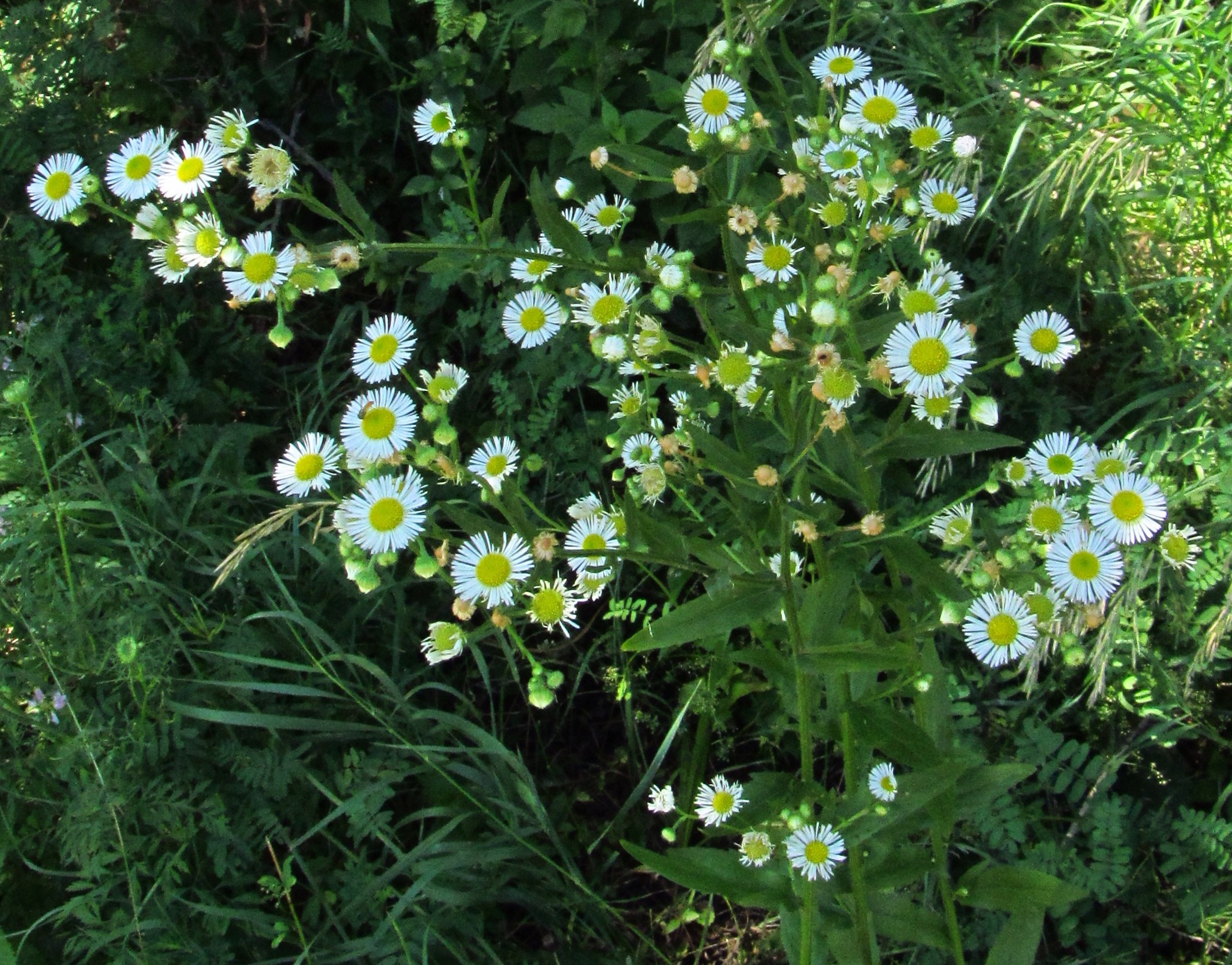 This plant had pinkish ray florets. 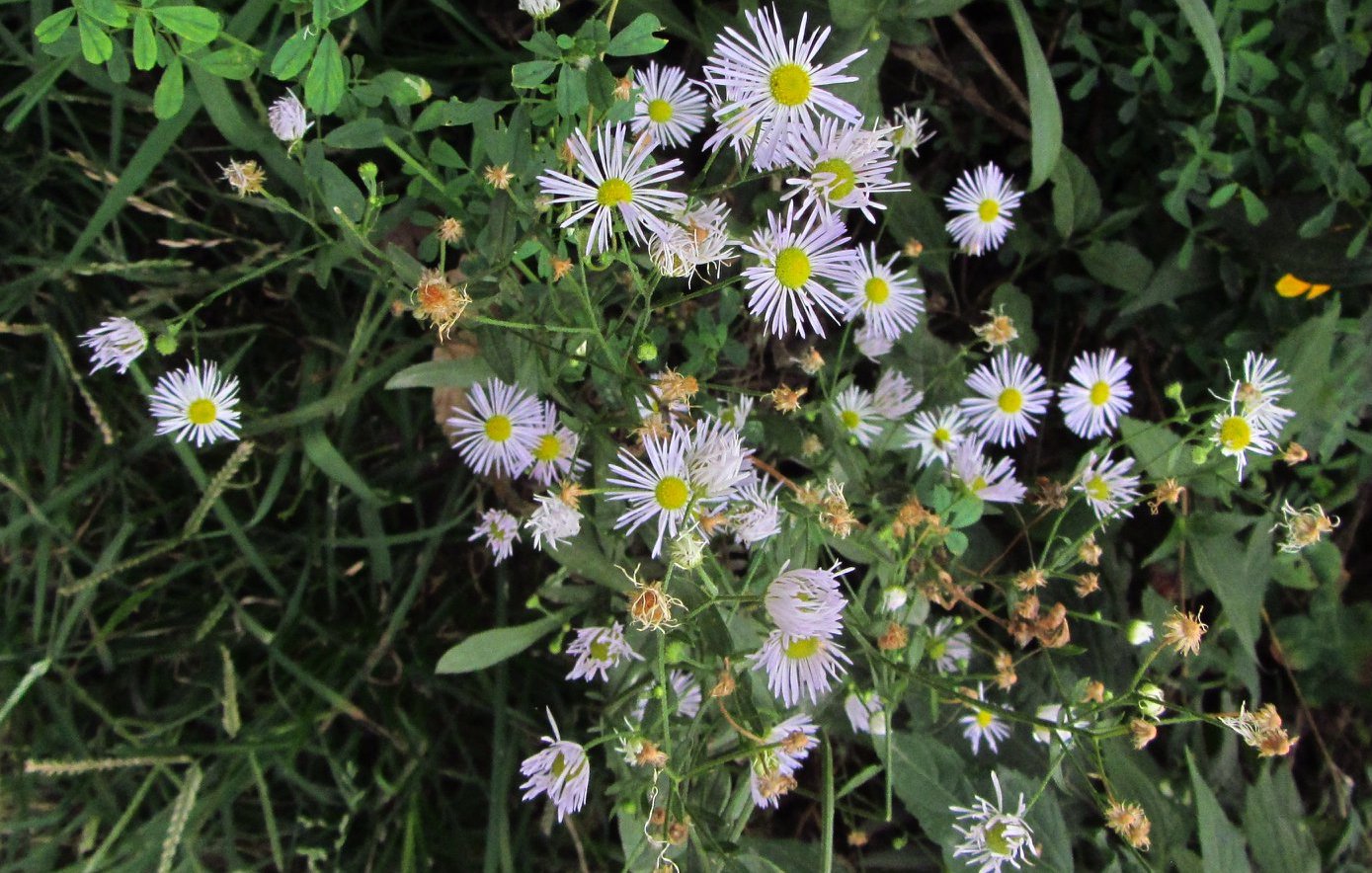 Lora Conrad photographed the first daisy fleabane she found blooming in Van Buren County this year on May 23. Its ray florets were unusually pink. Upon visiting the same plant this week, Lora found the ray florets were white. 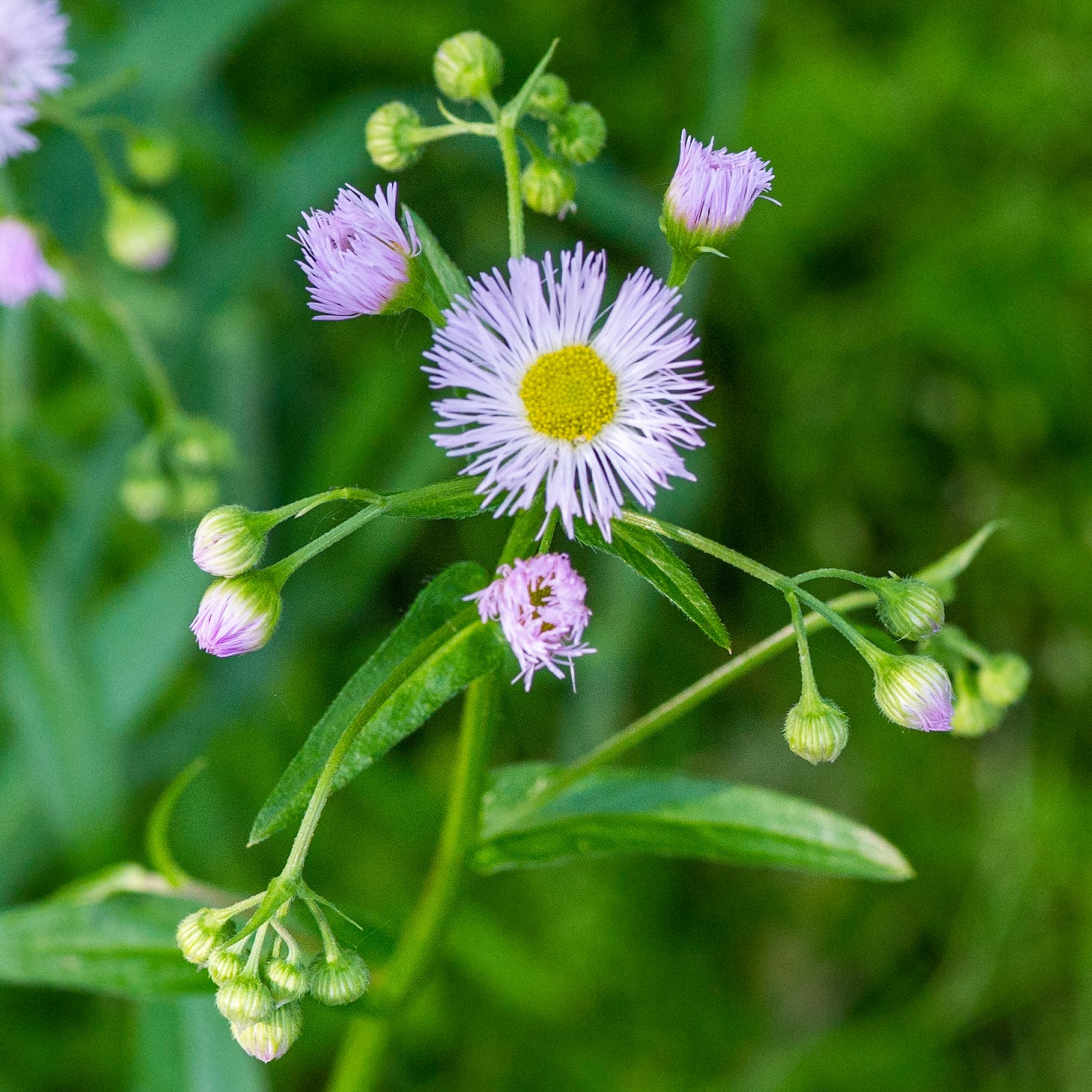 Here are a few more close-ups of the flowerheads, from Katie Byerly's photo set: 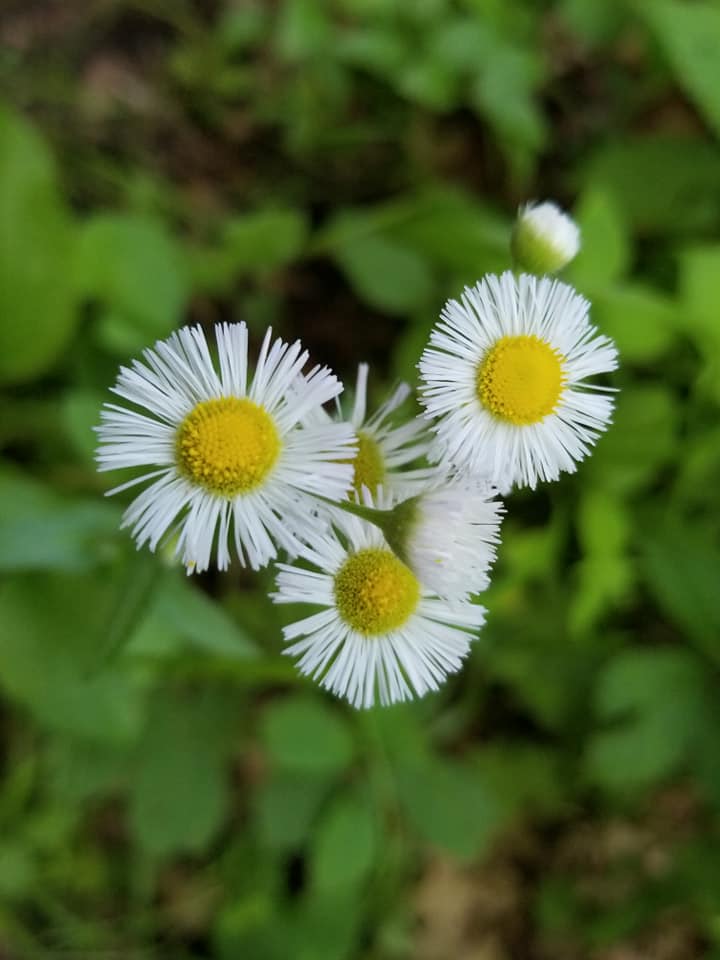 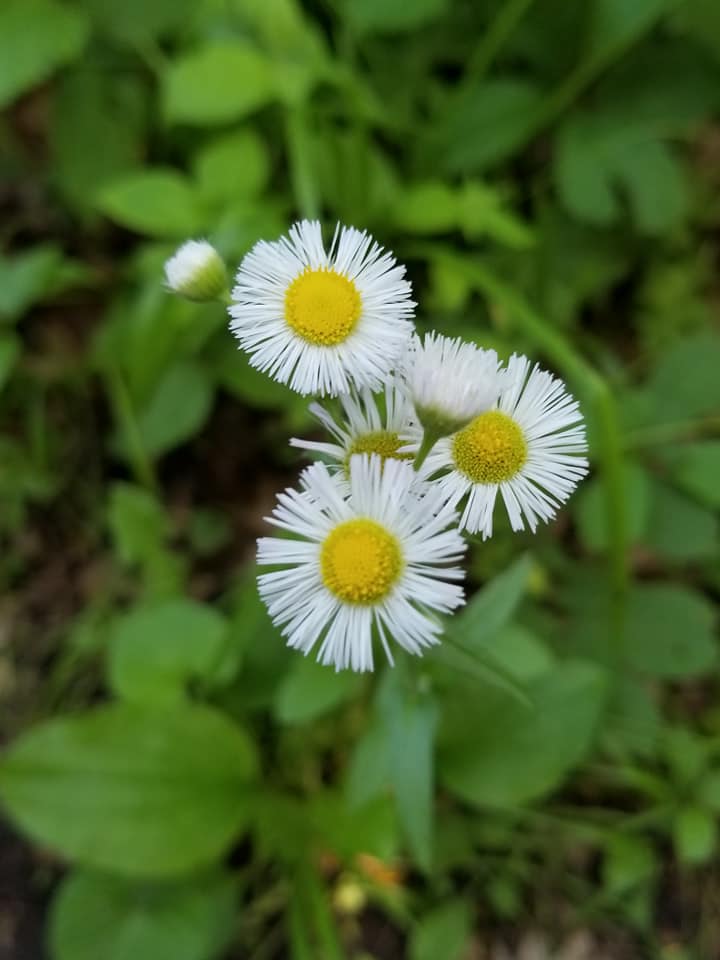 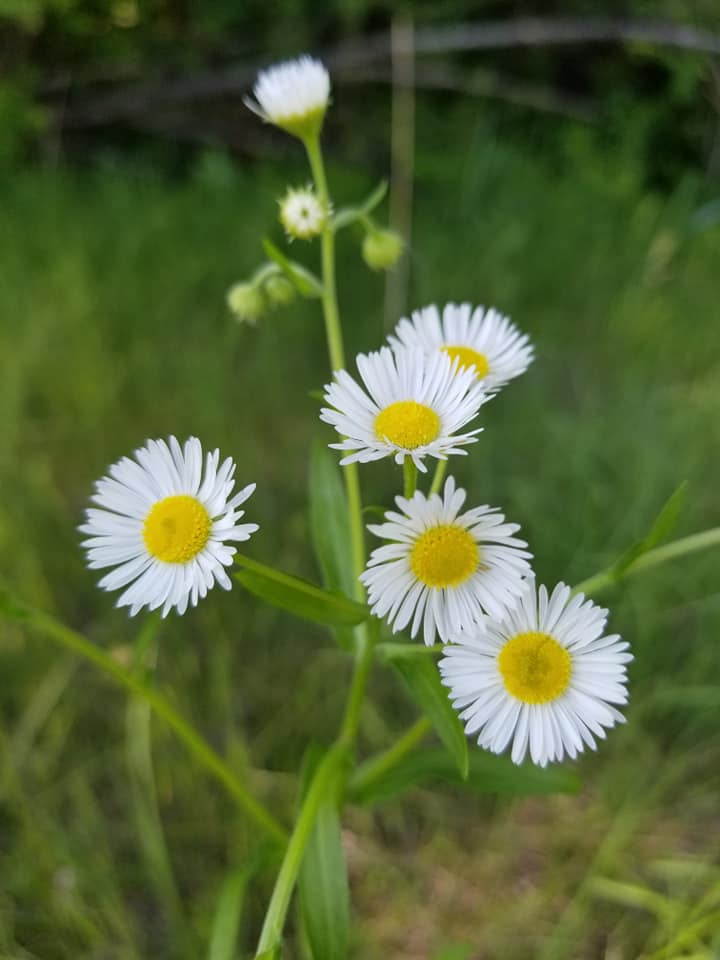 A wide variety of insects are attracted to daisy fleabane, either for the flowers' nectar and pollen or to "feed destructively on the foliage, flowerheads, roots, and plant juices." Katie found some kind of small fly sampling the goods. 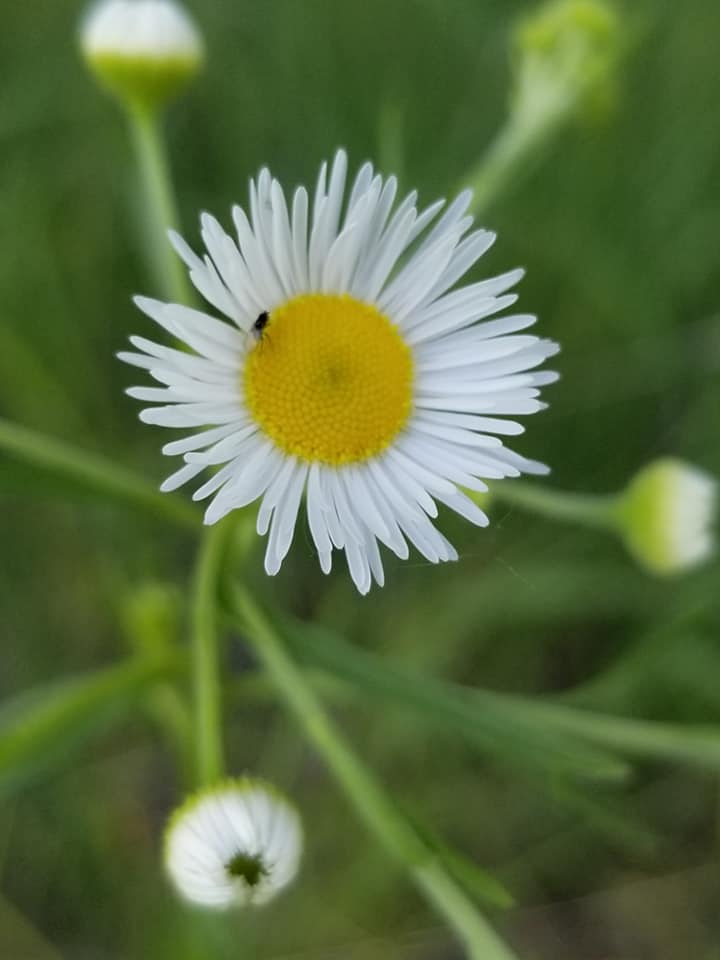 I often see daisy fleabane growing among other plants. The yellow flowers near the right edge of this frame are brown-eyed Susan (I took this shot later in the summer). 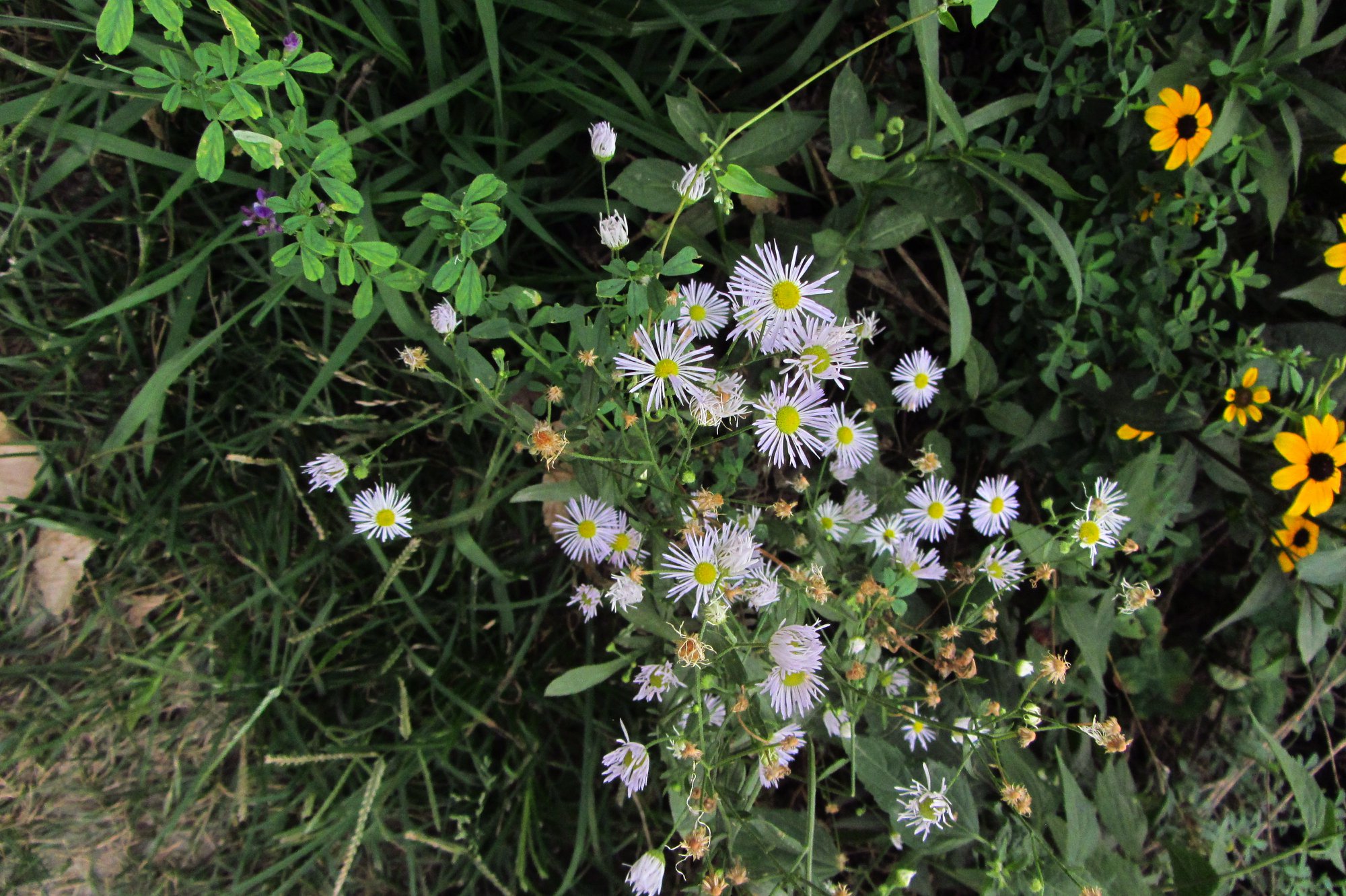 Some daisy fleabane in the middle of a patch of purple poppy mallow: 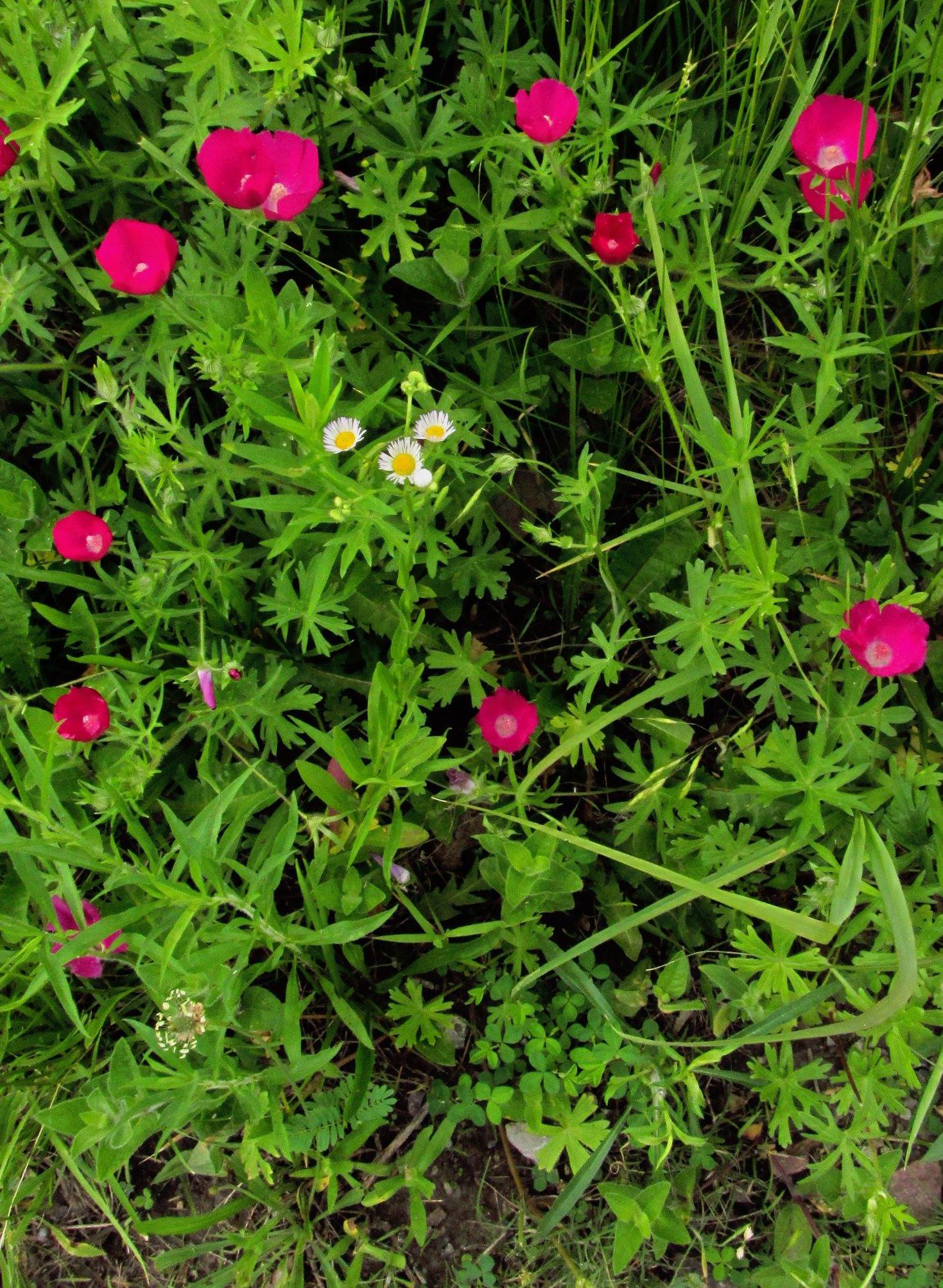 A striking yellow flowerhead of ox-eye, also known as false sunflower, stole the show from the daisy fleabane on this restored prairie. 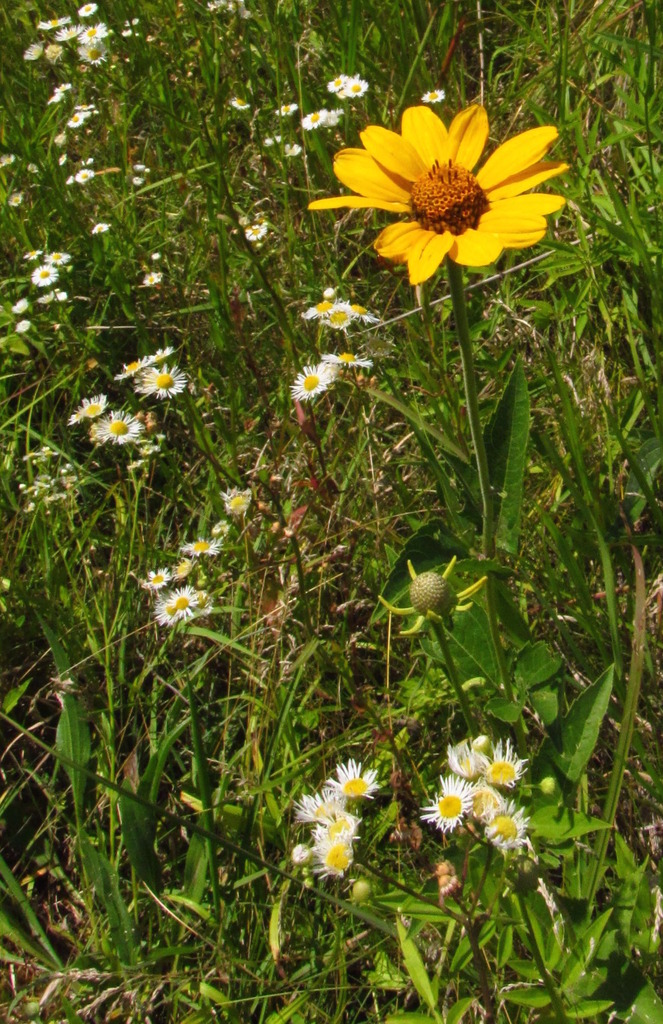