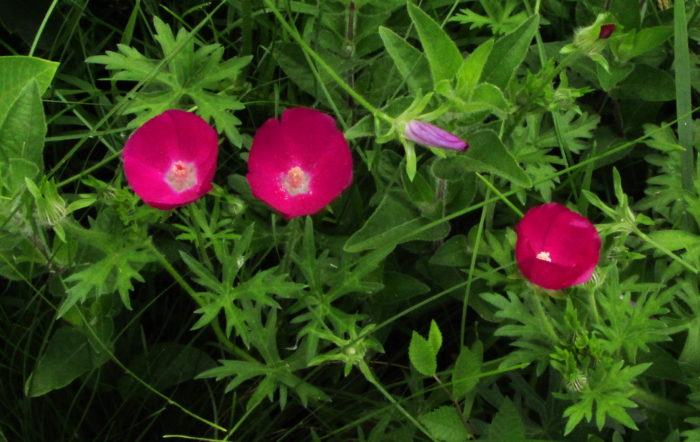 Mid-summer is a fantastic time for wildflower-spotting in Iowa. If you visit a prairie habitat this weekend or on July 4, you may see common milkweed, yellow coneflowers, pale purple coneflowers, and purple prairie clover nearing their peak. Wild petunia and black-eyed Susans have started blooming. Along wooded trails, you may find American germander. The non-native (but much-loved by pollinators) chicory flowers are abundant along roadsides. Be careful not to brush up against any wild parsnip--the sap can cause a blistering rash after sun exposure.

Purple poppy mallow (Callirhoe involucrata) is often called a "showy" flower. Its magenta or maroon petals have given the species the common name winecup, and you are unlikely to overlook them if you are anywhere in the vicinity. The first blossoms typically appear in May in central Iowa, but this plant has a relatively long blooming period. I found quite a few flowers on June 27.

According to the U.S. Department of Agriculture, purple poppy mallow is is native to most of the Midwest and the plains. The Illinois Wildflowers site notes, "this plant often grows in poor soil that contains sand, gravel, or clay." It can thrive in "dry prairies, areas along railroads and roadsides, and abandoned fields."

I've wanted to write about these flowers for years but held off because I find them difficult to photograph. The petals often end up looking flat, like shapes in a Matisse painting. I took all of the enclosed pictures this month at prairie plantings along the Meredith bike trail in Des Moines, near SW 9th St and MacRae Park.

Here's one of several purple poppy mallow colonies along a stretch of the trail between Gray's Lake and downtown. 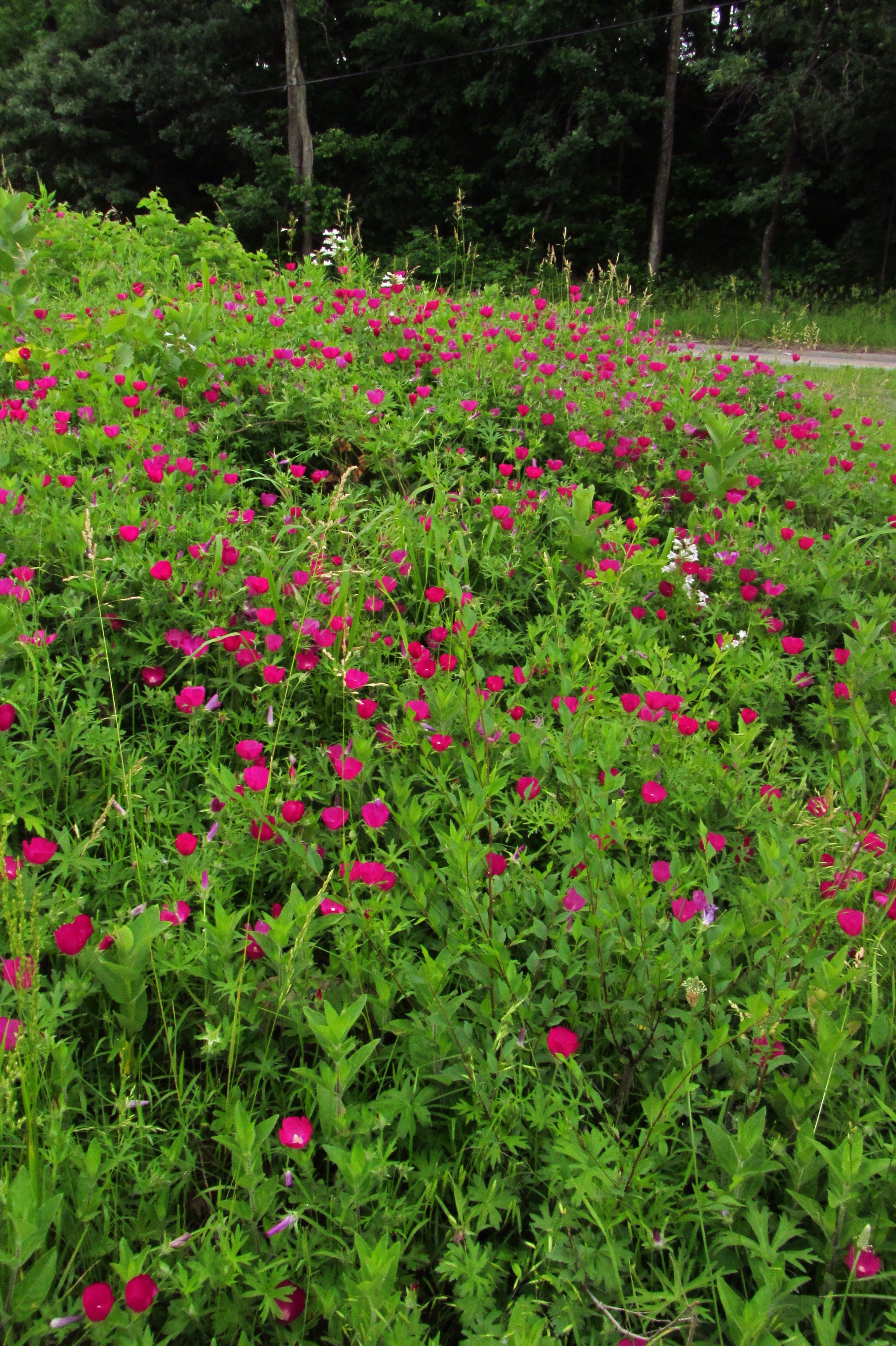 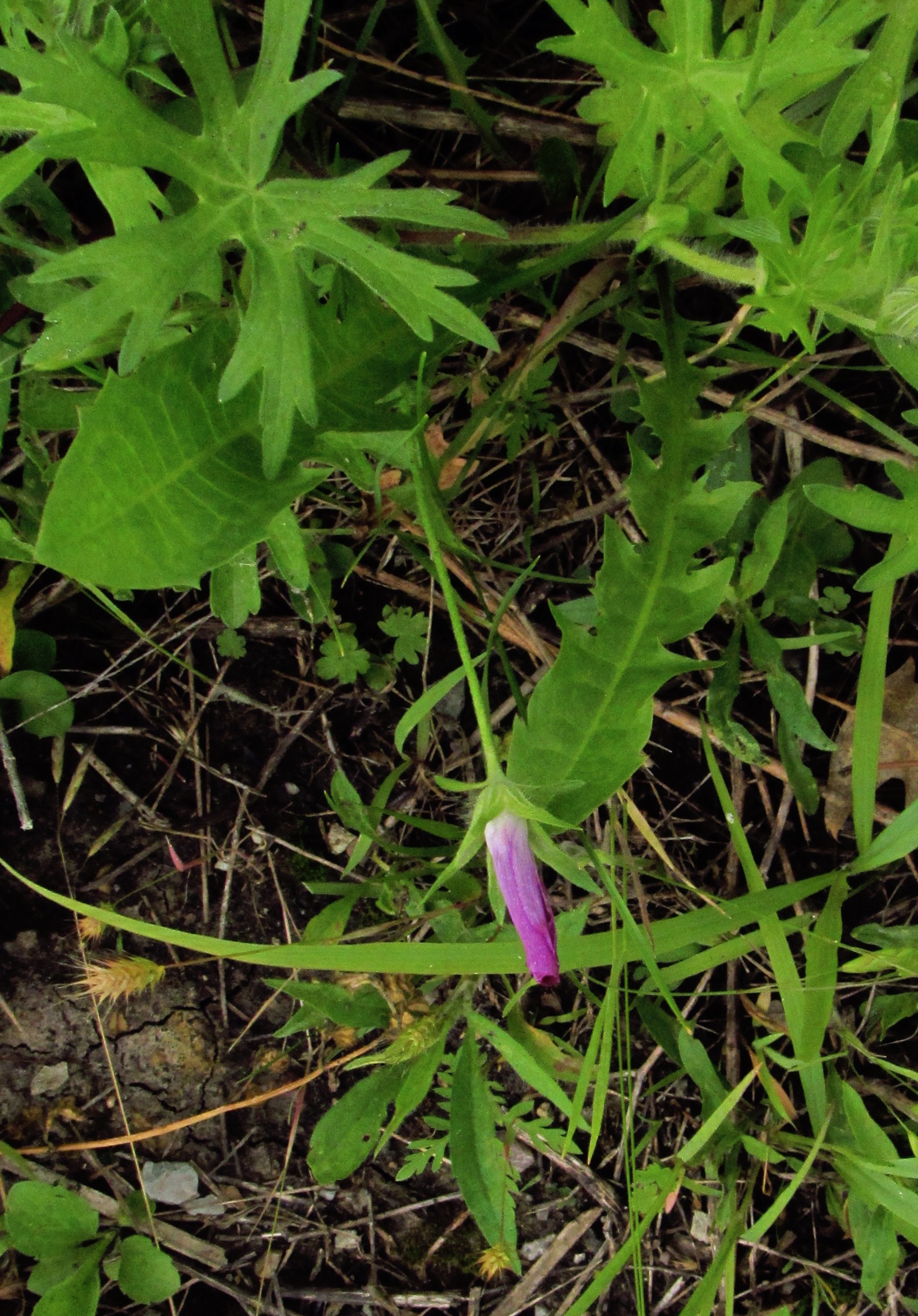 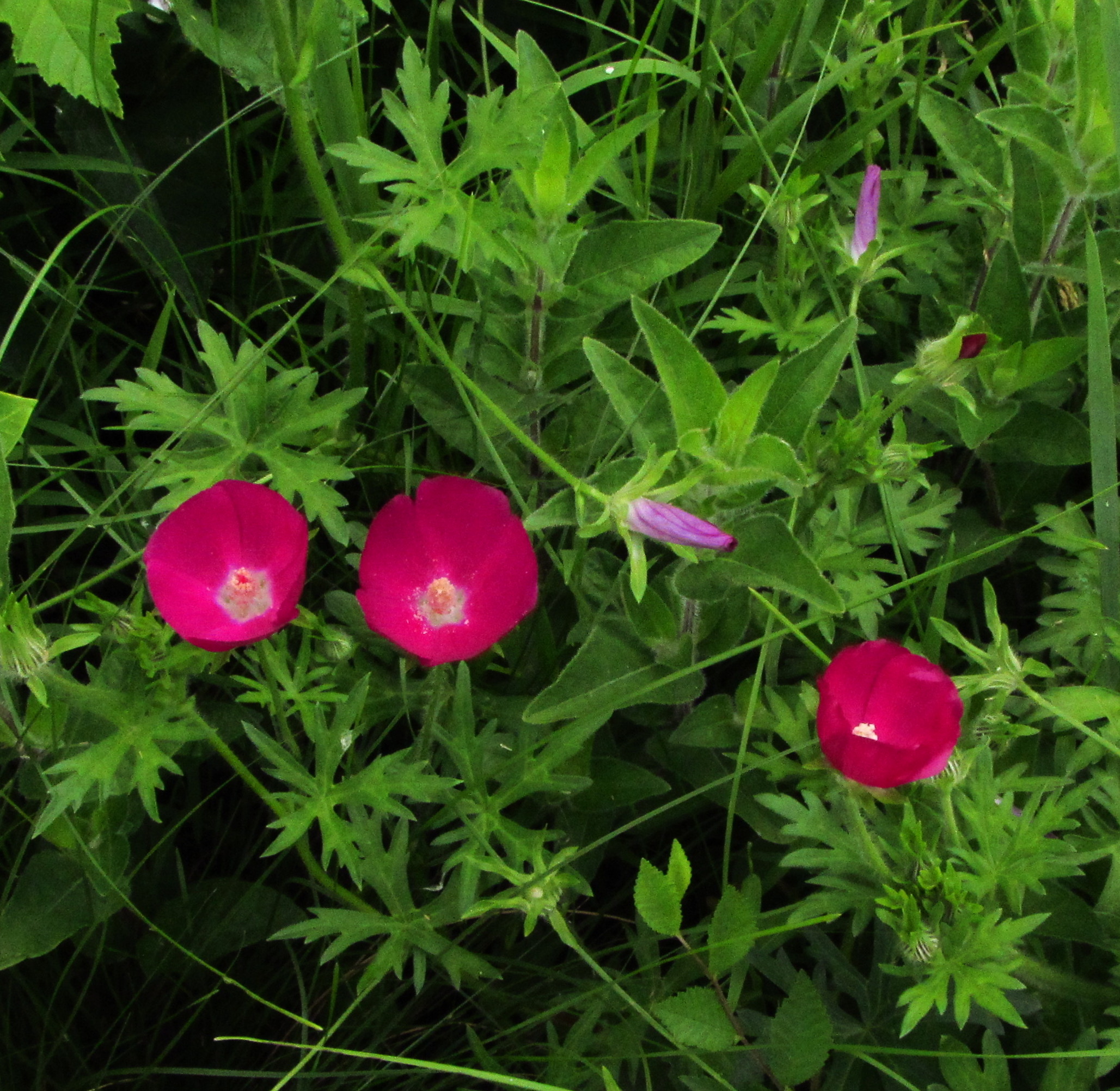 Near the left side of the frame, a flower is opening: 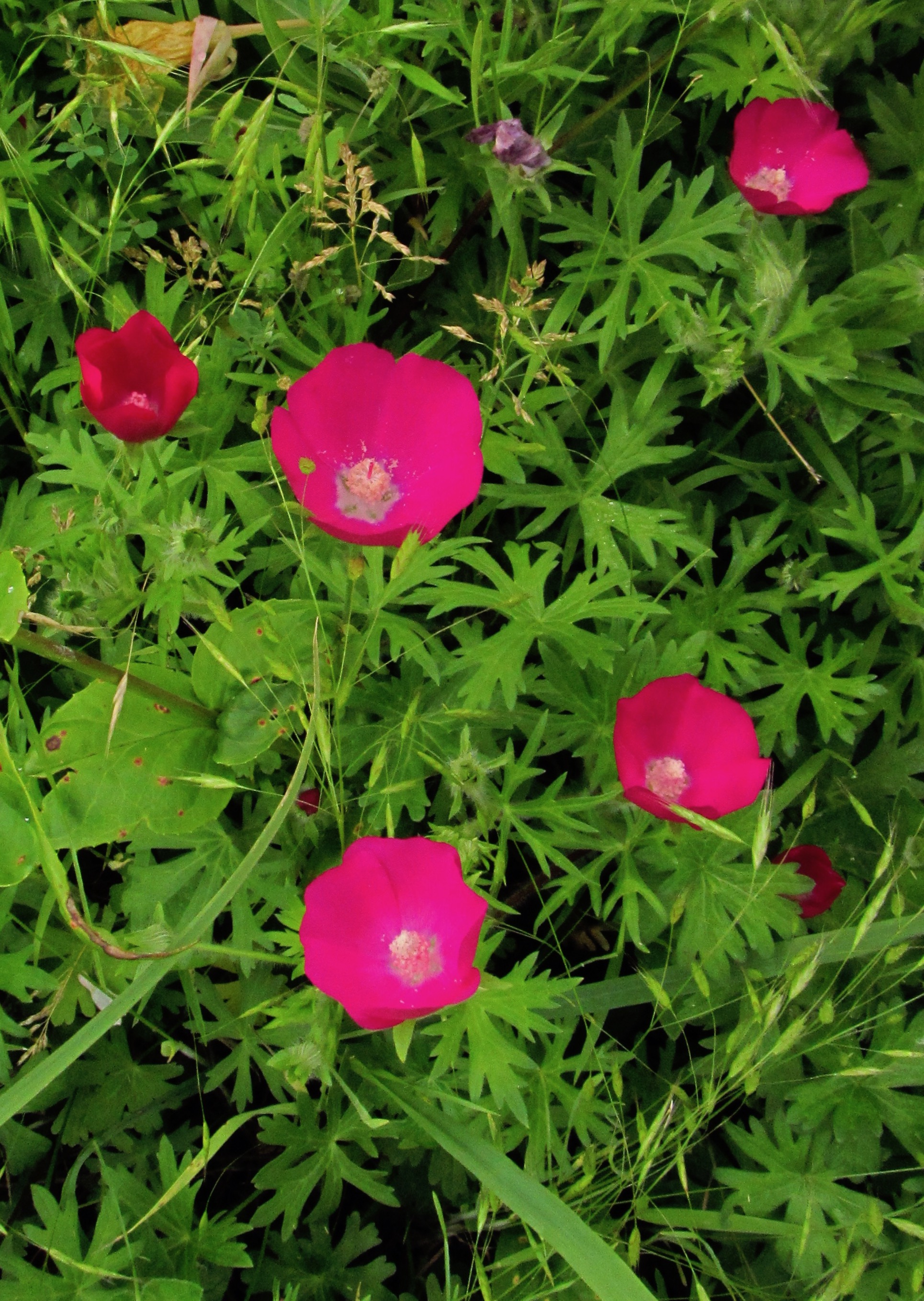 The five petals spread farther apart after a while: 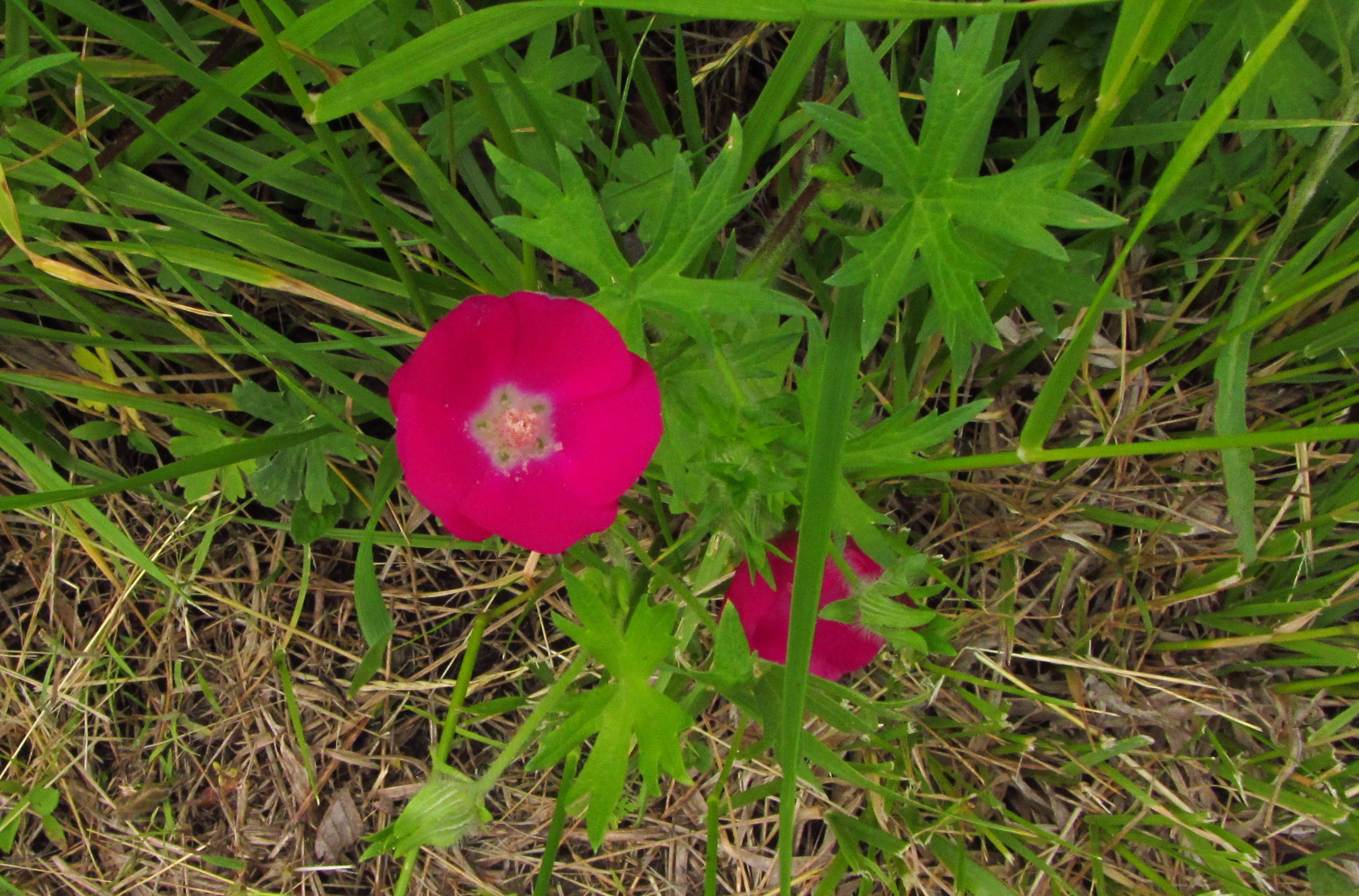 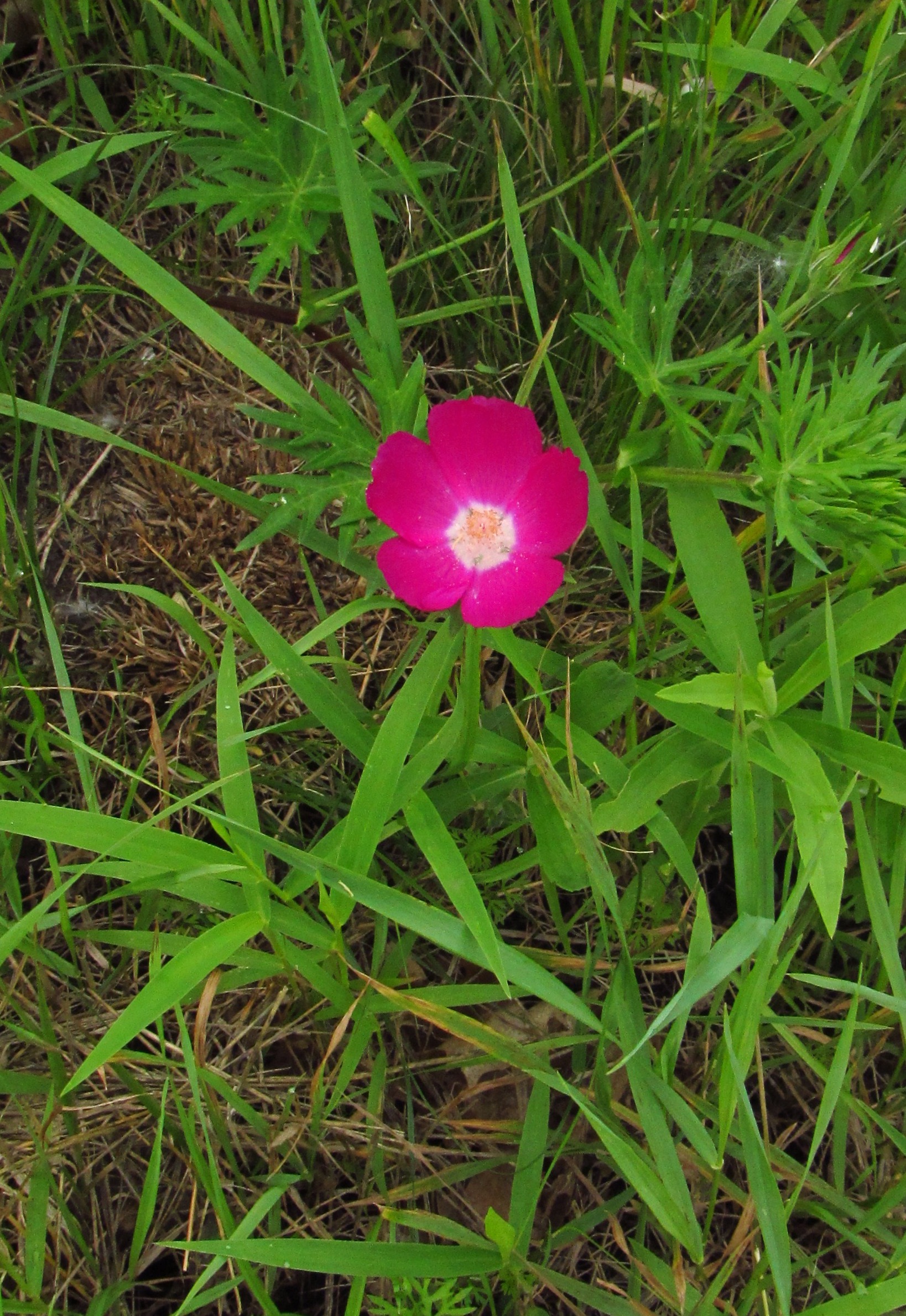 The yellow flowers are Missouri primrose, which are lower to the ground than the common evening primrose that blooms later in the summer. 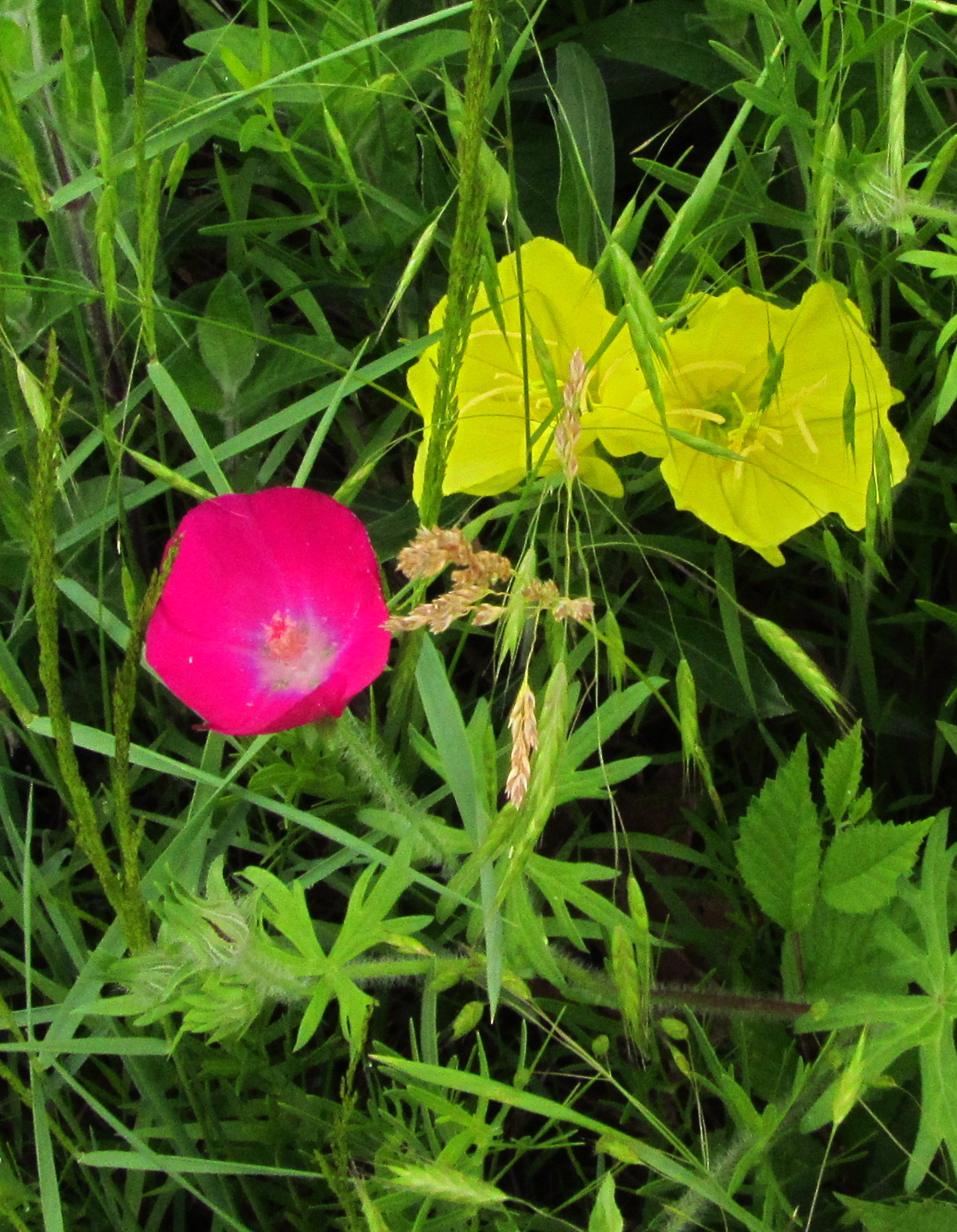 The bluish purple flower near the center of this picture is spiderwort. 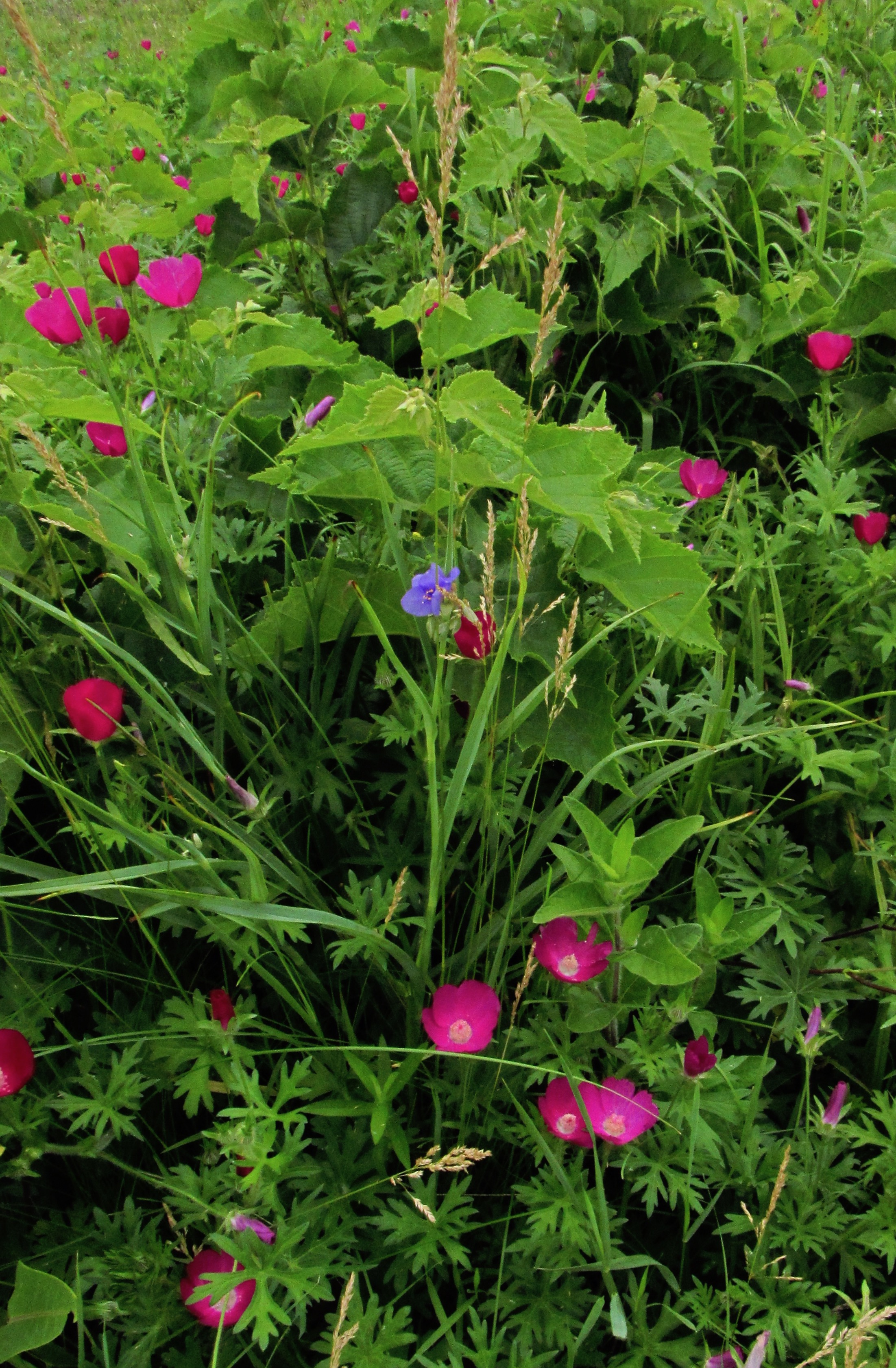 The white flowers in the foreground are beardtongue, also called penstemon. They are spring wildflowers, but were still blooming in early June. 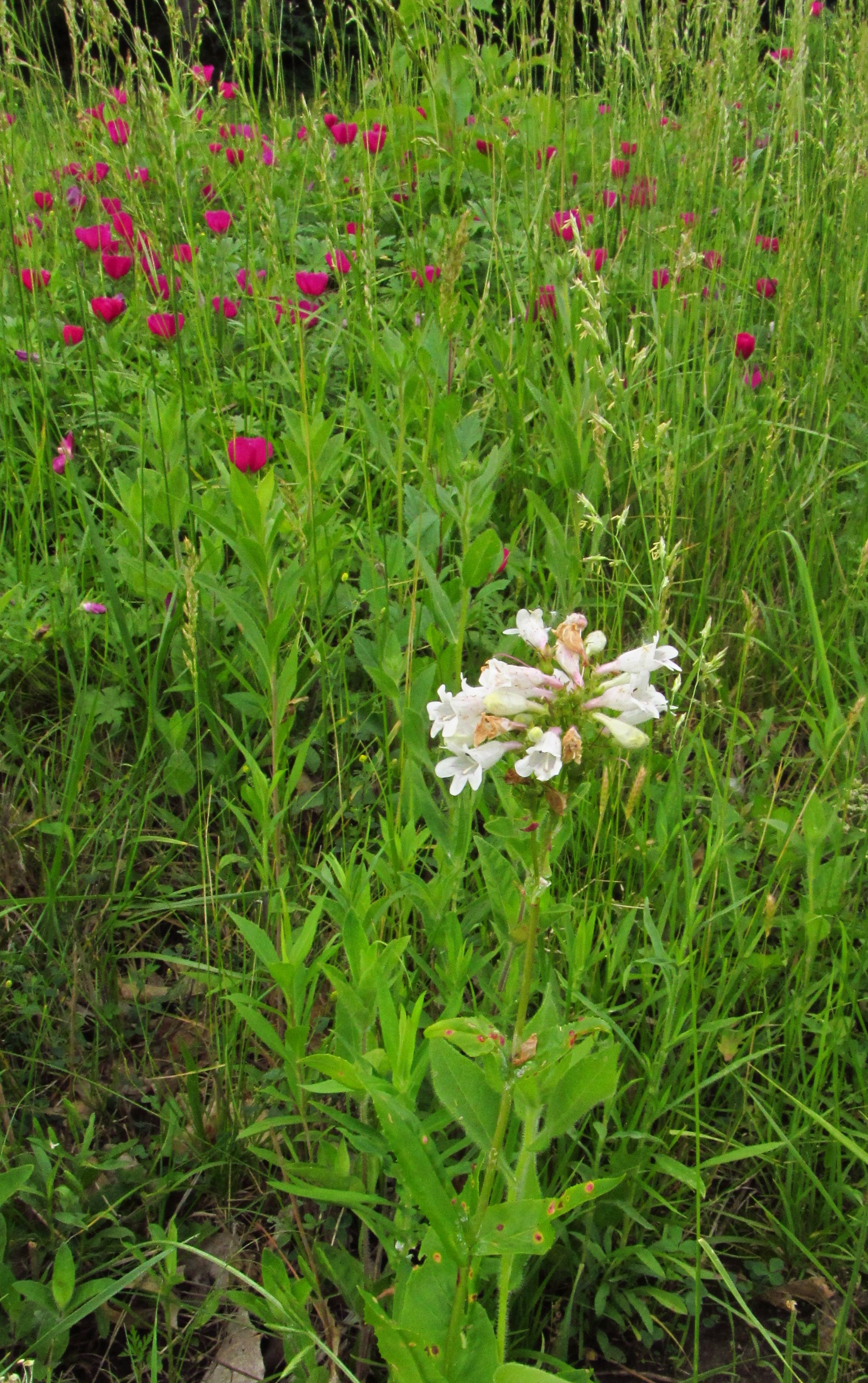 This common milkweed plant surrounded by purple poppy mallow was on the verge of blooming a few weeks ago. 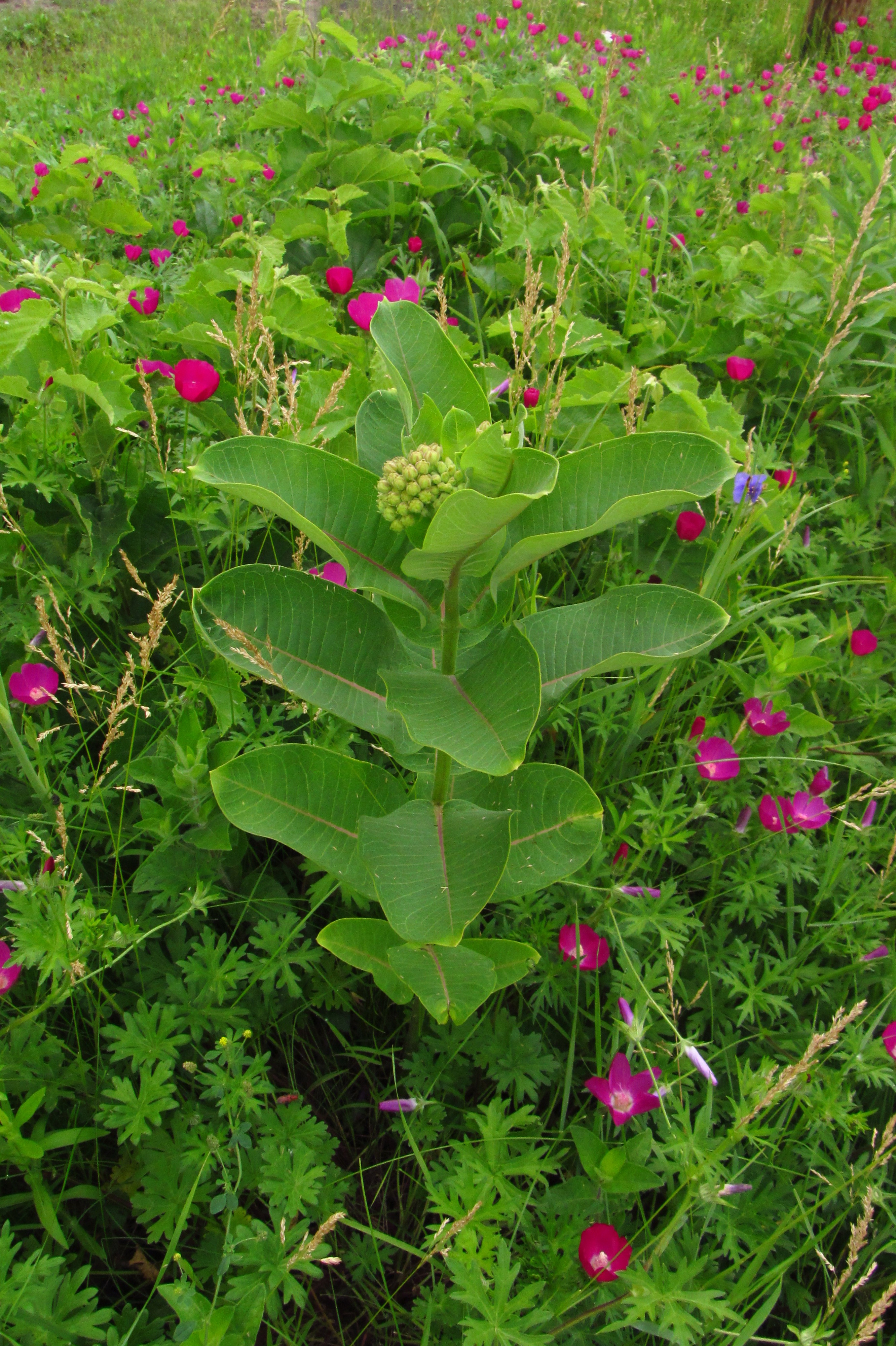 The lavender flower near the top of the frame is the native wild petunia, which will continue to bloom for much of the summer. The small yellow flowers are an invasive plant, birdsfoot trefoil. Near the purple poppy mallow flower, you can see round shapes that are fruit forming where blossoms on the same plant have come and gone. 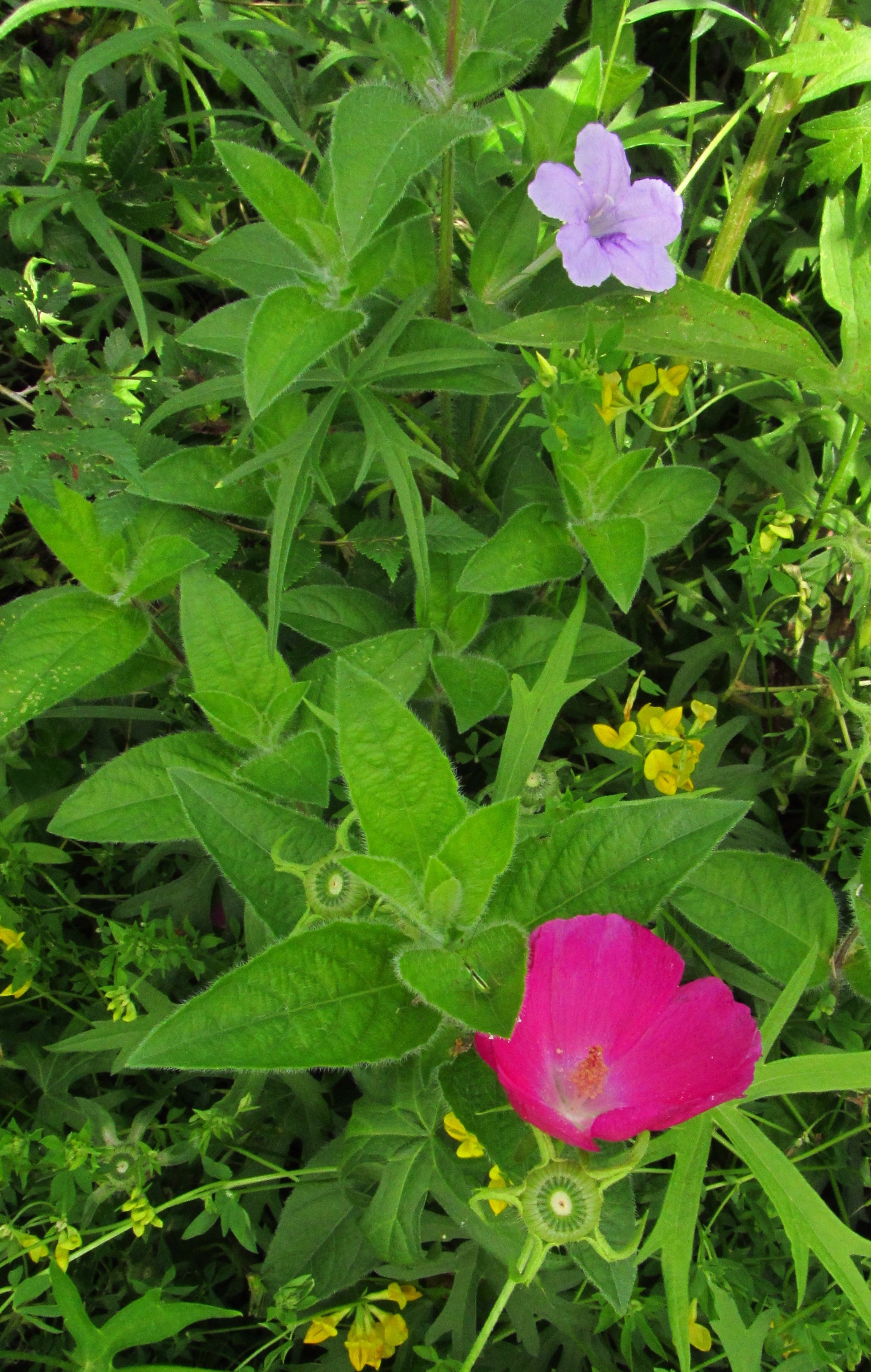 These purple poppy mallow plants have mostly gone to seed, but a couple of flowers were still blooming on June 27. 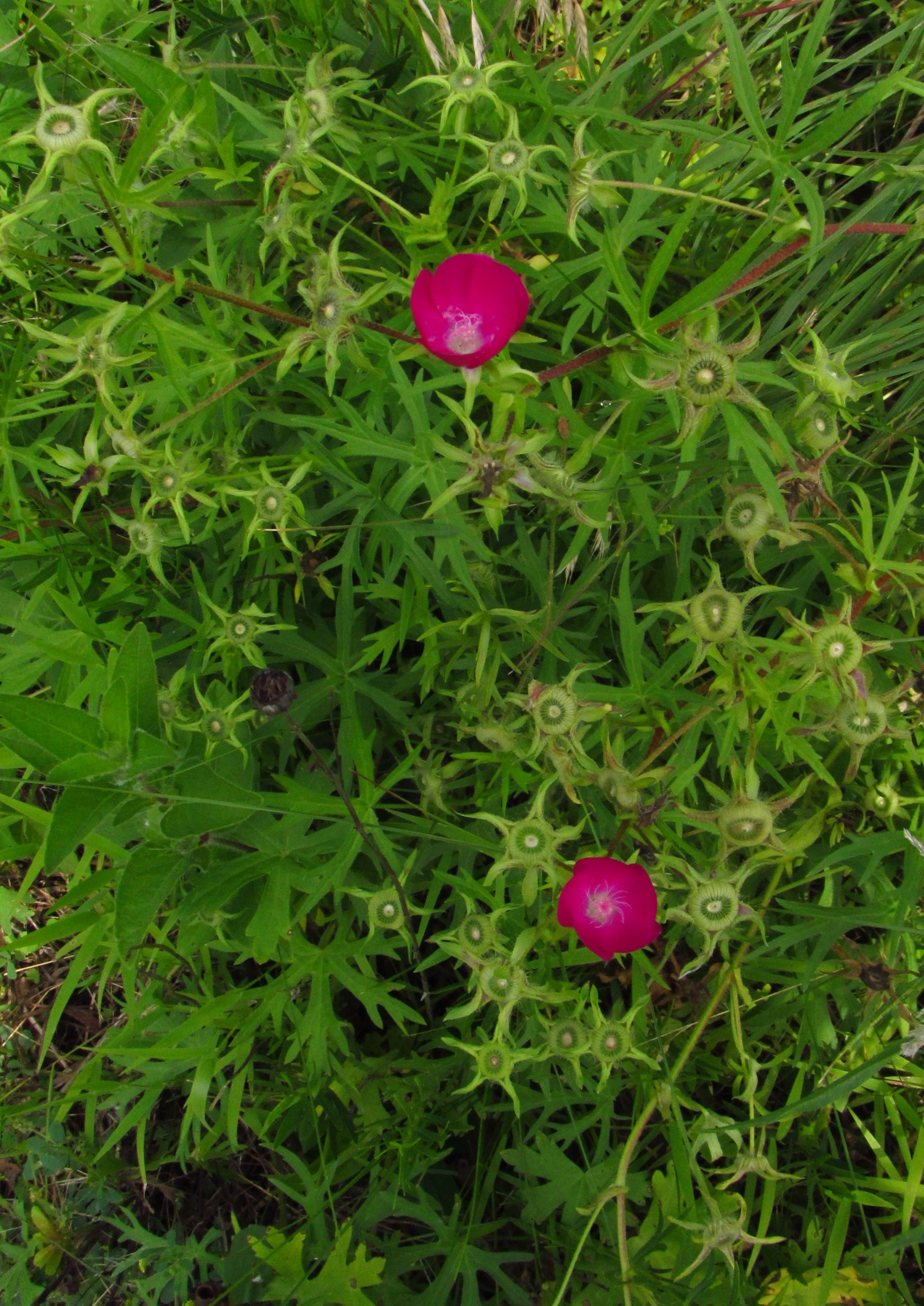