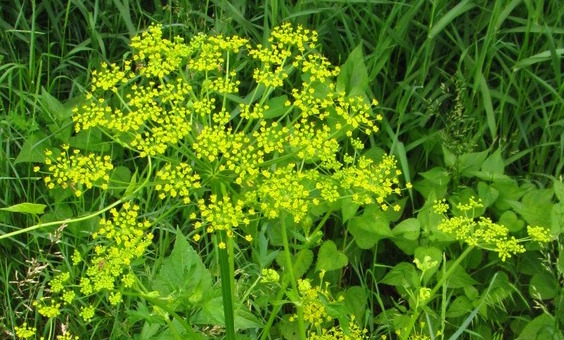 The Iowa Department of Natural Resources put out a warning this week about an invasive and poisonous plant that has become prevalent in the state.

Though not native to North America, wild parsnip (Pastinaca sativa) is has spread across most of our continent. I see massive stands near I-80 and I-35 on the west side of the Des Moines area, as well as along lots of country roads.

Many Iowans googling wild parsnip have landed on my post from last year about this plant and the notorious poison hemlock. On my way home from scoping out prairie wildflowers in Dallas County yesterday, I decided to take more pictures of the plant, along with other flowers you may see blooming close to it this time of year.

The Iowa DNR advises in its news release about dangerous plants,

Flowering from May to July, the non-native wild parsnip plant has lacy, yellow-green heads. If its oil touches the skin and then is exposed to sunlight, painful blisters will develop. It doesn't matter if the plant is flowering or not - avoid contact with it at all times.

Often found in great crowds in road ditches, avoid using a lawn string trimmer to remove it, as you’ll get splattered with broken parsnip tissue and have a high exposure to its toxin.

Like poison ivy, wash off as soon as possible after exposure. Prevention is also key here - wear long sleeves and pants, and avoid contact with the plant. Being able to identify wild parsnip is key to avoiding contact with it.

If you suspect you have brushed up against wild parsnip, take a shower and stay out of the sun for a while. The Wisconsin DNR's website warns of a wild parsnip rash, "Everyone can get it. Unlike poison ivy, you don't need to be sensitized by a prior exposure." Here's the scientific explanation:

There are chemicals in wild parsnip called psoralens (precisely, furocoumarins) that cause what dermatologists call "phyto-photo-dermatitis." That means an inflammation (itis) of the skin (derm) induced by a plant (phyto) with the help of sunlight (photo). When absorbed by skin, furocoumarins are energized by ultraviolet light (present during sunny and cloudy days) causing them to bind with nuclear DNA and cell membranes. This process destroys cells and skin tissue, though the reaction takes time to produce visible damage. [...]

In mild cases, affected skin reddens and feels sunburned. In more severe cases, the skin reddens first, then blisters rise – some are impressively large – and for a while the area feels like it has been scalded. Places where skin is most sensitive (arms, legs, torso, face, neck) are most vulnerable. Moisture from perspiration speeds the absorption of the psoralens. [...]

Blisters appear a day or two after sun exposure. Soon after blisters rupture and the skin begins to heal. One of wild parsnip's "signature" effects is a dark red or brownish discoloration of the skin in the area where the burn occurred. This hyper-pigmentation can persist in the skin for as long as two years.

Parsnip burns often appear as streaks and long spots. These reveal where a juicy leaf or stem drags across the skin, and is then exposed to the sun. Because of its surface resemblance to the effects of poison ivy, and because wild parsnip is so rarely accurately identified, it nearly always is diagnosed and treated as poison ivy.

This Canadian website provides some tips for removing wild parsnip growing on your property. The ideas may not be practical for large infestations, though.

A wild parsnip rash can cause "weeks of agony." In the worst cases, people splattered with sap may need to be hospitalized. I know two people who have suffered second-degree burns. One of them picked the plants, mistaking them for dill that had escaped from someone's garden. Today the wonderful Jill Beebout of Blue Gate Farm gave me permission to photograph the fresh dill plants she brought to the downtown Des Moines farmers market:

As you can see, wild parsnip looks similar:

I took most of the pictures below along one roughly mile-long stretch of gravel road in Dallas County. The wild parsnip was thriving on both the side that has full sun all day long and on the side that is shaded during the afternoon. Let's look at the sunny side first: a large group of hoary vervain plants growing near wild parsnip.

Blue vervain and wild parsnip in front of a cornfield:

Wild grapevine intertwined with wild parsnip, in front of common milkweed and rows of corn:

Moving to the shady side of the same road, two shots of wild parsnip with American bellflower, one of my all-time favorites:

Wild parsnip with some kind of white aster (various species are difficult to distinguish). UPDATE: Iowa naturalist Leland Searles thinks the white flowers look like Daisy fleabane (Erigeron annuus), "a relative of asters" but not an aster.

Elderflowers are blooming in the background here:

Foliage for ragweed, which will bloom later this summer, in front of wild parsnip, with a large elderberry bush in the background:

According to John Pearson of the Iowa DNR, these pink flowers are likely some kind of hedge nettle; three related species are all native to Iowa.

I took these last two pictures near a different Dallas County road yesterday. Here's wild parsnip with Queen Anne's lace (wild carrot), another European native that has become naturalized across the U.S.:

UPDATE: A commenter asks if the roots of wild parsnips are edible. The answer is yes. I would not want to get close enough to these plants to dig up the roots. However, the Emergency Outdoors blogger writes,

Most wild foods which share their name with a cultivated plant are significantly different from it. Wild plum, wild grape, wild cherry, wild rice, wild ginger, wild leek, and many others come to mind. The wild parsnip, however, is like wild asparagus in this respect: it is identical to its cultivated counterpart because it is descended directly from it, and nothing different needs to be said about its identification or use in the kitchen. If you know parsnips, you know wild parsnips.

Many rural folks, who know the wild parsnip only as a tenacious weed that cows don’t eat and humans avoid, are shocked to hear that the plant is edible, while I am shocked that more people do not take advantage of this free produce. A large portion of the readers will find this plant in their own fields or fence-rows, or in those of a friendly neighbor who would be glad to have them removed. Parsnip is one of the most abundant weeds of the farm country of the Midwest, Northeast, and parts of eastern Canada, and it is also found scattered in agricultural areas of the West. I commonly see patches covering an acre or more in a nearly pure stand, producing more than a family could want. If you like parsnips, you may never have to grow them again. And if you haven’t tried this vegetable, you might want to take advantage of this perennial opportunity.