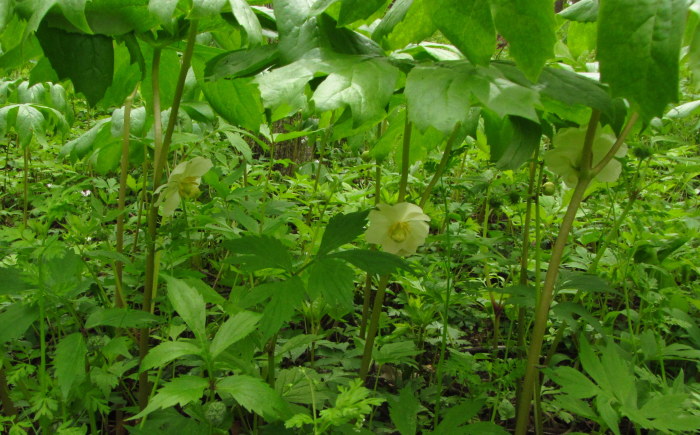 After focusing on one of the most detestable flowering plants found in Iowa woodlands last week, I'm pleased to showcase one of my favorites today. Mayapple (Podophyllum peltatum) is native to most of the U.S. and Canada east of the Rocky Mountains. Its other common name is umbrella plant, for obvious reasons when you see the large leaves spreading over the flowers.

The Illinois Wildflowers website notes that Mayapple thrives in "dappled sunlight to light shade, moist to slightly dry conditions, and a rich loamy soil with abundant organic matter. This plant is easy to start from rhizomes and it will readily adapt to garden areas near deciduous trees. It is a strong colonizer and may spread aggressively in some situations."

I've never seen a lone Mayapple plant in the woods, or even a small colony. They tend to appear in large groups. I took all of the photos enclosed below in Windsor Heights.

Occasional Bleeding Heartland guest author Katie Byerly has a YouTube channel as "Iowa Prairie Girl" and recently posted a video about Mayapples. It's worth your time:

In central Iowa, I usually see the first signs of Mayapples in April, occasionally in March if we have an early spring. 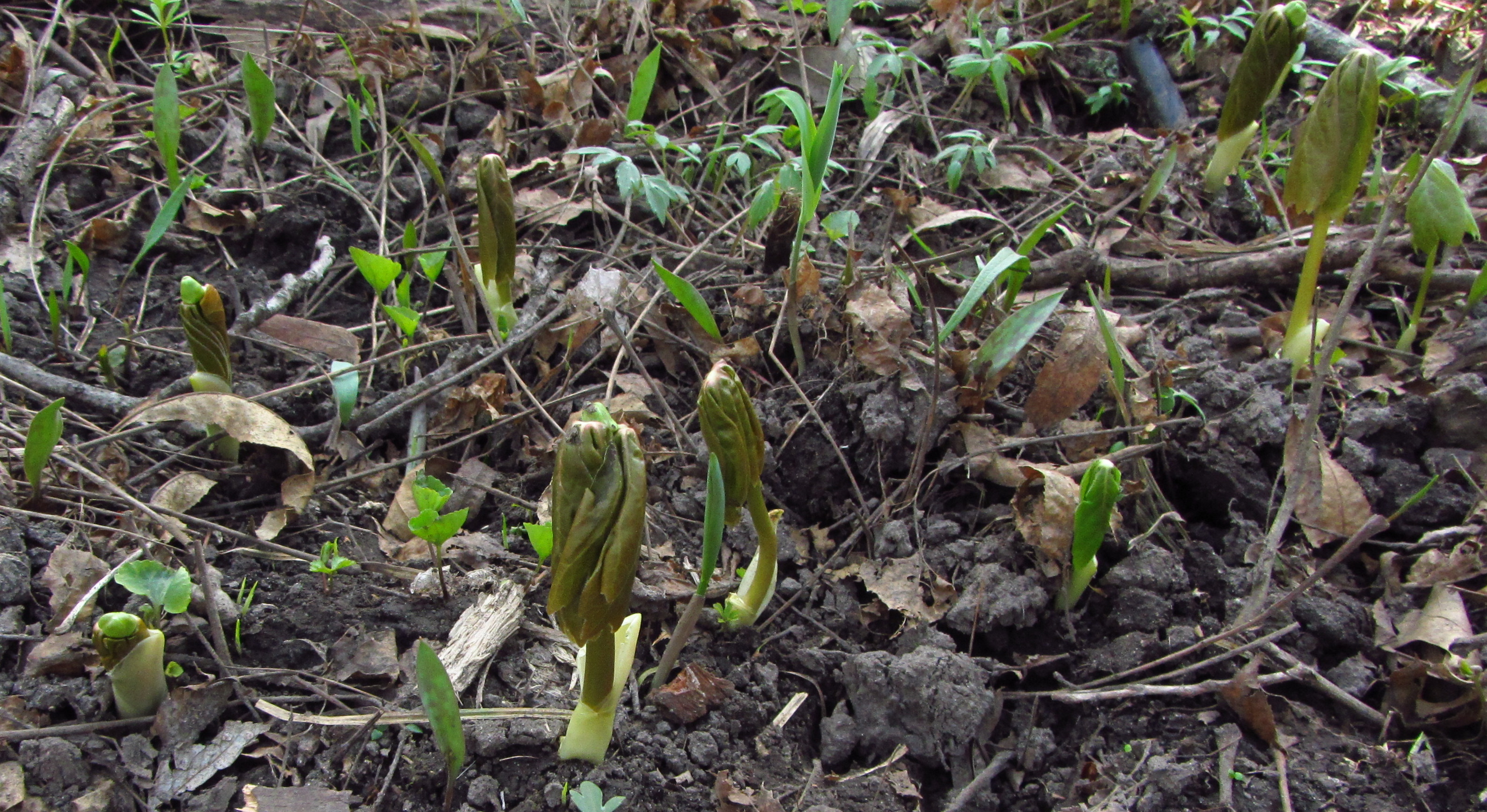 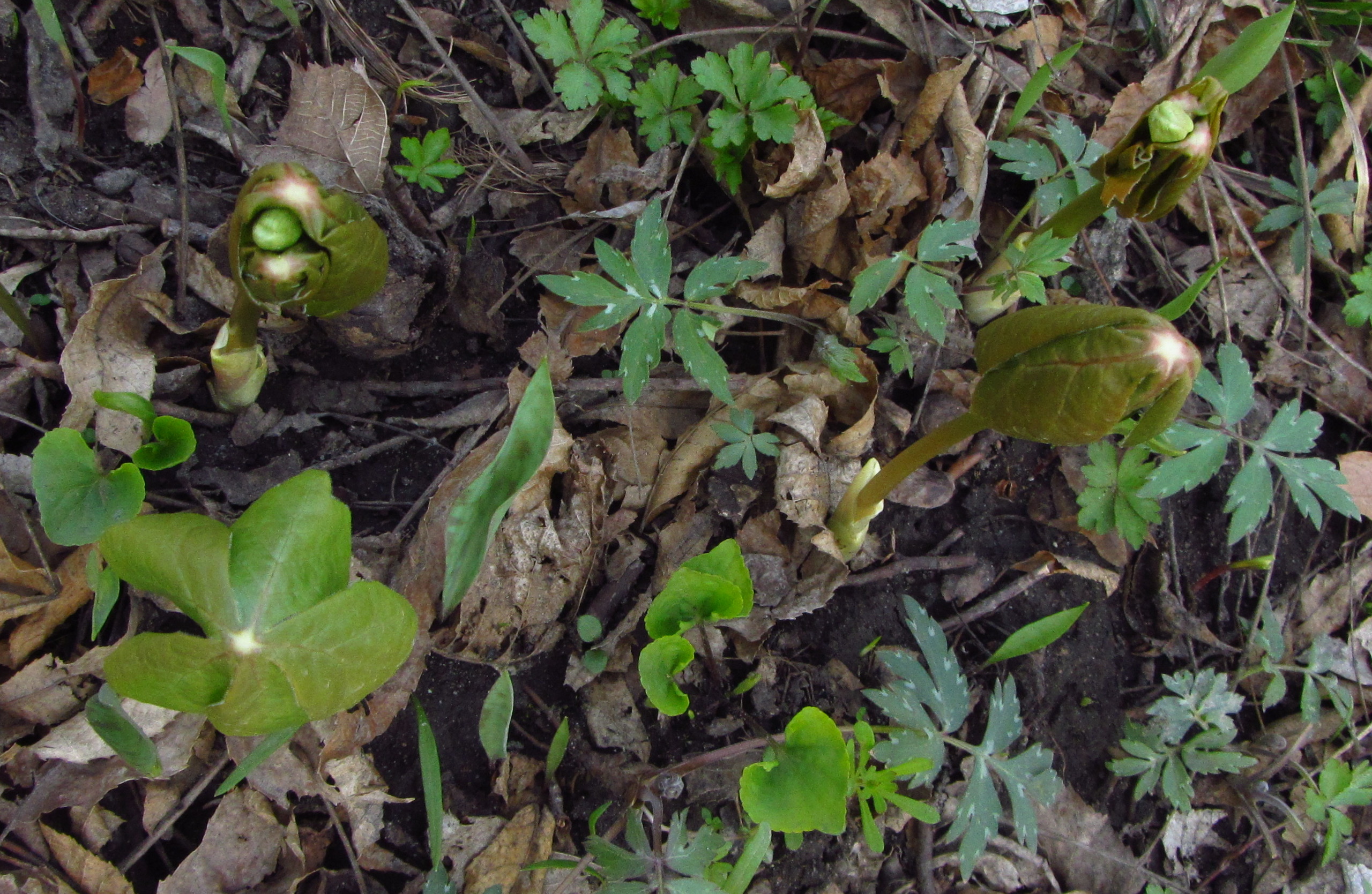 Soon the leaves start to unfurl, forming the umbrella shape. 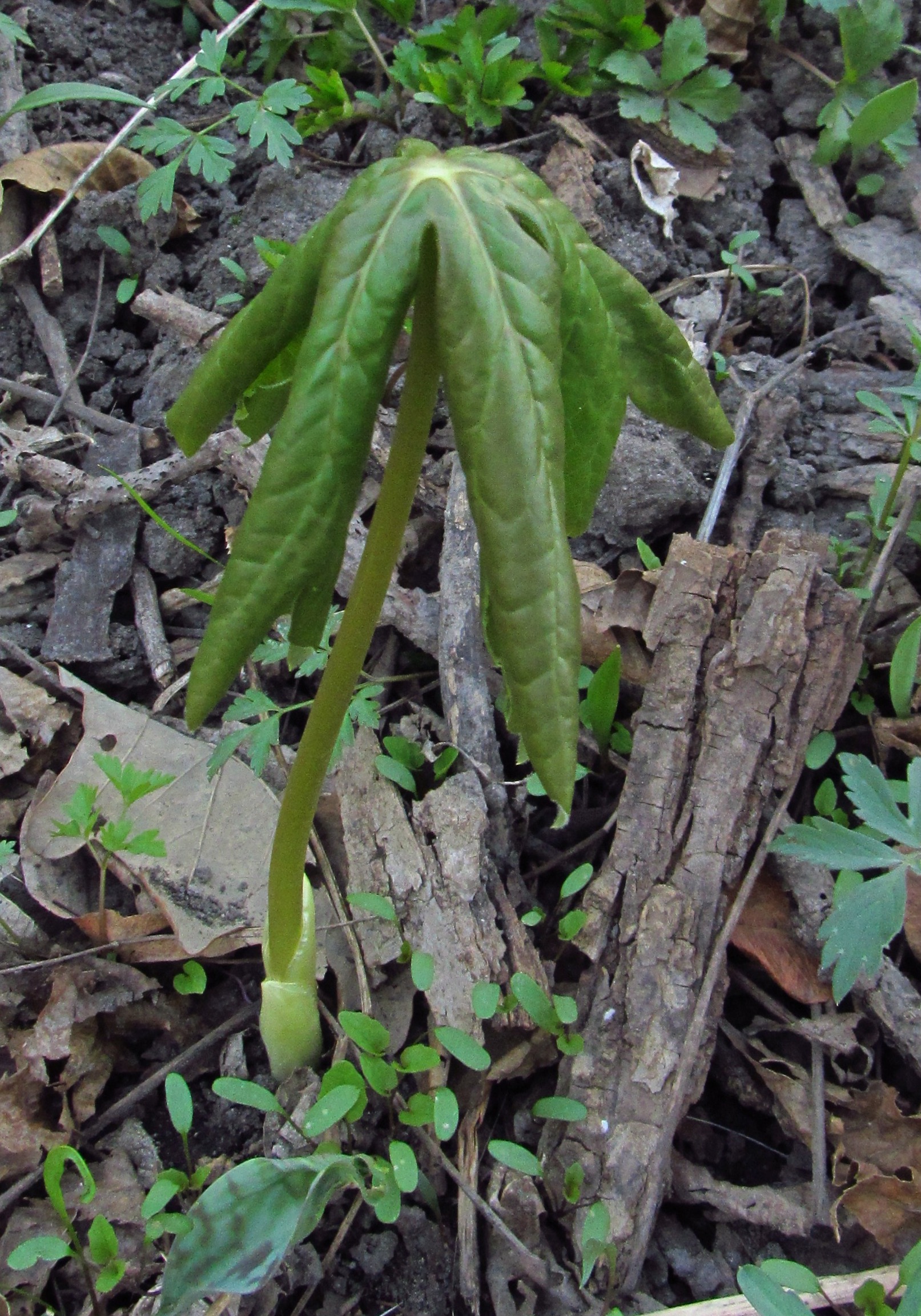 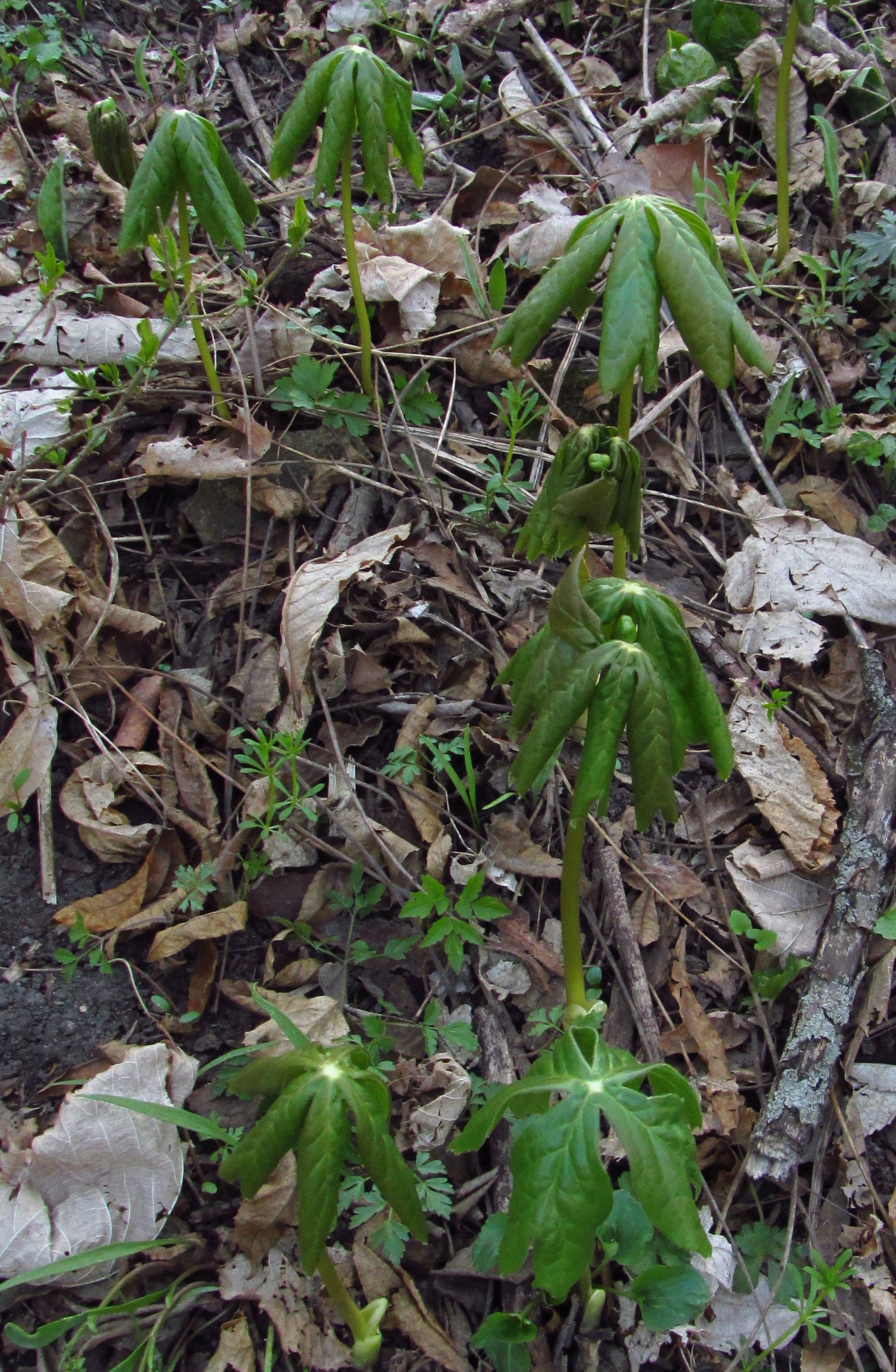 Plants that will not flower have a single leaf, as pictured on the left here. On the right, you can see a plant with two leaves, which will flower. The bud is forming where the stalk splits into a "Y" shape. 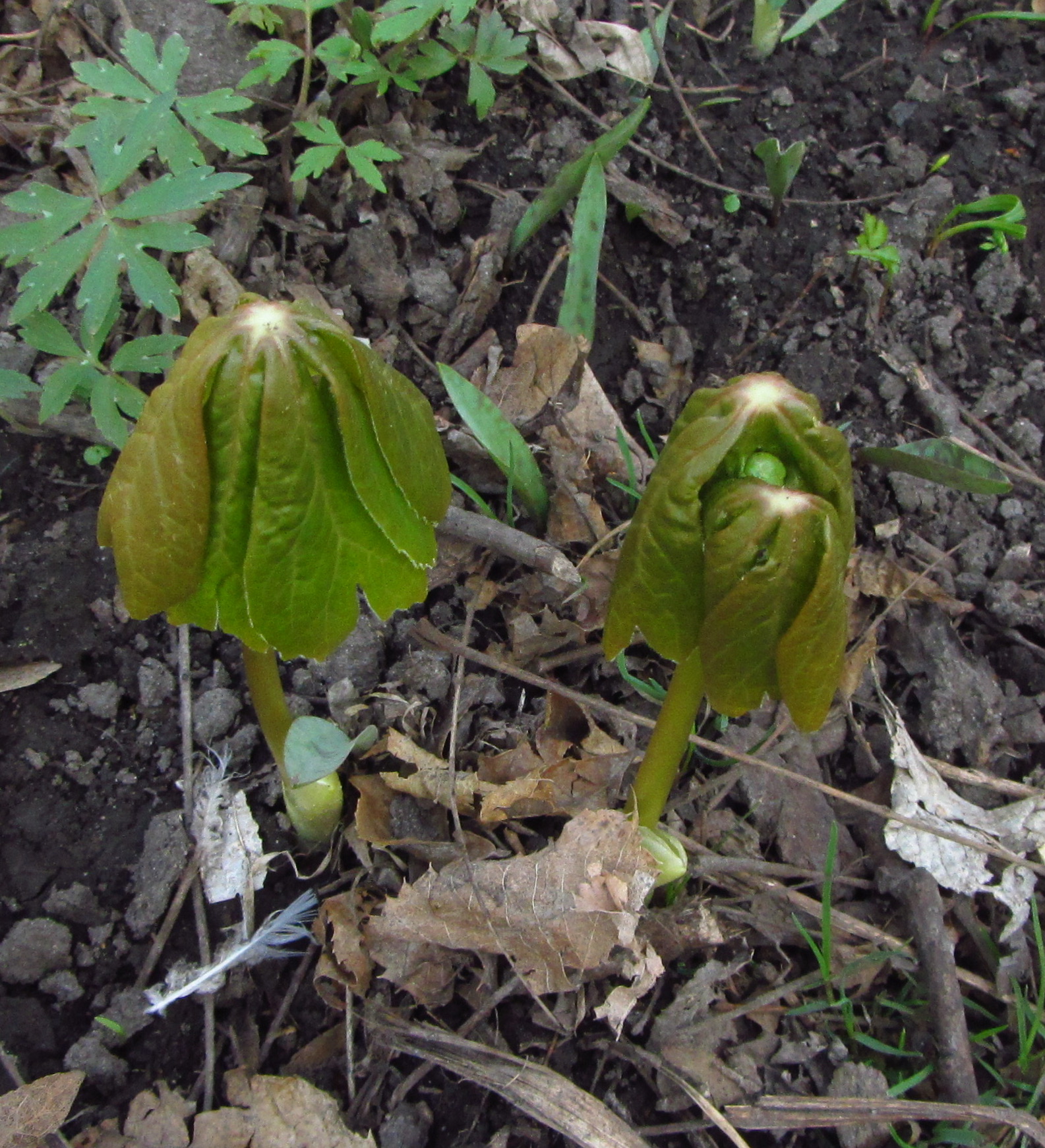 Typically Mayapples bloom in May in central Iowa, but some years they will start flowering in April. Flowers are starting to open here. Close to the ground, you can see lots of spring beauty plants, mostly with closed blossoms. 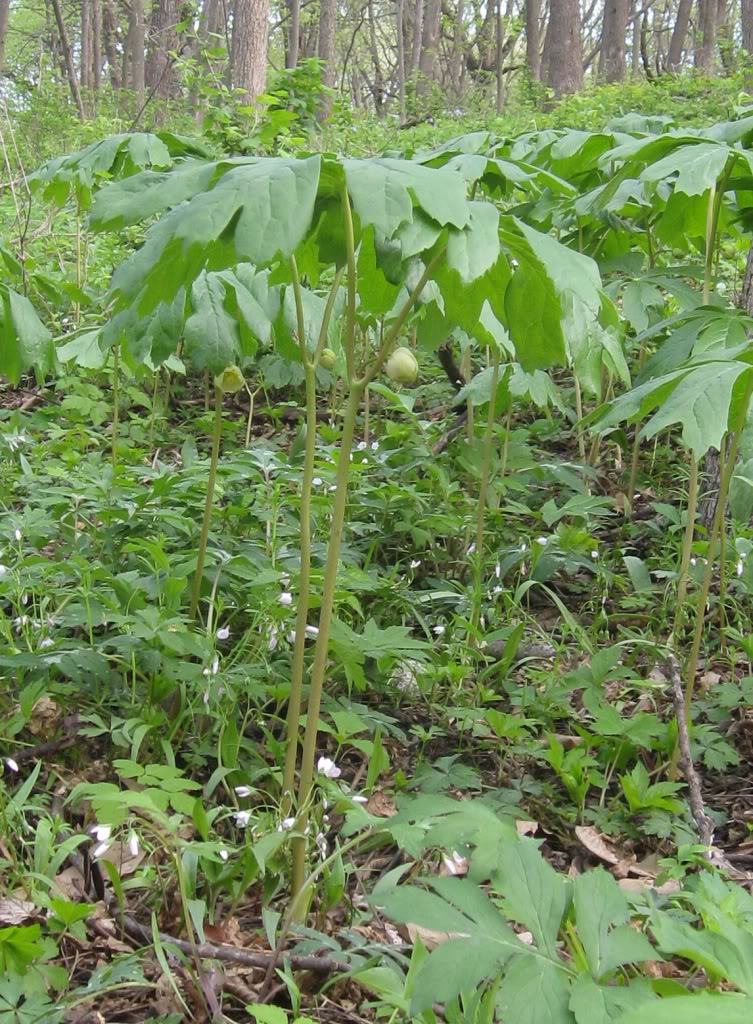 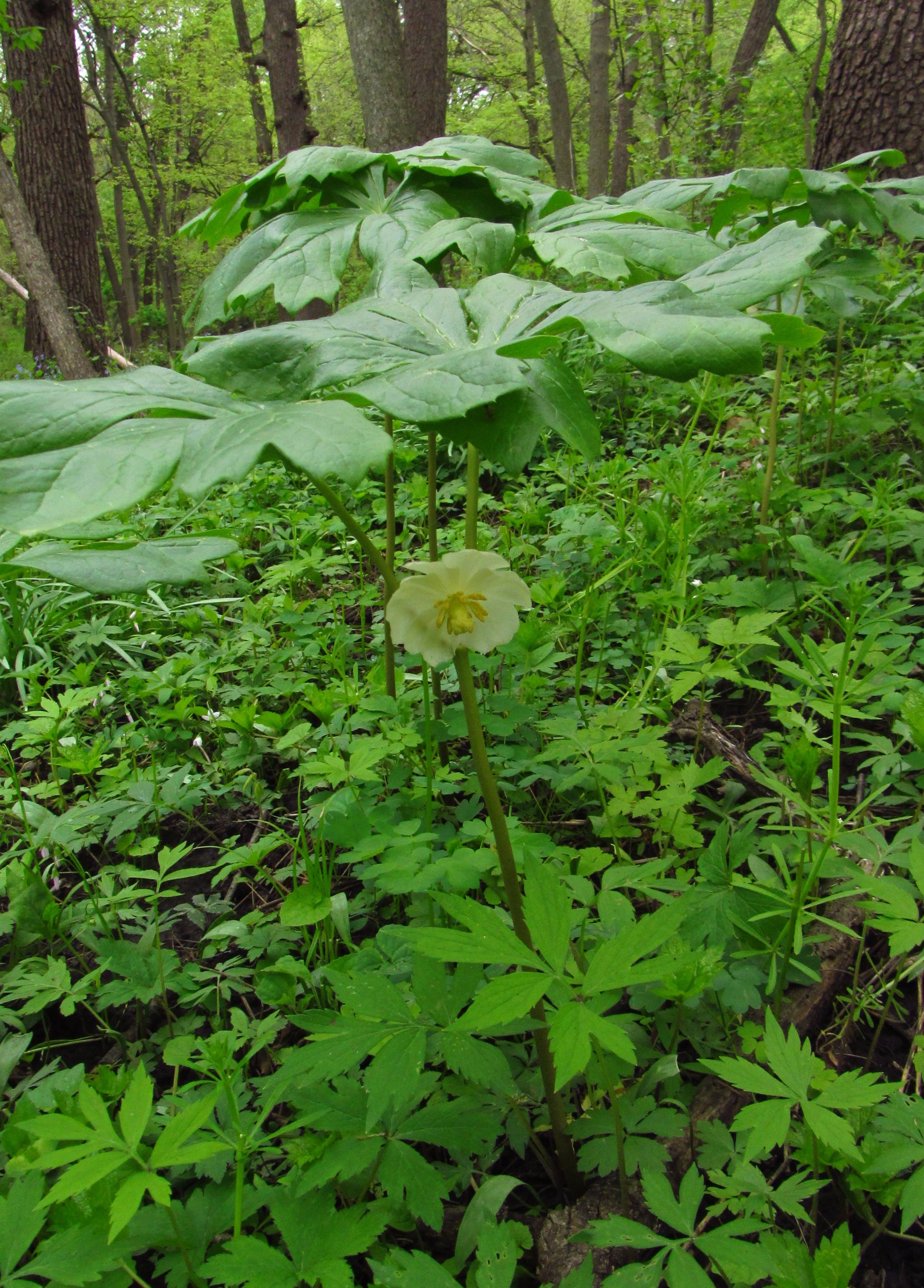 Side, front, and rear view of Mayapple flowers: 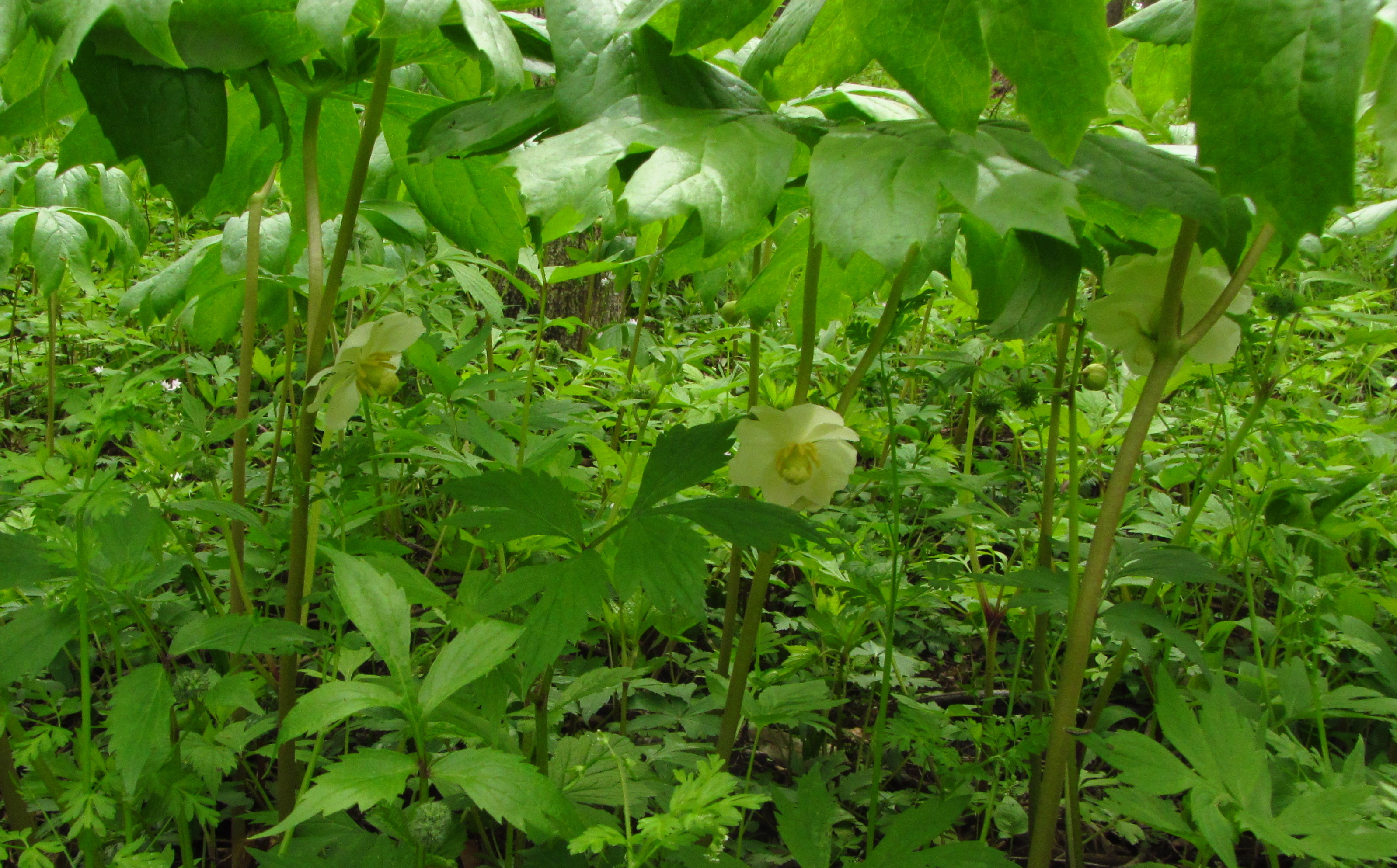 Some foliage for "Aunt Lucy" is visible here. 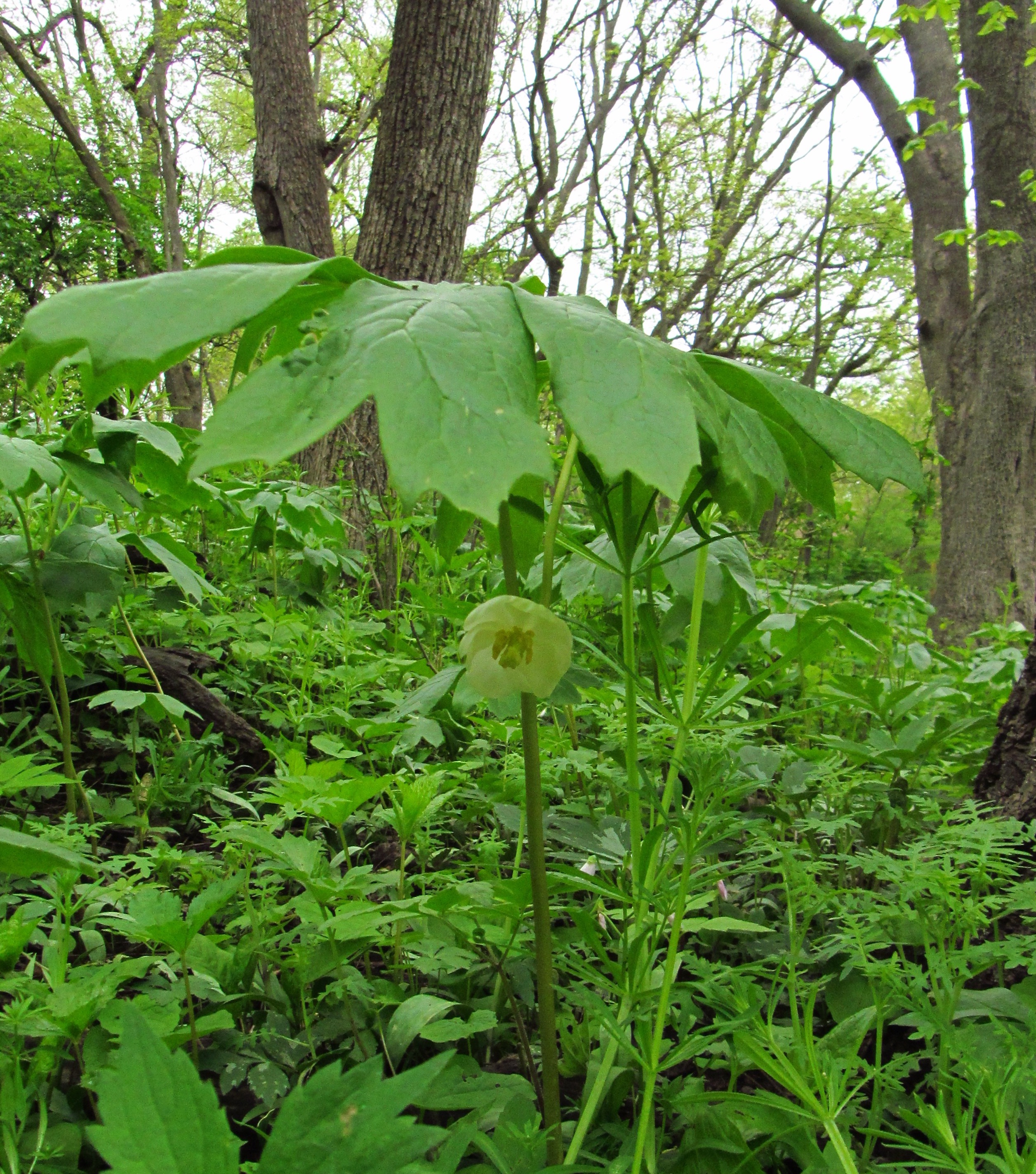 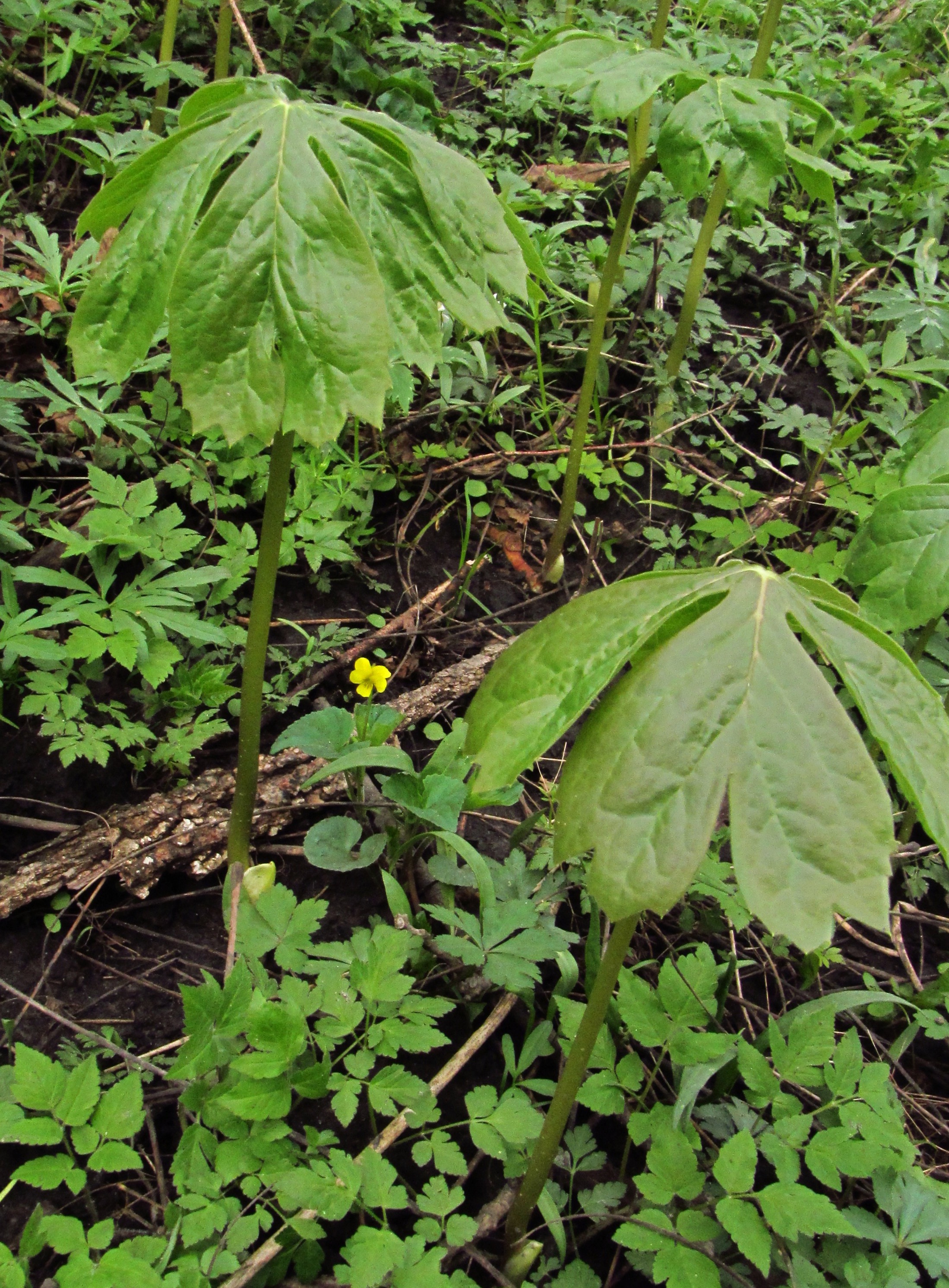 According to the Minnesota Wildflowers site, Mayapple leaves are "palmately lobed in 5 to 9 parts." In this shot, you can see leaves with six and seven lobes. 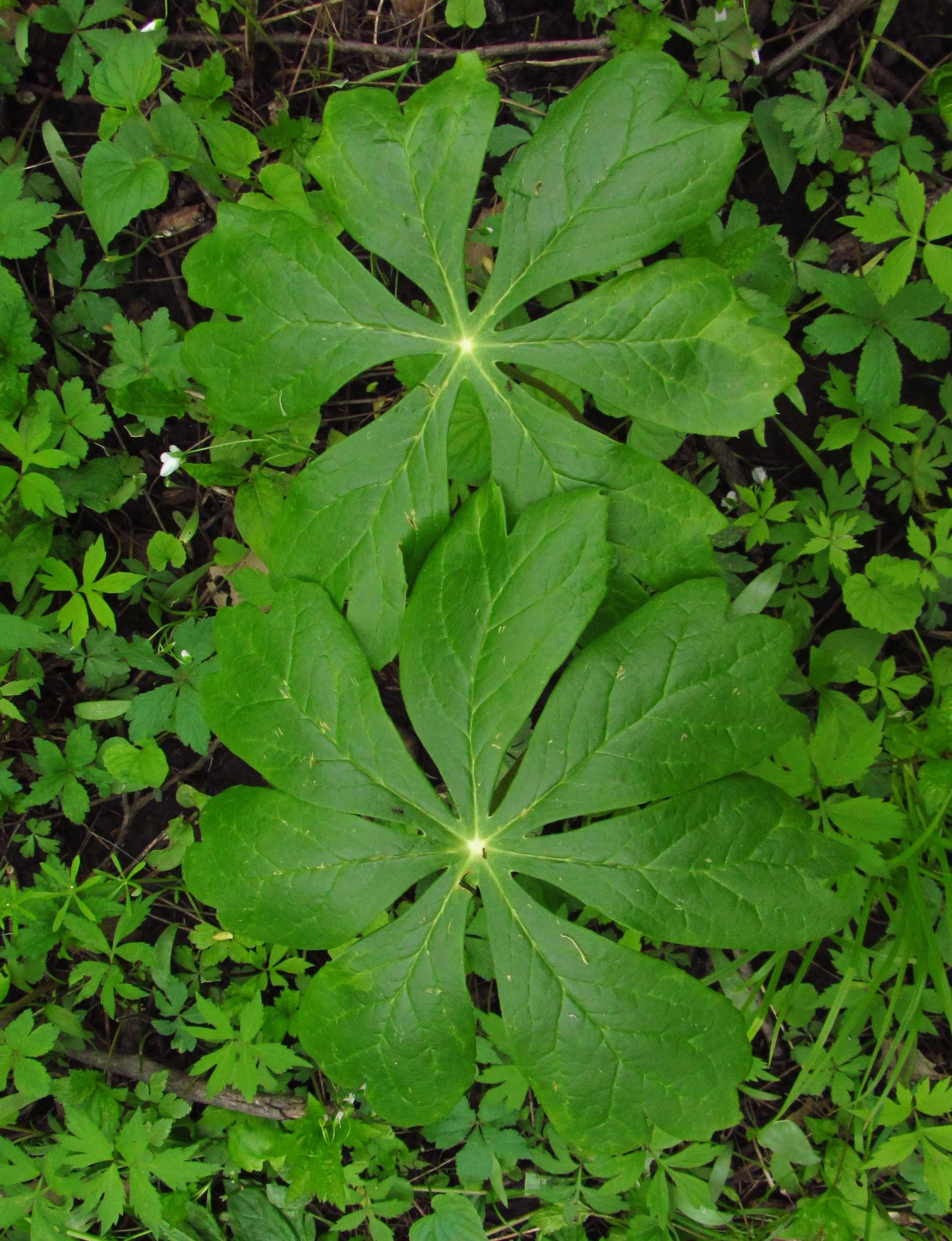 This year my son spotted one unusual plant with a four-lobed leaf. 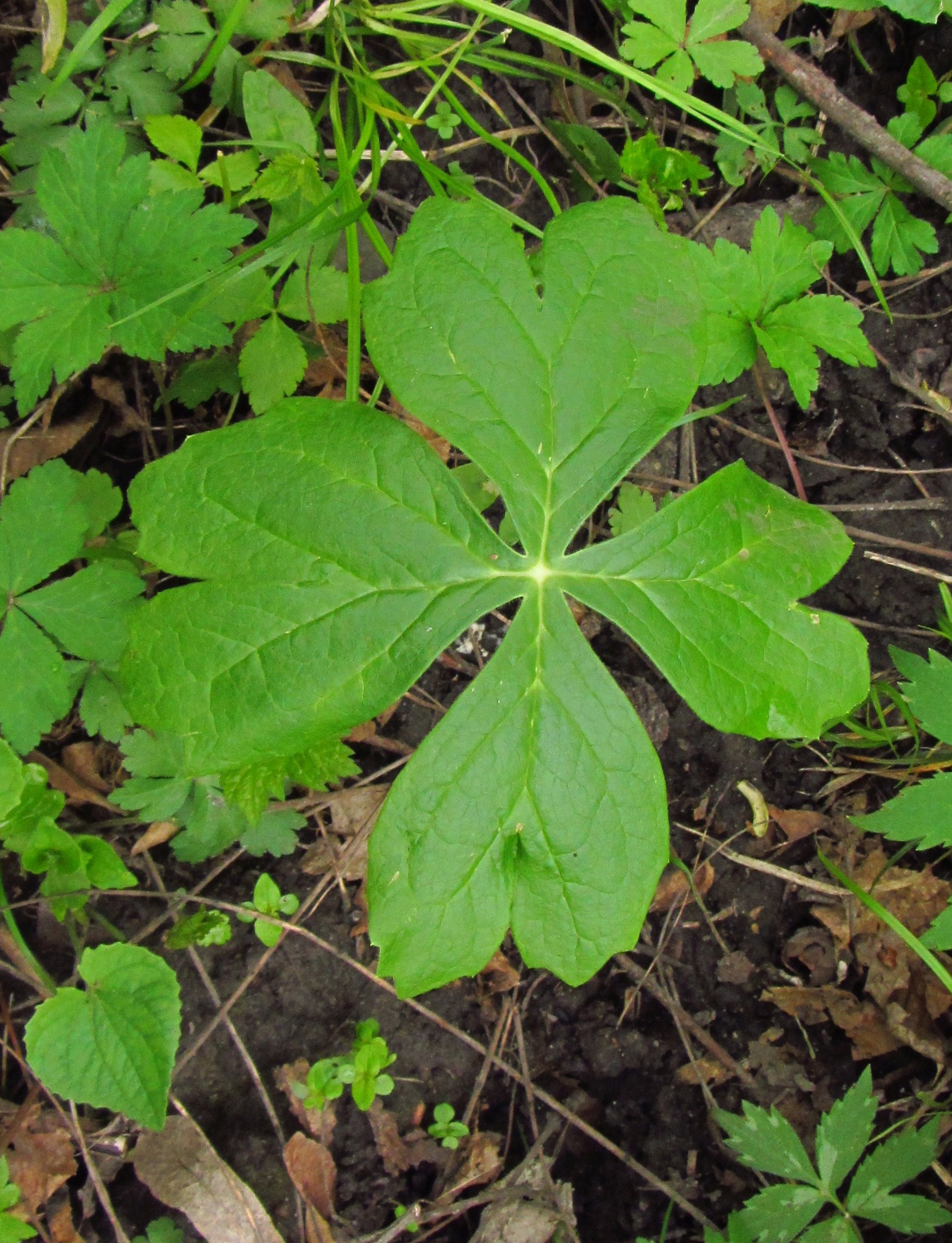 Large colonies of Mayapples and Virginia bluebells coexist near our home. The bluebells bloom first. 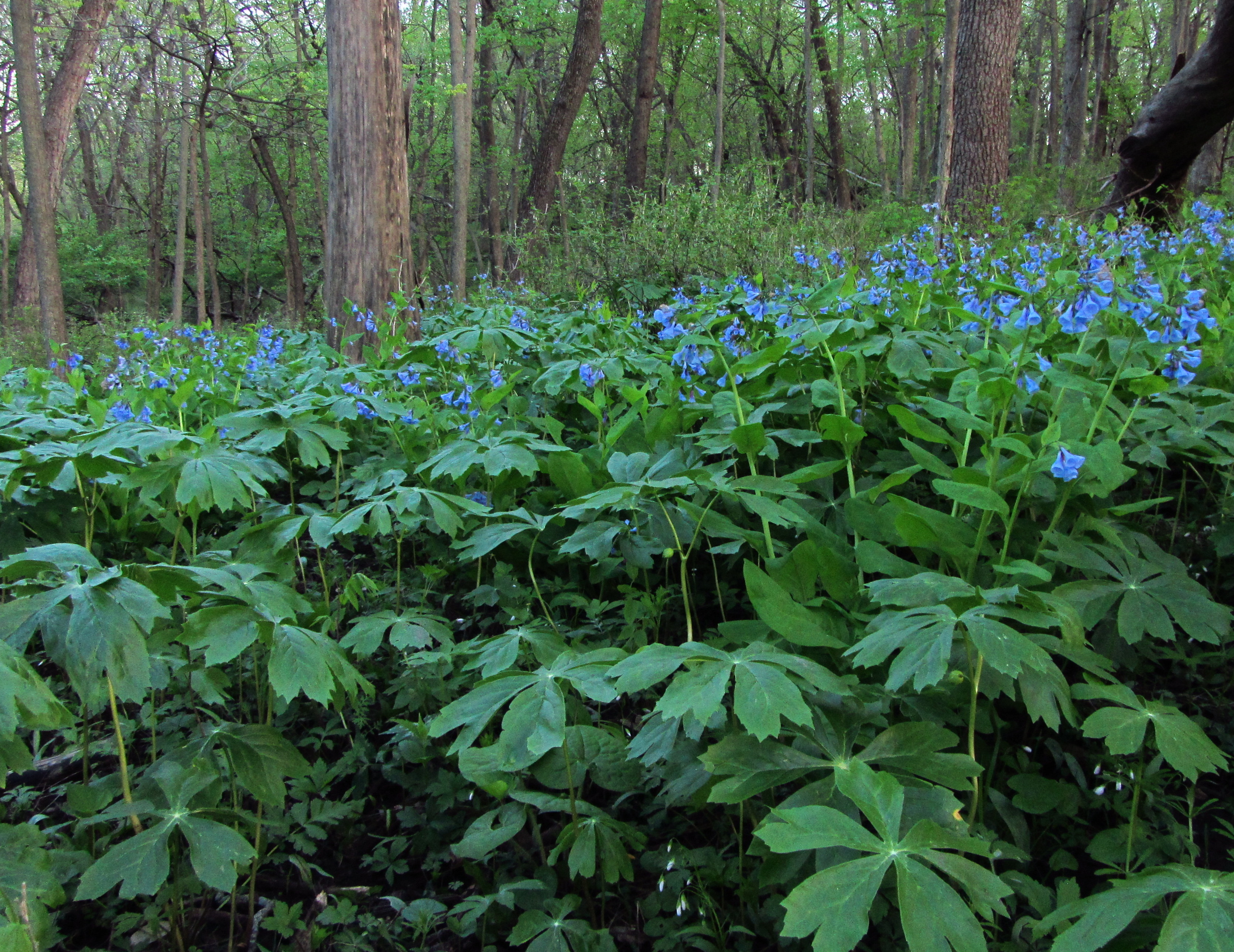 Some bluebell plants were past their prime by the time this year's Mayapple flowers appeared. 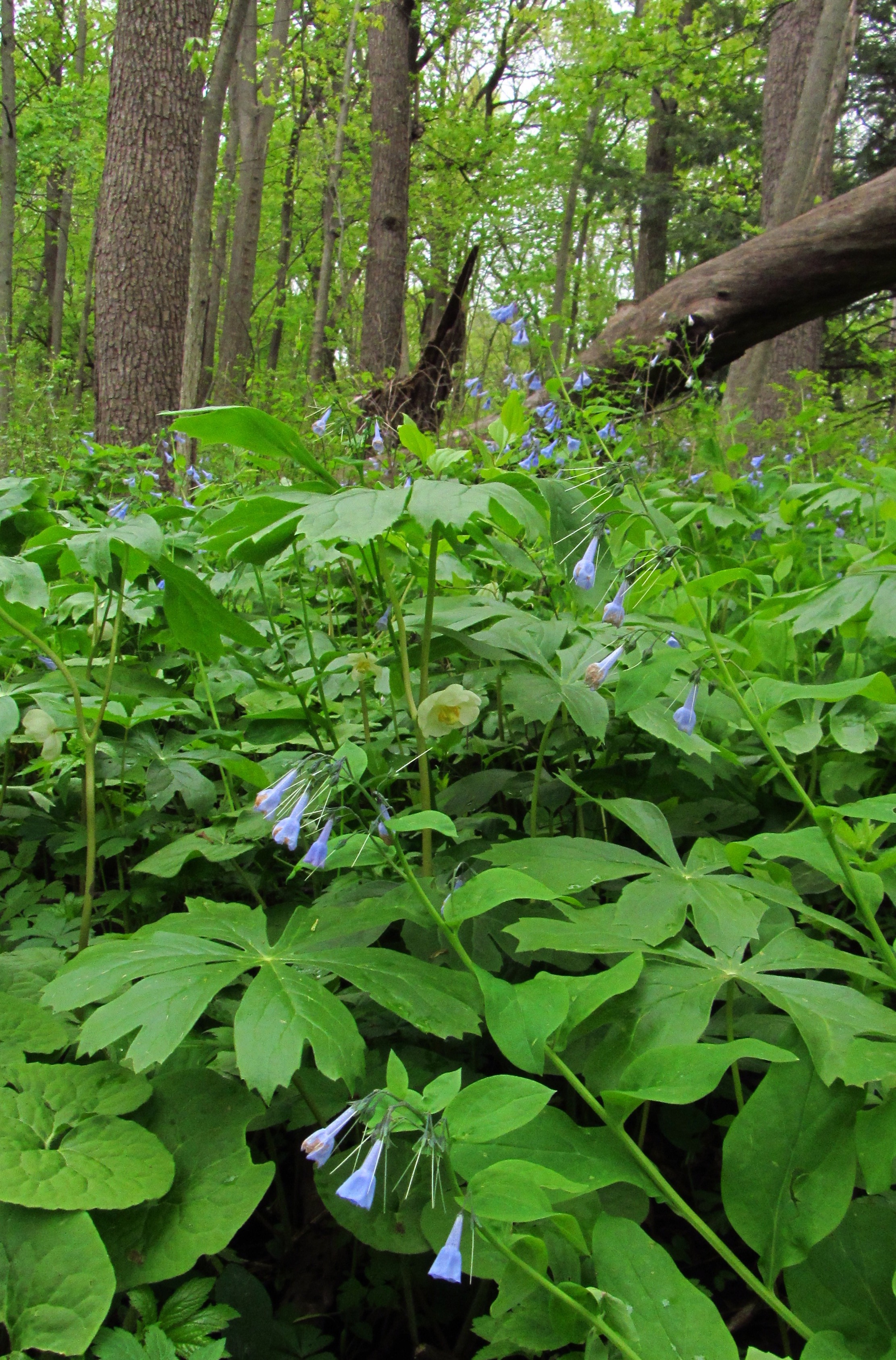 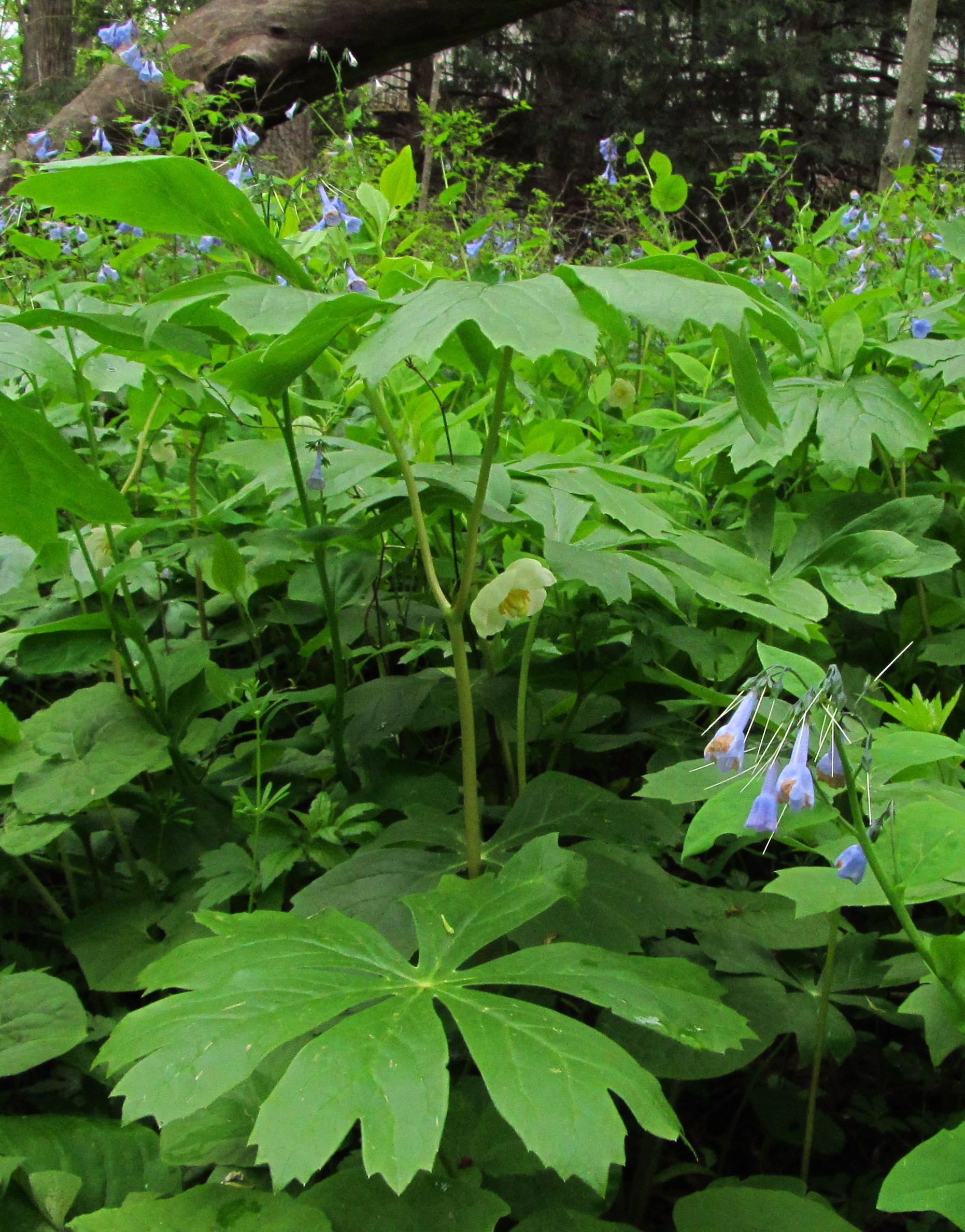 That's sweet Cicely blooming in front of these Mayapples. Near the lower left, you can see more spring beauty plants. 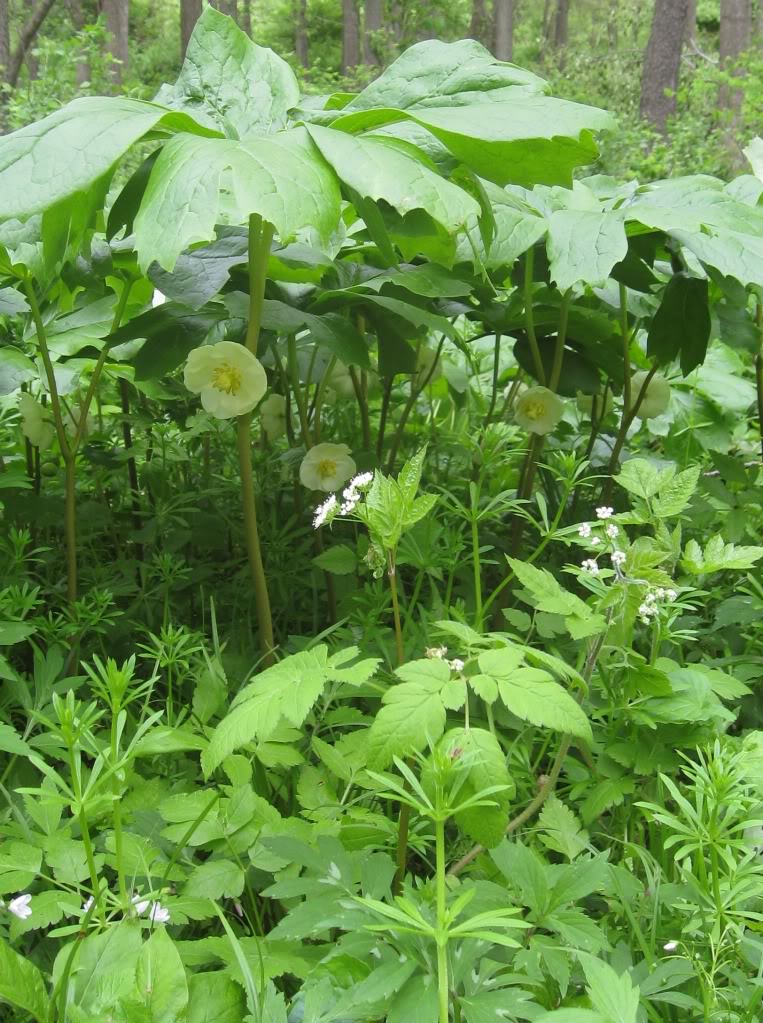 The purple flowers near the center are sweet William/wild blue phlox. 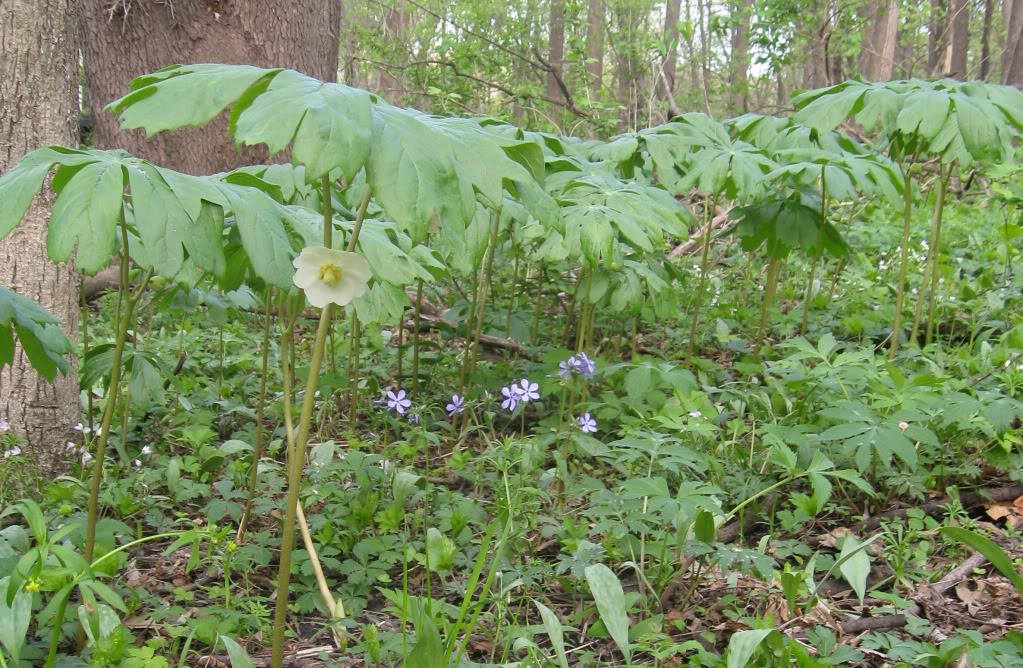 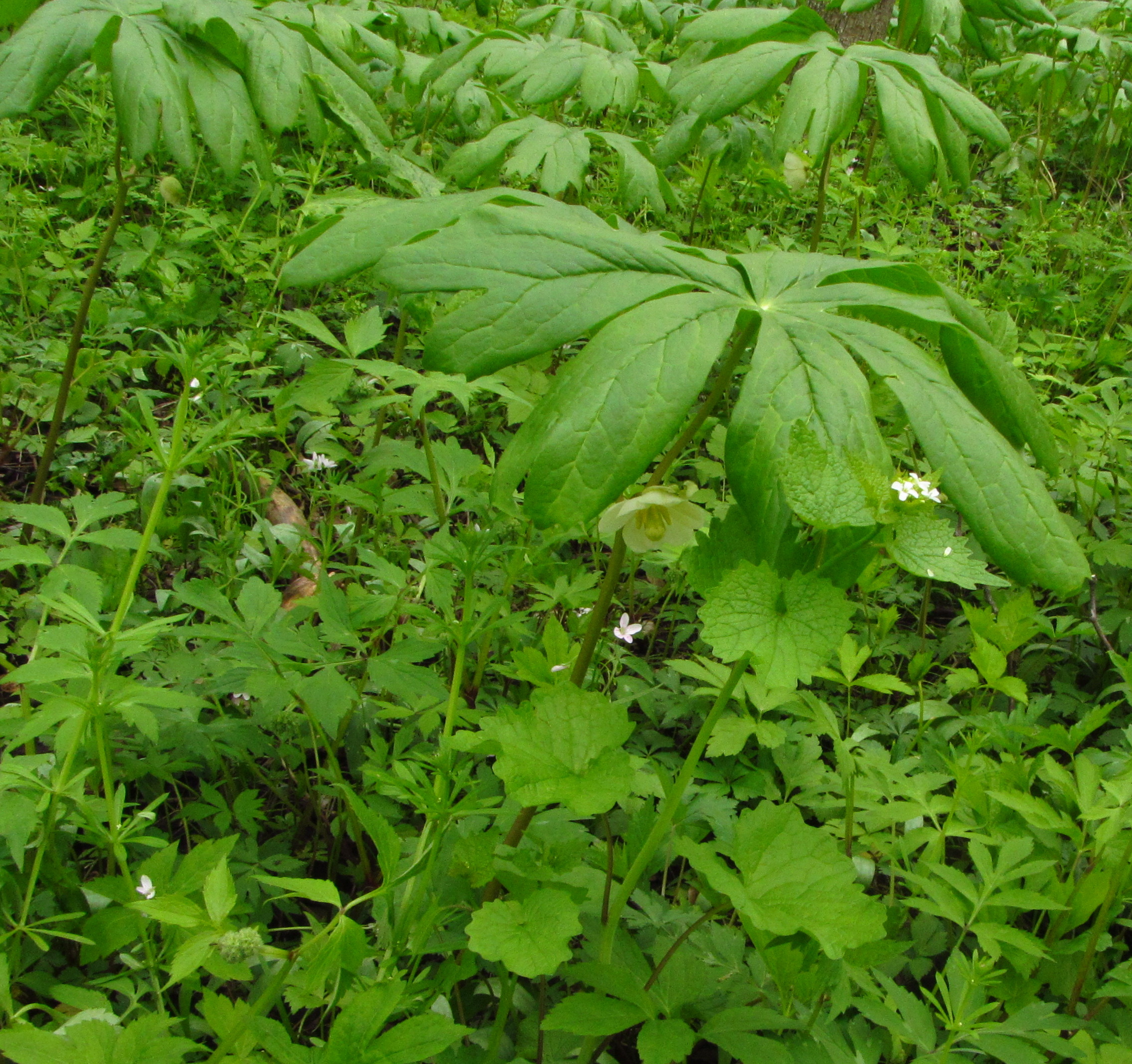 Finally, several shots of fruit forming. Some people make jam out of the fruit, but I've never attempted to harvest them. Deer seem to like the little apples. If you want to try the fruit, be careful--this forager became ill from eating raw Mayapples with seeds. 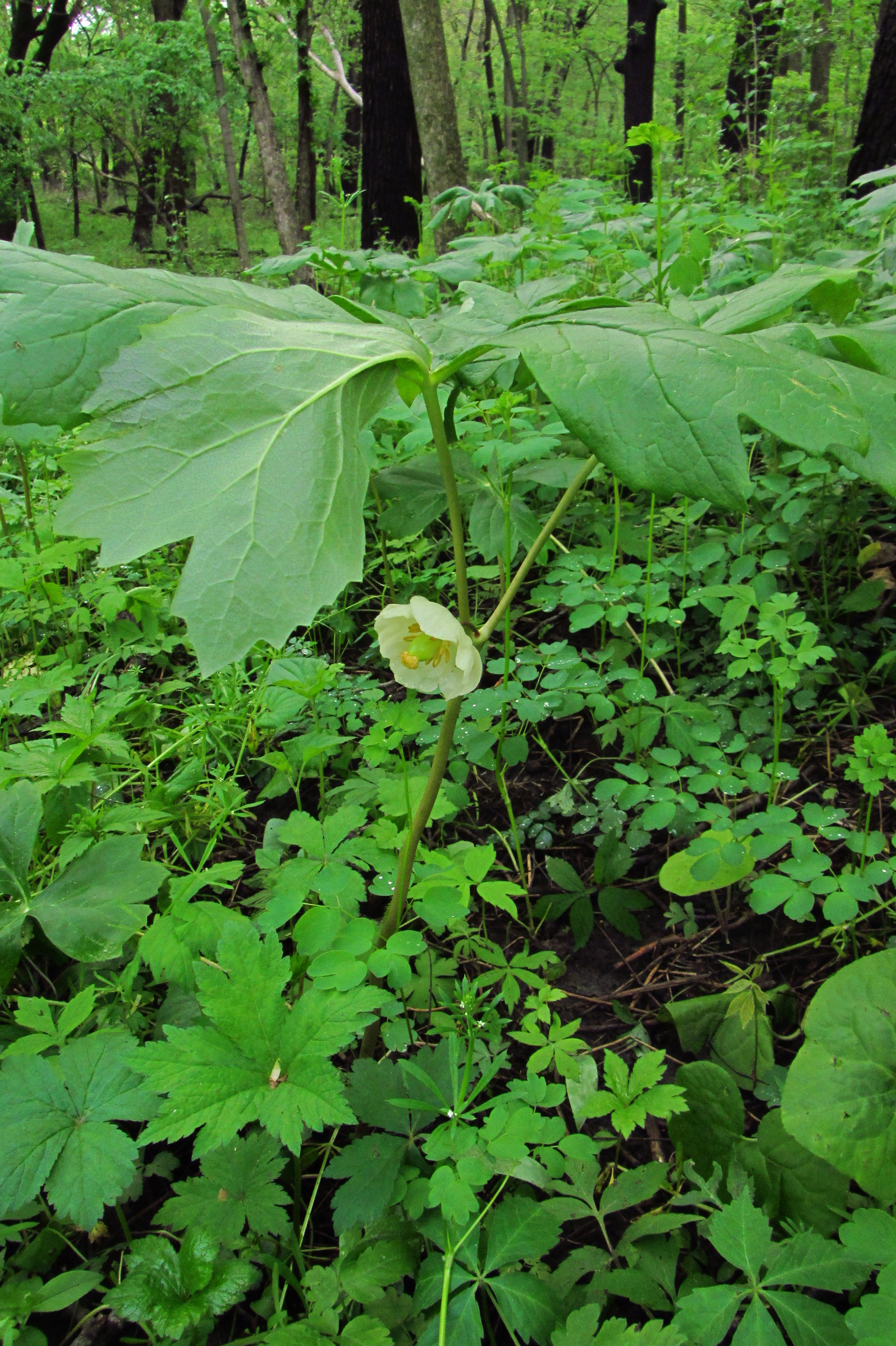 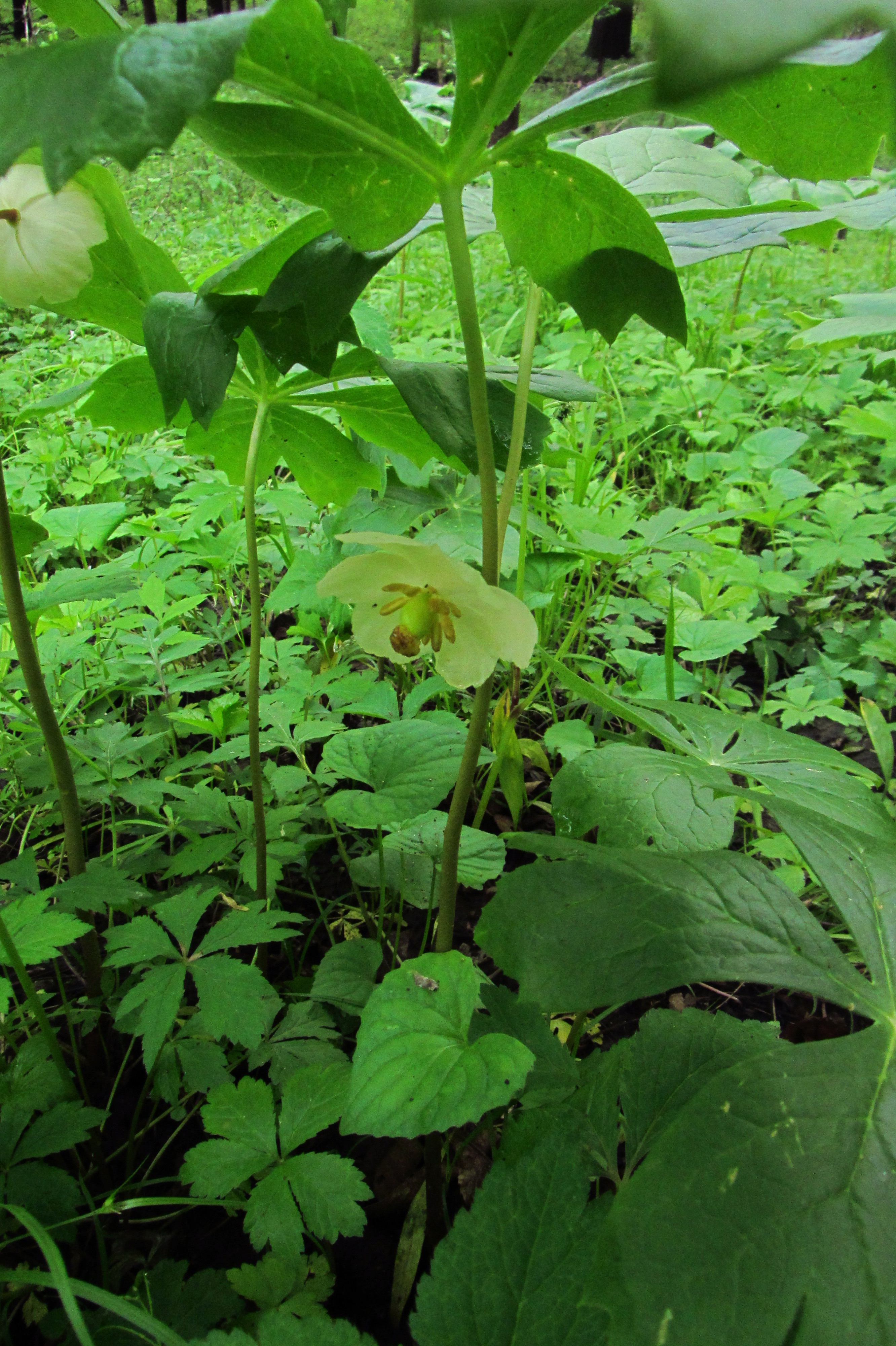 Those are wild chervil plants with narrow seed pods in front of the Mayapple. 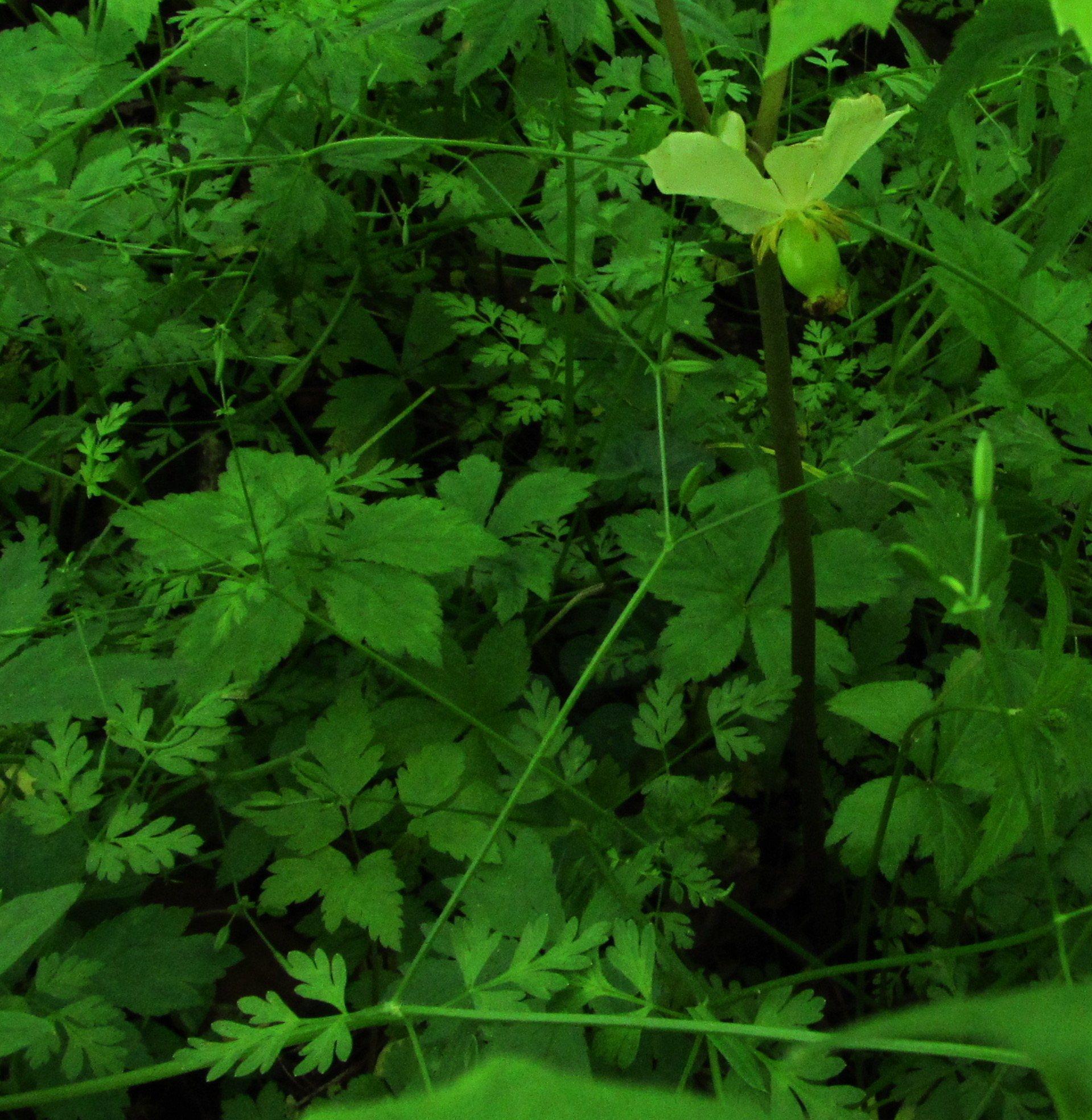 I took this picture yesterday. These fruit won't be ready to harvest for a few more weeks. 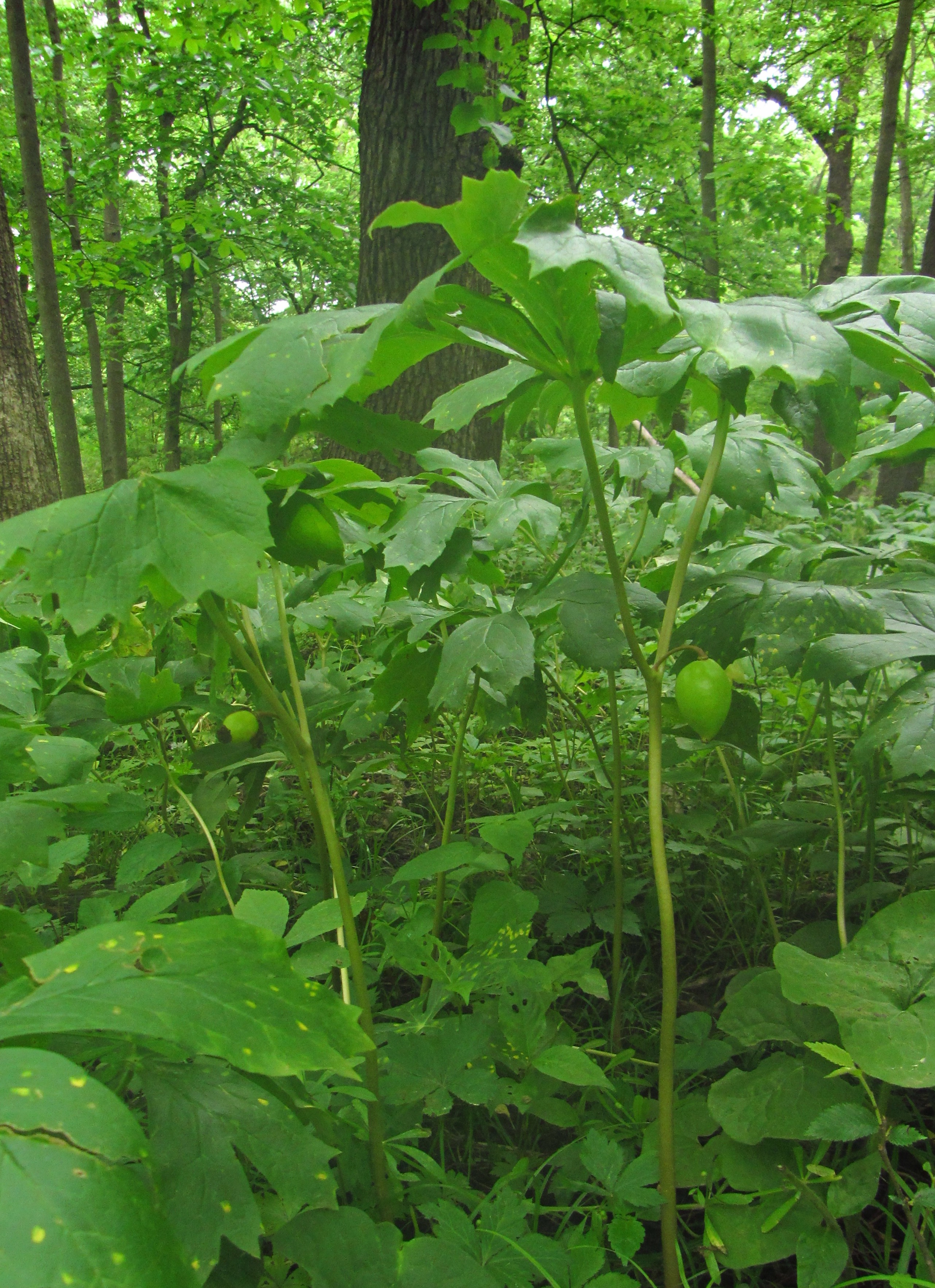