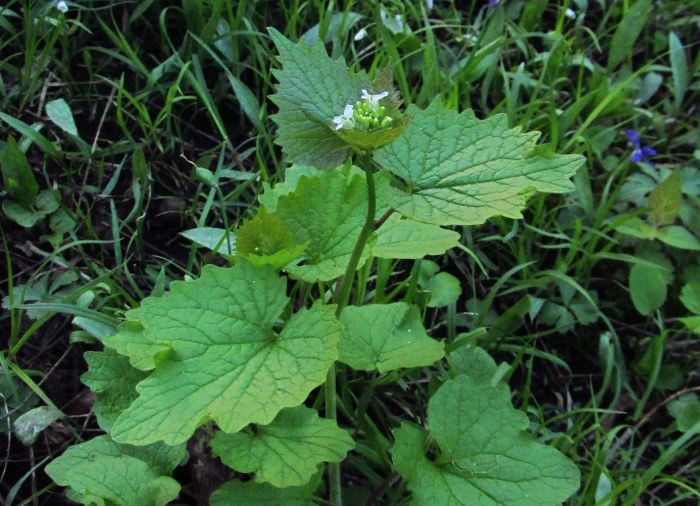 Although Bleeding Heartland's wildflowers series has mostly featured native plants, I rarely feel hostile toward flowering plants that don't belong in Iowa. Some of these naturalized species, like chicory and moth mullein, tend to stick to disturbed ground. Dame's rocket can be invasive, but at least it is pretty and serves a lot of pollinators.

I can't muster the slightest bit of sympathy for garlic mustard (Alliaria petiolata), though.

This European invader can quickly take over high-quality woodland habitats and "has the capacity to crowd out and destroy all of the native wildflowers that bloom during the spring." It has become widespread across much of the U.S. and Canada.

Garlic mustard's only redeeming quality is that it is edible--by some accounts, "delicious." I haven't cooked with these plants, but I've read you can add a few leaves to a salad, saute some with butter or oil, or use large bunches for pesto or a Japanese-style side dish.

May or early June is prime time for trying to eradicate garlic mustard colonies. Pulling out the whole root is difficult later in the summer, when the plants are more developed. The best time to seek and destroy is a day or two after a rainfall, because the roots come out more easily from wet or damp earth.

Garlic mustard grows in a two-year cycle. The Illinois Wildflowers site notes that during the first year, "it consists of a small rosette of leaves." You may see just a few of these leaves scattered in a wooded area: 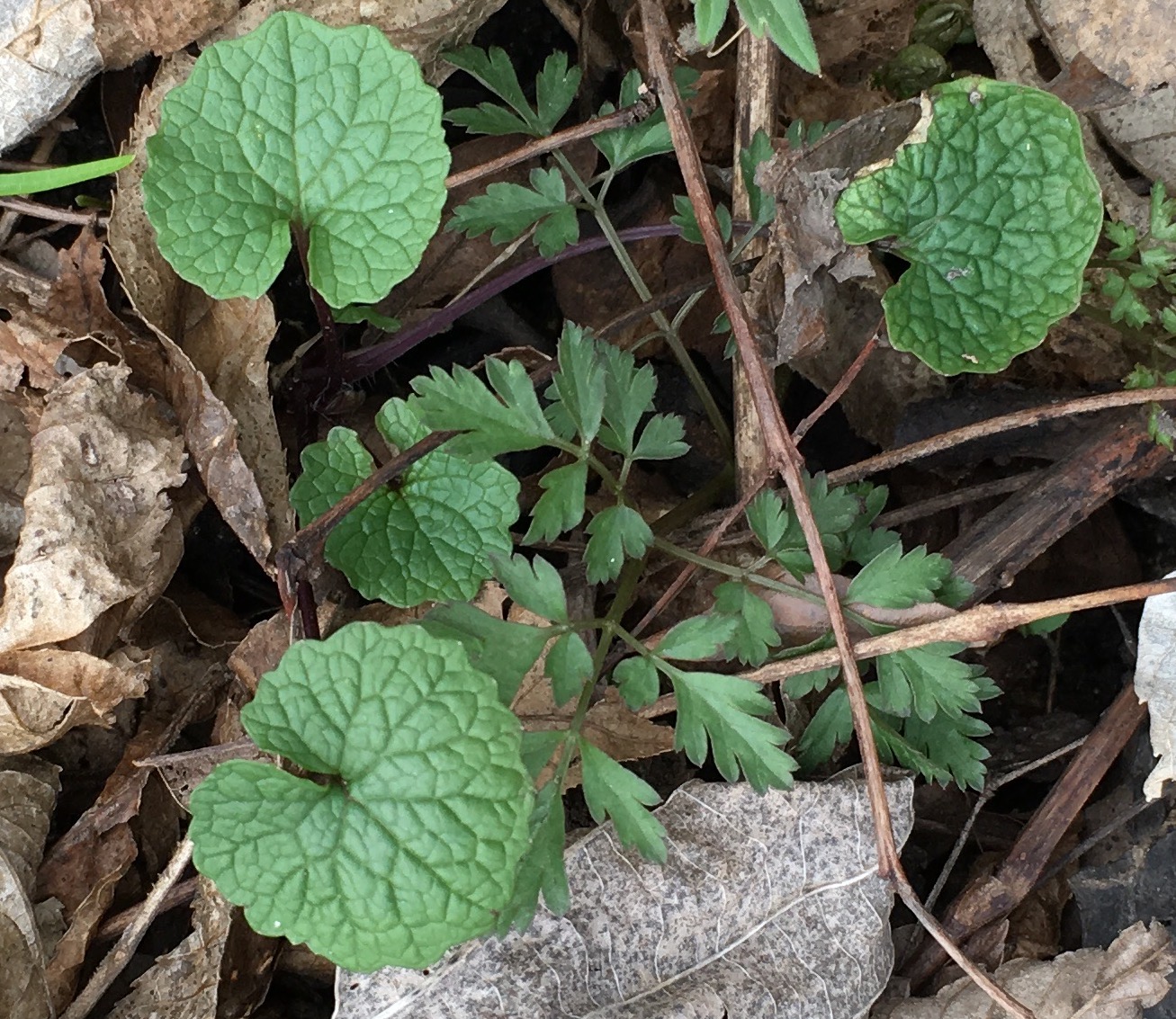 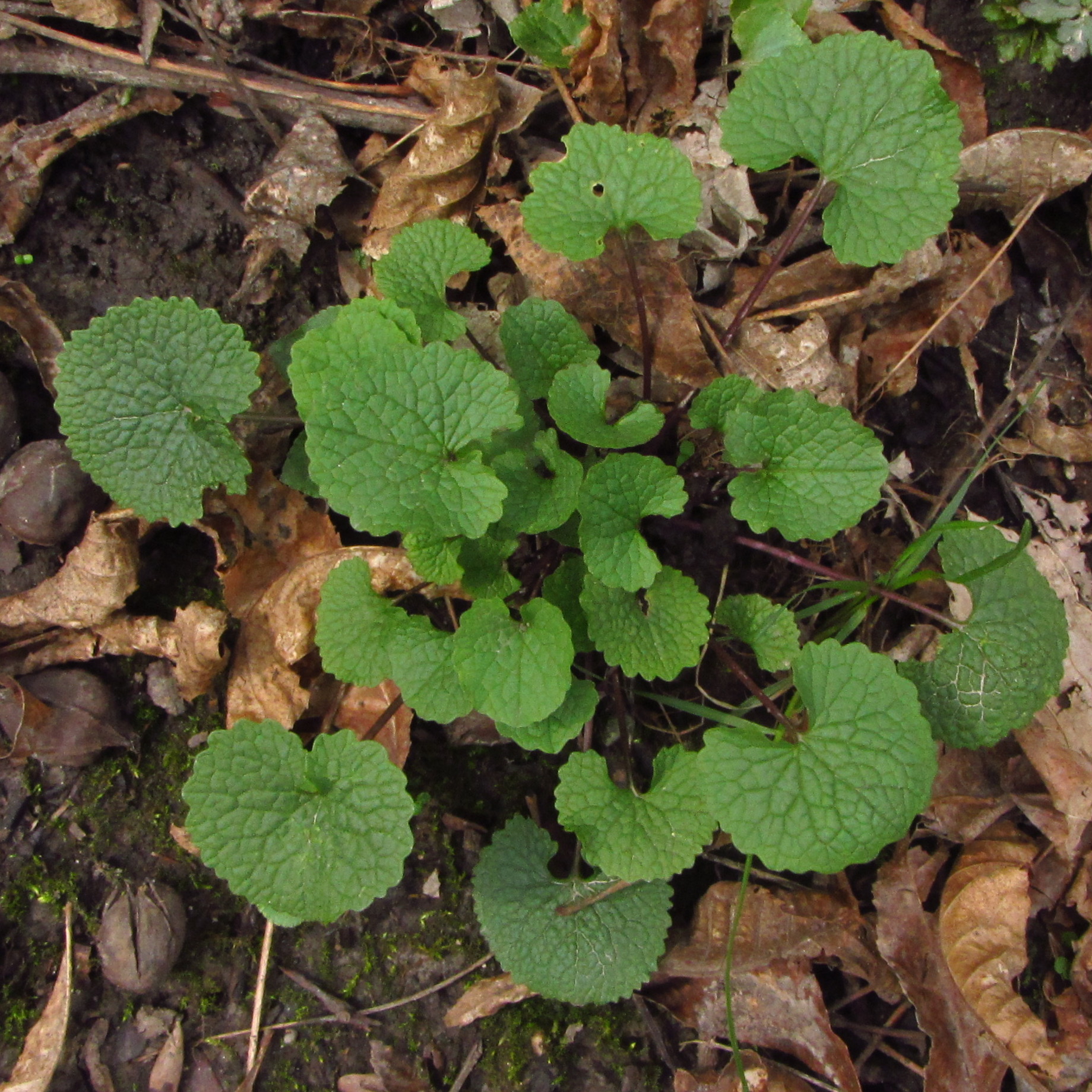 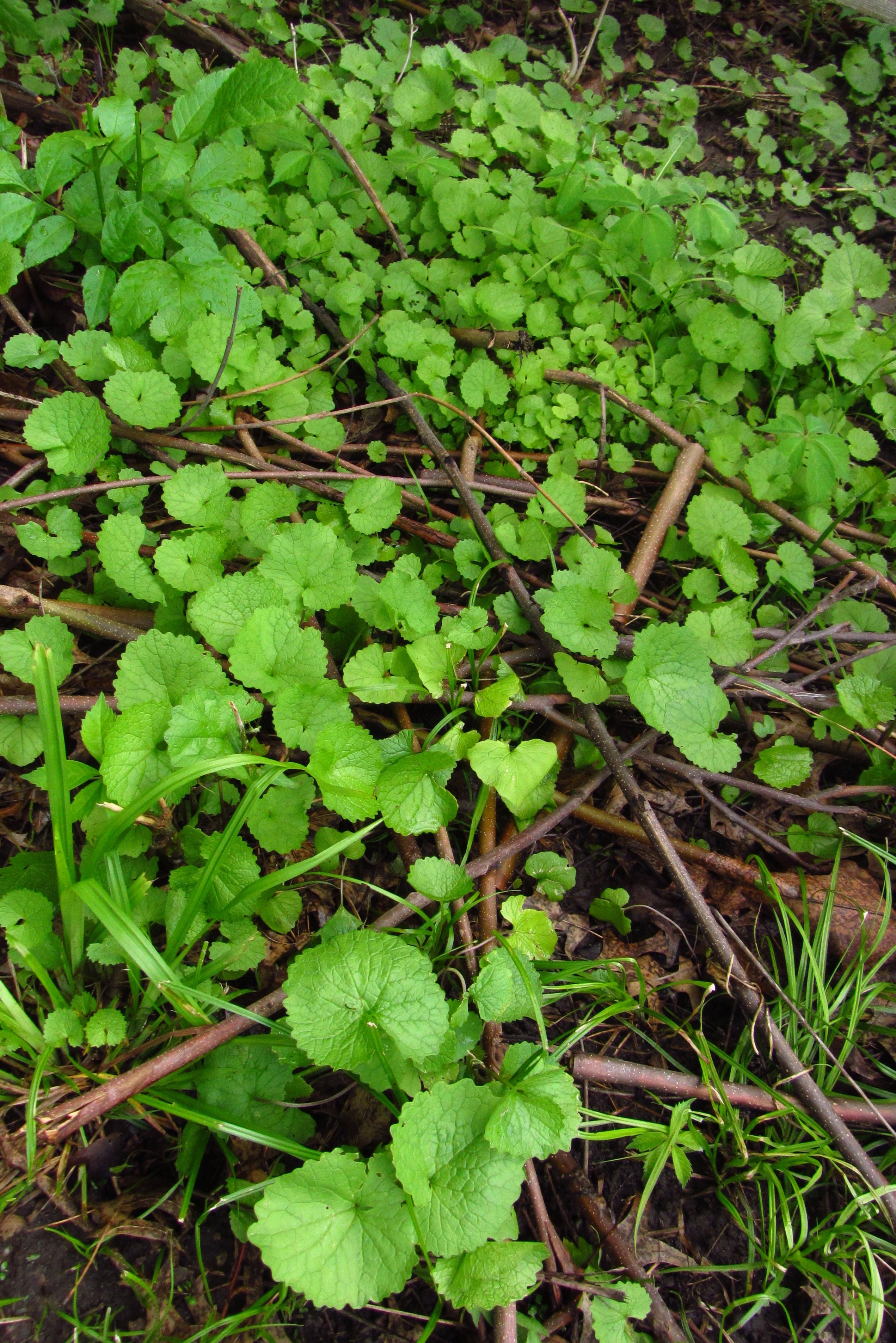 Garlic mustard stays close to the ground in the first year but typically grows taller the second year, when flowers appear. This plant is budding. 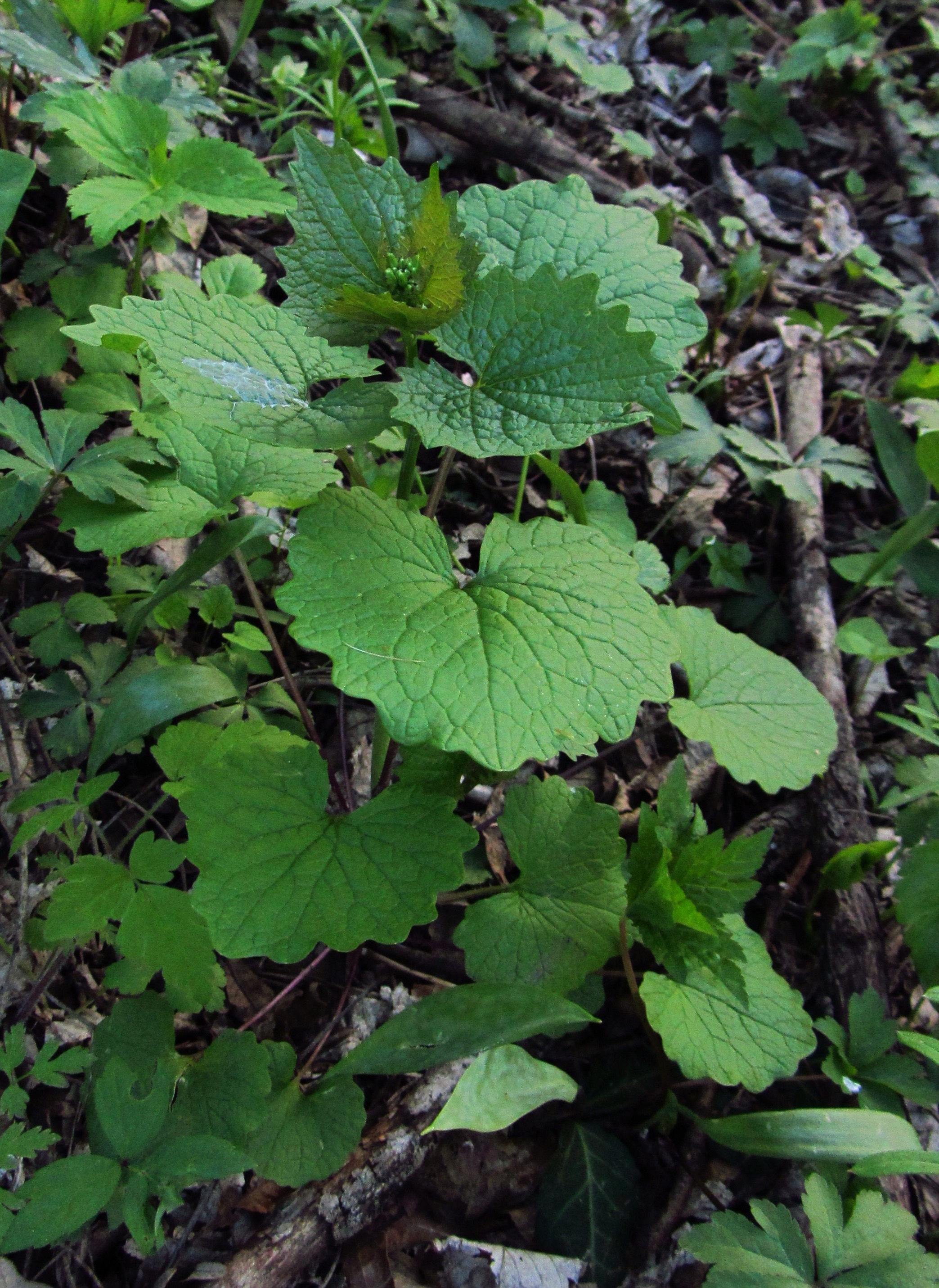 The flowers have four petals, which is often a clue to European origin. Many wildflowers native to North America have five petals. On the taller plants, you may notice rounded leaves near the base and narrower, pointed leaves higher up near the flowers. 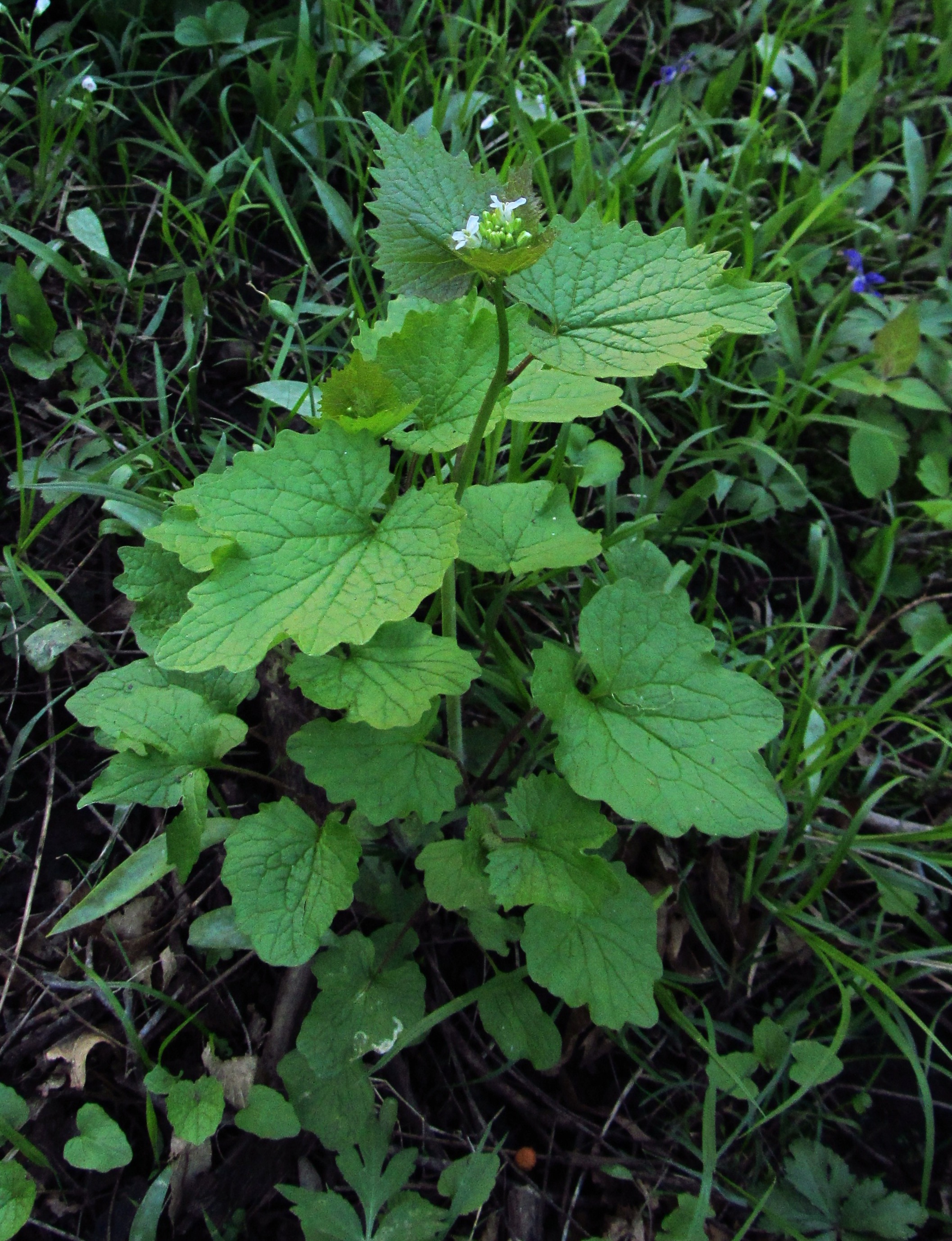 Within a few weeks, "The flowers are replaced by narrow seedpods that are called 'siliques.' These seedpods are about 1½–2" long and narrowly cylindrical (although slightly 4-angled in circumference)." Seed pods are developing on the plants in the next few pictures. 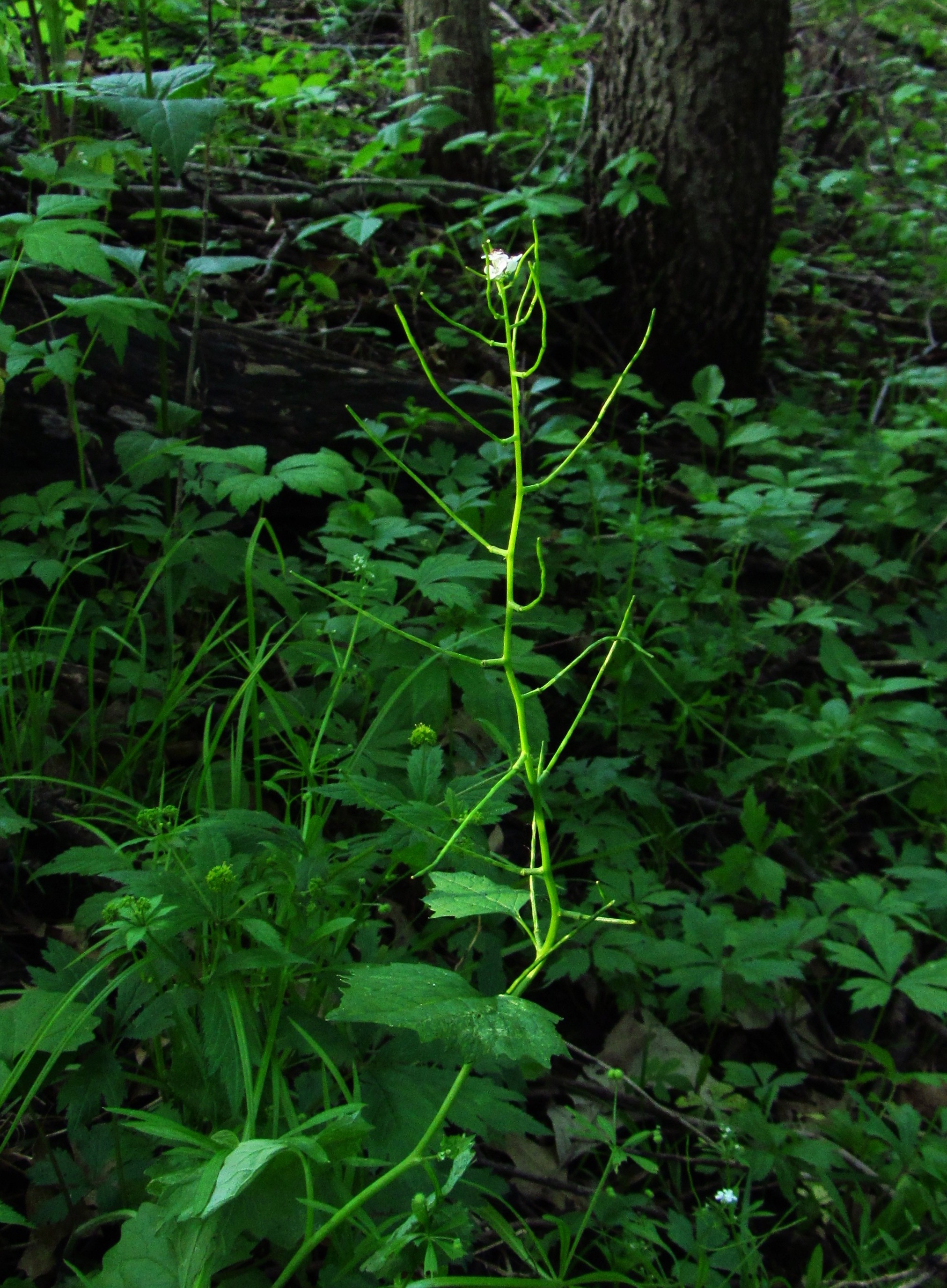 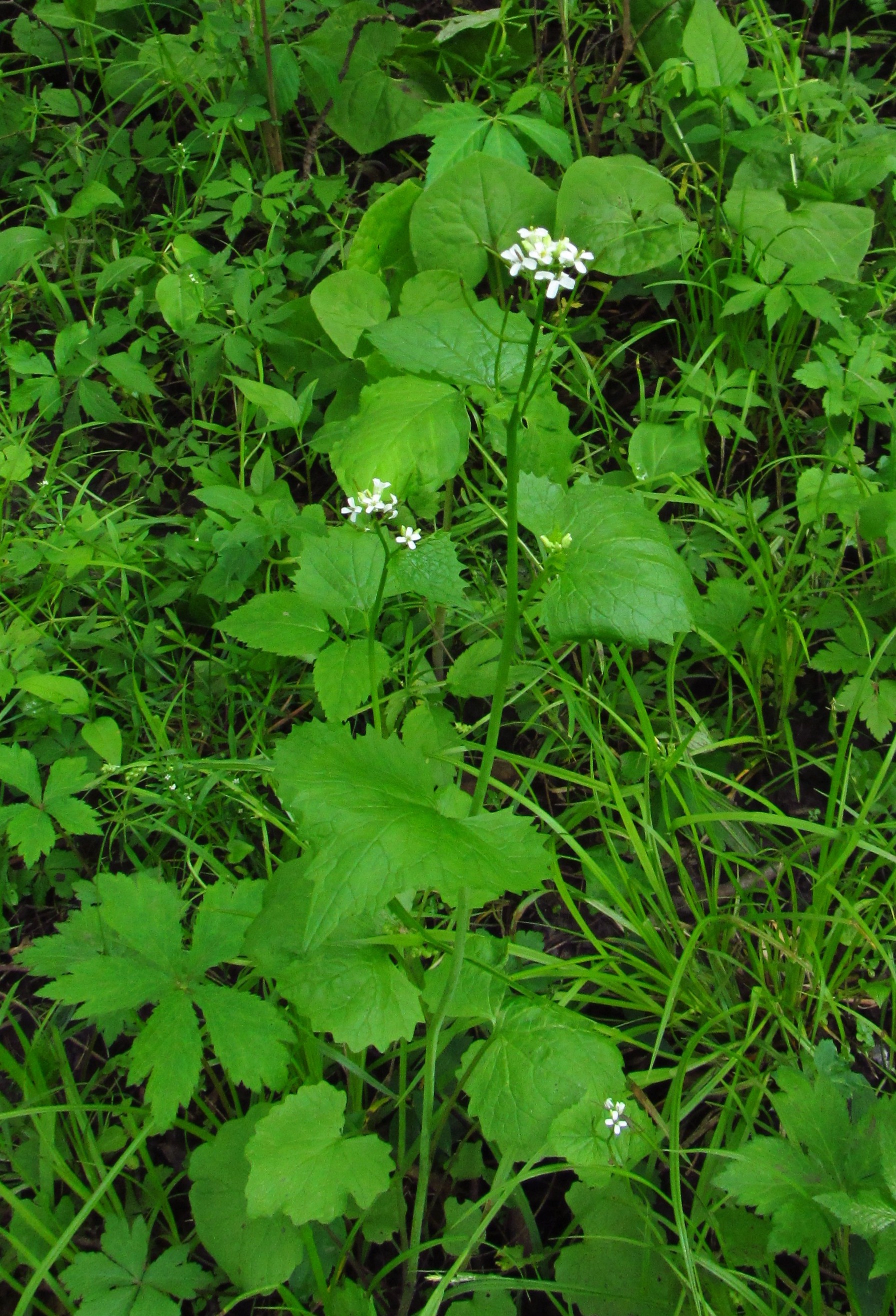 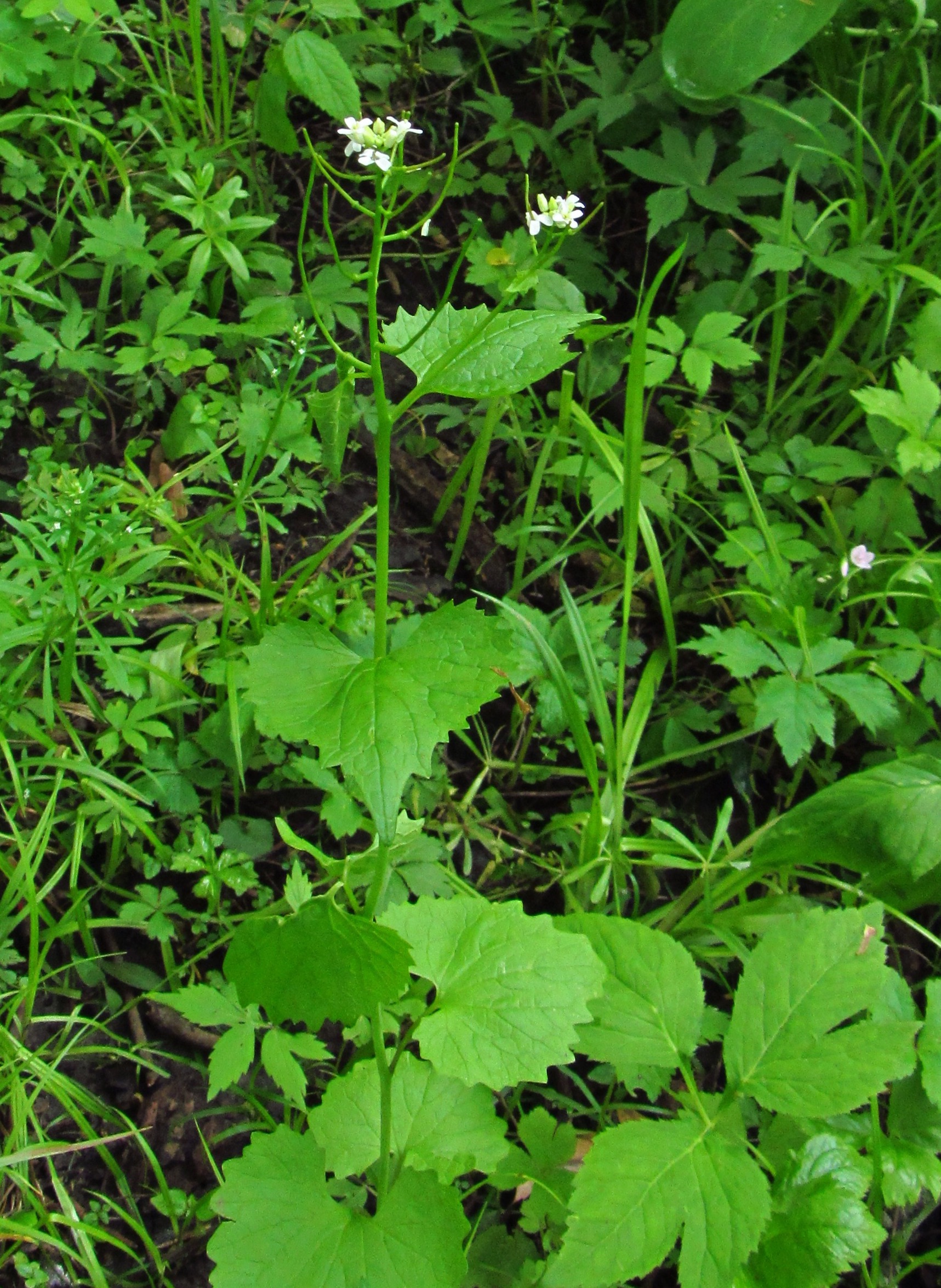 To get rid of garlic mustard, you must pull out the whole root. New shoots will grow if you only break or cut the stems. In my experience, it helps to grip the plant as close to the base as possible and pull gently rather than yanking. It's tricky, because the root often takes a sharp turn underground and appears to grow at a right angle to the stem. 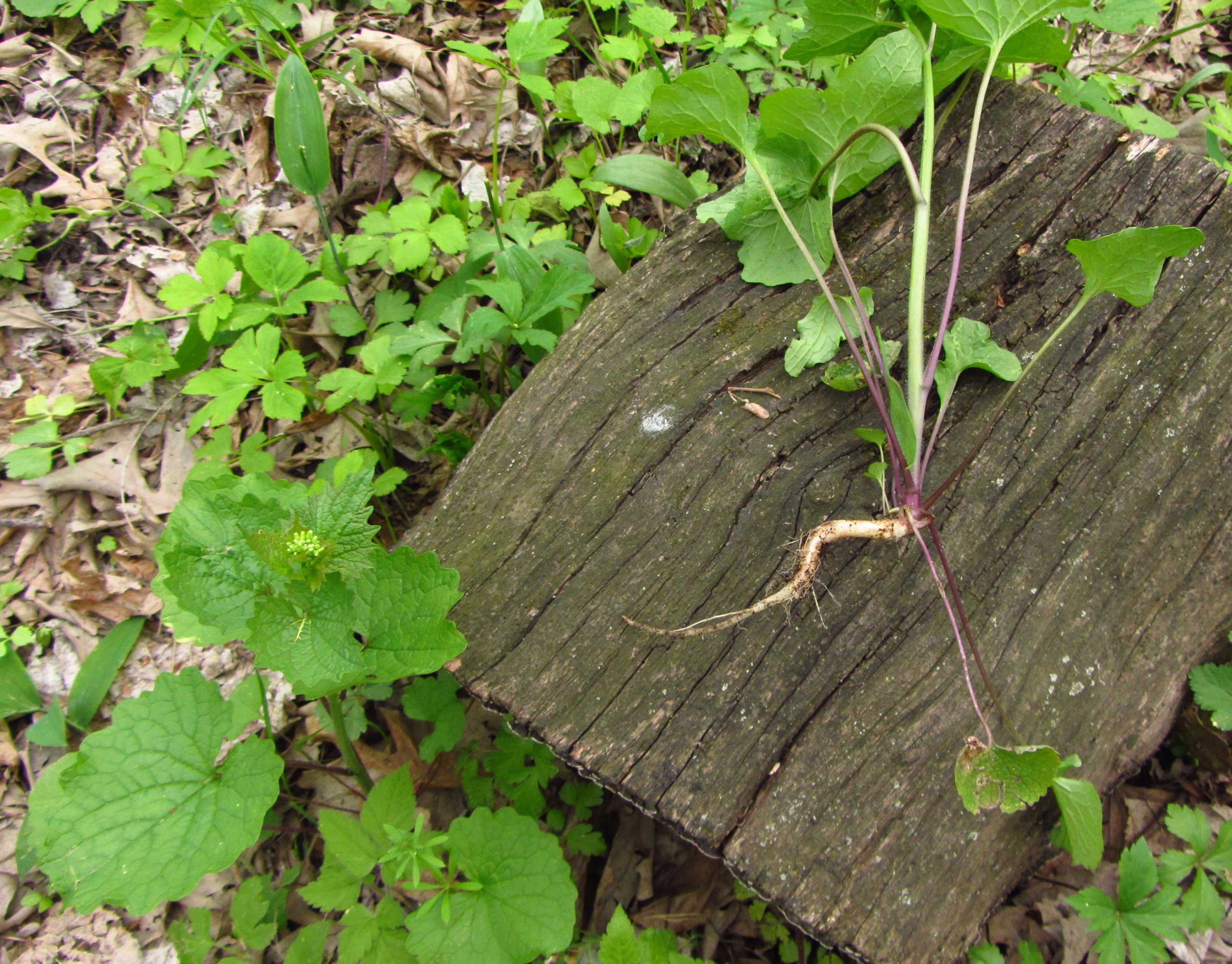 I'd heard garlic mustard plants can't be left on the ground after pulling up, but must be thrown away. Four years ago, I confirmed the conventional wisdom was accurate. Having run out of garbage bags, I left some armfuls of garlic mustard on the porch until I could get to the store. A few days later, I realized some plants were growing out of the pile. 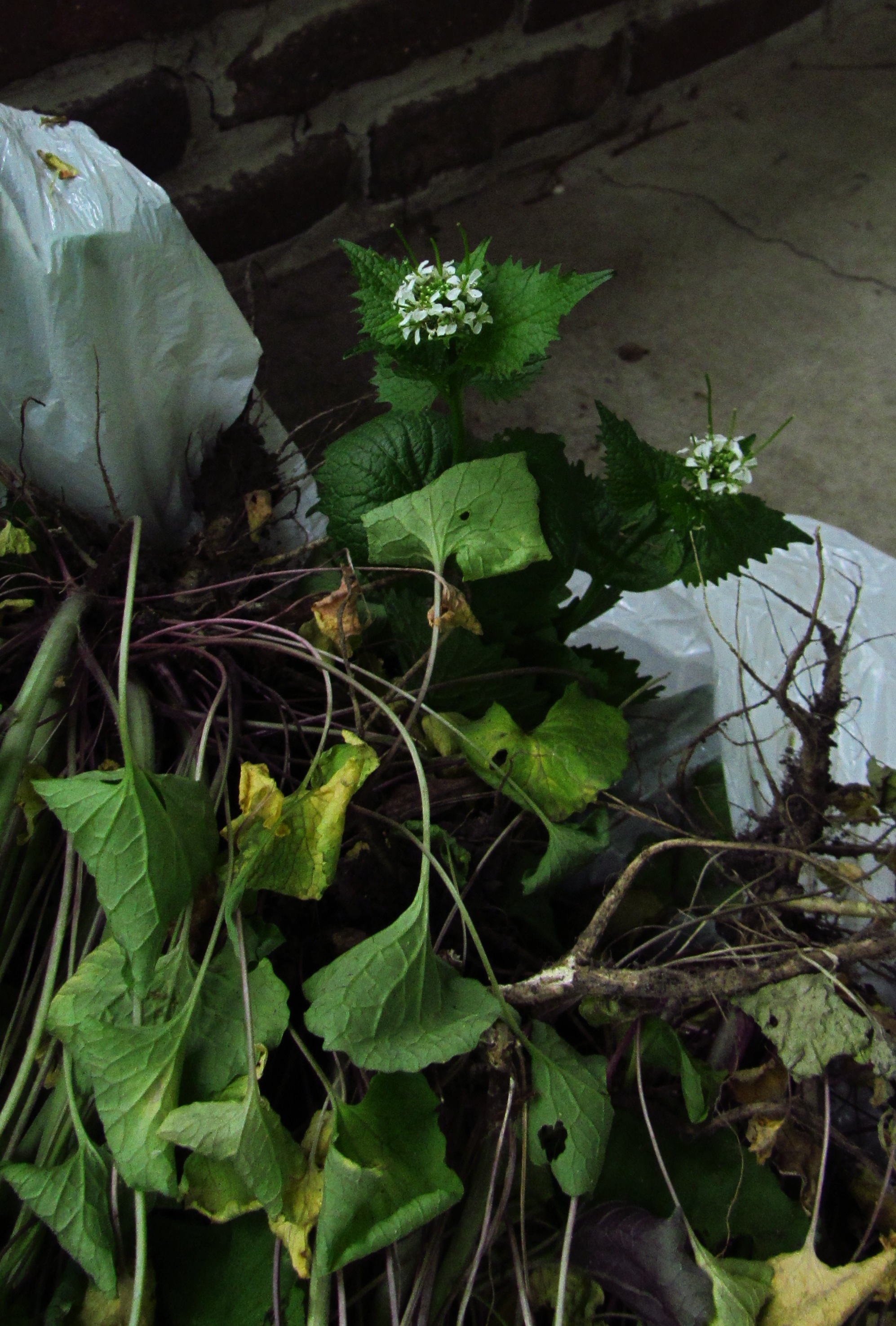 I replicated the experiment this year. Sure enough, some of the plants I left lying on the driveway seemed determined to flower and spread their seed. 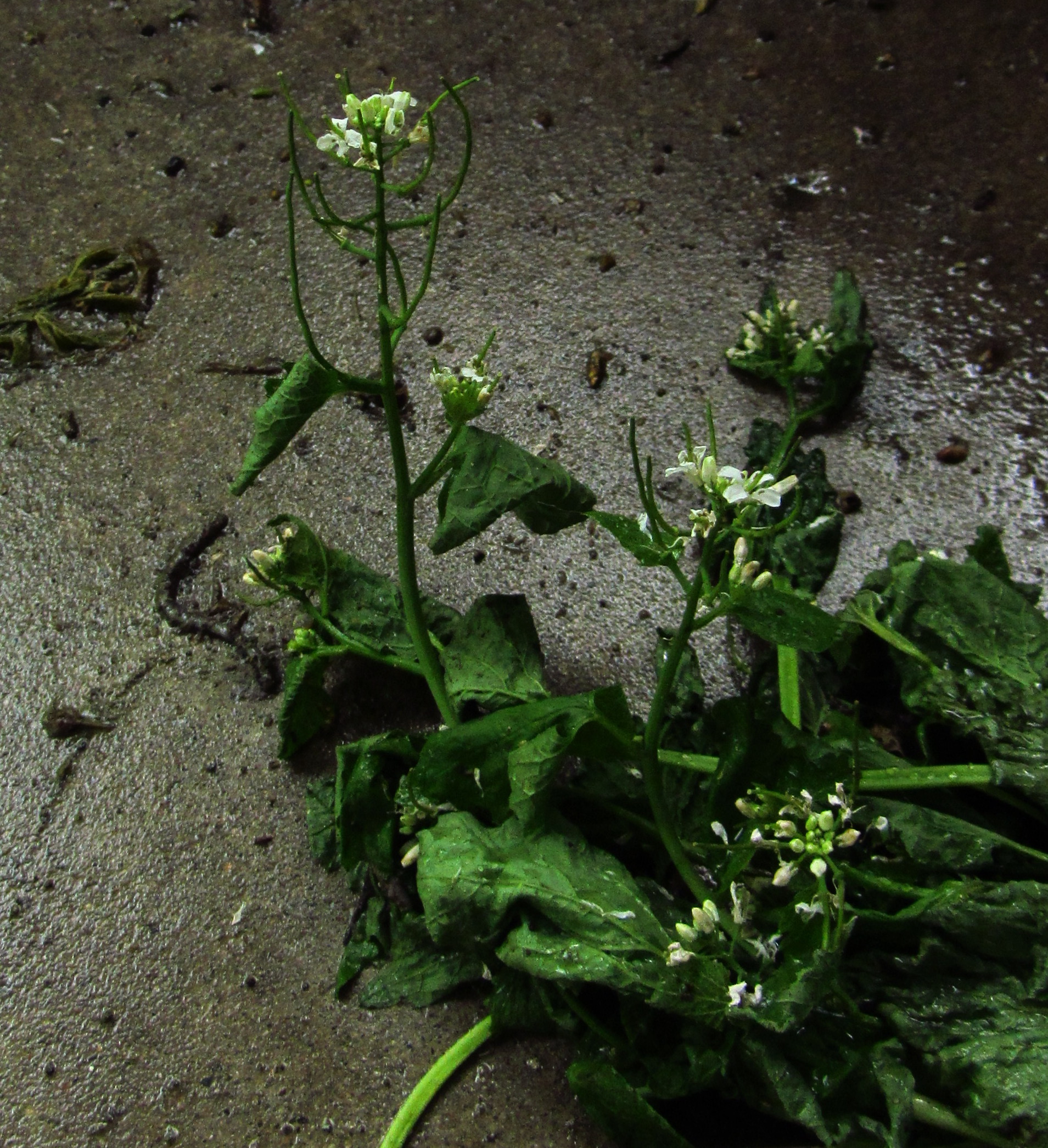 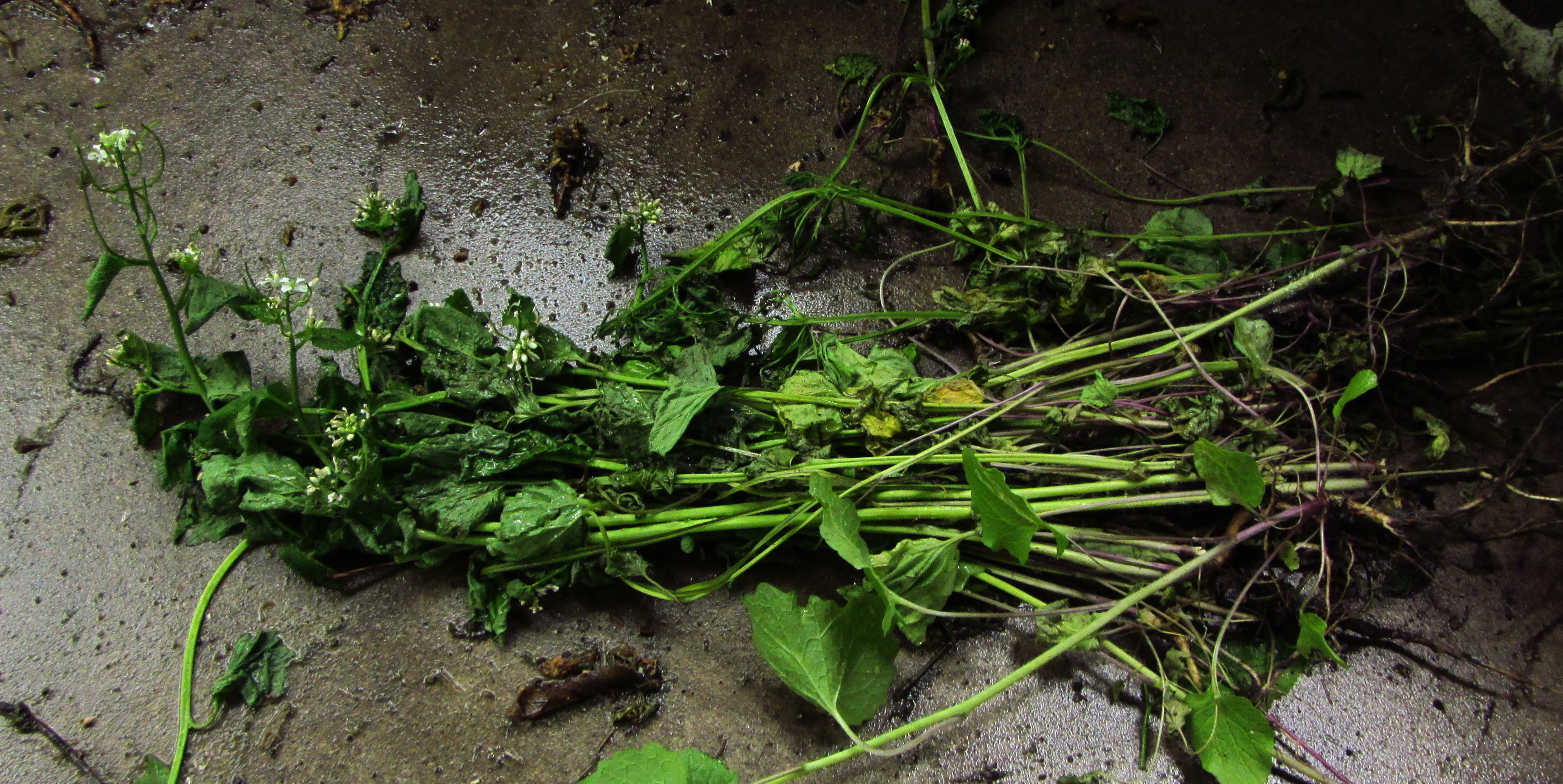 A week or so ago, I was stunned to see a zombie garlic mustard plant growing out of a garbage bag I had set aside but not tied shut. 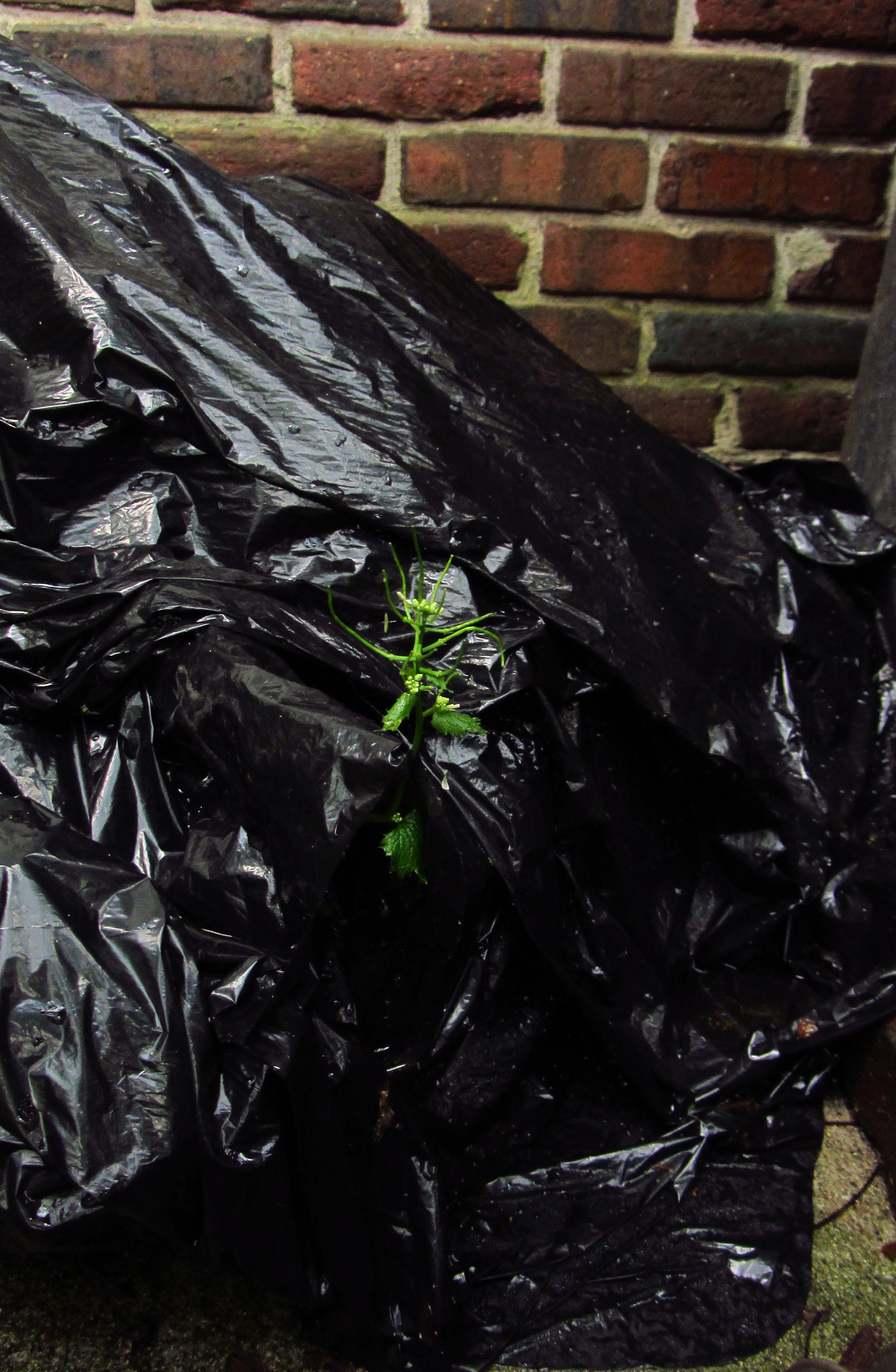 All of the garlic mustard plants in the next few shots were ripped out of the ground seconds after I put my camera away. With Virginia bluebells in the background: 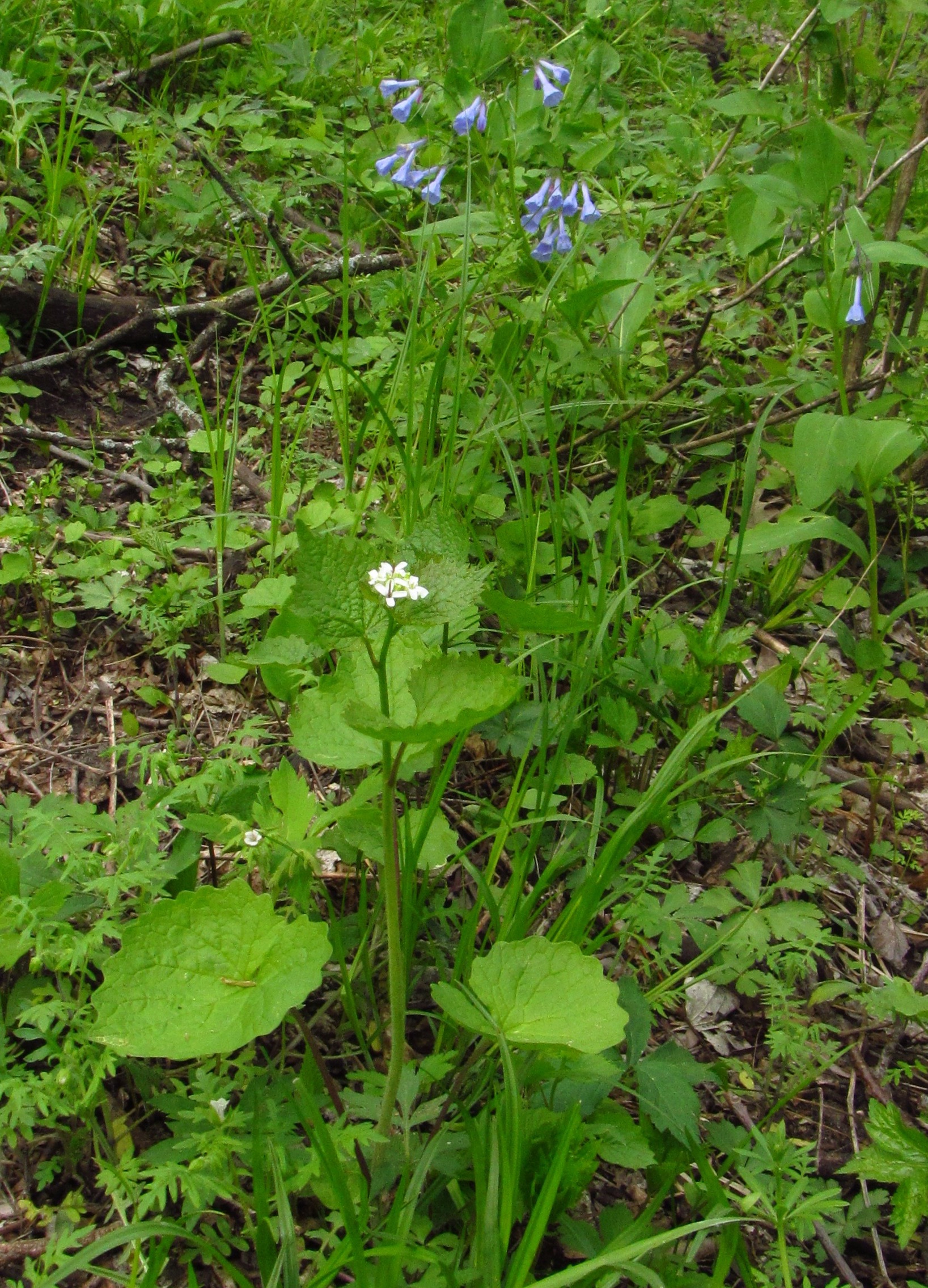 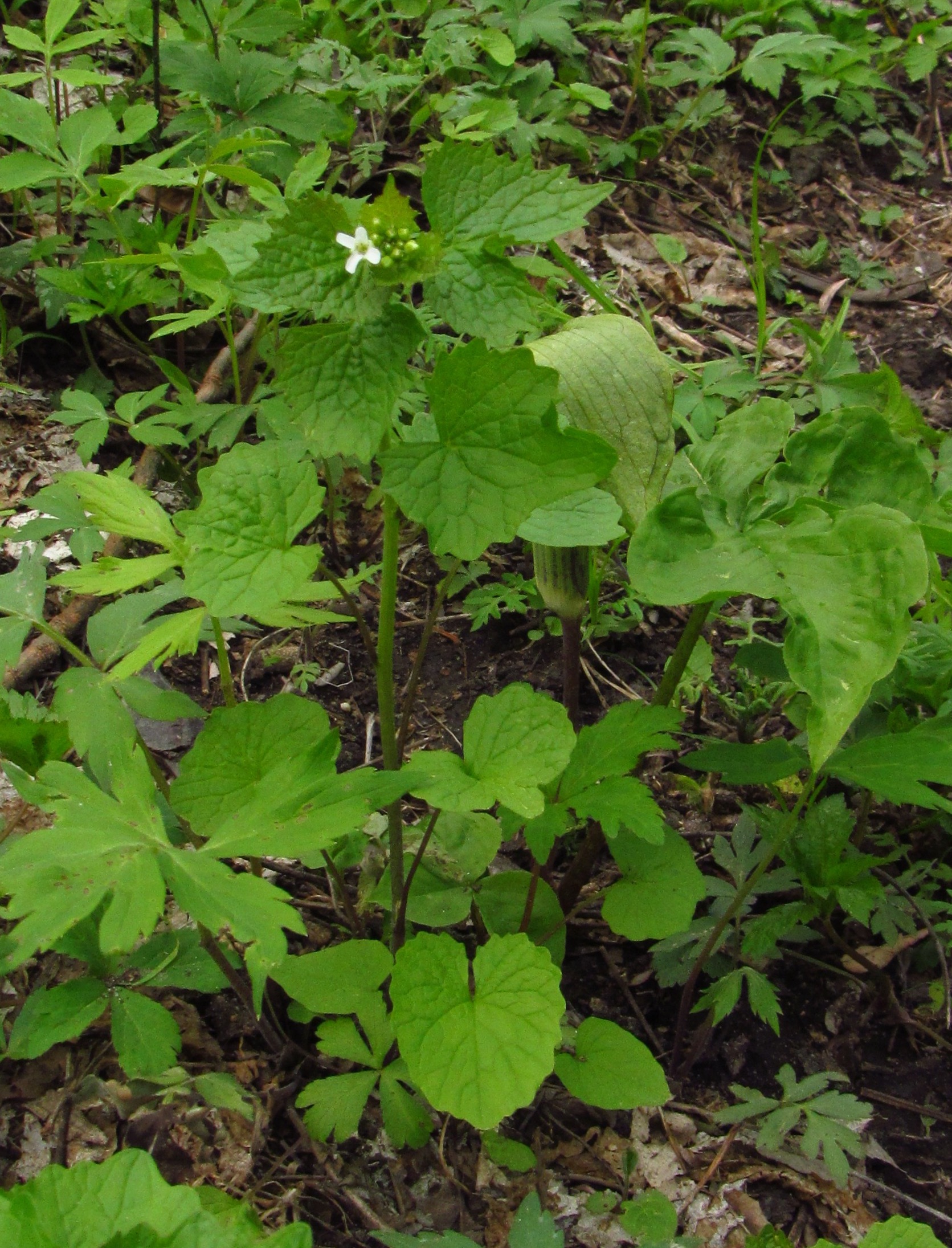 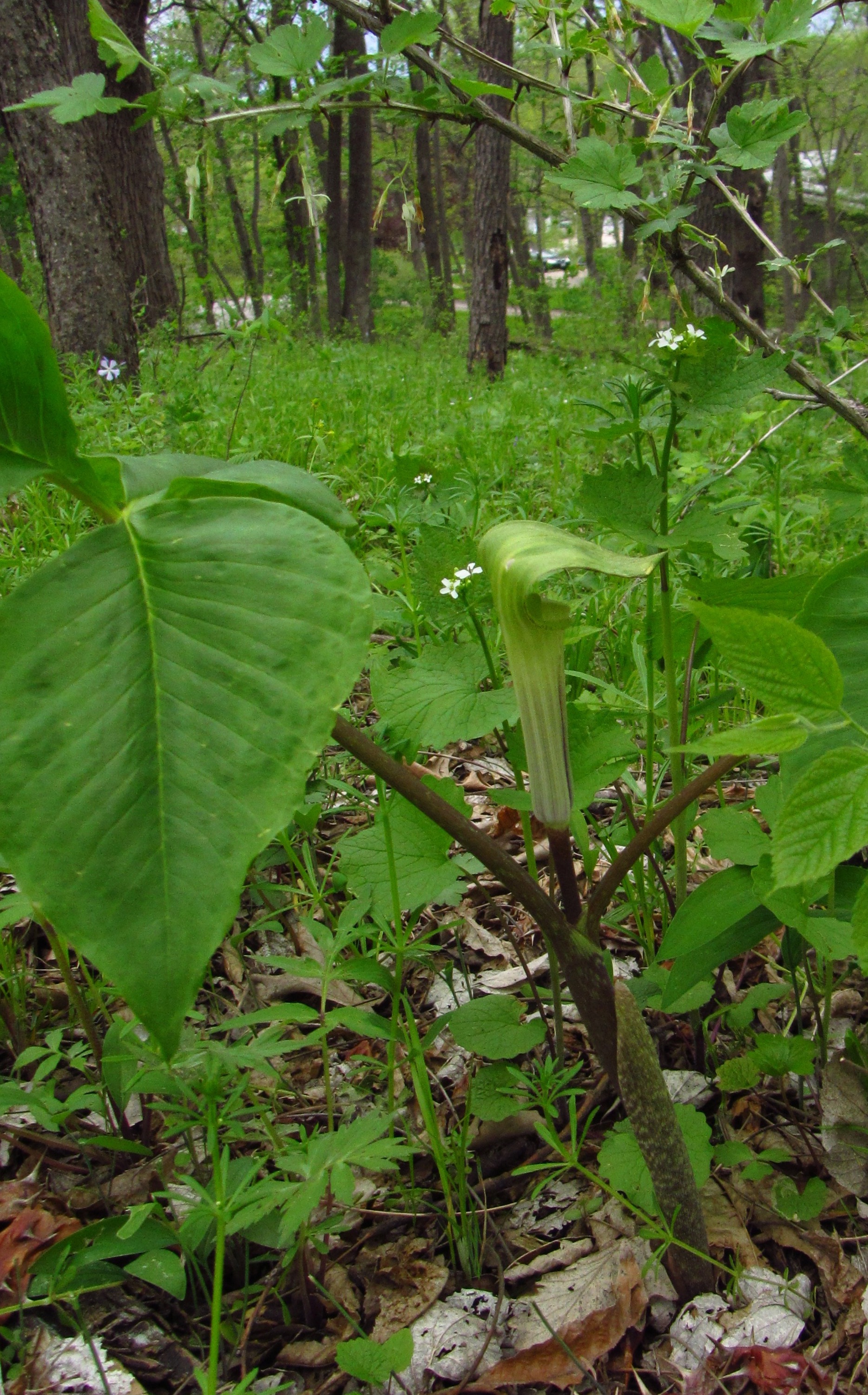 Growing in a patch of wild ginger: 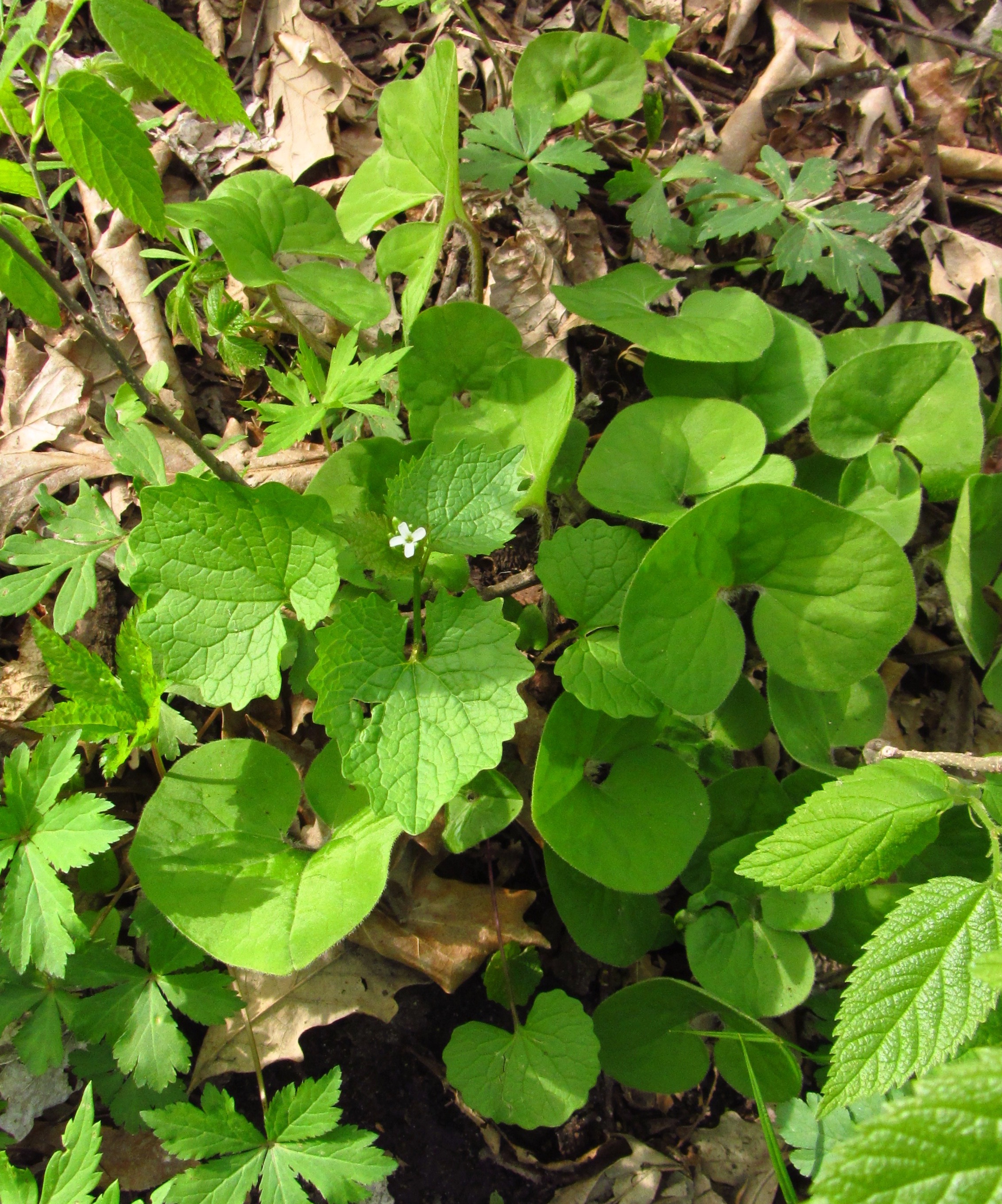 Growing through the lobed leaves of May apples/umbrella plants: 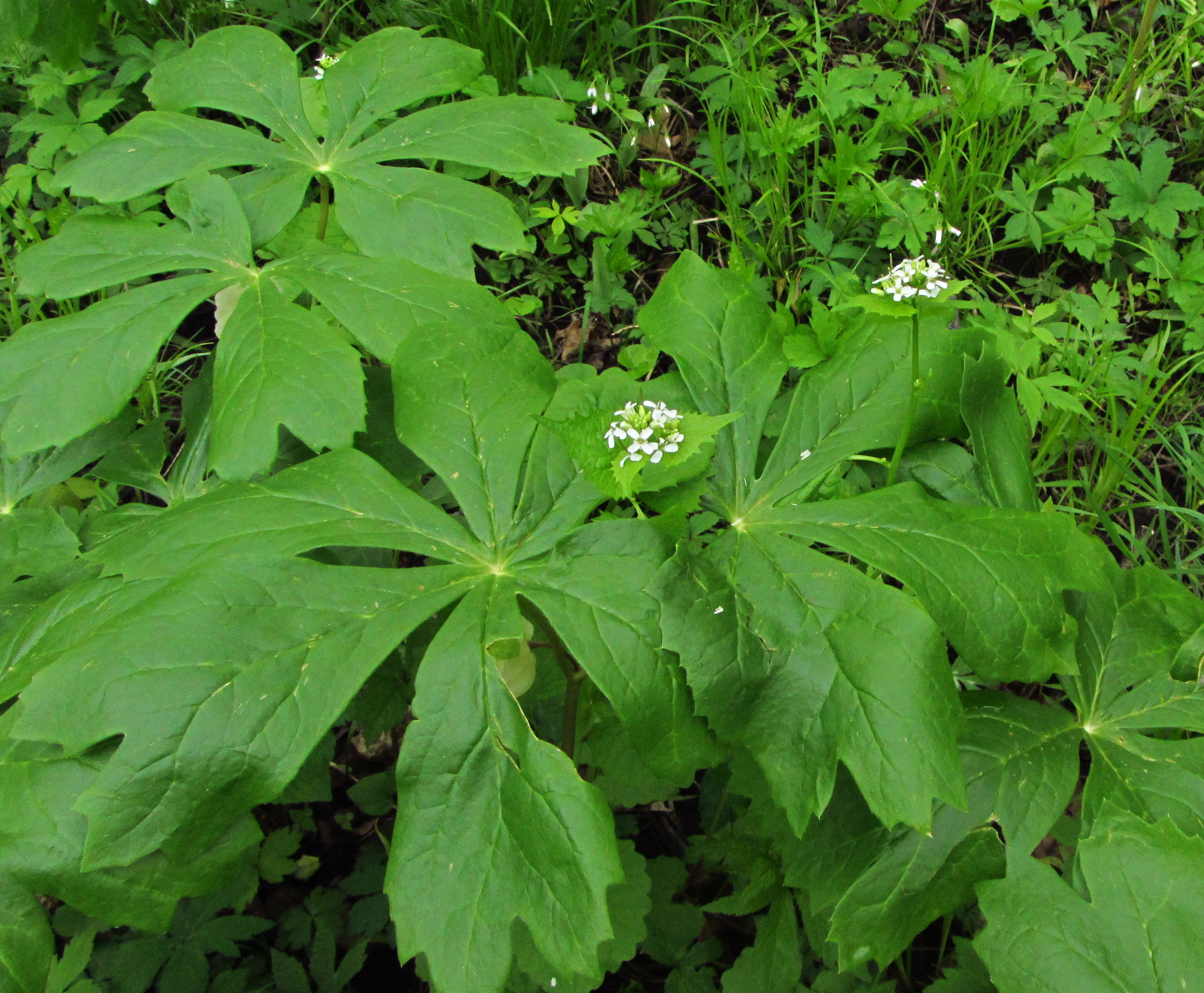 Be careful when you are getting rid of garlic mustard. Poison ivy also thrives in shady wooded habitats. For that reason, I lacked the courage to go after this large plant. 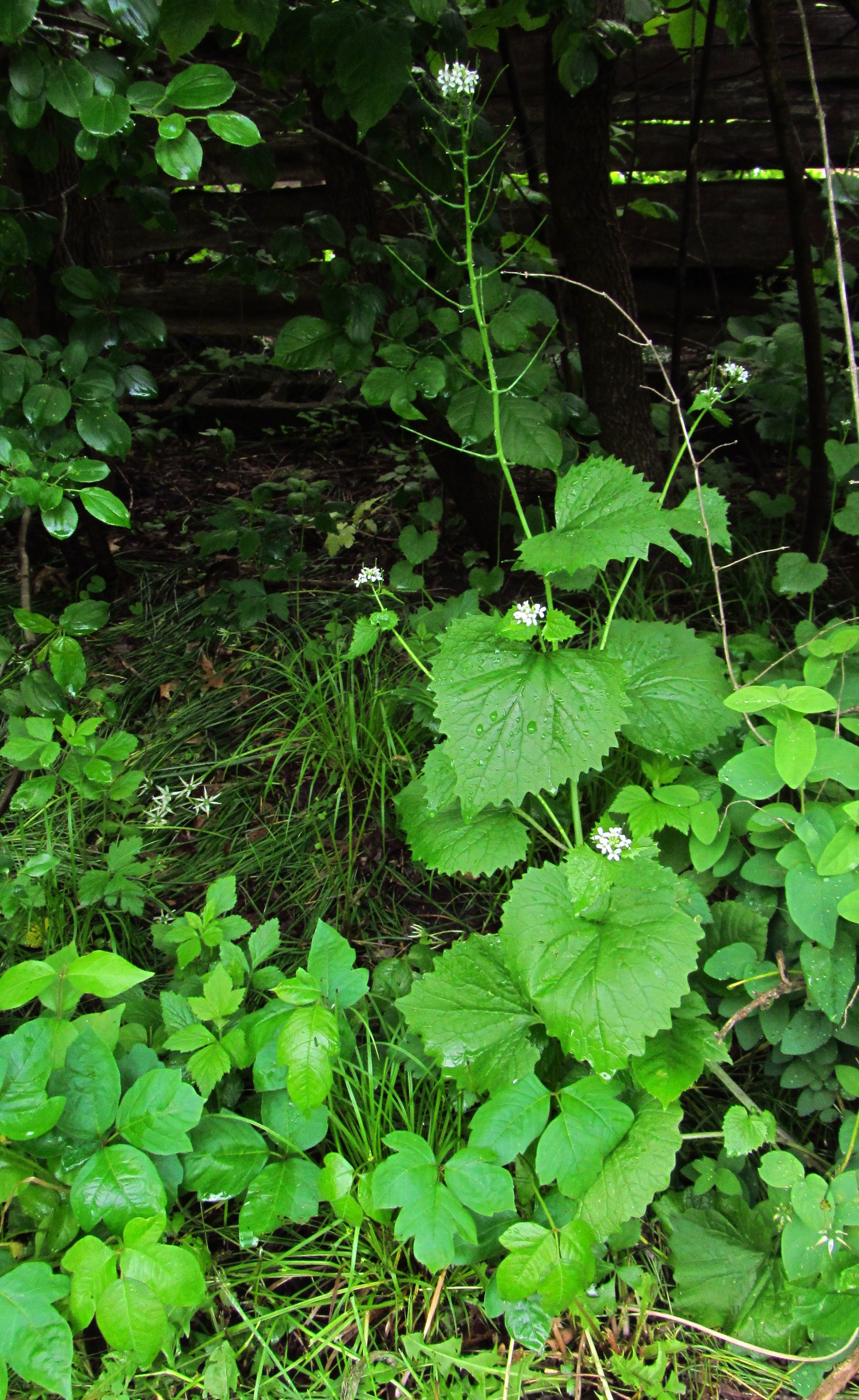