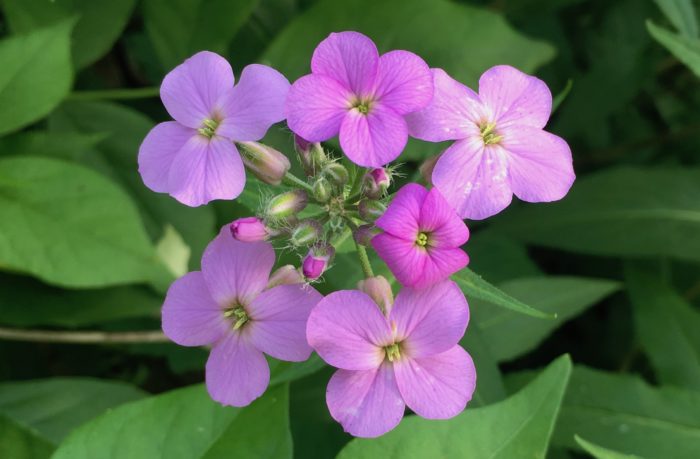 Since Bleeding Heartland's Iowa wildflower series began in 2012, I've had an editorial bias toward native plants. But occasionally I have covered non-native species. Last weekend, I saw large stands of poison hemlock blooming in ditches and near railroad tracks. I haven't seen wild parsnip flowering yet, but that will happen anytime now.

Today's featured wildflowers are often confused with the native Prairie phlox. But those bright pink flowers have five petals, while blossoms of the European invader Dame's rocket (Hesperis matronalis) have four.

Dame's rocket has become widespread in most of the U.S. and Canada, but it doesn't belong here. According to the Illinois Wildflowers website,

This species was introduced from Europe as an ornamental plant and it has been grown in gardens since the Roman Empire. Habitats include moist meadows, woodland edges and openings, thickets, semi-shaded fence rows, banks of drainage ditches, vacant lots, edges of yards, and flower gardens. Dame's Rocket is still cultivated as an ornamental plant, even though it sometimes invades natural habitats, particularly those that are partially shaded.

I wouldn't recommend cultivating Dame's rocket in a garden, but I do enjoy seeing its flowers in May or June. I took all of the enclosed pictures near the banks of tiny Rocklyn Creek, which flows into North Walnut Creek in Windsor Heights. 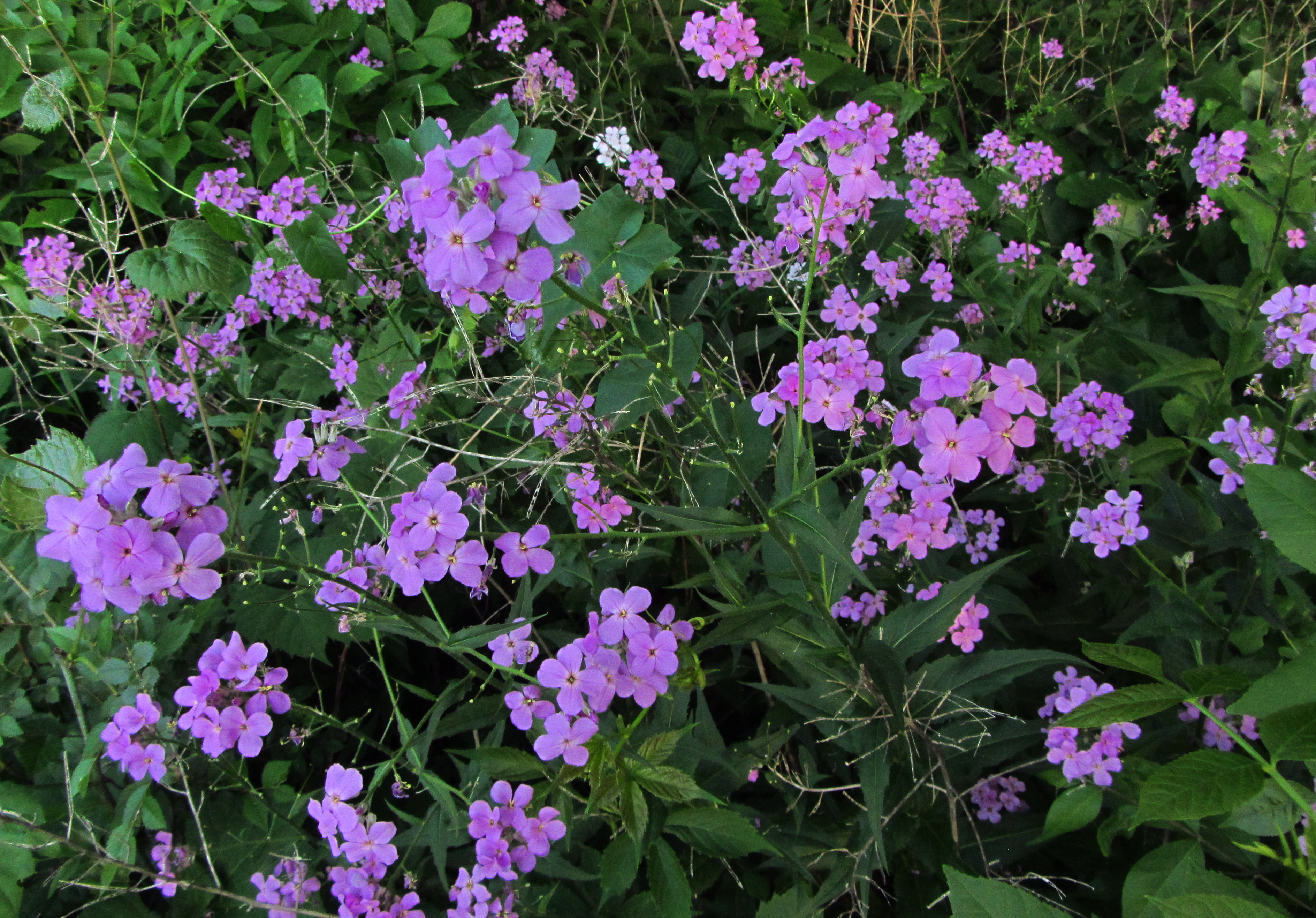 In this picture, it's easier to see the hairy stems and leaves "tapering to a sharply pointed tip, usually rounded at the base, hairy, with fine teeth around the edges." 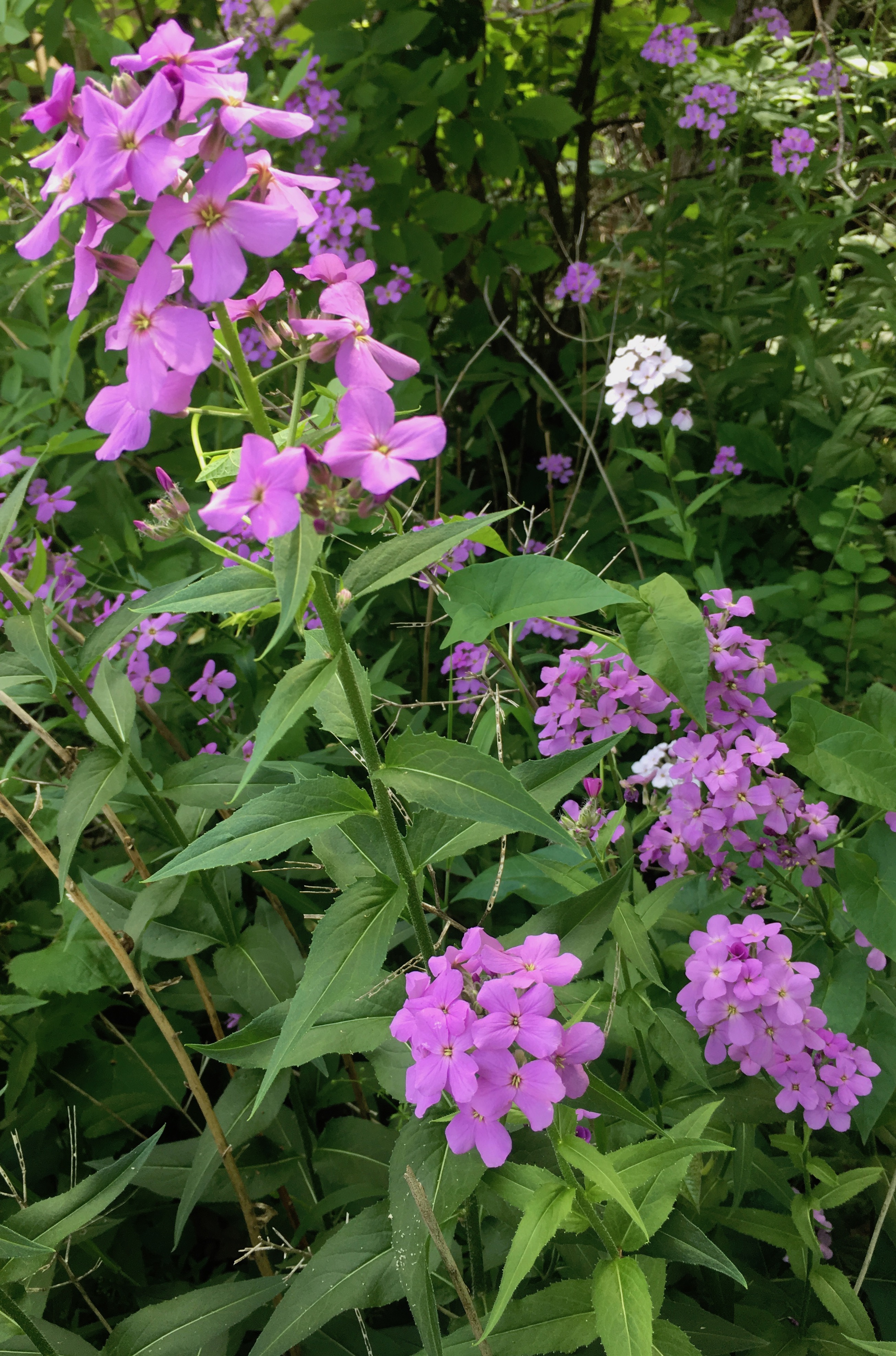 The Minnesota Wildflowers site notes that the color of Dame's rocket blossoms "ranges from white to pink to lavender to deep purple." I've most often seen pink flowers. 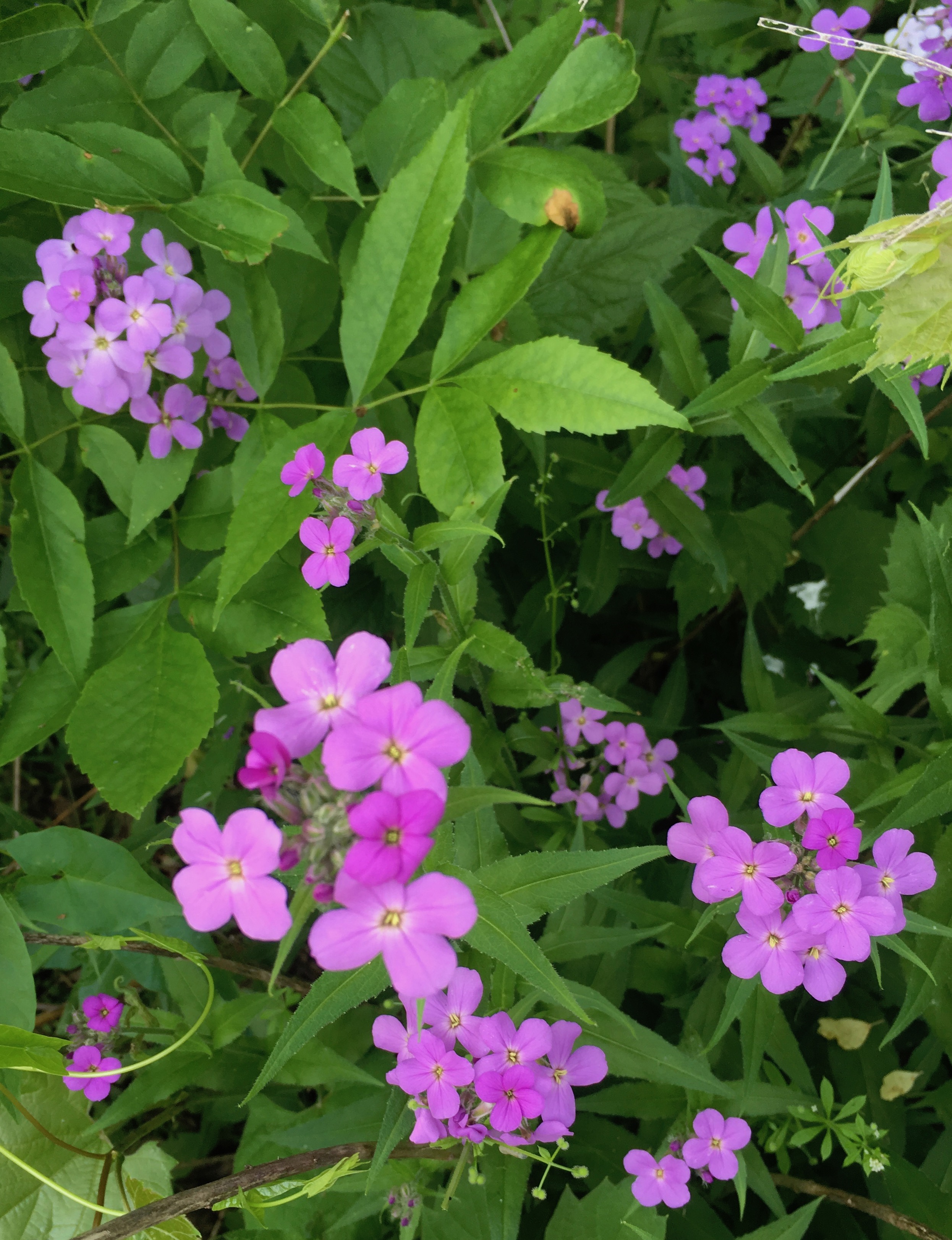 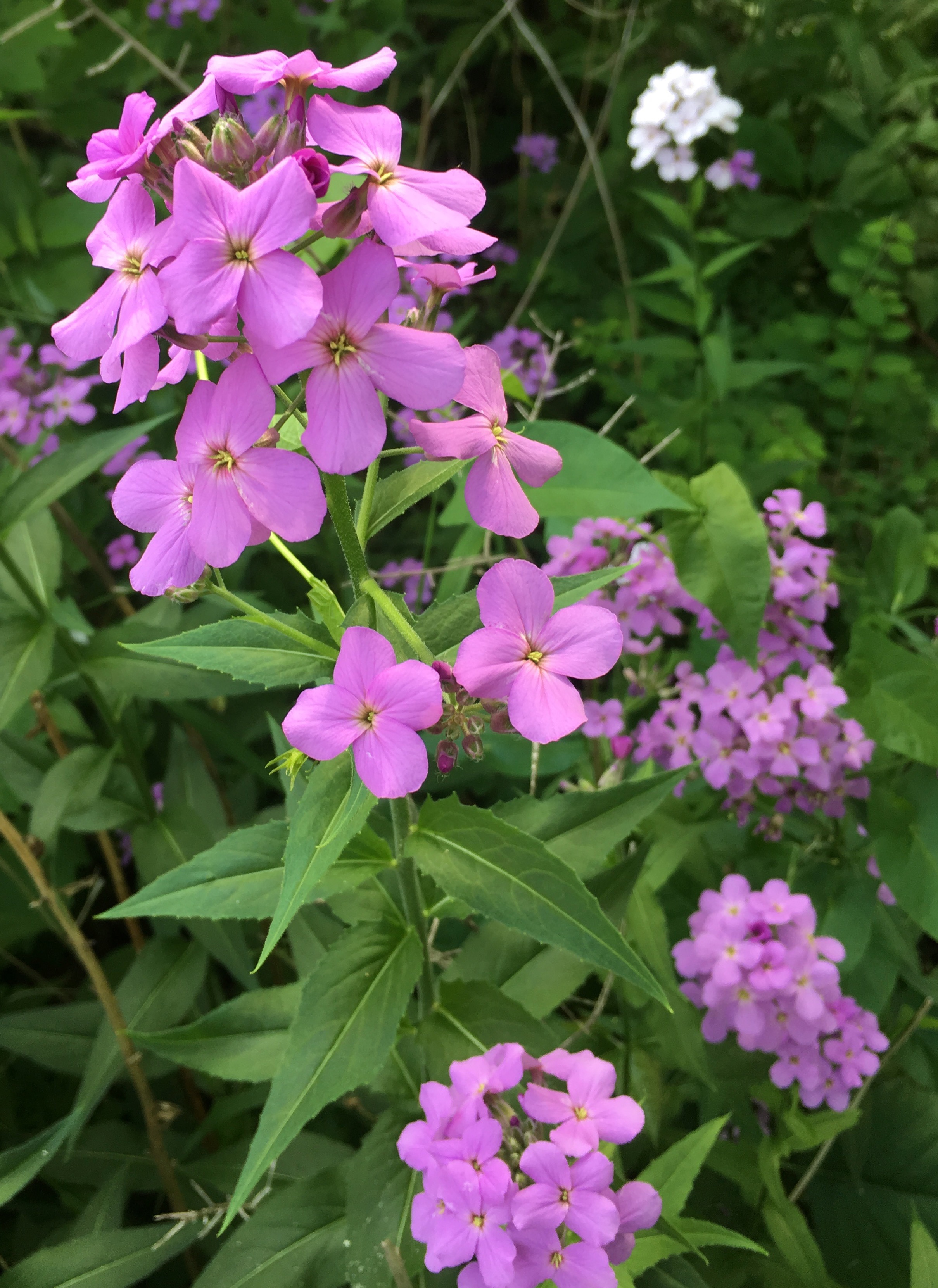 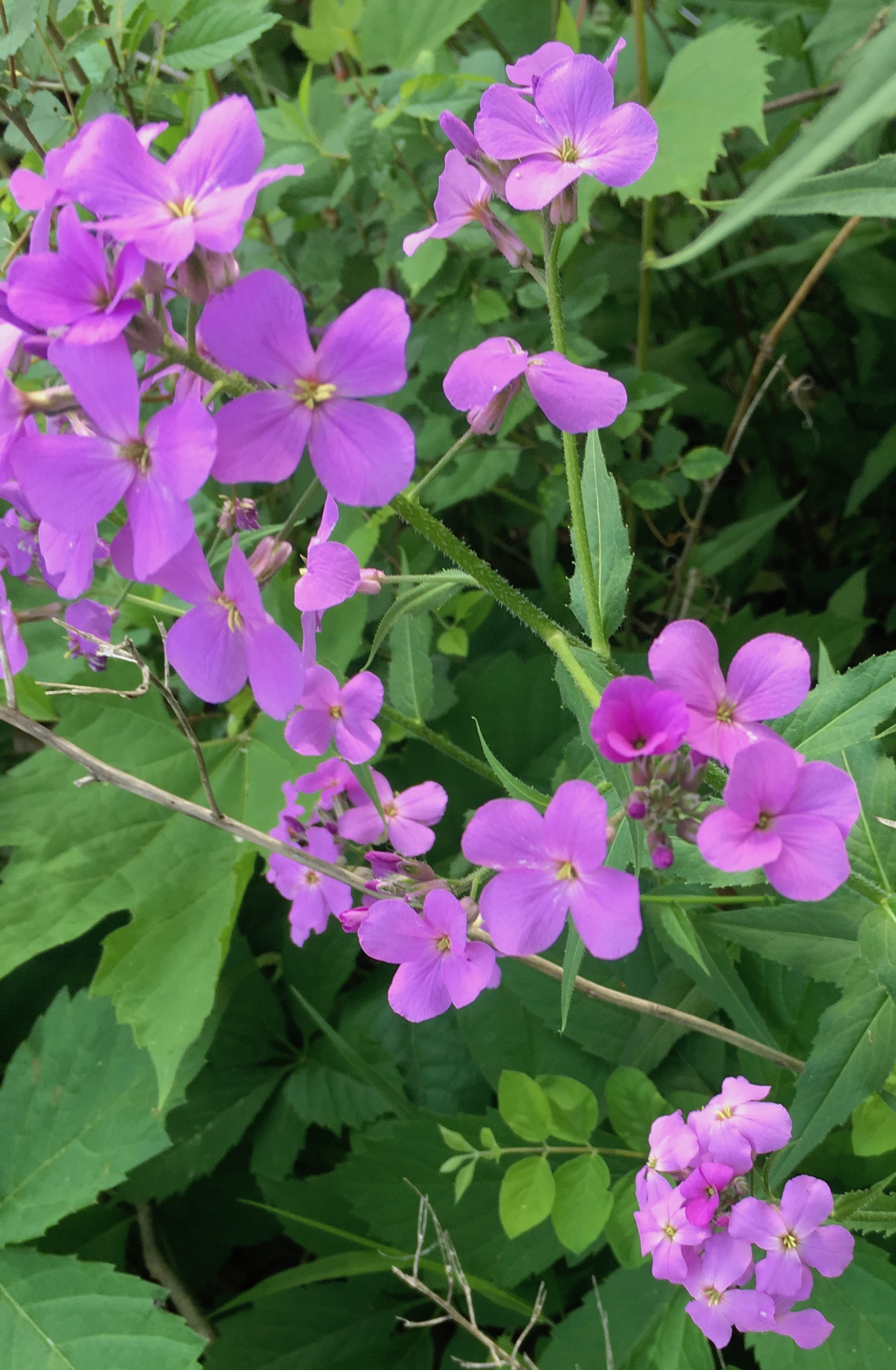 A closer look at a cluster of buds and pink flowers: 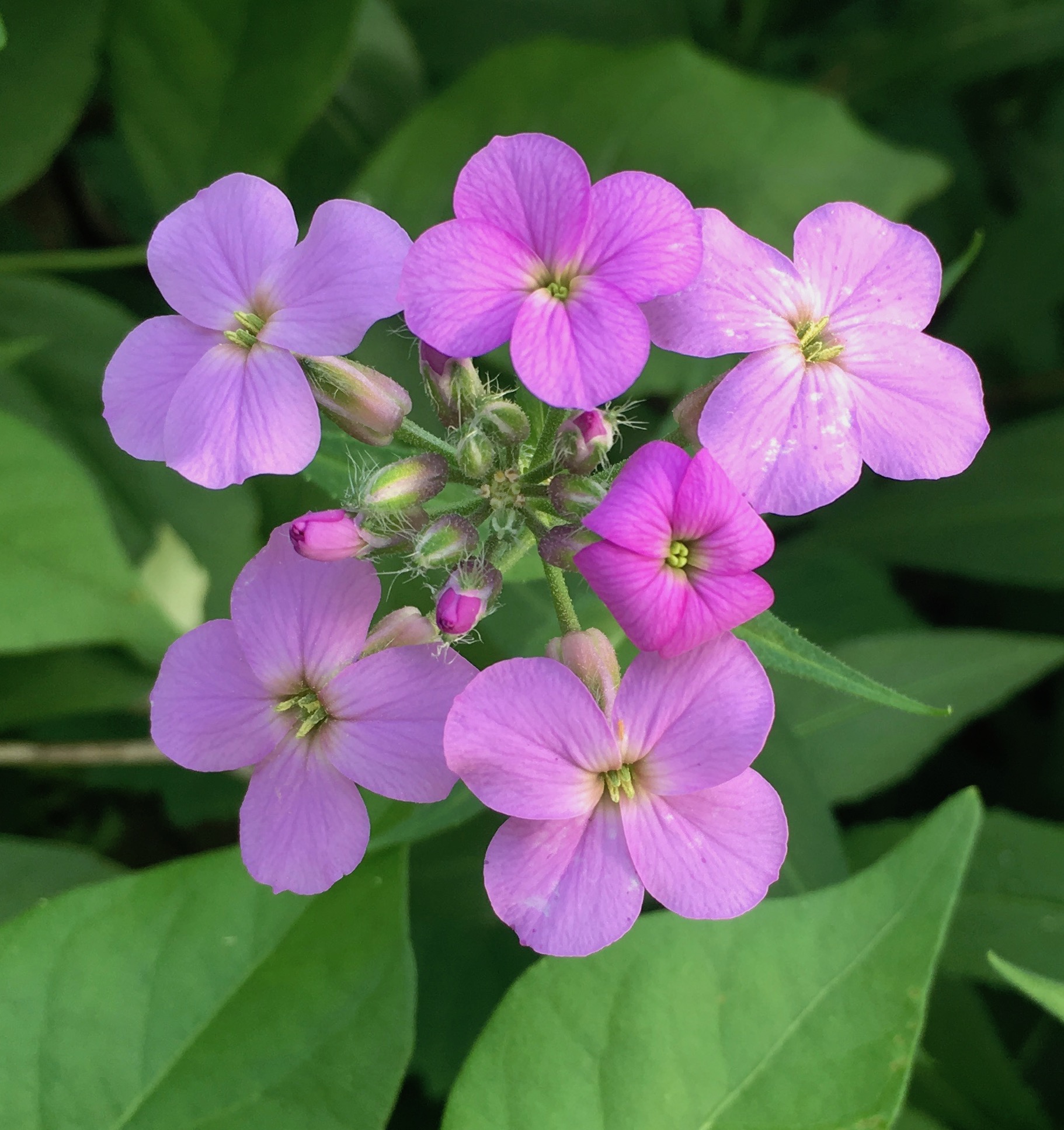 Here's a plant with white flowers: 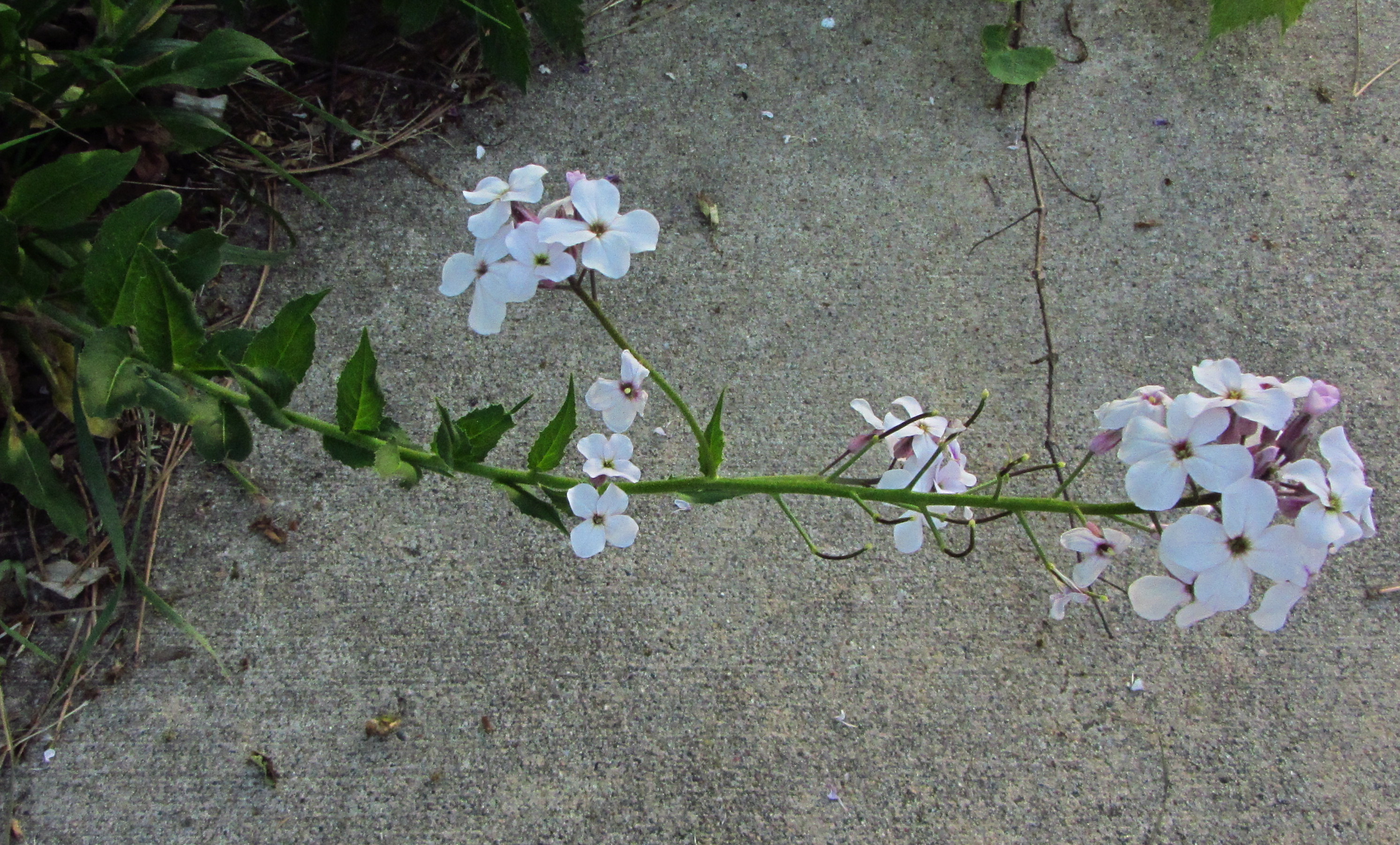 A small group of plants in this colony had white and pink flowers. I've rarely seen this color combination elsewhere. 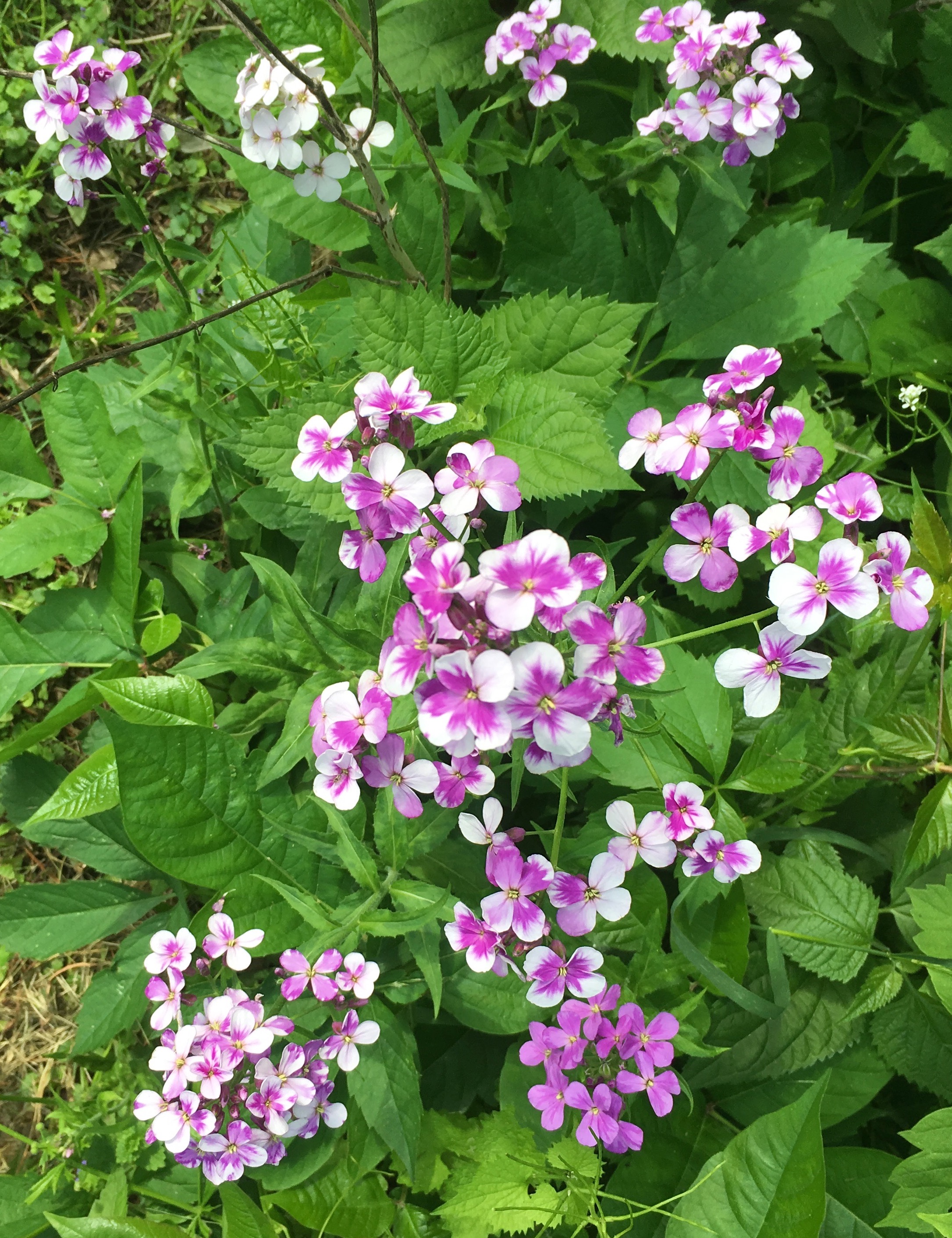 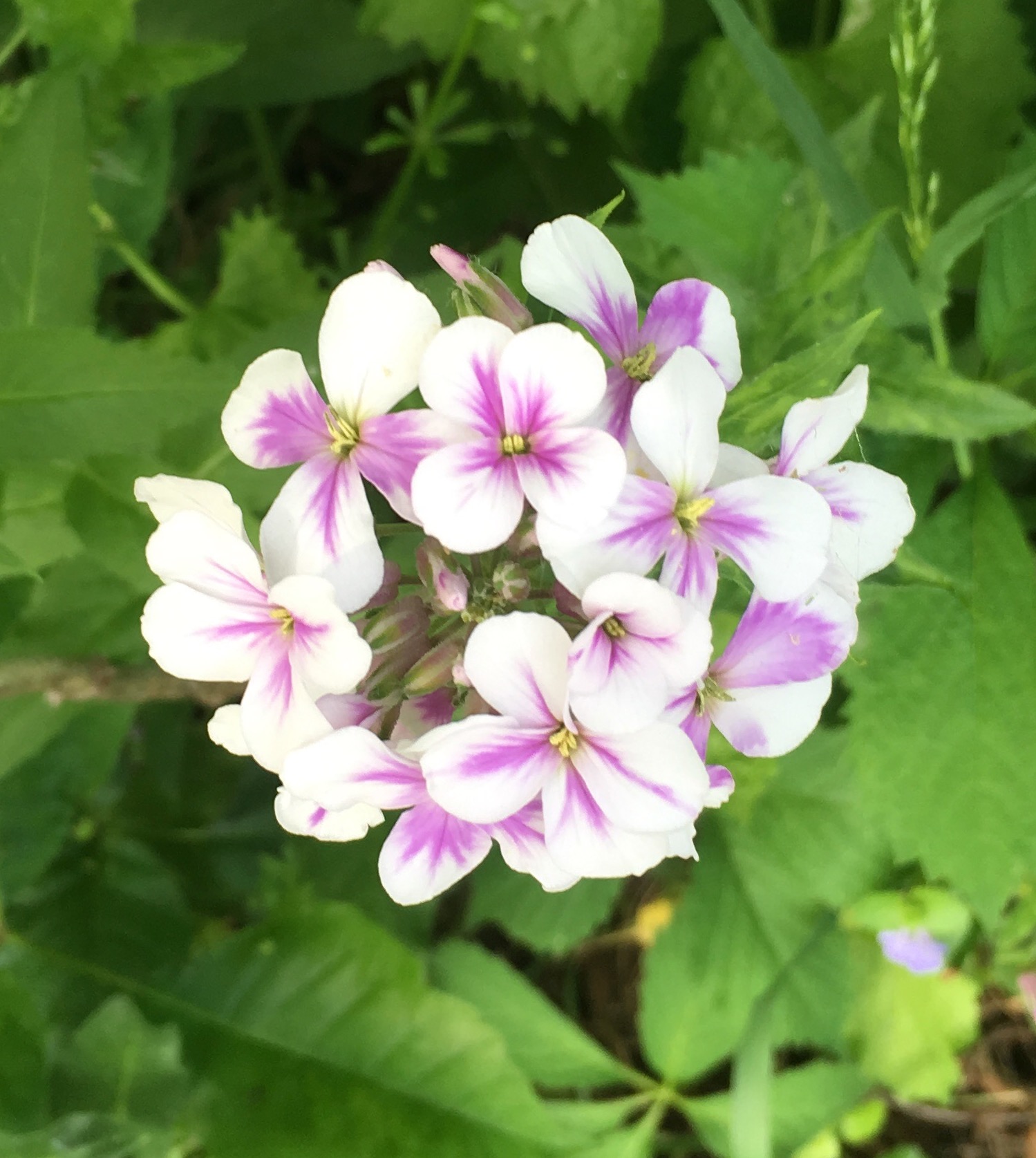 The large leaves near the bottom of the frame are part of a wild grape vine: 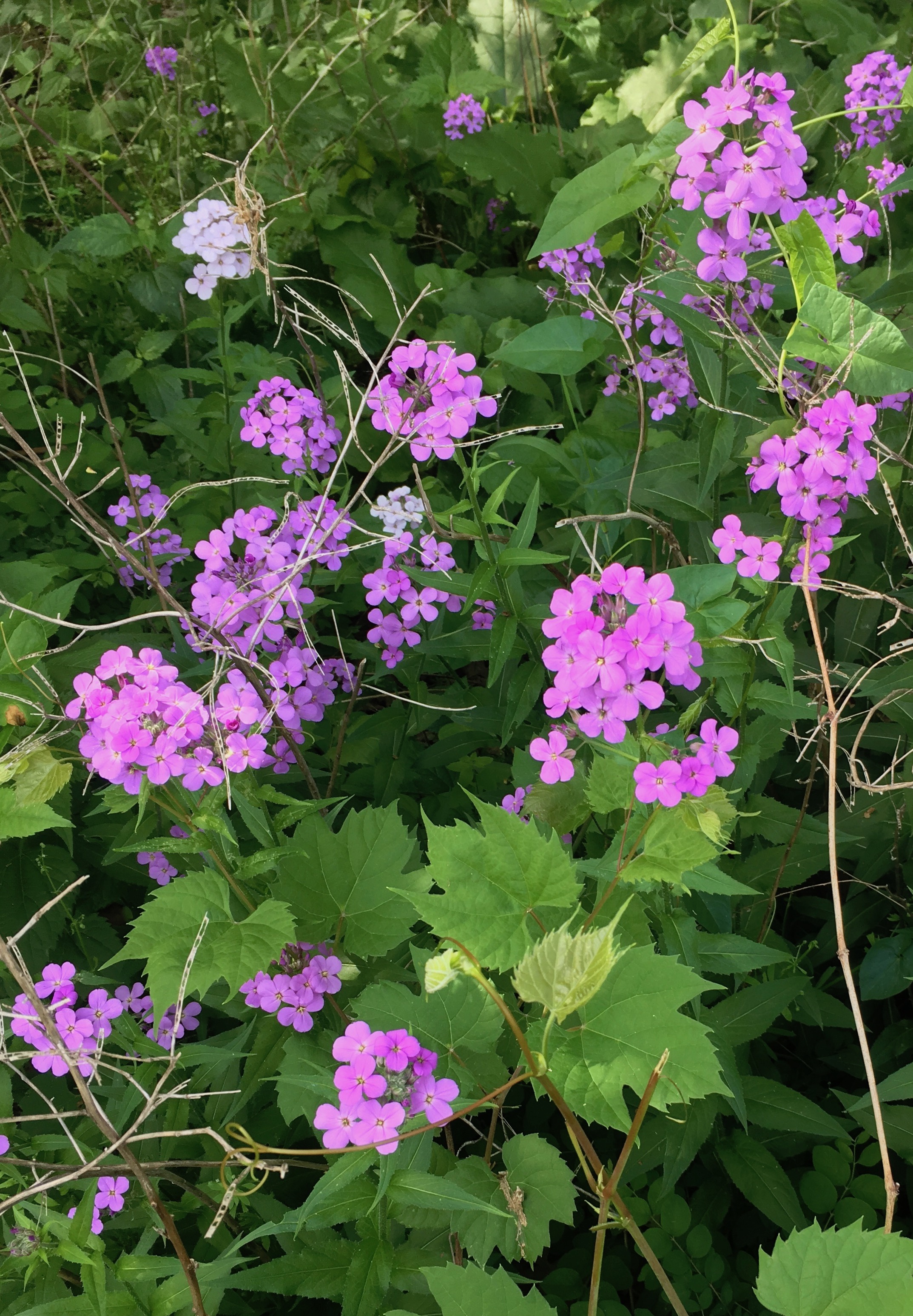 The light is bad in this picture, but I'm including it as a reminder to watch where you step when you are wildflower spotting. That's poison ivy near the bottom of the frame. Behind the Dame's rocket you can see lots of foliage for white snakeroot, a native plant that will bloom later this summer. White snakeroot is harmless, as long as you don't drink milk from cows that have grazed on it. 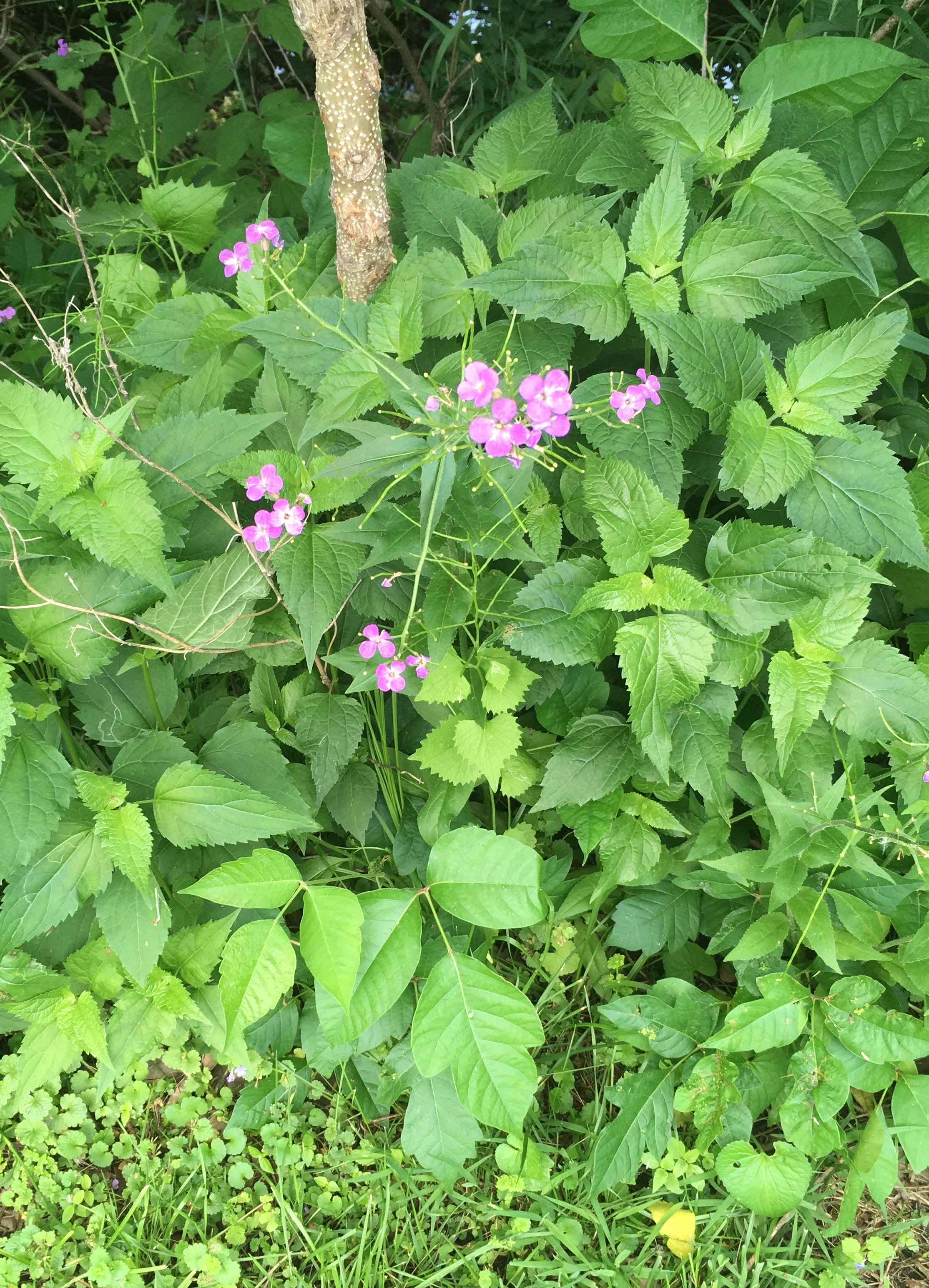 Minnesota Wildflowers describes the fruit of Dame's rocket as "a thin pod about 4 inches long, spreading to ascending, straight to curved, and containing a single row of seeds. The pod bulges slightly where the seeds are." Here's a dame's rocket plant that has gone to seed. 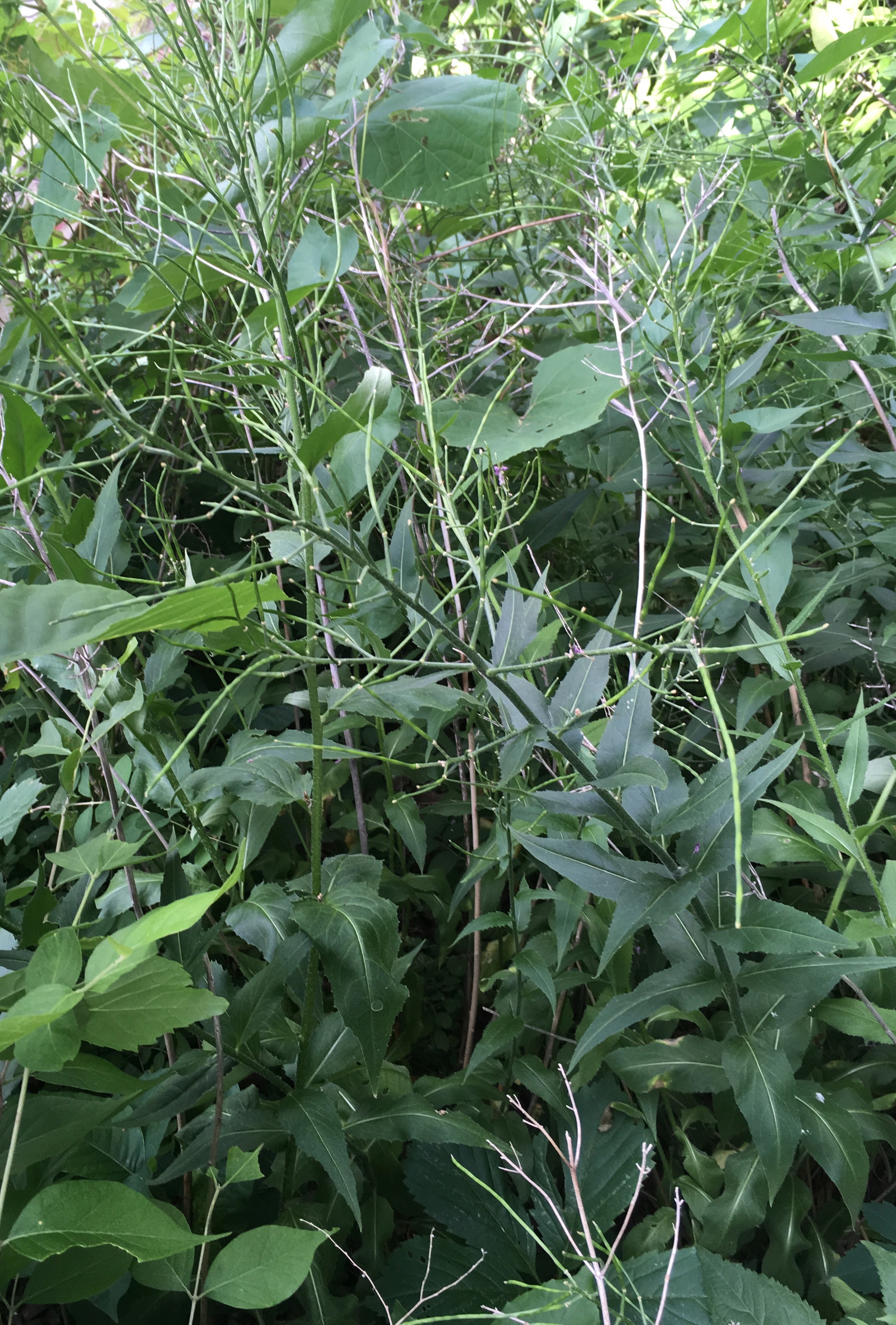