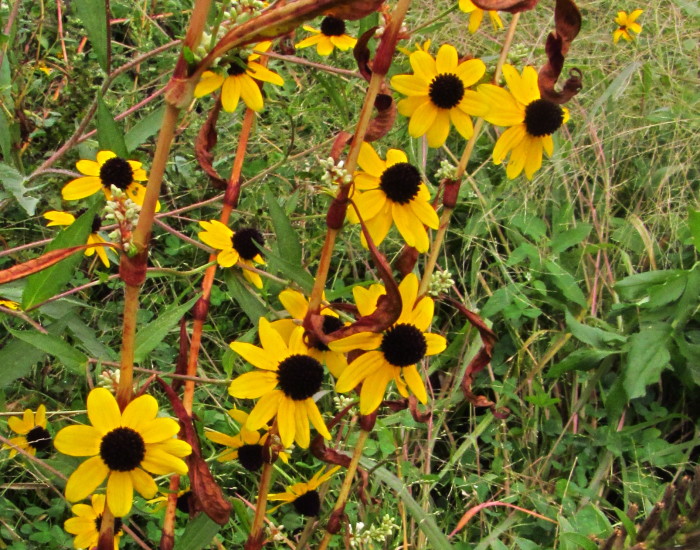 A surprising number of wildflowers are still blooming in central Iowa, thanks to unseasonably warm weather for most of the autumn, with no hard frosts yet. This week's featured plant is brown-eyed Susan (Rudbeckia triloba), which is native to most of the United States east of the Rocky Mountains. Although it's not a rare plant, black-eyed Susan is much more prevalent.

The Illinois Wildflowers website explains, "Brown-Eyed Susan can be distinguished from similar species by the smaller size of its flowerheads and the smaller number of ray florets per flowerhead. It is usually more tall and bushy than Rudbeckia hirta (Black-Eyed Susan), but it is shorter with fewer lobed leaves than Rudbeckia laciniata (Cutleaf Coneflower)." Iowa wildflower Wednesday profiled cutleaf coneflower here and black-eyed Susan earlier this fall.

The Minnesota Wildflowers website notes, "While a Minnesota species of special concern in the wild from loss of habitat to agriculture and invasive species, Brown-eyed Susan flourishes in gardens across the state. One of the best cut flowers around it can last for weeks in a kitchen vase." Gardeners may appreciate that this plant "attracts numerous nectar-seeking and pollen-seeking insects to its flowers."

I took all of the photographs enclosed below just off the Windsor Heights bike trail, behind the Iowa Department of Natural Resources building on Hickman Road. Whoever is maintaining this restored patch of native plants is doing a fantastic job. So many native species are thriving, including some wildflowers that are rare in Iowa, and I've hardly seen any invasive plants there all year.

Another large group of brown-eyed Susans. Some kind of boneset--possibly late boneset--is blooming in the background (small white flowers).

Brown-eyed Susans with a few common evening primrose flowers (the lighter yellow near the center of the frame). I think the plant with small white flowers in the upper right corner is late boneset.

More brown-eyed Susans in bloom with late boneset in the background.

Brown-eyed Susans to the left; some kind of white aster is blooming near the lower right corner. Some black-eyed Susans are in the right half of this shot.

This brown-eyed Susan plant is in the process of dying, but some flowerheads are still in full bloom.

I took this picture this morning; would not have expected to see so many flowerheads on a brown-eyed Susan plant in early November.