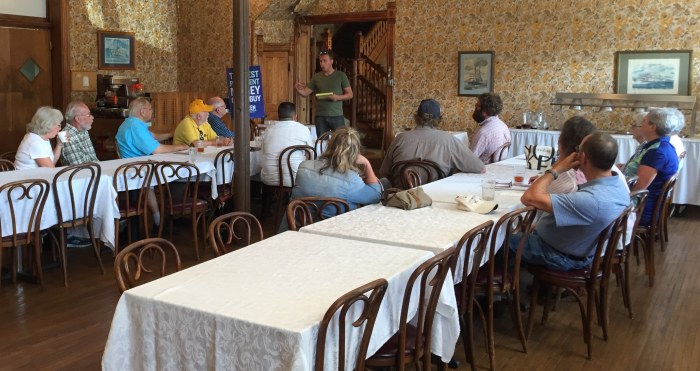 A look at Elizabeth Warren's brain trust in action

Charlie Mitchell is a food systems writer and researcher in Des Moines. -promoted by Laura Belin

Where does Elizabeth Warren come up with all of these plans? I’ll tell you where she got her new one, aimed at rural communities and agriculture: rural Iowans from every corner of the state.

I know because I observed a member of the brain trust in action. John Russell is an ex-farmer employed by the Warren campaign to drive his black Chevy Colorado all over Iowa. His team calls him “Roaddog.” Though based in Mason City, he crashes on couches with generous supporters most every day of the week.

Three times a month, Russell goes to a new town on his “Rural Listening Tour,” the most recent of which I attended with twenty Iowans in the dining room of Keosaqua’s historic Hotel Manning. After a spiel about Warren’s proposals to repair structural deficiencies in America’s economy and democracy—with emphasis on the campaign’s intention to enforce antitrust in the farm sector—Russell said, “I’m feeding your ideas directly up to HQ, so whatever you tell me has the potential to influence this campaign.”

With that, the floor opened. For ninety minutes we discussed struggling rural hospitals, the merits and drawbacks of Senator Warren’s plan to cancel student loan debt, the ethanol mandate, USDA conservation programs, and consolidation in the meatpacking industry. In the room were two doctors and two farmers. There was consensus as well as discord. Often when grappling with rural America’s intractable problems and uncertain future, one’s eyes would fall to the floor, eyebrows raised, head shaking side to side.

It’s no surprise that this style of policy development leads to bold, creative, and powerful ideas. Having spent five years studying the history and policy of American agriculture, I can say that Warren’s latest, published this morning, is no exception: the specificity of her plan for “a new farm economy” makes it singular among the primary hopefuls. Its boldness and originality advances the progressive farm policy conversation writ large.

If you’ll allow me a nerdy digression, I’ll explain why. Warren’s proposal takes a vital and successful conservation program currently at the margin and funds it commensurate with its urgent importance. You may ask, if these popular policies are so critical and beneficial for farmers and taxpayers, why aren’t they properly funded at the present moment? The answer, of course, is that these policies deliver no profit opportunities for the grain traders, chemical and seed dealers, meatpackers, equipment manufacturers, and millers who have had a stranglehold on farm policy since the USDA’s establishment in 1862.

In the hotel dining room, a farmer of Russell’s age—about 30—decried the lack of funding for the very programs Warren promised to expand fifteenfold. “What you’re saying literally makes me want to do a cartwheel right now,” Russell told the man, noting his input vigorously on a legal pad. The next day Russell would relay this information on a call with his national policy team.

Plans, of course, are just words. But in this case, the ends appear dwarfed by the means. Elizabeth Warren’s and John Russell’s ears are so close to the ground, they can probably taste the dust. A responsive pipeline between Iowa, Massachusetts, and DC is more than a model for campaigning: it’s a statement about how democracy might work. Perhaps— should we chose to vote it in—it foreshadows of the democracy we’ll one day enjoy.

Readers can contact Charlie Mitchell at charlie@tom.org. Warren’s latest agriculture policy document is available here. In March, she released her ideas for “leveling the playing field for America’s family farmers.”

Editor’s note: Bleeding Heartland welcomes guest posts related to the Iowa caucuses, including analysis of candidates’ policies or approach to campaigning. Please read these guidelines and contact Laura Belin if you are interested in writing.