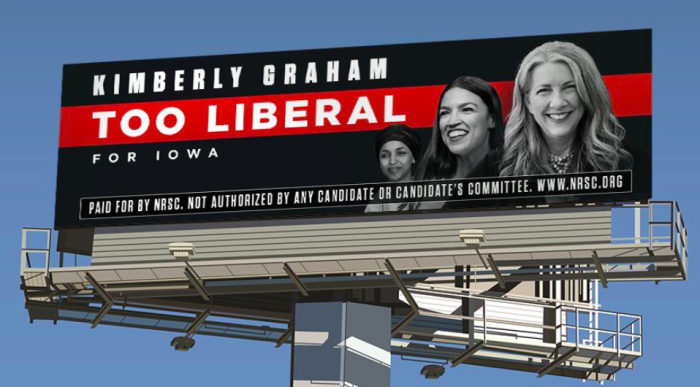 The National Republican Senatorial Committee put up a billboard on a busy Des Moines street this week, seeming to attack Democrat Kimberly Graham. It's part of a strategy to elevate the profiles of "lower-tier candidates" for U.S. Senate in states including North Carolina, Maine, Colorado, and Georgia, Nathan Gonzales reported for Roll Call on August 14.

NEW billboard in Iowa! @KimberlyforIowa encourages the Democrats' lurch to the left with her support of socialized medicine and the #GreenNewDeal. Her policies prove she is out of touch with voters. Iowans deserve better! #IAsen #iapolitics pic.twitter.com/1BX17G3D6X

The advertisements in other states have the same format, connecting the allegedly "TOO LIBERAL" Senate candidate to U.S. House Representatives Alexandria Ocasio-Cortez and Ilhan Omar, who have replaced House Speaker Nancy Pelosi as Republicans' favorite bogeymen for 2020.

Graham was was thrilled with the "free advertising," telling the NRSC, "It is good to know that you (or at least the corporate donors who currently own the @gop) perceive strong, progressive women like @AOC, @IlhanMN and myself as a threat." Of Joni Ernst's three declared challengers, only Graham supports Medicare for All (a single-payer health care system), and she used yesterday's news to promote her progressive stands.

I am a progressive, and I'm not apologizing for it.

I support Single Payer Healthcare, and I'm not backing down.

I believe Climate Change is a crisis, and I'm going to do something about it.

“The Democratic Senate primary continues to march further to the left, as Kimberly Graham and the other candidates support a socialist agenda,” NRSC spokesman Nathan Brand said. [...]

Graham was targeted because of her position on the Green New Deal, Brand said. The Green New Deal is a proposed economic stimulus package aimed at reducing the effects of climate change and economic inequality.

“Our policy has been that no Democrat should receive a free pass in their party’s race to the left,” Brand said.

“The billboard is to draw attention to how liberal Kimberly Graham is, and one way of doing that is connecting her with two of the most outspoken socialists in Washington right now — AOC and Omar,” he said.

Gonzales stated the obvious: Washington Republicans are trying to boost their preferred opponents, hoping to end up with a weaker Democratic nominee. Gonzales doubts the tactic will work.

Paying for billboards is just a drop in the bucket in the context of multimillion-dollar campaigns, but there’s still time for Republicans to make that splash next year before the primaries. For now, billboards are very unlikely to make the difference in any of these races and are more of an annoyance until there’s more money behind the strategy.

That's certainly true. I would guess a secondary goal for the NRSC is to force the front-runners in targeted states (including Theresa Greenfield, the establishment favorite in Iowa) to spend more of their campaign funds before next year's primary. Besides Greenfield and Graham, Eddie Mauro is running for Senate, and Michael Franken is likely to join the field soon.

I believe that in most cases, getting through a tough primary produces stronger general election candidates than coasting with little competition. So the NRSC is probably wasting its money here.

The ad campaign could even backfire. Ernst plans to campaign for re-election against an imagined socialist threat. By labeling Graham a socialist, Republicans may inadvertently help Greenfield position herself as a middle-of-the-road Democrat.

Any comments about the Senate race are welcome in this thread.