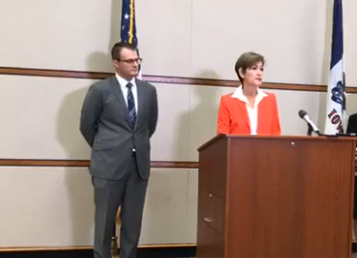 In addition, the governor's office has not posted video of Reynolds answering questions from journalists on any publicly accessible platform since December. That's a departure from past practice.

Governor Terry Branstad held Monday morning news conferences almost every week during his tenure. Staff put the full videos up on YouTube for anyone to watch.

After her mentor's departure for China made her governor in May 2017, Reynolds initially continued to give credentialed reporters frequent opportunities to ask her questions, though not every week and not always at the same time. Those events were routinely streamed live on her official YouTube channel. The videos, typically between 20 and 30 minutes long, included the governor's back-and-forth with reporters.

Reynolds had held 20 news conferences in 2018 when she suspended the practice last July as she began to focus more on getting elected. Staff said then that the governor might schedule fewer press conferences for the duration of the campaign. In fact, she did not hold another one until after the November election. She also avoided meeting with newspaper editorial boards, thereby avoiding unscripted discussions of her record or future plans.

During the first televised debate between Reynolds and Democratic challenger Fred Hubbell last October, panelists asked if the candidates would commit to holding weekly news conferences in the future. Reynolds responded, "I do it all the time."

During their third debate, Hubbell asserted the governor had not promised to take questions from the media every week. Reynolds countered (around the 34:00 mark of this video), "I said that I will hold weekly press conferences." When moderator David Nelson of KWQC-TV noted that Reynolds had not committed to doing so every week, she objected, "No, I did," adding that the candidates had been asked in their first debate, "If you're elected, are you going to hold weekly press conferences, and I said absolutely, just as I've done. [...] If there's any ambiguity, I will."

After winning the election, Reynolds held three news conferences during the remainder of 2018.

She took questions on November 13 in Ottumwa, a two-hour drive each way from where all the statehouse reporters are based. No footage was shared on the governor's YouTube channel. The video posted to the governor's official Facebook page showed only the prepared remarks about National Registered Apprenticeship Week by Reynolds, Lieutenant Governor Adam Gregg, and three people associated with Jobs Corps.

Nothing from her November 20 news conference was posted to YouTube. The Facebook video showed only the "turkey pardon" ritual outside the governor's official residence in Des Moines. None of the questions reporters asked or answers from Reynolds are available online.

The last Reynolds news conference to be live-streamed and posted in its entirety on YouTube happened on December 11.

In Orwellian fashion, the governor's public schedules still refer to "weekly" press conferences, even though Reynolds has not held one most weeks in 2019. None of the fourteen held so far were posted on her YouTube channel. When her official Facebook page carried footage, only the prepared remarks could be viewed.

During the busy first month of the year, when the state legislature reconvened and Reynolds laid out her agenda in a major address, the governor held just one news conference. No footage is available online.

Reynolds held two press conference the following month. I found no footage from February 5. A Facebook video from February 27 ended before the reporter questions.

Note: the governor's public schedule mentioned a "weekly press conference" on February 19. However, multiple eyewitnesses to that bill signing in the state capitol's rotunda confirmed that Reynolds did not take questions from the media after the photo opportunity.

Reynolds held three news conferences in March. The first focused on restoring voting rights to Iowans with felony convictions. The official video did not include any Q&A. The governor didn't initially schedule a conference for the next week but added a briefing in Council Bluffs to discuss extensive Missouri River flooding. Again, only prepared remarks were available on Facebook. A video posted on March 28 showed brief remarks from Reynolds during a visit to Cedar Rapids. Her original schedule for that week did not reference any press conference.

Similarly, Reynolds didn't plan to hold a press conference the first week of April, but added a joint appearance with Missouri's governor in Council Bluffs to discuss the continued flooding. In accordance with the new normal, the official video cut off after brief opening remarks.

Reynolds held two press conferences later the same month. One focused on flooding, and the next played out like an infomercial for Google Home and Amazon Echo. In both cases, the official video showed only the speakers' opening remarks.

The governor held no news conferences in May, her public schedules and Facebook page indicate. She did occasionally answer questions from journalists, but those informal "gaggles" did not provide the same opportunities for the media to bring up a wide range of topics. Nor did they last as long as the press conferences of years past. Nor were they filmed or published online, unless one of the participating reporters posted a snippet of the Q&A on a social media feed or as part of a news report.

Summer brought more of the same. Reynolds held two news conferences in June. Good luck finding out what transpired there if the governor's staff don't consider you a "credentialed member of the media." The official Facebook page showed prepared remarks about public-private partnerships and an initiative "to showcase all the great things Iowa has to offer visitors & residents."

The sole news conference Reynolds held in July highlighted workforce development. What happened after the opening remarks is anyone's guess.

Reynolds held press conferences two weeks in a row this month. Her Facebook page showed a 44-second clip of the governor proclaiming August 13 "Iowa Farm Bureau Day" at the Iowa State Fair, and seven and a half minutes from this week's event, introducing Maj. Gen. Benjamin J. Corell as Adjutant General for the Iowa National Guard.

Although Reynolds did take questions on both those occasions, the exchanges were largely concealed from public view. For instance, Stephen Gruber-Miller quoted Reynolds about possible gun regulations for an August 20 story for the Des Moines Register. In the old days, any reader wanting to learn more could go to the governor's YouTube channel and listen to the whole segment to better understand the context and hear comments that didn't make it into the newspaper. Now that avenue is closed.

Communications staff for Reynolds did not respond to Bleeding Heartland's inquiry in July about why her office no longer publishes the full video from news conferences.

Notably, practices changed after the governor's 2018 campaign manager Sara Craig Gongol became her chief of staff. Gongol's past work was on campaigns or in political consulting, where tightly controlling the message at all times is a top priority. She came to her current job with no background in state government and apparently little regard for the tradition Governor Bob Ray established, which Governors Branstad and Tom Vilsack followed.

Reynolds' new public relations manager, Heather Nahas, should push for a more accessible administration and for making "weekly press conferences" more than an empty phrase. But she comes from the corporate world, where top executives don't regularly take unscripted questions about whatever journalists might be working on.

In theory, media organizations could band together to film and publish complete footage from every Reynolds press conference and gaggle. But Iowa has no statehouse press association, and I don't know whether any individual outlet would be willing to take this on. The credentialed reporters already are able to record Reynolds in these settings, so they are not shut out like other constituents are.

UPDATE: According to the latest public schedule announced on August 23, the governor will hold a press conference on August 27. That will make three weeks in a row. Perhaps the arrival of Nahas marked a turning point toward keeping that campaign promise.

Meanwhile, Republican strategist David Kochel provided a window on how Reynolds' team views the media and the purpose of a news conference. Kochel holds no formal government position but worked closely with Gongol for years and often pushes the Reynolds administration line when battling with the governor's critics on Twitter. He is much more combative toward journalists than the governor's communications director Pat Garrett. For example, Kochel discouraged reporters from investigating why Reynolds fired Jerry Foxhoven as Iowa Department of Human Services director (see his numerous mocking or belligerent tweets linked near the end of this post).

Responding to my analysis of the governor's media availabilities, Kochel depicted Reynolds as very accessible, noting she held two gaggles and radio call-ins this week as well as a press conference. When I asked why he thought staff don't post such videos online, Kochel replied, "Because it's dumb."

Did he mean it's dumb for Iowans to expect transparency in the governor's interactions with the media? Or dumb for political operatives running her office to post video online, in case she makes some mistake? Kochel shot back, "These are on-the-record press conferences covered by the credentialed media. Take your issues up with them. It’s not the Office of the Governor’s job to archive the video just because Laura Belin will be offended if they don't."

Another Twitter user chimed in to say that in his experience, access to Branstad's news conferences was "incredibly helpful" to Iowa reporters not located in Des Moines. Kochel was dismissive.

There is no shortage of video and sound available on the website and social media. You would have no trouble covering what the Governor scheduled for that week. She is also incredibly accessible to journalists from the far corners of Iowa when they ask for something.

In other words, reporters should let government officials direct their story selection by working with the snippets of audio and video that Reynolds and her team want in the news.

Hundreds of Iowa media outlets don't have a reporter regularly stationed in Des Moines. When Reynolds speaks to the press, journalists doing their jobs want to hear what she was asked and how she answered. Often that material is more newsworthy than the prepared remarks the governor's staff put up on social media feeds.

LATER UPDATE: The August 27 news conference illustrated the problem well. No footage is available on YouTube. The video uploaded to the governor's Facebook page shows only prepared remarks by Reynolds and an instructor about work-based learning opportunities.

Reynolds later answered some questions about a hot topic: the Trump administration's policy of granting waivers to oil refineries, undermining the federal Renewable Fuels Standard that is a top priority for corn growers and ethanol producers. O.Kay Henderson reported some of the governor's comments in this story for Radio Iowa, but other journalists and Iowans affected by the issue would benefit from being able to hear the entire exchange.