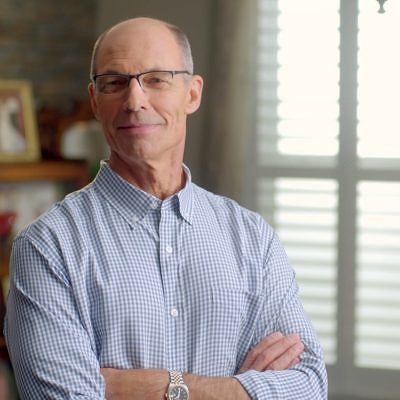 A fourth Democrat officially entered the U.S. Senate primary this morning. Retired three-star Admiral Mike Franken introduced himself to voters by recalling his opposition to the Iraq War nearly seventeen years ago.

Senator Joni Ernst highlighted her long military career from her first day as a candidate for federal office. She repeatedly alluded to her National Guard service while running for Senate in 2013 and 2014.

Franken's first campaign video also emphasizes his military background, but with a twist: he talks about refusing to follow the examples of senior officers, who went along with what politicians wanted.

My transcript of the clip, narrated by Franken:

For almost 40 years in the Navy, I had to make a lot of tough calls. While commanding a destroyer, participating in nine of eleven named operations since September 11, and leading U.S. forces in Africa to fight the pirates and terrorists as a three-star admiral.

But my hardest decision was when I was just a young captain in late 2002.

The Bush White House ordered the Pentagon to plan the invasion of Iraq. I represented the U.S. Navy and was the most junior person at the table full of generals and politicians.

I was trained to not bow to political pressure and to do what's right.

When the vote came, we had a choice between three invasion plans. One thing was clear: the occupation of Iraq would be a disaster. I alone in the room voted for a fourth option: no.

Whether working as a boy in the rolling fields of Sioux County, or serving watch on the high seas, I was used to standing alone. And that day I did.

I wasn't surprised that everyone else in the room did the White House's bidding. But like millions of other Americans, I was disappointed when Congress fell in line too.

I'm Michael Franken, and I'm running for the U.S. Senate, because today, Washington is even worse. The Republicans are afraid to ever stand up to Donald Trump. And DC Democrats aren't bold enough to confront the climate crisis, the health care industry, and Wall Street.

Join me, because now more than ever, Iowans need a senator who will go against the grain in Washington to do what's right for Iowa.

The video includes a standard disclaimer for campaign ads: "Michael Franken was a member of the United States Navy. Use of his military rank, job titles, and photographs in uniform does not imply endorsement by the Department of the Navy or the Department of Defense."

An unspoken subtext is that "DC Democrats" mostly lined up behind Theresa Greenfield soon after she announced her Senate candidacy in June. J.D. Scholten and Stacey Walker have said that when they were considering this race, representatives of the Democratic Senatorial Campaign Committee discouraged them from running. In a telephone interview with Bleeding Heartland earlier this month, Franken declined to comment on whether DSCC leaders had urged him not to challenge Ernst. But he said he'd been encouraged to run against Senator Chuck Grassley in 2022.

While it may seem strange to talk about events from 2002 when launching a campaign this cycle, data from recent elections indicate that vast majority of voters in Iowa's June 2020 Democratic primary will be over age 50. In other words, most Iowans who will select the nominee to face Ernst next year are old enough to remember the debate over the Iraq War and the capitulation of the Washington establishment.

As the only veteran in the Democratic field, Franken will likely emphasize his ability to match Ernst on military service. He told Iowa Starting Line's Elizabeth Meyer in June, "I bring ideas, which sometimes turn people off, but I tell you what, I’m not an empty suit. In the general election, I’d beat Joni."

Franken has attended some Democratic gatherings this summer, but his first public event as a Senate candidate will be this evening in Orange City (Sioux County). His campaign kickoff is scheduled for August 28 at Buffalo Alice in Sioux City.

Any comments about the Senate race are welcome in this thread. To follow all of the candidates online:

“I made a lot of tough calls during my time in the Navy, and I’m not afraid to stand up for the proud progressive principles that Iowa Democrats share,” said Franken. “But in Washington, Republicans like Joni Ernst and Mitch McConnell never stand up to Donald Trump, and too many DC Democrats aren’t championing bold solutions for the climate crises, the cost of health care, and Wall Street greed.”

Mike Franken was born and raised in rural Northwest Iowa. He spent his formative years working on farm equipment and trucks in Lebanon Farm Shop alongside his father. Mike was a hired farm hand, welder, construction worker, truck driver, and worked at Sioux Preme Packing Company to pay for college.

Winston S Churchill, commanded a squadron of ships and an international task force at sea, and served as the ground task force commander for the 4,000 US personnel on the continent of Africa. He was the first director of the POW/MIA defense agency tasked to find and identify fallen servicemembers worldwide. Franken spent years in senior policymaking, strategy, and planning roles for the Defense Department. As chief of legislative affairs for the Navy, he oversaw the authorization of a $150 billion budget. He retired from military service as a three-star admiral in 2017.

Even while serving on the other side of the world, Iowa has always been on Mike’s mind and in his heart. Shortly after his retirement from the military, Mike moved back home and now lives in Sioux City, Iowa.

Mike and Jordan, his wife of 30 years, have two children.