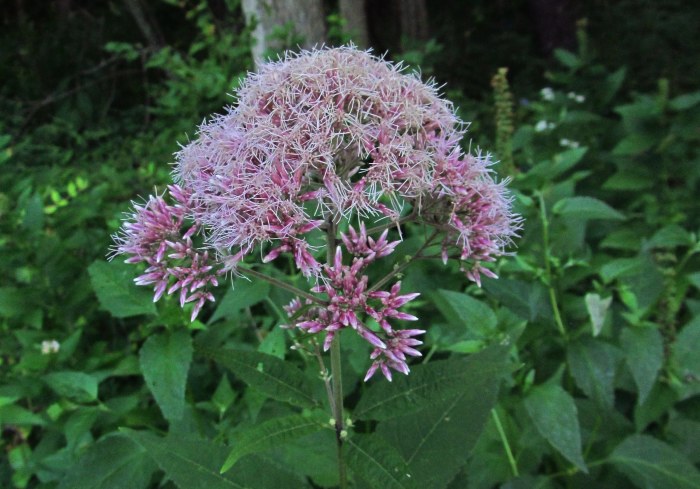 I've been meaning to feature Joe-Pye weed for years, but rarely managed to catch it at the peak of its blooming period. This summer, I realized a small colony is thriving across the street from my home. Somehow, I've missed it before.

Several Joe-Pye weed species are widespread in Iowa. For reasons explained below, I'm confident these plants are Sweet Joe-Pye Weed (Eutrochium purpureum), which is native to much of the U.S. east of the Rocky Mountains.

Joan Lee Faust wrote long ago in the New York Times about the origin of these plants' common name.

As the story goes, there once was an Indian medicine man named Joe Pye who used concoctions from a wild plant found growing in the nearby woods to cure typhoid fever. His brew is said to have halted an epidemic that raged in Colonial Massachusetts. Hence this local plant became forever known as joe-pye weed.

This species is also known as sweet scented Joe Pye weed, and the Illinois Wildflowers site explains, "The foliage may be vanilla-scented, although this varies with the local ecotype." I didn't notice any scent when photographing these plants or even when crushing a few leaves.

Sweet Joe-Pye weed thrives in partly-shaded habitats, including "open woods, woodland edges, thickets, wet meadows, [and] ravines," the Minnesota Wildflowers site notes. The colony in my corner of Windsor Heights is on a woodland edge. 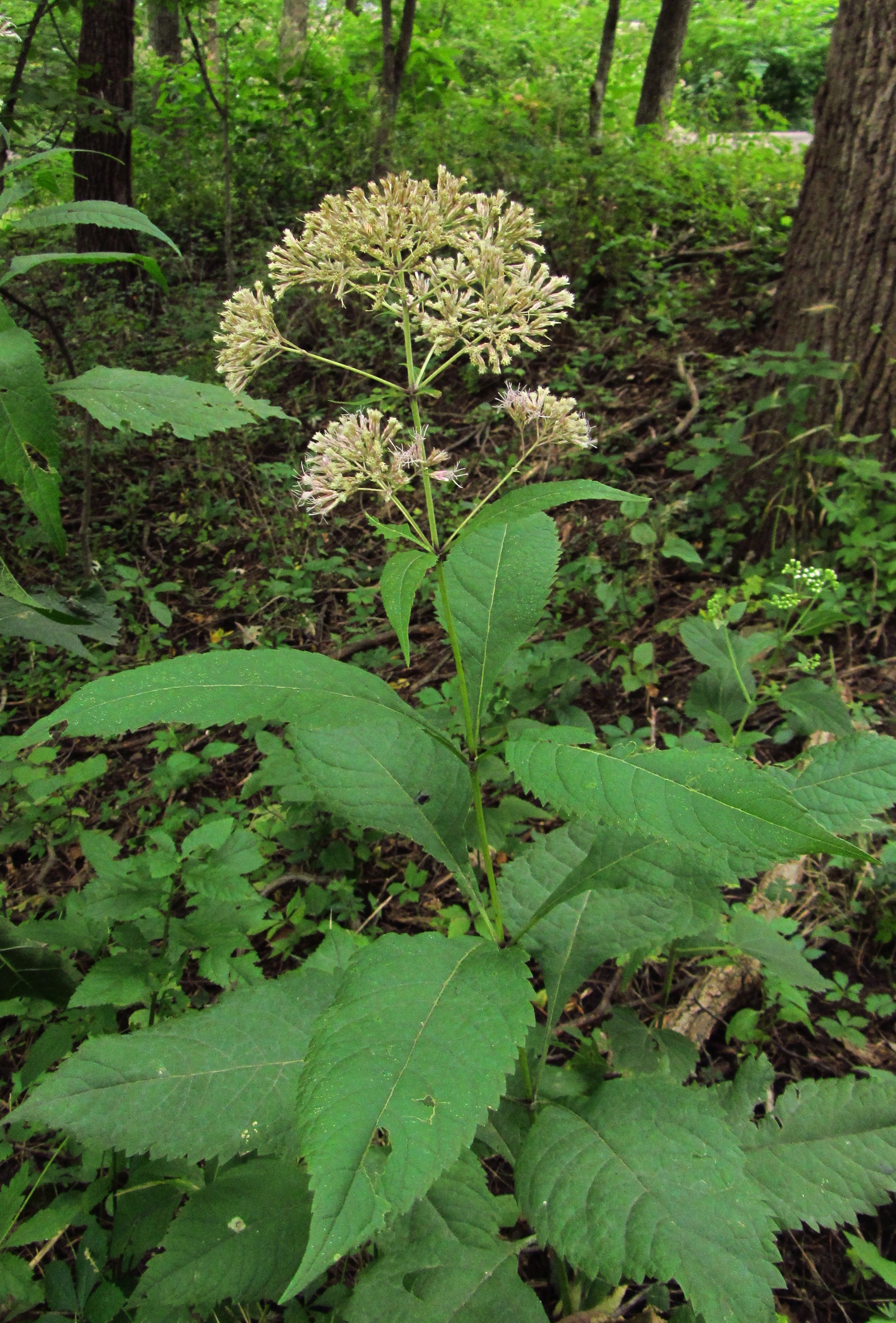 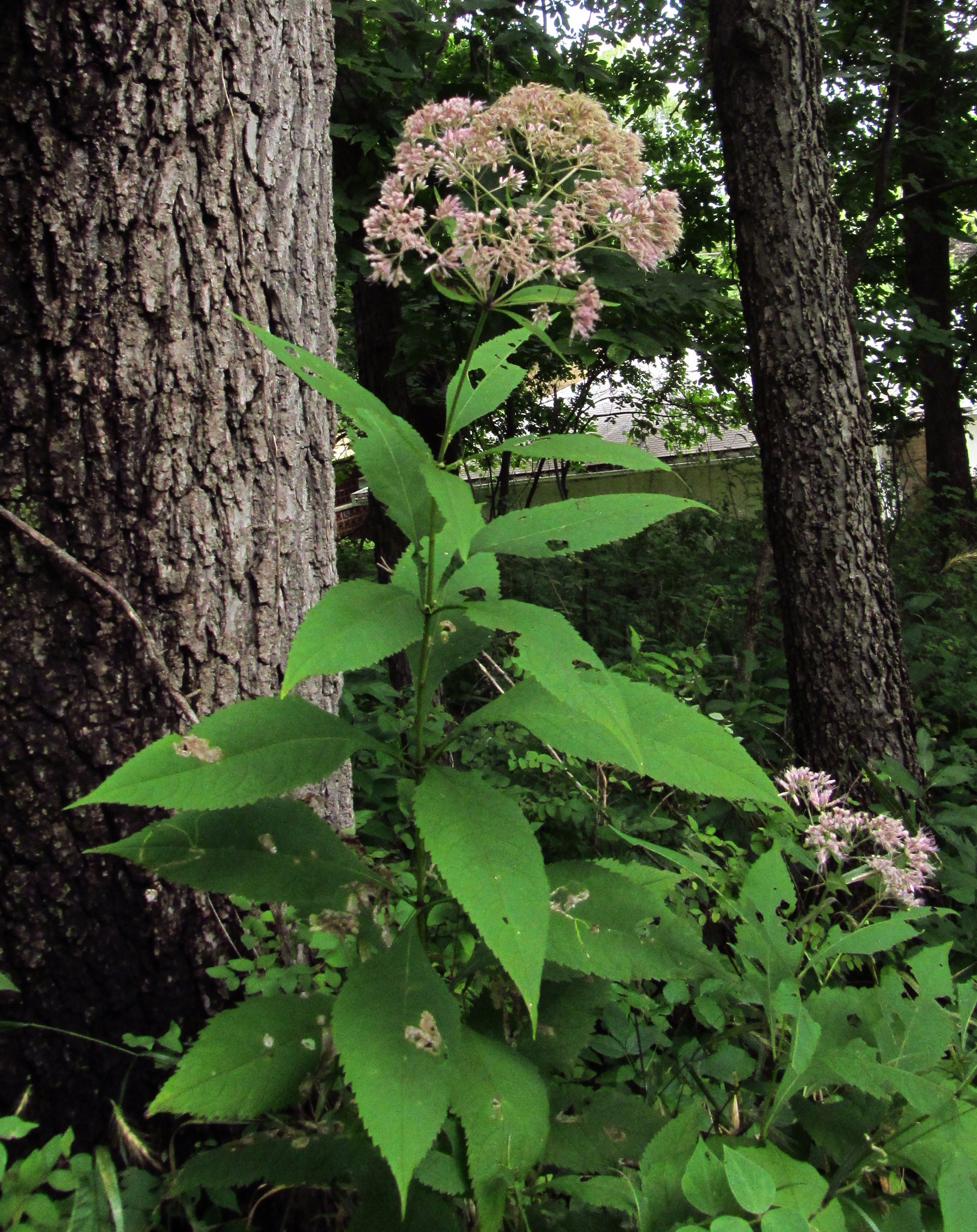 Illinois Wildflowers provides these tips for distinguishing the related species.

In the next two pictures, you can see the purple area where the mostly-green stem meets the leaf petioles, and whorls of four leaves (first shot) and three leaves (second shot). 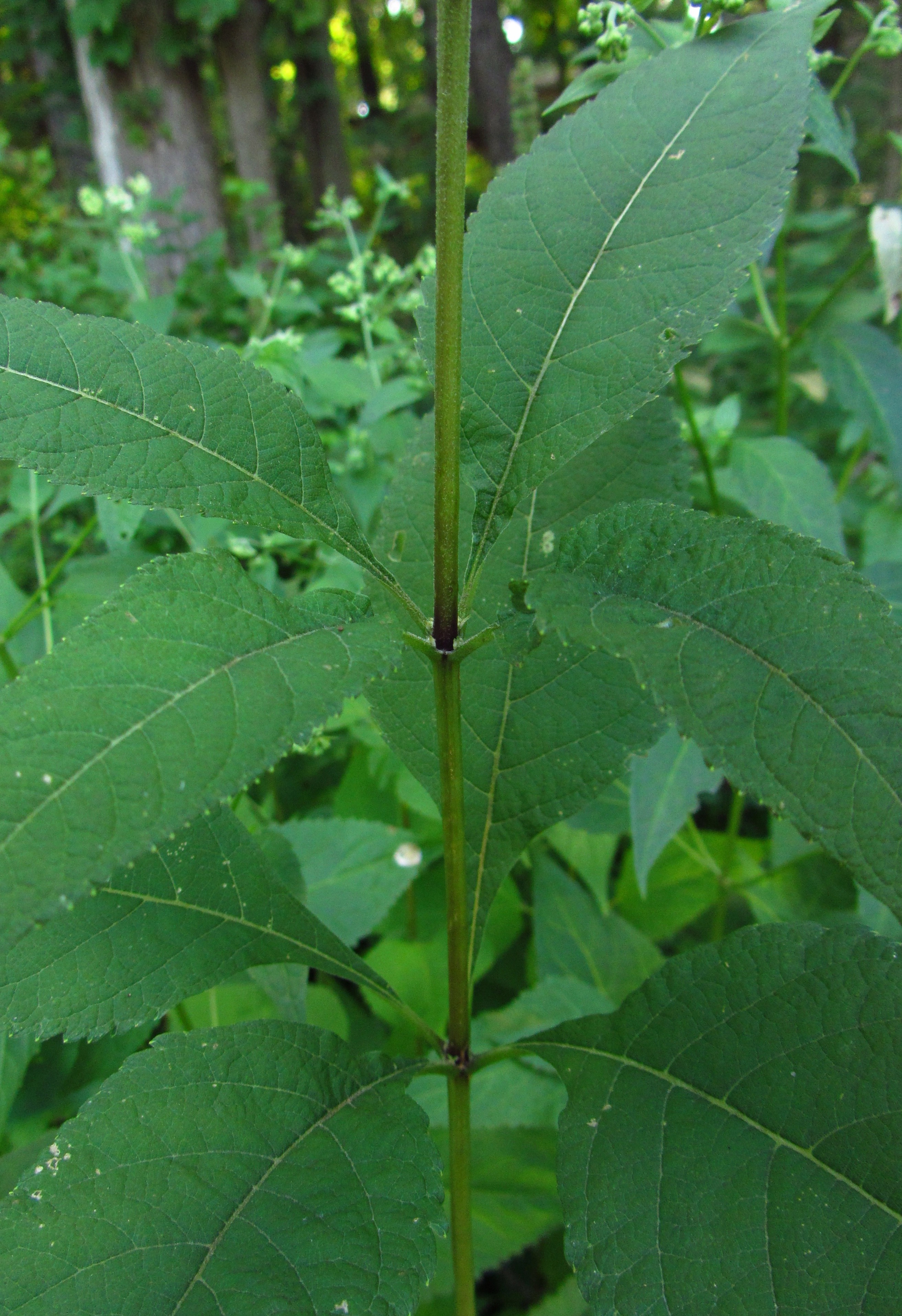 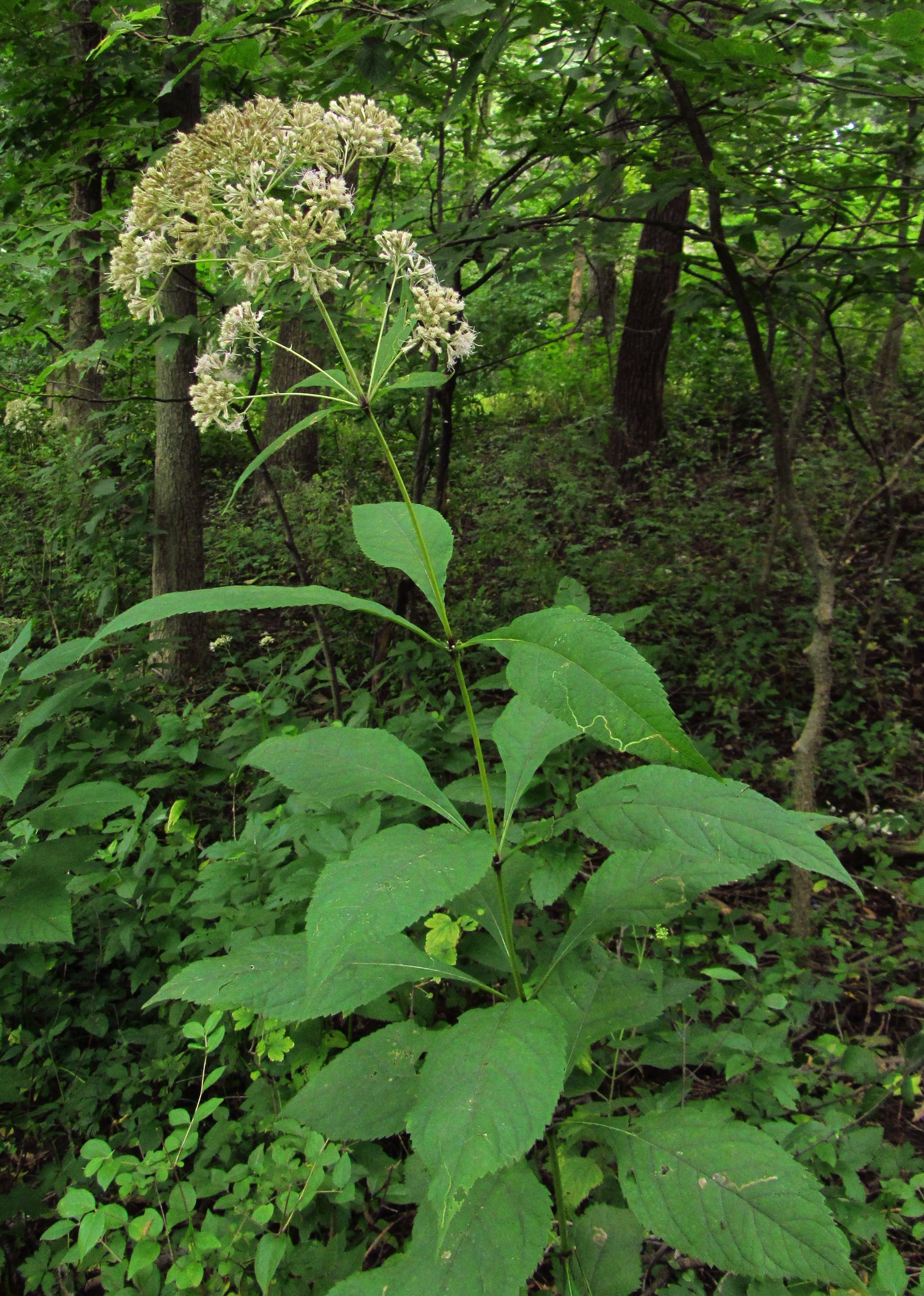 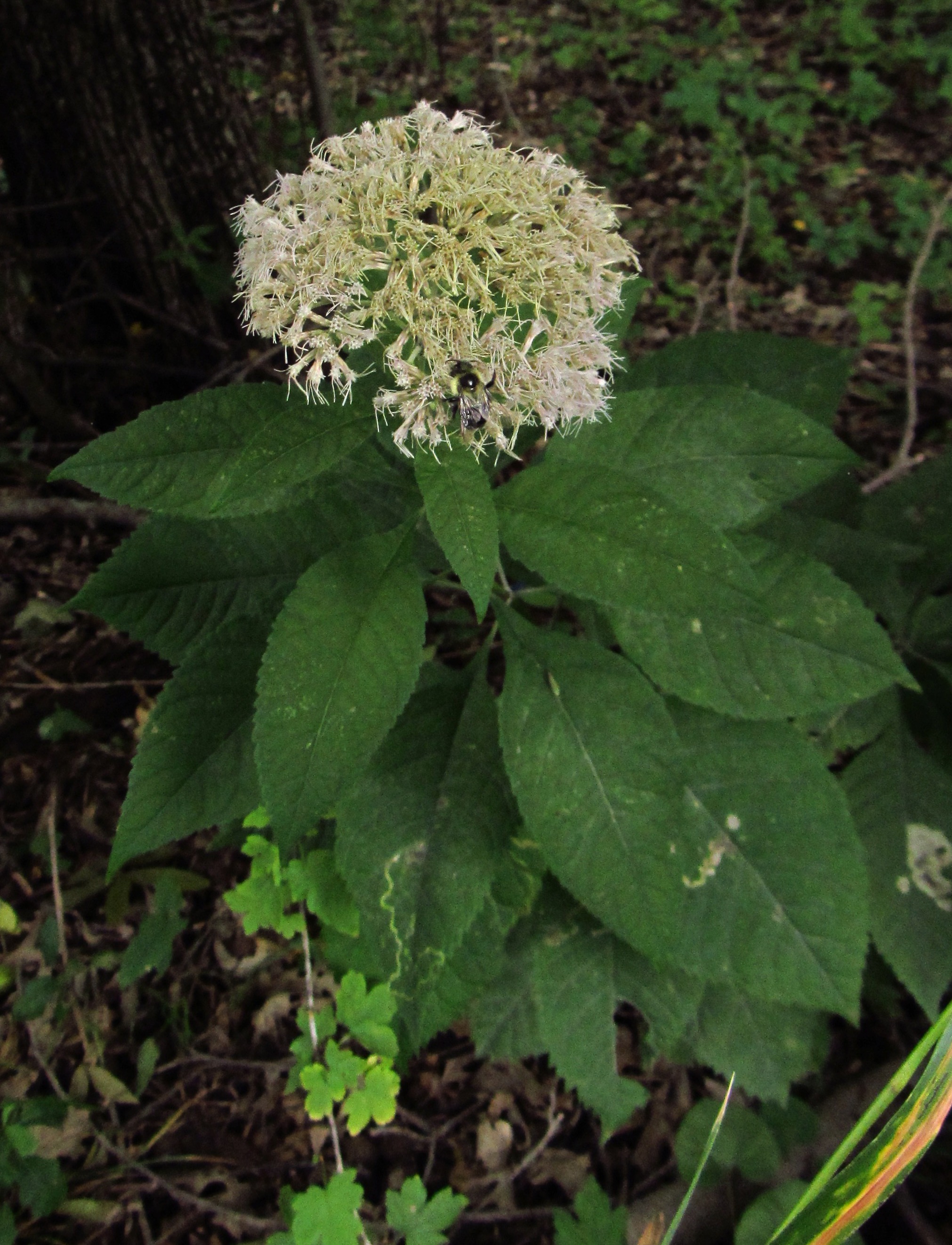 The white flowers to the right of the Sweet Joe-Pye weed are part of a white snakeroot plant that's mostly obscured from view. 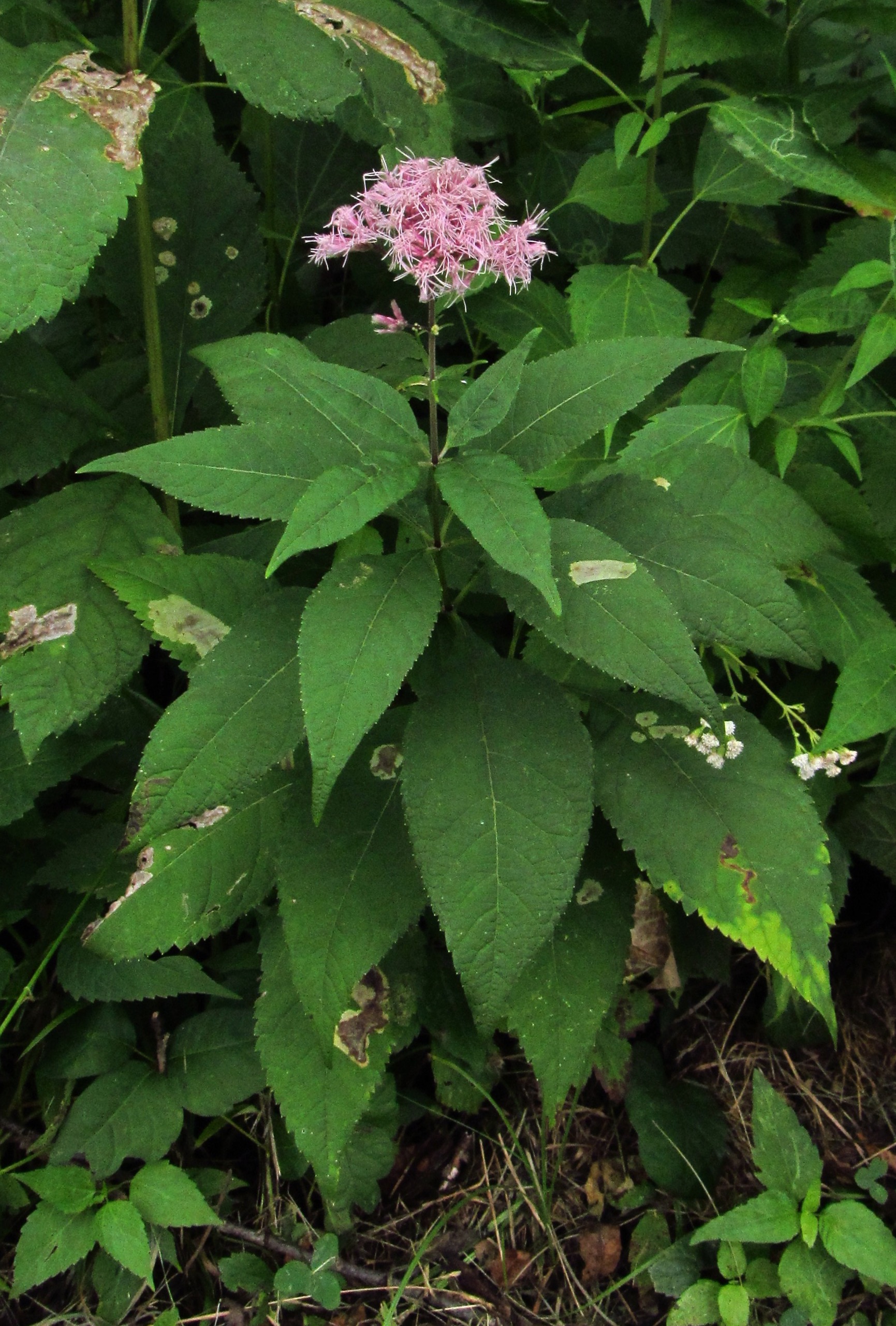 The clusters at the top of Joe-Pye weed plants have "dozens to hundreds of very pale pink to purplish flower heads." These are near the beginning of the blooming period. 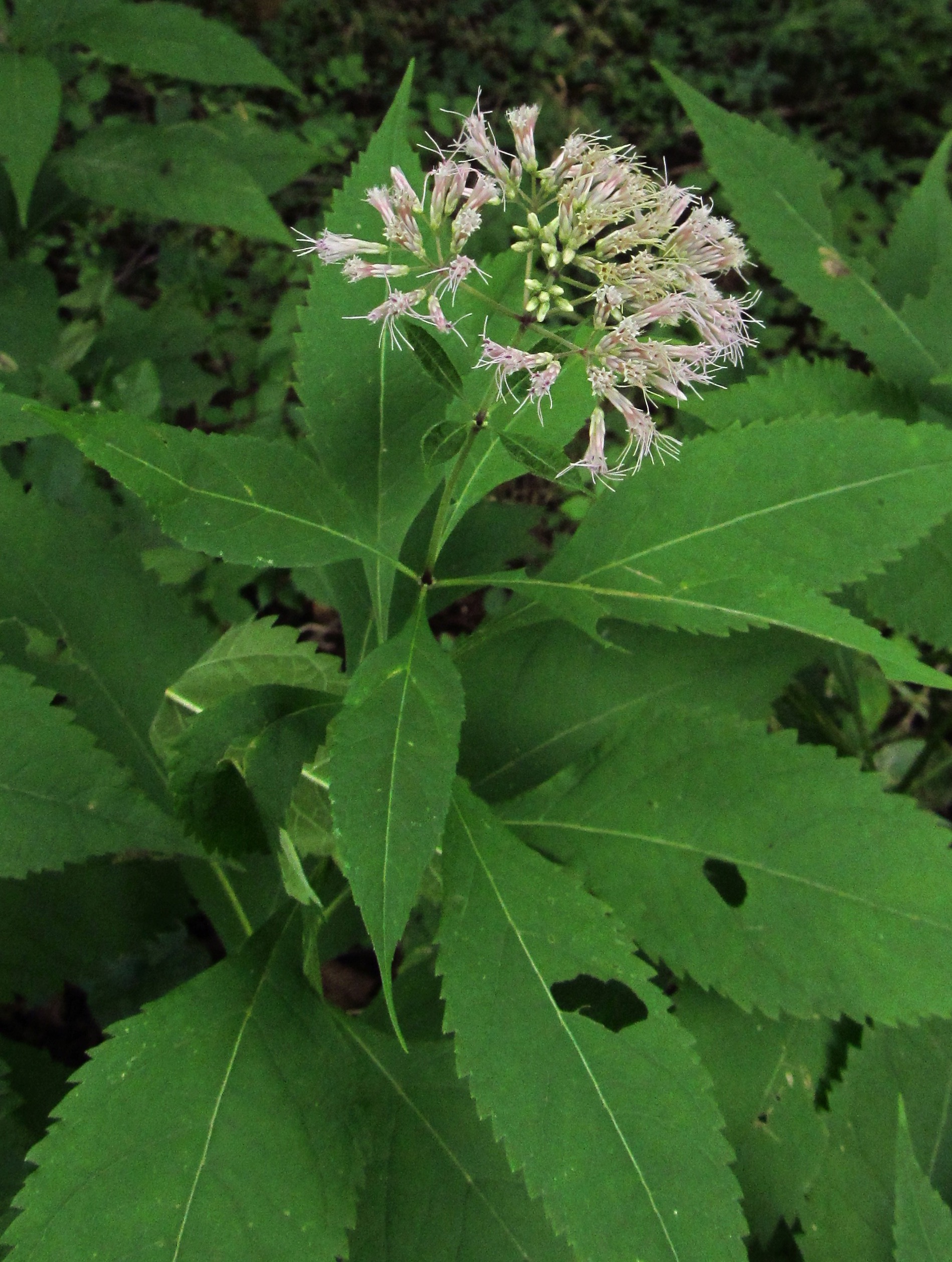 Some kind of bee is sampling the nectar here. 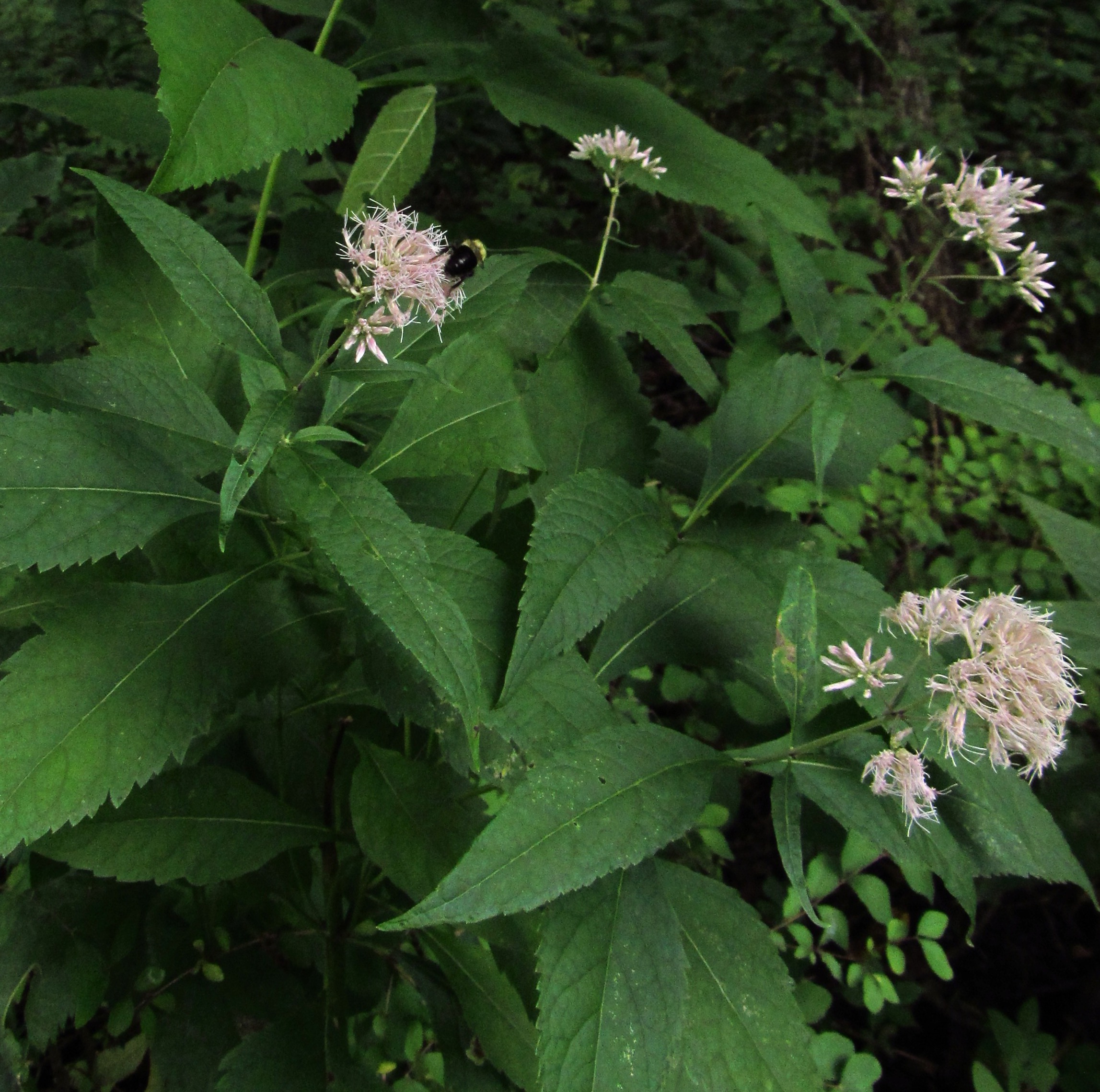 Note the domed shape of the flower clusters, which is typical for sweet Joe-Pye weed. 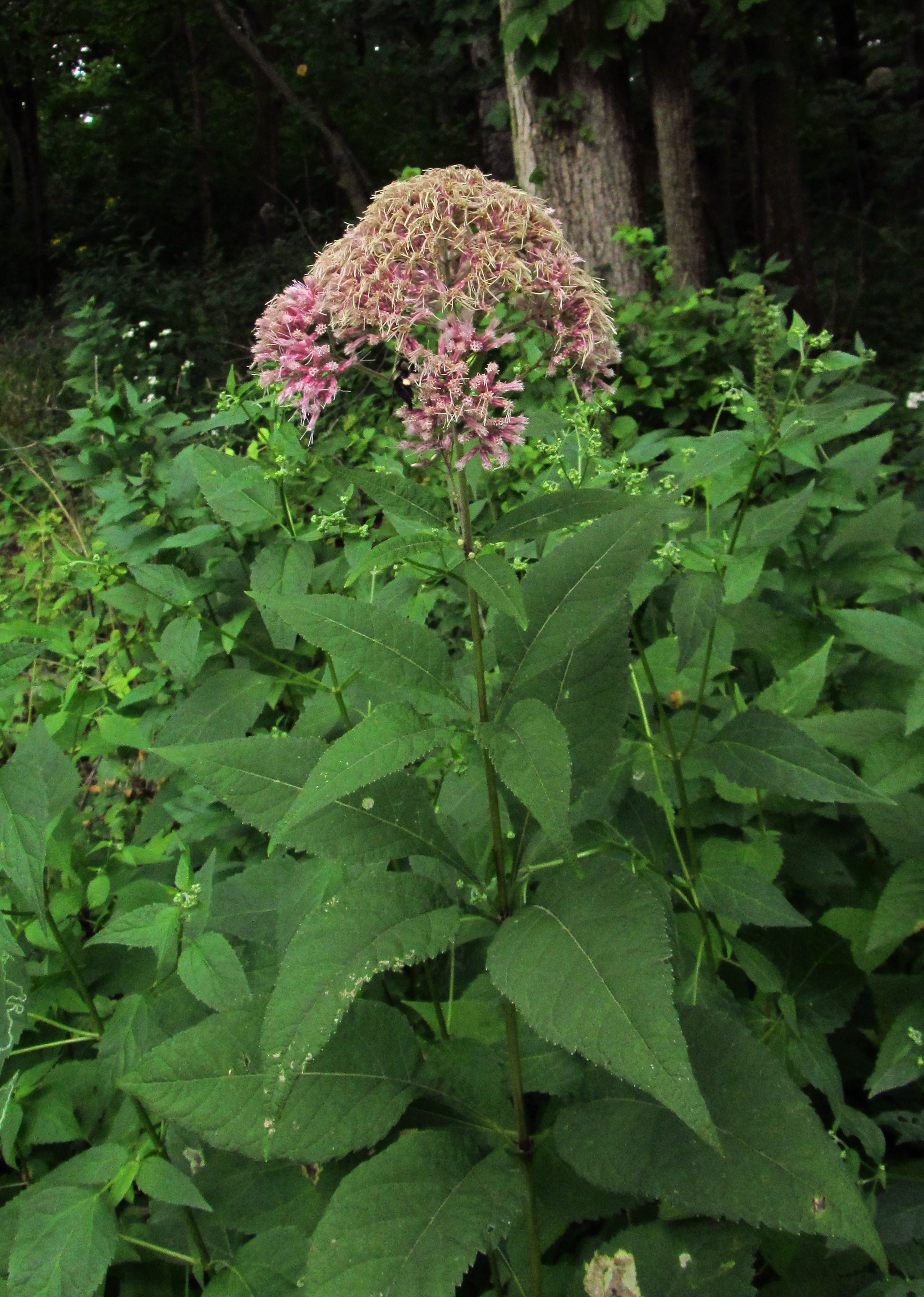 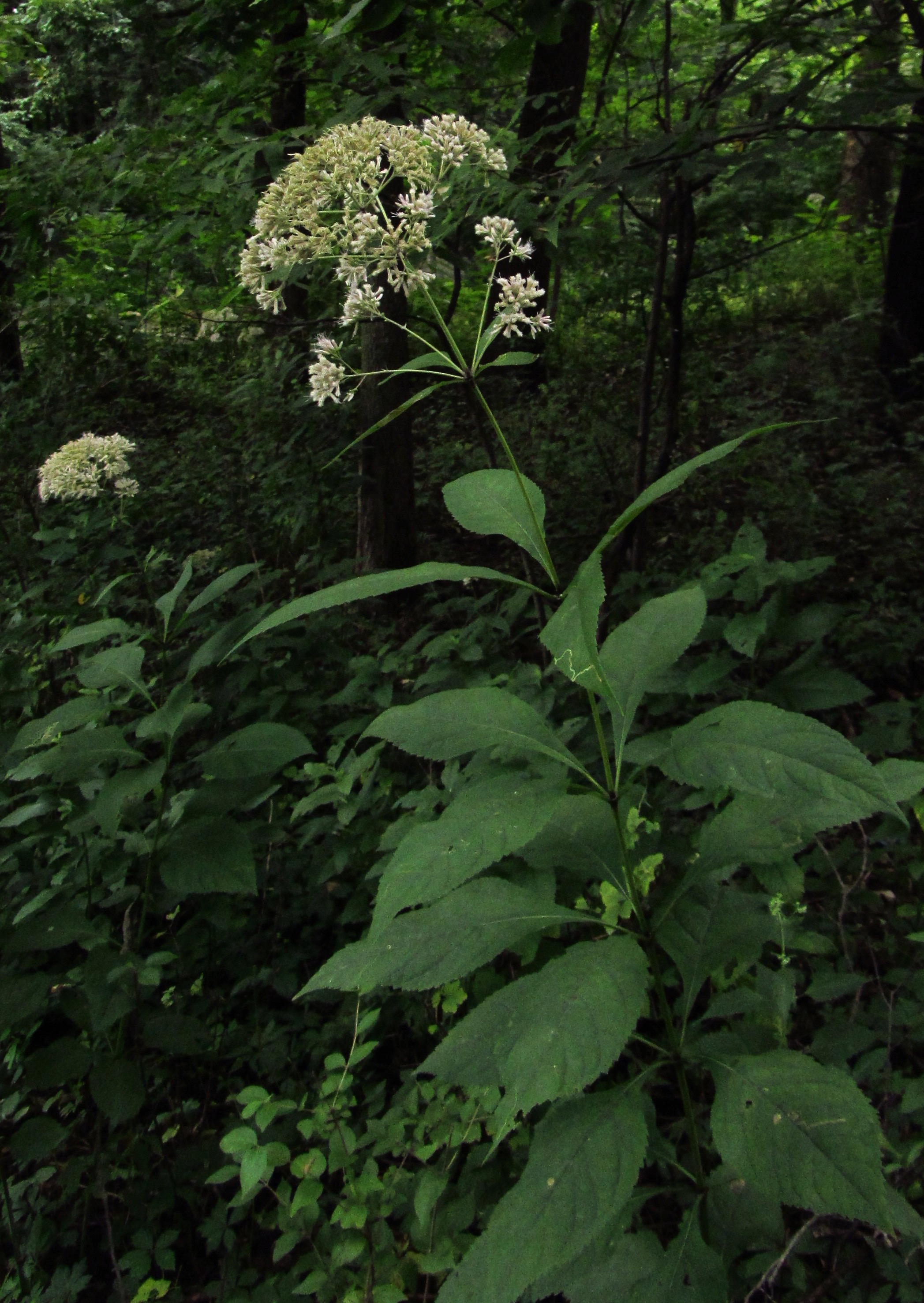 The plants to the right, which have finished blooming, are Canada or American germander, another common species on woodland edges. 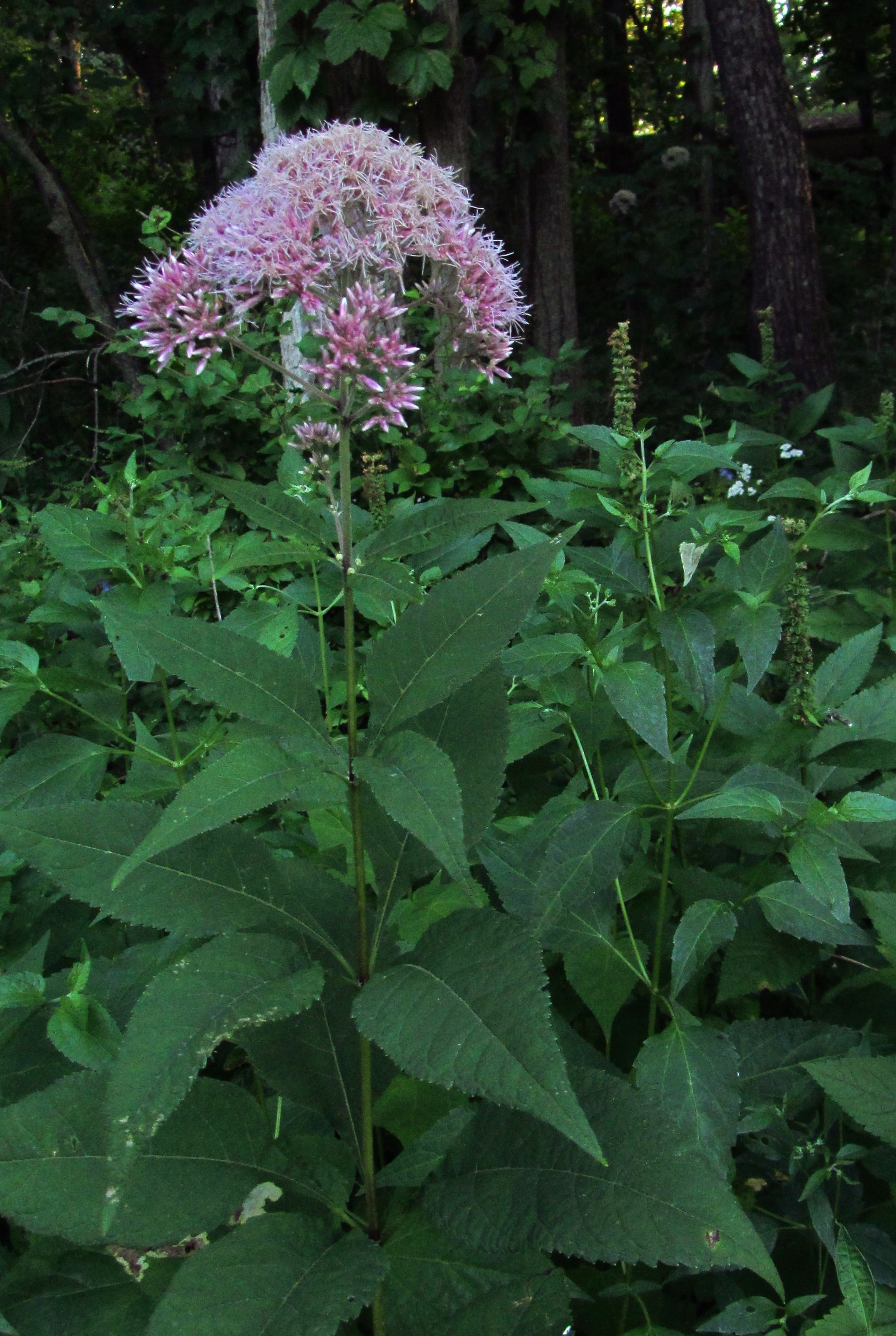 Some plants are almost growing sideways. 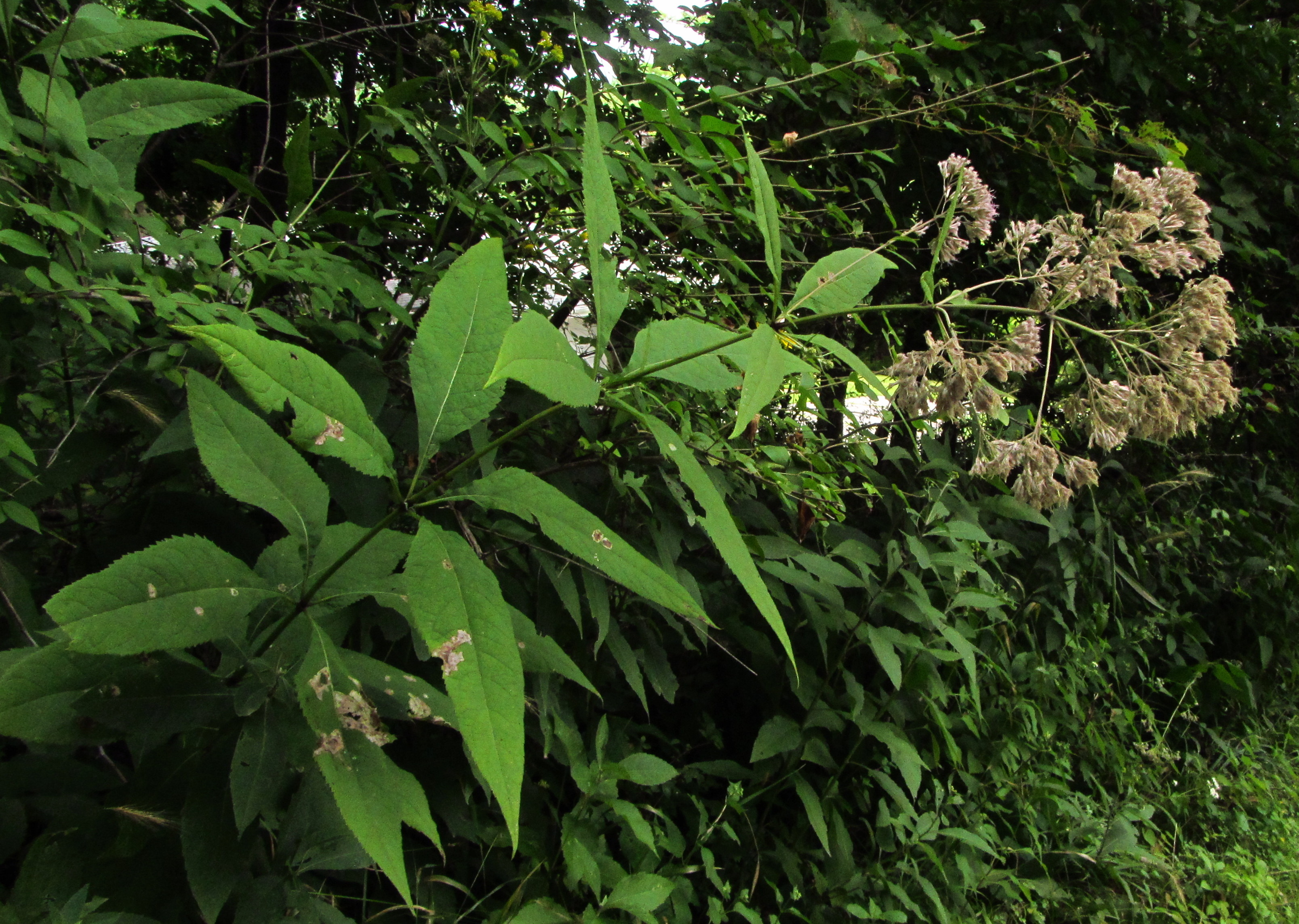 Several plants in this colony were well over 6 feet tall. 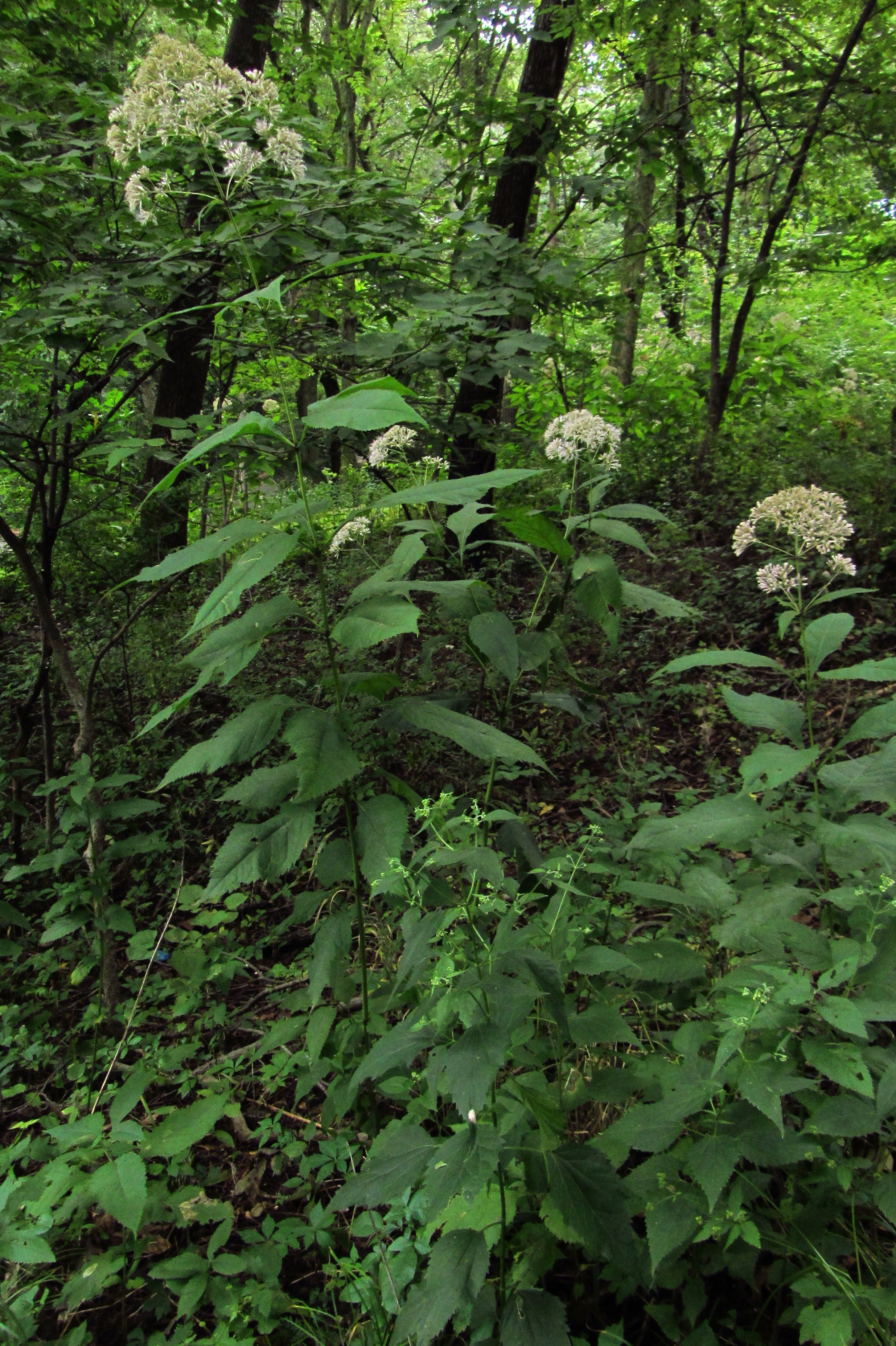 Eventually, sweet Joe-Pye weed flower heads "turn into a mass of brown seed, each with a tuft of light brown hair to carry them off in the wind," Minnesota Wildflowers writes. The process is under way in the last two pictures. 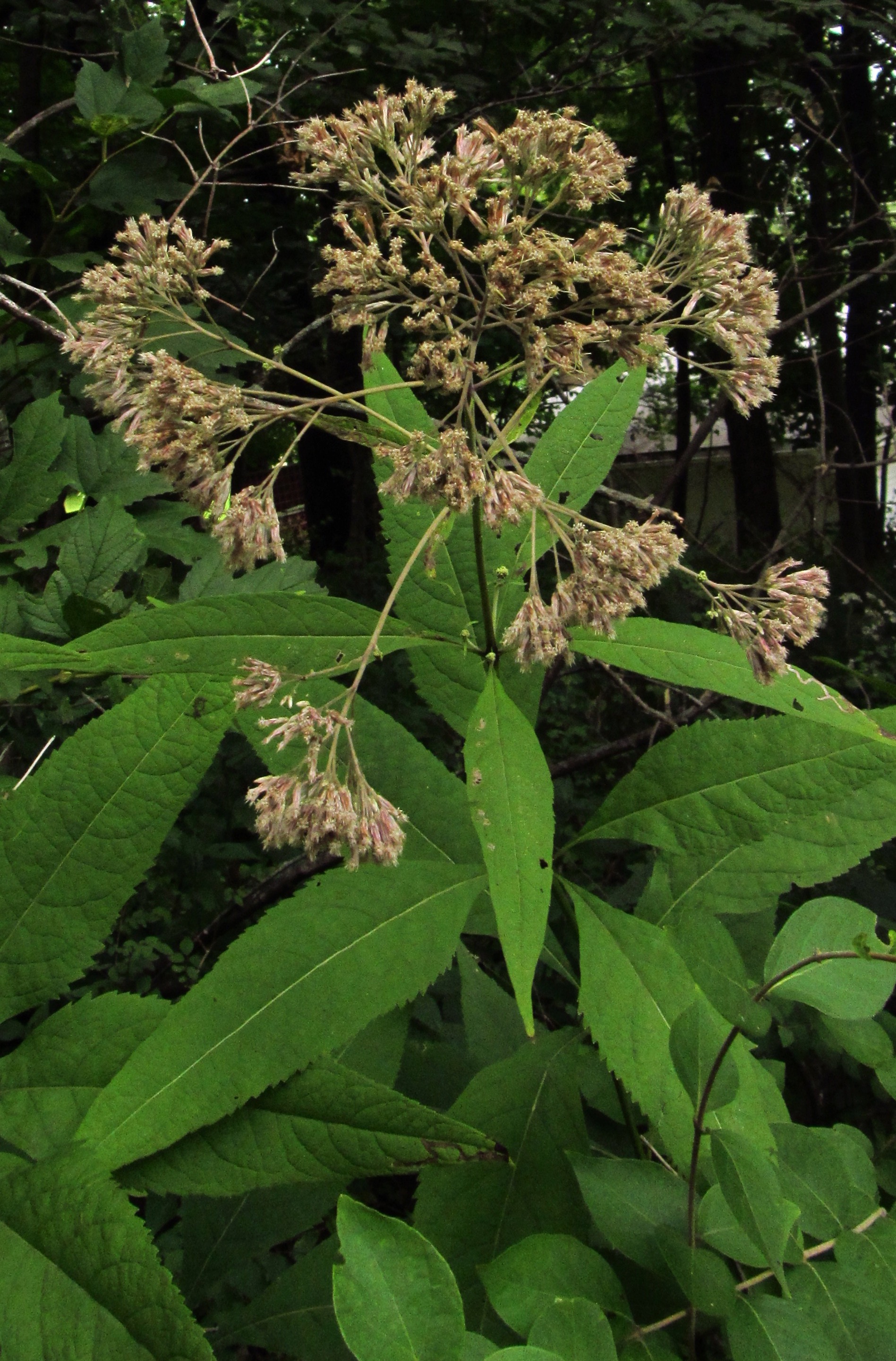 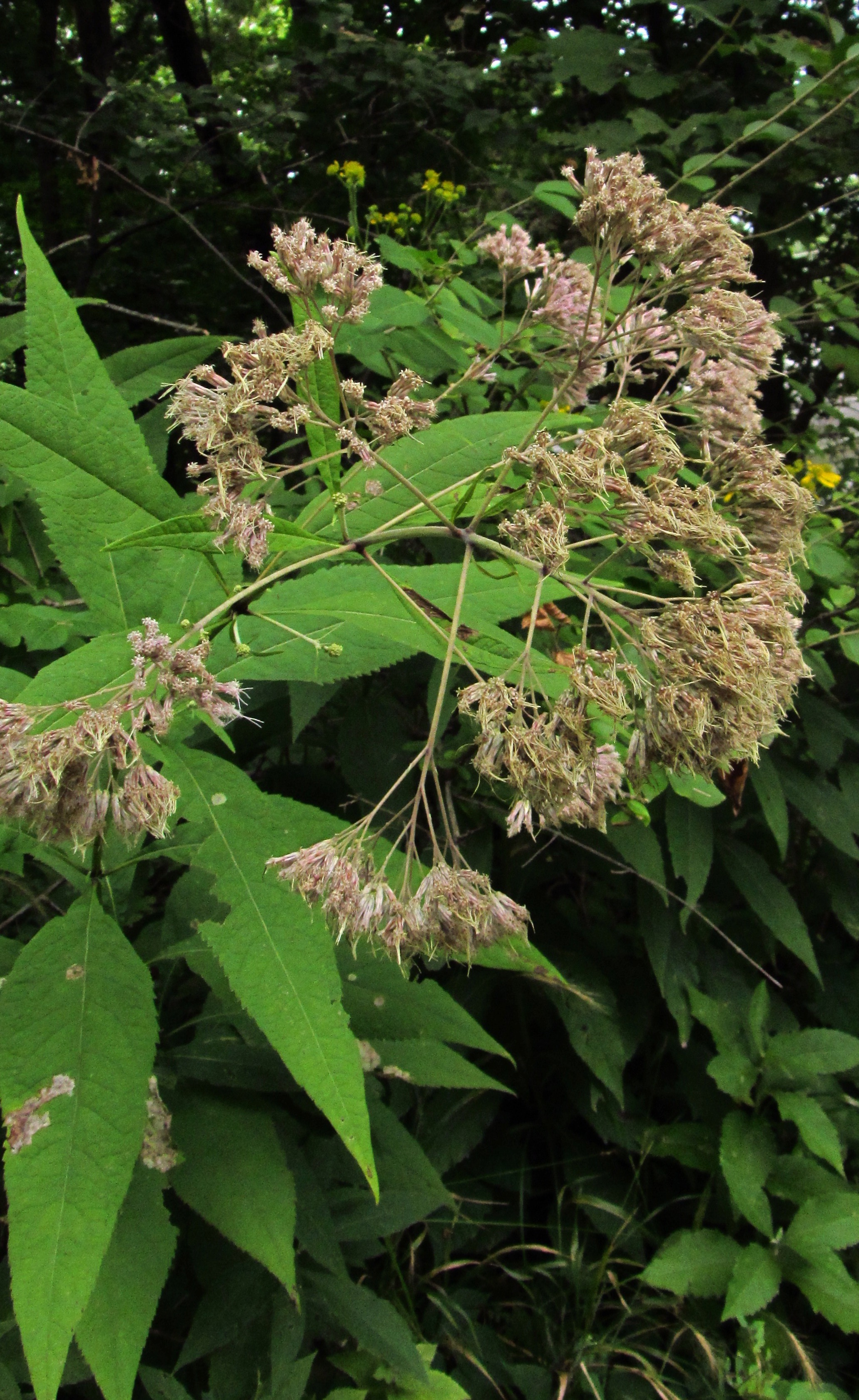