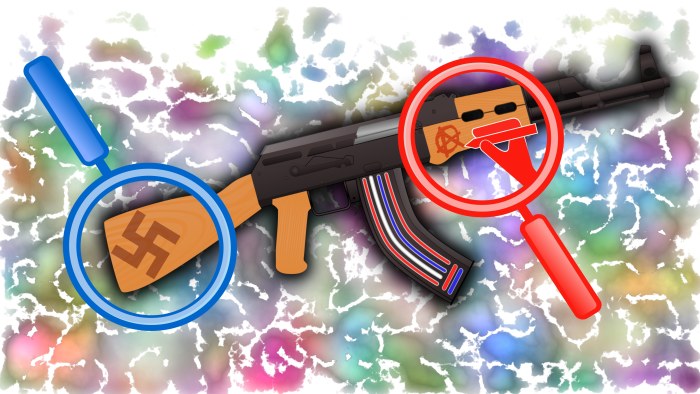 Nearly a month has passed since the country and world was yet again shaken by news of mass shootings in the United States. The shootings were so chronologically close to each other that our survival instincts want to forever link them in our memories.

Yet the two incidents are much more different than our evolutionary psychology would have us believe. While the wounds have hardly begun healing, these recent tragedies, now twins in our social consciousness, provide perfect case studies into propaganda and the social reaction to these events.

The two shootings, one right after the other, trigger our pattern-sensitive brains to search for similar causation. Social grief leaves us collectively asking “Why?” when events like this happen, driving our insatiable need to pick apart perpetrators to find our answer – the motive.

Many notions are explored to ascertain motive and compare the two events:

Collusion – Were these events coordinated/part of a larger event?

No current evidence exists linking the two shooters in any way to suggest any form of collusion, cooperation, or community.

Mimicry – Was an event emulating a prior event?

Ideology – Were the events encouraged by a similar idea or belief?

El Paso – Experts have determined that political ideology was a determining factor of the incident. Prior to the shooting, the perpetrator published a manifesto on the internet imageboard 8chan. Many sources found that manifesto to be laden with white nationalism, far-right conspiracy theories, and general anti-Latinx sentiment. The shooter drove more than nine hours from his usual residence in central Texas to the Mexican-American border town of El Paso, specifically to target the town’s high Latinx population.

Dayton – Experts have found no political or racial motive at this time. The perpetrator repudiated the white nationalism of the El Paso shooter, personally identifying with leftist politics (anti-Trump, anti-fascist, anti-ICE). His classmates and peers have suggested other possible motives, citing his hatred of women and desire to rape and murder. His former girlfriend has spoken of his severe mental health issues.

Suffice it to say, the two gunmen were ideologically opposite in many respects, and only one was motivated by ideology.

Demographics – Was some demographic similar between events?

In addition, both shooters lived in towns (Allen, Texas and Bellbrook, Ohio, respectively) in which individuals like them would be seen as most typical of someone in their age range.

Statistically, these shooters are consistent with a trend: perpetrators of such crimes are most commonly white cisgender males, regardless of which analysis one examines.

Planning – Did the perpetrators premeditate the event?

Both incidents show premeditation. The El Paso shooter posted his manifesto before the shooting and drove a considerable distance to commit the mass murder. The Dayton shooter utilized body armor, hearing protection, and a mask, obtained through a friend, and traveled at least a county with implements in hand.

The implements they used to commit the shootings, specifically the firearms, are both high-powered civilian rifles with close military variants. In El Paso, a WASR-10, a semi-automatic version of the AK-47, was employed, while, in Dayton, a pistol modified to emulate the AR-15, the civilian version and basis of the M16 rifle, was utilized with high-capacity magazines. These deadly firearms were likely selected due to their capability to cause mass casualties, a factor in premeditation.

Regarding planning, the autopsy of the Dayton shooter found alcohol, cocaine, and alprazolam (an anti-anxiety medication) in his system at time of death. The combination of these medications would have considerably affected his mental faculties in many possible ways.

The knowledge of the El Paso shooter’s anti-immigrant, anti-Latinx, and white nationalist manifesto was quickly found within a day of the shooting. Coverage on the popular right-wing outlet Fox News briefly touched on the manifesto, admitting early on that it existed. But the content was never discussed in detail, with Fox describing a “nexus of hate.”

The earliest mentions of white supremacy in Fox News headlines or article descriptions came when it targeted Democratic candidates on August 5 for calling out the Trumpian rhetoric, which has inflamed and emboldened white supremacists and other neo-fascists since the president’s 2016 campaign.

It was six days after the shooting on August 9 when Fox admitted the shooter targeted “Mexicans.” All-in-all, getting right-wing sources like Fox News to admit the right-wing ideology behind the El Paso shooting was like pulling teeth and, once forced, published very hush, hush and after the news cycle had mostly passed.

On August 6, Fox’s Dayton coverage claimed the shooter was “exploring violent ideologies” while validating his psychotic desires being the origin of his motive. The painting of the Dayton shooter was a violent left-winger had begun in earnest. The New York Post declared him “antifa’s first mass killer.”

This is because the Dayton shooter, a registered Democrat and self-identified leftist, had retweeted a few antifa-related tweets amid his usual feed. While his bandmembers informed Buzzfeed News that he mostly feigned progressive politics to mask his misogyny, the belief that the shootings were organized and committed by left-wing antifa members spread with the help of right-wing conspiracy theorists.

On August 7, Fox pundits and contributors published a segment claiming, with gaslighting, that Democrats and leftists were calling out the El Paso shooter’s ideology only because it was politically convenient. While no political or ideological motive has been found for the Dayton shooting, Rudy Giuliani claimed on the segment that it was inspired by “left” ideology.

If you go back through Fox’s article archive and compare the articles about El Paso and Dayton, you’ll find clear evidence the wording and presence of dedicated articles tends to downplay the El Paso shooter’s ideology, while focusing more on that angle when discussing the Dayton shooter.

Mainstream centrist sources like CNN are often derided by right-wingers for bias. Yet CNN listed all of the Dayton shooter’s influences and posts, including the smattering on Twitter, on August 5, the first day after the event. This was followed by Newsweek on August 6 and USA Today and Heavy on August 7.

That coverage belied accusations on RedState and on Natural News of a supposed “media blackout” or coverup of the Dayton shooter’s profiles. (This is not surprising, as both sources, while popular, are listed as factually questionable or outright nonfactual by aggregator Media Bias/Fact Check.)

Admittedly, some left or left-center sources (such as MSNBC or Huffington Post) declined to cover the Dayton shooter’s politics, as experts have repeatedly specified that it wasn’t a factor in the shooting. Yet many right-wing sources glossed over the El Paso shooter’s ideology, when it’s crystal clear that was a factor in the incident.

Determining what is relevant is inherently a subjective call and therefore may be influenced by ideological bias. The key difference is that fact-based sources will include that information when it’s relevant, even if it might go against some of their biases. This is because adherence to facts is part of the ideological bias of those who aren’t post-truthers, solipsists, or Pyrrhonist skeptics.

In these cases, however, we see a type of false equivalence – where the ideological motive of the El Paso killer is treated as equivalent to a mere ideological characteristic of the Dayton killer. In other words, when focusing on the politics of the two shooters, the “Why?” of El Paso and the “Who?” of Dayton are considered (falsely) on par by right-wing sources attempting to propagandize the events.

Granted, all sides have injected politics into both tragedies. Politics is socially-applied ethics, after all. However, the activism of left-leaning groups, which focus on societal trends of mass shootings in the United States is in no way comparable to the propaganda of right-leaning groups, which want to affix a false motivational basis to the Dayton shooter in the service of whataboutism, recruitment, and further propaganda.

Gwen Hope is a queer trans woman in her mid-20s who was born and raised in central Iowa. A diverse generalist, Gwen’s passion lies in writing, speaking, community education, and creative activism. Her writing and/or opinions are her own and don’t reflect those of any organization, corporation, group, or person she may or may not be associated with.

The article graphic (“American Koverage 47” by Gwen Hope) was made with public domain assets and author’s own work. This work is licensed under a Creative Commons Attribution-ShareAlike 4.0 International License.