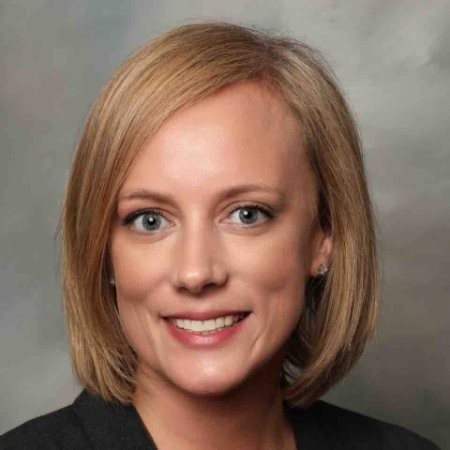 Service cuts to Iowans with disabilities under privatized Medicaid prompted a 2017 lawsuit, became a central theme of the 2018 governor’s race, and were a featured problem in an annual report from the state ombudsman.

Yet in a meeting with advocates last week, Governor Kim Reynolds’ health policy adviser said she is unaware of major problems for patients trying to obtain essential services.

The Arc of Iowa, a state chapter of a a “national community-based organization advocating for and with people with intellectual and developmental disabilities,” requested the meeting with Liz Matney. For more than three and a half years before joining the governor’s staff in June, Matney led the Iowa Department of Human Services bureau for MCO Oversight & Supports, making her the state’s top official overseeing the private insurers that manage care for nearly 700,000 Iowans on Medicaid.

Matney met with Arc of Iowa’s executive director Doug Cunningham, board chair Delaine Petersen (whose daughter has multiple disabilities), and board member Michael Wood on August 26. According to a news release from the organization, enclosed in full below, the representatives shared stories about people who have lost access to services or had those services reduced since Medicaid was privatized.

After discussion Liz indicated that she has had little communication from anyone regarding problems with services or other decisions regarding member health needs. She said she had no sense there was any major problems. This was a surprise to The Arc representatives.

Neither Matney nor communications staff for Reynolds responded to Bleeding Heartland’s inquiries about the August 26 meeting.

Democratic State Senator Liz Mathis, who has introduced a number of bills and amendments to improve oversight of the managed-care organizations, provided this comment.

Since the start of privatized Medicaid on April 1, 2016, providers such as the ARC have been in contact with DHS, IME [Iowa Medicaid Enterprise] and MCO representatives about troubles around services and payment. Ms Matney sat in several oversight meetings and heard complaints about sub-standard service, delayed payment and no payment.

Perhaps she is referring to not hearing complaints while in her new role with the Governor’s office over the last few months. If that’s so, then I would suggest providers, like the ARC, contact Ms. Matney directly. People who need help, whether a Medicaid member or provider, still contact legislators weekly to get problems ironed out or services applied. We will share those stories with her as well.

Ms Matney is now the ears and eyes for the Governor in regard to privatized Medicaid. If changes need to be made for the more complex health community, that responsibility clearly falls at the doorstep of the Governor. She should demand these MCO issues, that keep repeating, should be straightened out.

Members of the public can contact Matney through the mail (1007 E. Grand Avenue, Des Moines, IA 50319), by e-mail (liz.matney@iowa.gov), or by phone at (515) 725-2094. The grassroots organization Upgrade Medicaid is also collecting and sharing stories of Iowans adversely affected by service cuts.

Liz’s comments are disappointing. In fact, considering she worked in the Medicaid program prior to being hired by the Governor, it is amazing that she is unaware of problems. Unfortunately, I hear the same comments from Republican lawmakers. I’ve encouraged parents who contact me for help to also contact their senator and representative. Several have tried to do that, but have called or written back that their senator/rep did not return repeated calls or respond to their emails. […]

I do follow through and seek resolution on behalf of parents and their kids regardless of where they live in Iowa.

Providers, on the other hand, are fearful of retribution if they make waves.

Problems with privatization persist, especially for those with disabilities and their providers.

Jochum added that during the past year, she’s heard from Iowans who are having problems with Medicaid’s dental program. “The primary problem is that very few dentists have signed on with Medicaid and the provider list given to Medicaid members is inaccurate and outdated.” Jochum has asked DHS legislative liaison Carrie Malone and Iowa Medicaid Director Mike Randol to convene a meeting or teleconference with the two dental insurance companies and the Iowa Dental Association in order to identify and resolve the issues. However, she said,

Ignoring problems or denying the problem exists seems to be the modus operandi in this political climate. Those who suffer are those who rely on their elected officials to ensure that Medicaid works for children, ill elderly, and those with disabilities.

During last week’s meeting with the governor’s adviser, Arc of Iowa leaders suggested pulling “a population group needing long term care and supports” out of managed care, as part of “a test for alternative strategies that would result in better outcomes and satisfaction.” However, Matney “emphatically said this would not happen” and that Reynolds “was 100% behind privatization for all Medicaid populations.”

Iowa and Kansas are the only states that included the disabilities community when they privatized. Carving the disabilities community out of privatization would go a long way in resolving a majority of the problems. Problems run the gamut from unresponsive case managers to lack of local providers to delays and denials of care by the MCOs, to low reimbursement rates for providers.

Former DHS Director Jerry Foxhoven floated a carve-out soon after Reynolds appointed him. He told his agency’s Council on Human Services in September 2017, “We are examining patients that may not be the right mix” for managed care-companies to oversee, recognizing that “somebody who’s a quadriplegic and is on a ventilator, there’s probably not much you’re going to do to improve their health or bring costs down.”

Reynolds never pursued that idea, and to my knowledge, Foxhoven didn’t speak publicly again about putting patients with disabilities back into state-run Medicaid. Iowans needing Long Term Support Services are the smallest group of our state’s Medicaid recipients, but their care incurs the highest costs.

UPDATE: The Arc of Iowa released this statement in response to Bleeding Heartland’s reporting.

The Arc of Iowa Board of Directors and I would like to thank Liz Matney for taking the time to meet with us, listen to concerns over issues relating to the implementation of Managed Care and how it is affecting individuals with Intellectual and Developmental Disabilities. The Arc of Iowa is an advocacy organization that supports individuals with Intellectual and Developmental Disabilities and we have been hearing that their are many challenges in the system from our local members.

In response to the article in the Bleeding Heartland Blog, we would like to re-state our impressions of the meeting. We did not feel that Liz or the Governor were claiming ignorance to the issues but that they have not been hearing from families that their needs are not being met by managed care. Since the meeting we released a statement outlining what was said at the meeting and recommending how you can improve the system if you are not getting results after working with your Managed Care Provider.

We have found Liz to be responsive and willing to assist individuals with disabilities, families and/or care providers in finding results. We stand behind our press release and advocate that individuals who are not getting results through regular manage care channels reach out to Liz, your local legislator and advocacy organizations to support you in accessing the services that you need.

I still find it disingenuous for Matney to imply she was not aware that many Iowans continue to have trouble accessing the services they need.

Appendix: News release from The Arc of Iowa 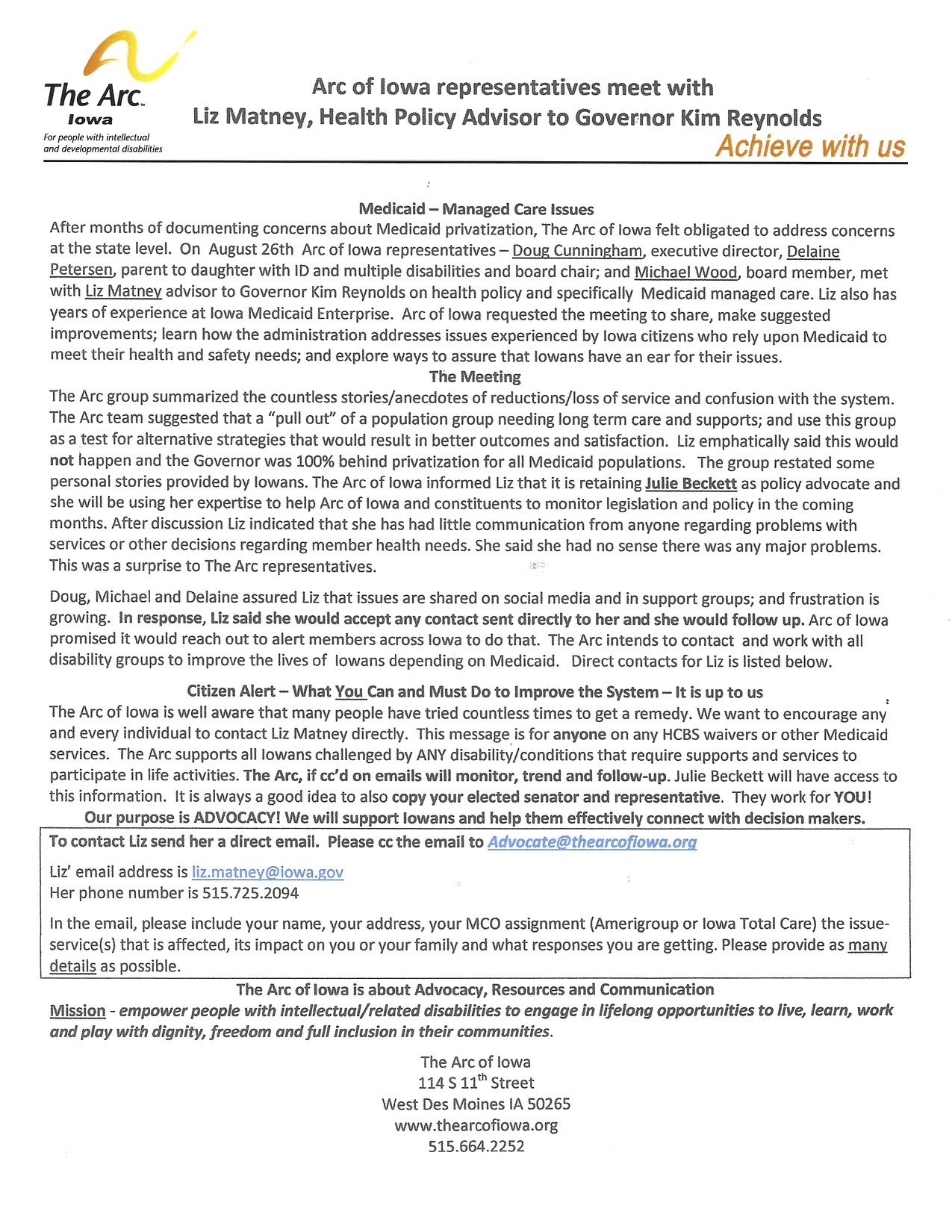