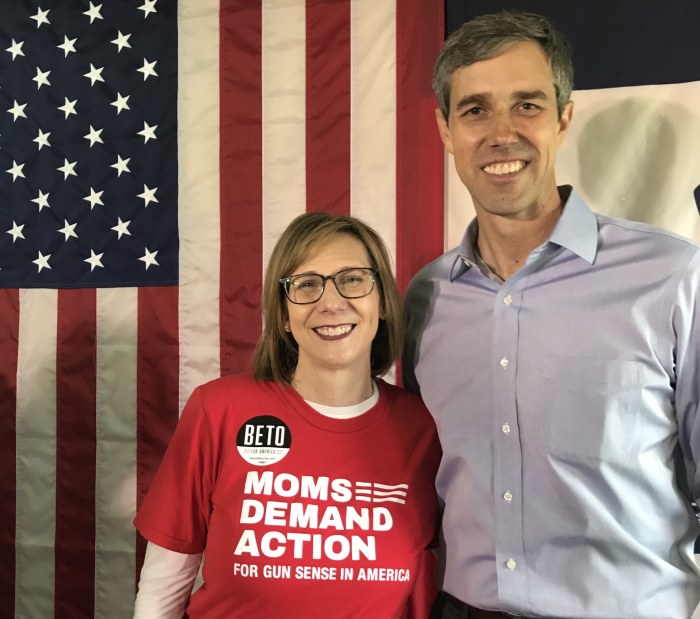 Why I'm with Beto: Keeping our families safe from gun violence

Teresa Schneider is a Democrat in Johnson County. -promoted by Laura Belin

It seems that almost every week, we hear of another mass shooting in America. That is not acceptable. As a mother of two college students who have been in close proximity to gun violence, I knew I could not sit on the sidelines and do nothing.

Over the past several months, I have done two things that make me feel I am doing something to address gun violence. First, I joined the Johnson County Chapter of Moms Demand Action. Second, I drove half an hour to Tipton in May to share my story with Beto O’Rourke, proudly wearing my bright red Moms Demand T-shirt. I shared my concerns regarding gun safety and asked him what he was going to do to address this critical issue.

Beto listened to my concerns and answered like a parent, not a politician. He talked about how his 8-year-old son Henry has had to participate in active shooter drills at school. I could feel he was sincerely concerned for not just his son, but all of our kids. He talked about how it is time to do what most Americans agree with and enact legislation that will lower rates of gun violence across the country. Beto outlined his support for universal background checks, enacting red flag laws and ending the sale of weapons of war.

I walked out of that room certain that Beto has a thoughtful and aggressive approach to tackling this life-or-death issue. He doesn’t take a dollar from any PACs and knows our families’ safety is not for sale. I became an active volunteer for Beto in Iowa City — making phone calls and knocking doors to spread the word about Beto in my community.

Since joining Moms Demand Action and speaking with Beto about gun safety in Tipton, several more mass shootings have occurred, including the death of 22 people at a Walmart in El Paso, Texas. Beto’s compassion and support of his hometown after this tragedy was inspiring and comforting.

Beto has since expanded his gun safety proposals, which specifically address how he will work to combat hate and violence in America. He would create a nationwide gun licensing system and registry, declare gun violence a public health emergency, and create a mandatory assault weapons buyback program. Weapons of war do not belong on our street and I’m glad Beto has a plan to buy them back.

These mass shootings have become too commonplace; too many of us are numb to them unless they directly affect us or our community. Enough is enough. The American people deserve a President like Beto O’Rourke who will finally tackle the gun violence crisis.

Top photo of Teresa Schneider with Beto O’Rourke published with the author’s permission.