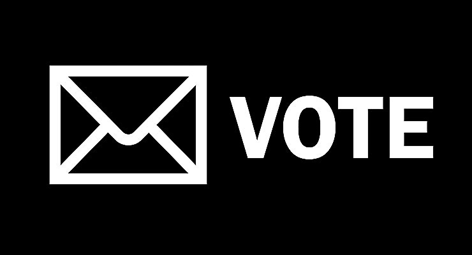 A 55-cent solution to a million-dollar problem

Tom Kinn is a letter carrier in Waterloo and is President of Branch 512 of the National Association of Letter Carriers. -promoted by Laura Belin

In the 2018 midterm elections, about 27 percent of all 118 million votes were cast by ballots directly delivered to the voter, according to PEW Research. Both PEW and the MIT Election Lab show the percentages growing every cycle. Soon, in-person voting on election day will be less than 50 percent of the total. Voting at home is growing steadily and exceeds early in-person voting.

Perhaps it is time for Iowa to have a more fully developed variant of our current, older system.

This is an era of deep concern over election security. There are demands for paper ballots, calls for investigations, and distrust of anything electronic. All systems need scrutiny to determine methods to best record voters’ choices. An examination of best practices is imperative. Where there have been problems with Vote at Home options, good solutions have been found. With so many examples available to learn from, a very good system can be implemented in Iowa which is both secure and time-tested.

Nationally, blue, red, and purple states are moving to put voters’ needs and convenience first. Five States (Colorado, Oregon, Utah, Washington) already use Vote at Home statewide. Hawaii will join them in 2020. California is on target for 2022. Nebraska and North Dakota have multiple counties using Vote at Home systems. Alaska, Maryland, and New Mexico are providing it for some municipalities. Iowa’s place on this spectrum is shown on the displayed map, created by the non-profit organization Vote At Home. 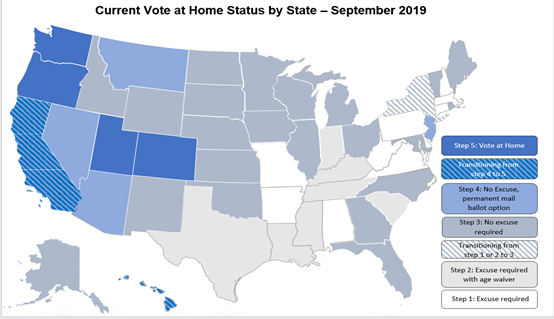 Currently, the Iowa Democratic Party is facing a dilemma. The Democratic National Committee changed rules following the 2016 election, including new requirements for states to provide opportunities for absentee participation in caucuses or primaries. Most states which had a caucus system switched to a primary for 2020. The only remaining caucus states are Iowa, Nevada, Maine, and Wyoming. Iowa must remain a caucus state or lose its first-in-the-nation status.

In an article for FiveThirtyEight, “A Virtual Iowa Caucus Would Have Been a Hacking Nightmare,” Maggie Koerth-Baker quoted Bruce Schneier, a security technologist and fellow at the Harvard Kennedy School of Government. “That would be a really, really, really, really bad idea,” Schneier said about the idea of using online registration and a dial-in phone number. “It would be insane to do it and expect it to be secure.”

Perhaps there is a 55-cent solution to the state party’s problem. The “virtual caucus” was only going to determine a small portion (about 9 percent) of state delegates. Why couldn’t the same formula be applied to a paper absentee ballot? The paper ballot could be a ranked-choice ballot, which would emulate the caucus viability process, minus the speechmaking. The resemblance to a true primary is slim.

A bonus for the party would be allowing campaigns to insert advertising into the voting packet. This would give them one last shot at convincing the voter and would help defray the costs of mailing absentee ballots.

Time is short, but these changes are inevitable. Voters are demanding choices. Choices which empower voters and strengthen democracy should be the bottom line for all.