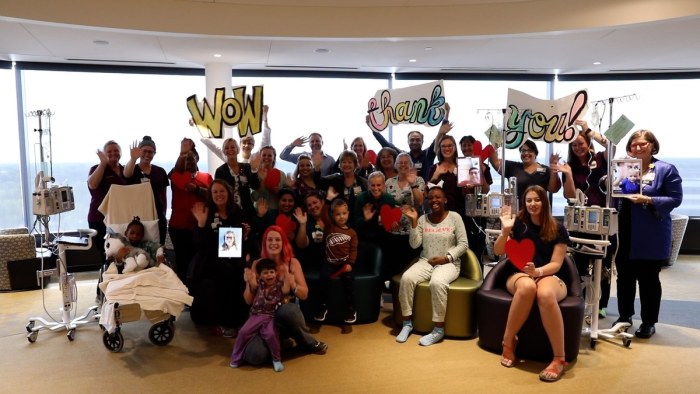 John Morrissey weighs in on the most talked-about news event in Iowa this week. -promoted by Laura Belin

Carson King, the accidental philanthropist who is about to drop a cool two mil into the bank account of the University of Iowa Hospitals & Clinics, deserves the right to name the top floor of the Stead Family Children’s Hospital* wing in Iowa City.

The top floor of the Children’s Hospital, located cheek to jowl with Kinnick Stadium, provides patients and their families a two million dollar view from which to view the action on the field when the Hawkeye football team plays at home. Football fans salute patients during each home game with “the Wave,” a gesture that delights those in the hospital’s aeire.

Of course, the refugees from the Ted Mack Amateur Hour who run the University of Iowa — and the Hospitals complex — won’t hear of such a naming right. The Board of Regents will pretend his gift never happened if the idea of naming the floor in King’s honor ever comes to their rheumatic attention. (This is the same bunch that never said a word as the hospital addition came in 25 percent over budget, opened grievously behind schedule and the owner’s inept management resulted in a judgments totaling $31 million in favor of two contractors.)

And I suppose there will be wackos who will bless me with all manner of threats for suggesting such a thing, especially in light of King’s acknowledged social media misdeeds nearly a decade ago when he was a teenager.

Still, he’s raised an impressive sum, and the U of I should offer him the right to name the top floor of the hospital wing as a show of appreciation, fair and square.

The 24-year-old Iowa State University fan and Prairie Meadows employee gained national notoriety with a hand-written sign asking for beer money. It started out as a sophomoric prank played just behind the set, but in full view of the cameras, for ESPN’s Game Day football preview show, beamed across the nation.

The response to his pasteboard message has astounded Iowans, a national television audience, the brewers at Busch beer, and the screen jockeys at Venmo. A tsunami of cash rolled in, which resulted in his decision to donate all funds in excess of the 12-pack he wanted to buy, to the Children’s Hospital. At last count, including the extremely generous matching grants announced by Busch and Venmo, the check will have at least six zeros on it.

Of course, once the ball got rolling on this deal, King didn’t have a lot of options about what to do with the money, if he wanted to avoid getting placed in the witness protection program. Look what’s already happened to him when an enterprising reporter searched his teenage social media account. But King’s heart has been in the right place all along, and his magnificent gesture to help the families served by the Children’s Hospital should be honored and memorialized by our state. Of course, the U of I Alumni Association should be offering him a big fat job as well, but that’s not going to happen.

That gray oval-shaped tower looming over the stadium already has a name, of course. It’s named after a guy who fled Iowa as soon as he got his diploma and thirty years later has two nickels to rub together. As Laura Belin noted in this space several years ago, naming rights for the tower were obtained for a $25 million donation, a modest sum in the rarefied air of institutional naming rights that so enthralls the moneyed class.

All I’m saying is that when an ordinary Iowan who caught lightning in a bottle with a prank sign manages to raise a tenth of that amount in less than 30 days, he ought to get some consideration.

No need to thank me. But you could send a check to the U of I Hospitals & Clinics with a note in appreciation of Carson King’s gift to our state.

*Note from John Morrissey: In the interests of disclosure, the author’s father taught and performed research in the basement of the old Children’s Hospital on Newton Avenue more than 40 years ago, before the physical therapy department was temporarily relocated to the Oakdale Campus north of Coralville. That move was done in anticipation of a new Children’s Hospital being built on the site of the old building. A parking ramp now occupies the former site, while the new wing that’s called Children’s Hospital is located on the other side of the hospital complex.