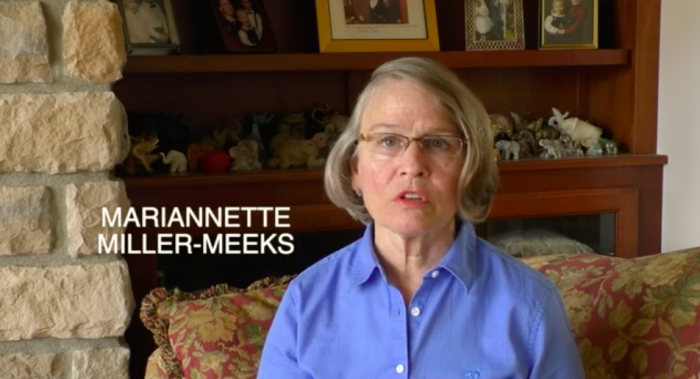 State Senator Mariannette Miller-Meeks made her candidacy in Iowa's second Congressional district official today after several months of "exploring" the race. The terrain is familiar to the GOP nominee who faced U.S. Representative Dave Loebsack in 2008, 2010, and 2014.

A few thoughts about her prospects in the Republican primary, where she will face former U.S. Representative Bobby Schilling, and a general election against likely Democratic nominee Rita Hart:

Miller-Meeks has accomplished a lot in her career. The launch video released today tells part of that story.

More background, from the official bio on Miller-Meeks' campaign website:

My father was a Master Sergeant in the United States Air Force who was forced to take up extra work, sometimes two or three jobs, to support our family. My mother, who did not have a high school education, also worked multiple jobs.

I originally dreamed of becoming a teacher because I loved school and wanted to share my passion for learning with others. However, in 10th grade, my younger brother and I were severely burned in a kitchen fire. While at the hospital, I was treated by a physical therapist who went out of her way to make sure I got better. This woman’s kindness and selflessness inspired me to become a doctor so I could help others.

I was the fourth of eight children and since my parents did not have the means to pay for college, I left home at 16 and enrolled in community college. I later enlisted in the United States Army at 18, where I served for 24 years as a private, nurse, and doctor (ophthalmologist or eye diseases/surgery). I went into private practice in Ottumwa in 1997 and have remained there with my husband, Curt. We have two grown children, Jonathon and Taylor. In 2010, Governor Terry Branstad appointed me as the Director of the Iowa Department of Public Health where I served for three years.

The other declared Republican candidate, Bobby Schilling, spent much of his adult life across the Mississippi River in Illinois. Miller-Meeks has practiced medicine in southeast Iowa for more than three decades and campaigned extensively in the IA-02 counties during three election cycles. She raised enough money for previous races to run television commercials in the media markets covering most of the district.

As a member of the Iowa Senate, Miller-Meeks also receives quite a bit of free media coverage in the Ottumwa area, which will continue next year.

Proven ability to do well in a Democratic-leaning area.

Although IA-02 leans Democratic, Miller-Meeks was able to make two of her races against Loebsack competitive. The Democratic Congressional Campaign Committee spent more than half a million dollars defending Loebsack in 2010 and again in 2014.

Democrats had a sizable voter registration advantage in Iowa Senate district 41, where Miller-Meeks defeated Democratic candidate Mary Stewart last November with just under 52 percent of the vote. In fairness, residents of that district had voted heavily for Donald Trump in 2016. Nevertheless, Democrats had high hopes for winning the open state Senate seat and strong early GOTV.

Three-time loser. While previous campaign experience is mostly a plus, there's no escaping the fact that voters have rejected Miller-Meeks three times. Granted, it's hard to defeat an incumbent in Iowa. But two of the years Miller-Meeks faced Loebsack, Republicans enjoyed landslide victories in other Iowa races. GOP primary voters may be looking for a fresh face in 2020.

The irony is that the best chance to take out Loebsack might have been 2016, when Republicans chose not to invest in IA-02. Miller-Meeks sat out that election cycle.

Limited opportunities to campaign during the legislative session. Miller-Meeks has won competitive Republican primaries before. But from January through April or perhaps early May 2020, she will be tied up in Des Moines on Iowa Senate business for much of each week. Keeping up a medical practice in Ottumwa will further restrict the time Miller-Meeks can spend appealing to voters who will decide the GOP primary.

Any comments about the IA-02 race are welcome in this thread. Although national forecasters still rate this district a toss-up, I see it leaning to Democrats for reasons discussed here. Click here for details on Democratic performance in the IA-02 counties in recent elections.