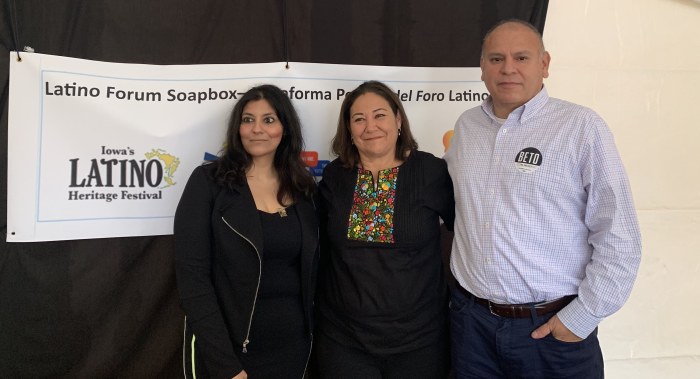 Beto O'Rourke is writing no one off, taking no one for granted

Emilio Escobar is a Lennox, Iowa resident and the brother of U.S. Representative Veronica Escobar of Texas. -promoted by Laura Belin

I have proudly called Iowa my home for the last ten years. It truly exemplifies the Midwestern values and rich agricultural history that I love. I grew up in El Paso, Texas along the U.S. — Mexico border, just like presidential candidate Beto O’Rourke. You’ll often hear him mention El Paso in his speeches, and more often than not, you’ll hear him use words like unity, diversity, shared beliefs, and common purpose – values he learned growing up there.

I just returned from visiting family in El Paso last month. The city was still reeling from the mass shooting in August, a topic of conversation everywhere I went. They’re proud of their native son Beto — for the way he carries himself in this campaign, to the way he consoled and led our native city. I count myself in that club, and it was an honor to speak on his behalf at the Latino Heritage Festival in Des Moines recently. Beto is the right choice for president because he writes no one off and takes no one for granted — no matter how different their views are from his.

I love engaging in conversation with people, and everywhere I go, I sense that people are afraid to share their opinions, especially if they carry political overtones. I’ve seen families literally divided over differences in political affiliation. This deeply saddens me — a country of shared common values, once espoused as the cradle of great debate, unable to engage in simple discourse. I hate to say it, but I blame our political leaders on every side who have forgotten how to bring facts and data to debates. We have many leaders who have forgotten how to listen to every side and see things from the lens of the opposition, and the value of compromise.

I followed Beto’s Texas Senate campaign closely and when he came to Iowa, I stopped by to listen to him. In the town hall, there were a few people from the other side of the aisle sitting in there. What was interesting to see was their demeanor — they seemed angry and wanted to share their feelings.

When Beto finished his speech, he gave time to the audience for questions. After some time, the people with obviously dissenting opinions got their chance. It was awkward at first, and everyone could sense an impending shouting match coming — including Beto. As a few boos and hisses started to emerge, Beto asked everyone to listen. He said it was important for him to hear everyone’s opinion. I valued that moment and the numerous times he continues to do that at every campaign stop.

The country is stuck in the mud. We need new leadership that values every voice, every opinion, and every perspective. We need a leader who is not bridled by the chains of special interest money, one who looks to the future and learns from the past. We need a leader willing to listen for a change, and I know that Beto O’Rourke will do just that as president.